Michael Avenatti adds another felony conviction to his resume

Con man Michael Avenatti is now a convicted felon.  It is not a surprise to anyone paying attention but it is a surprise to the folks at CNN and MSNBC who pushed Mr. Avenatti down America' throats and treated him as a hero and a potential U.S. president.

Hs is a convicted felon.  He is a twice convicted felon having been convicted in February of last year for attempting to extort Nike.  His latest conviction?  CNN reports:

Prosecutors alleged that Avenatti -- who helped negotiate the $800,000 advance for Daniels' October 2018 book "Full Disclosure" -- defrauded his former client by instructing her literary agent to send two of the installments of the advance totaling nearly $300,000 to an account controlled by him, rather than directly to Daniels, without her knowledge.
Speaking to cameras outside a federal courthouse in lower Manhattan Friday, Avenatti said he is "very disappointed" in the verdict.

CNN and MSNBC loved him:

The Media Research Center has determined that Avenatti made a whopping 254 television appearances over the course of a year. This, after he entered the news cycle in early 2018 as the outspoken lawyer for adult film star Stormy Daniels, who locked horns with President Trump and his former attorney Michael Cohen over an affair she claims to have had years ago with Trump.

Avenatti appeared most frequently on CNN, which welcomed him an astonishing 121 times. MSNBC also had a high tally, having him on 108 times. He made 24 appearances on broadcast news; 12 on ABC, seven on CBS and five on NBC.

Starting with this from Human Rights Watch:

The Kurdish-led armed force in northeast Syria should ensure the humane treatment of all men and boys it has evacuated or recaptured from a prison that the Islamic State (ISIS) assaulted and held for several days, Human Rights Watch said today. The regional fighters and US and UK forces supporting them should assess whether their forces complied with the laws of war during operations to recapture the prison and take all feasible measures to protect civilians during operations to find ISIS members and escaped detainees.

ISIS fighters assaulted al-Sina’a prison in the Ghweran section of al-Hasakah city on January 20, 2022. The Kurdish-led armed force, the Syrian Democratic Forces (SDF), said it regained full control on January 30 following a battle backed a US-led coalition against ISIS that left more than 500 people dead. The prison held about 4,000 male ISIS suspects or family members, including 700 boys, most from Syria and Iraq and the rest from dozens of other countries. The foreigners had been unlawfully detained in dire conditions for nearly three years.

“The Syrian Democratic Forces began evacuating men and boys from the besieged prison days ago, yet the world still has no idea how many are alive or dead,” said Letta Tayler, associate crisis and conflict director for Human Rights Watch. “The detaining authorities in northeast Syria should end their silence on the fate of these detainees, including hundreds of children who were victims of ISIS.”

The SDF should immediately allow international humanitarian groups to visit the detainees it has evacuated or recaptured from al-Sina’a prison and provide them with essential care. They should make public how many detainees, including children, were killed, wounded, and evacuated during the battle to retake the prison.

The US-led coalition against ISIS said the detainees were being held at a more secure facility, which two sources told Human Rights Watch was a new, UK-funded prison near al-Sina’a. About 300 detainees were transferred on January 24 to Alaya prison in the city of Qamishli, the Rojava Information Center told Human Rights Watch, but it was not clear if they remained there.

As noted in Monday's snapshot:

I'm appalled by the report for anothe reason.  NPR wants you to know that, in Syria, the [prison] seige was carried out in part by holding children.  No one takes a moment to decry children prisoners.  No one takes a moment to call out children being in the same prison as adults.  It's just move on and skirt every damn issue in the world but pretend that somehow, for a few seconds this week, you covered Iraq and Syria and did a segment that didn't find the hosts chuckling at the end.  ("We haven't heard what happened to the children . . . We don't know how many died," Sarah declares.  Alright then.  Thanks for the information -- or whatever you want to call that.

It's outrageous and that an AP reporter thought it was acceptable to offer as an after thought ''we don't know how many died"?  That is the heart of the story.  Not the prison break itself but that children were in that adult prison and that children died.  You're wasting everyone's time on nonsense otherwise.

The White House issued the following:

Last night at my direction, U.S. military forces in the northwest Syria successfully undertook a counterterrorism operation to protect the American people and our Allies, and make the world a safer place. Thanks to the skill and bravery of our Armed Forces, we have taken off the battlefield Abu Ibrahim al-Hashimi al-Qurayshi—the leader of ISIS. All Americans have returned safely from the operation. I will deliver remarks to the American people later this morning. May God protect our troops.

This is BS. Poll numbers dropping, Ukraine hoax stalled, 2,000+ covid deaths per day. What to do? Easy. Find an Arab, claim he was an ISIS leader and kill him and his family. Later the story changed to say he blew himself up. Don't believe that either. #Bogus

This is how bad things have gotten for Joe Biden, he's aping Bully Boy Bush and hoping that somehow this helps him look good.

ISIS is not followers with one mighty leader.  ISIS exists to be a headless snake.  Is the White House not getting that reality or are they hoping the American people are too stupid to grasp it?

Joe can't deliver and he's grasping at anything.

For survivors of the Islamic State massacre against Iraq’s long-persecuted Yazidi minority, the death of terrorist leader Abu Ibrahim al-Hashimi al-Qurayshi brought some relief but little solace. More than seven years after al-Qurayshi oversaw a genocide against the Yazidis, countless other IS members go unpunished.

“There is more that must be done,” Yazidi activist and Nobel Peace Prize laureate Nadia Murad said in a statement.

“The international community’s apathy towards these atrocities had left the community with little hope for justice and accountability. Until today,” she said.

President Joe Biden announced on Thursday that al-Qurayshi, also known as Hajji Abdullah, was killed during an overnight raid carried out by US special forces outside the northwest Syrian town of Atmeh. The reclusive IS chief died after detonating a bomb inside his residence that also killed his wife and children, US officials said.

Killing chilrend in a bombing?  Targeting the wife?  It's easy to say, "That's gangster policy."  But, truth is, even the mafia shows more restraint and respect.
So if another country wants to go after Joe Biden?  Jill Biden and Hunter and Dasher and Vixen were all killed in an attack on Joe, that would be okay?
No, it wouldn't but when the US acts in this manner, it's breadking the rules and its losing any high ground.
Who did Abu's children kill?
How old were they?
Press reports say six children were killed.
Joe Biden declared, "The horrible terrorist leader is no more."
Were the six children "horrible terrorist leader[s]" as well?
This should bother everyone.  It should especially trouble Americans.  The US military actions overseas keep drifiting back domestically -- not just weapons but also tactics.
So children are now targets.  There is no justice, just vengeance and destruction.  That's Joe Biden's America.
We should all be appalled.
Sarah Abdallah Tweets:
Joe Biden's "counterterrorism raid" has killed 13 people in Syria, including six children and four women. Liberal media applauds this as "bravery".
8:21 AM · Feb 3, 2022

The United States kills the same terrorists that it created and funded in the first place. This is how it keeps perpetual war going and raking in profits for the weapons manufactures. There is nothing “brave” about slaughtering countless civilians in Syria, Iraq and Afghanistan.
8:38 AM · Feb 3, 2022

It was on Monday afternoon when Duhok police received a call informing them of the location of the body of a trans woman, murdered by her brother three days previously. By the time the police arrived at the corpse, the killer had long left the country. Another person had fallen victim to honor killing.

The call to the police came from a man who identified himself as the victim’s brother, explaining that another brother had killed his trans sister and left her body in the village of Mangesh, around 20 kilometers north of Duhok city center.

When police forces arrived at the scene of the crime at around 3:00 pm, they found the body of 23-year-old Doski Azad, a transgender woman, shot twice in the head and the chest.

The tragedy began for Doski when her long-gone brother Chakdar Azad returned to the Kurdistan Region over two weeks ago.

For Doski, who had left her family home over five years ago, her brother’s arrival in Duhok would have felt the same as the numerous threats she had received from her family over the years.

“She left the house five to six years ago, I had not seen her ever since,” Doski’s uncle Dlovan Sadiq told Rudaw English on Tuesday. “Doski made a mistake.”

Living in Duhok as a transgender woman was not easy for Doski. While she had established her own life over the years, working in a salon at Duhok’s Masike neighborhood and living her life as a woman, threats came thick and fast from her family.

23 years old transgender Doski Azad from Duhok- #Kurdistan Region was killed by their brother who lives abroad. According to local reports their brother solely came back to kurdistan to murder Doski because of his gender change. 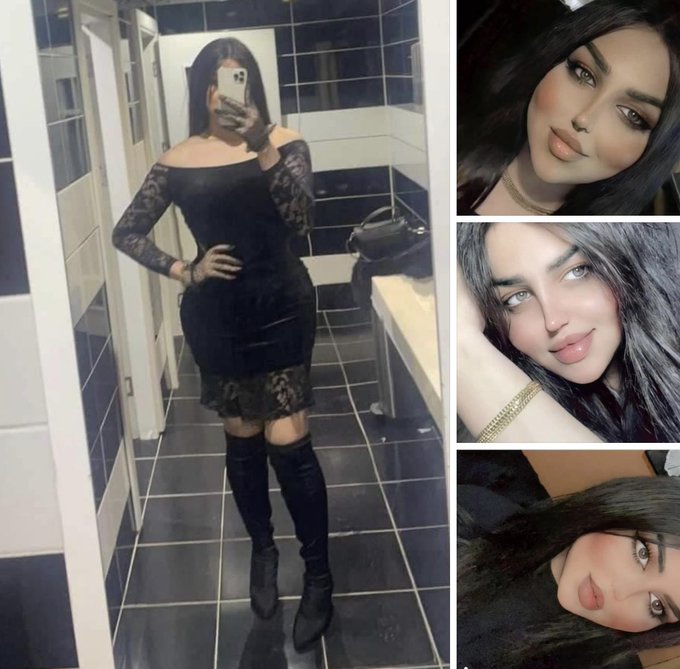 #DoskiAzad was a human being and was murdered for being human.
@mklavers81

PLEASE HELP US AMPLIFY THIS STORY BY SHARING HER STORY/PICTURE OR THIS POST WITH THE FOLLOWING: #JusticeforDoskiAzad #SayHerName #WeWouldNotBeErased Her name is Doski Azad, a make-up artist who was murdered in a so called 'honour killing' by her evil brother, Chakdar Azad! 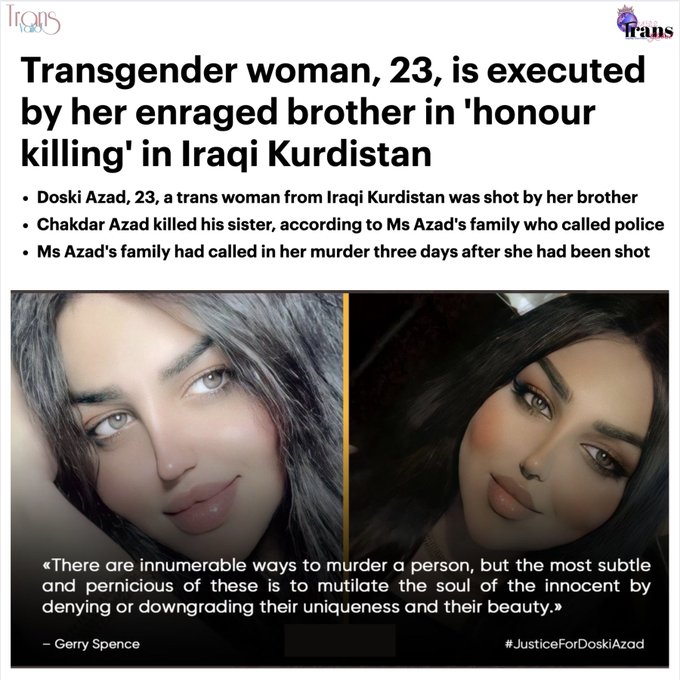 Violence is all over.  You just have to marvel over the hate expressed -- whether it's a US president killing children or a brother killing his own sister.

What did he think he was doing when he murdered her?  Did he think he was 'saving' her?  How much hatred did he have inside himself to kill Doski?  Like many victims, she had taken herself out of the orbit of those who could hurt her.  She'd restarted her own life elsewhere which had to have been hard for her.  But even that wasn't enough.  The family wouldn't accpet her and even her moving away wasn't enough.  The hatred was so intense that nothing would ever be enough.  So she was killed.

Her murder, the murders of those children?  I don't see a lot of difference.  Innocent people should not be targets.  That should be the no-brainer.  In a better world, maybe it would be.