Ms. Pelosi is an anti-democratic embarrassment

Exactly.  Speaker of the House Nancy Pelosi is trying to get people behind the push for no debates.  Why?  Because Joe Biden is a dithering fool and will come off like one on stage.

There is no love of democracy nor any push to foster it.

There is only lying and conniving on the part of the likes of Ms. Pelosi.

Monday, August 31, 2020.   Question: Why do we need multiple outlets when they all 'cover' the same story and all miss the topics that are actually news?

Yesterday was an important day globally.  I'm finding only one article in English that was published in the last 24 hours about The International Day of Victims of Enforced Disappearances and that's at RUDAW -- the English language version of Iraq's Kurdish news outlet.

That's it for English language outlets.

This is a pretty damn important topic, it's a global topic, it matters.  And yet not one word on it from the US corporate media.  And in the alleged 'alternative' media?  I see the Trump garbage at COMMON DREAMS -- that's really all they offer these days -- that and articles that try (but fail) to excite people about Joe Biden.  Whores like Missy Comley Beattie can show up -- such White privilege -- to wring their hands over how -- in November! -- they're going to have to vote for Joe and you should too.  They can do that in August.  They just can't cover the disappeared.

The number of the disappeared only increases

No circumstance can justify someone's disappearance.

Sunday is the International Day of Victims of Enforced Disappearances. https://bit.ly/2Ql9R45

The United Nations Tweeted that yesterday.  Today is the International Day of Victims of Enforced Disappearances.  In previous years, countries like Argentina came to mind (under the tyrant and criminal Augusto Pinochet) came to mind.  Sting wrote and recorded "They Dance Alone" about the disappeared in Argentina on his 1987 album . . . NOTHING LIKE THE SUN.

Because some days it seems like no one gives a damn except BRussels Tribunal.

The crime of enforced disappearance is rife across the world.  We see new cases almost daily, including the disappearance of defenders of the environment, who are often indigenous peoples.  Meanwhile, the excruciating pain of old cases is still acute, as the fate of thousands of disappeared people remains unknown, making the crime a continuous presence in the lives of the loved ones of the lost.

The United Nations Committee and Working Group on Enforced Disappearances have identified additional worrying trends, including reprisals against relatives of the victims and members of civil society, often in the name of security and counter-terrorism.  Enforced disappearance also has gendered consequences particularly affecting women and LGBTI persons.

Impunity compounds the suffering and anguish.  Under international human rights law, families and societies have a right to know the truth about what happened.  I call on Member States to fulfil this responsibility.

With the support of international human rights mechanisms, States have a duty to strengthen their efforts to prevent enforced disappearances, to search for victims, and to increase assistance to victims and their relatives.  It is equally critical to pursue credible and impartial judicial investigations.

On this International Day, let us renew our commitment to end all enforced disappearances. I call on all States to ratify the Convention for the Protection of all Persons against Enforced Disappearances and to accept the competence of the Committee to examine individual complaints. This is a first, but crucial step, towards the elimination of this atrocious crime.

Sadly, the disappeared exist around the world.  Our focus is Iraq so that's what we're zooming in on.

The ICRC in Iraq Tweets:

Thousands of families of missing still live in ambiguity as they seek answers on the fate of their loved ones who went missing in #Iraq as a result of four decades of conflicts. We remember them today on the International Day of Disappeared.

Iraqi Families of Missing: The wounds that do not heal
In Iraq, decades of successive conflicts and periods of violence have led to one of the highest numbers of missing persons in the world. Hundreds of thousands of individuals remain unaccounted for,

Each conflict in #Iraq has resulted in a new generation of disappeared, putting Iraq among the countries with the highest number of #MissingPersons. Families of up to a million people are waiting for answers #DayoftheDisappeared #TheSearchMustGoOn

More than a million absentees in Iraq don't know their fate, for years. families of disappeared are tired of waiting without hope. state of militias has killed , kidnapped, in the name of religion. human rights and United Nations must reveal the fate of these people. #وينهم

#UN mission to #Iraq calls for independent probe to find whereabouts of 1,000 Iraqis who disappeared in #Anbar #BaghdadPost #Iraq 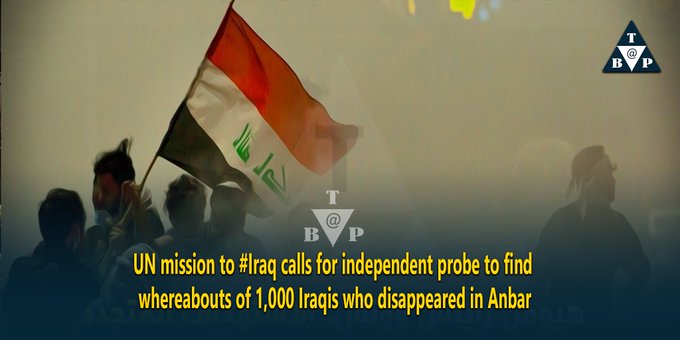 U.N. calls on Baghdad to investigate the fate of 1,000 civilians disappeared in Anbar https://bit.ly/34Tfy1s #Iraq #forceddisappearances

Years passed and the file of the forcibly disappeared in Iraq is still being raised from time to time without any government treatment or disclosure of their fate despite repeated requests from the Sunni and popular political forces from their families, #وينهم

#Iraq: UN report on #EnforcedDisappearances calls for independent/effective investigations to establish the fate of 1,000 civilian men and boys disappeared during military operations against ISIL in #Anbar in 2015-2016 and to hold perpetrators accountable 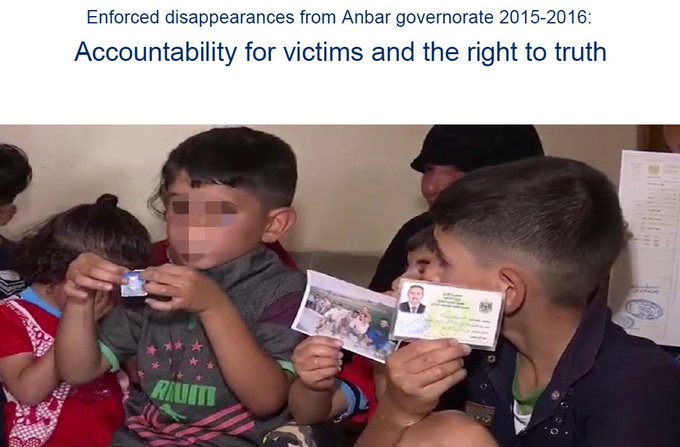 At the time of the abuses,
@hrw
wrote about the hundreds of men from Saqlawiyah, from al-Mahamda tribe that were tortured, disappeared in 2016 https://hrw.org/news/2016/07/07/iraq-fallujah-abuses-inquiry-mired-secrecy 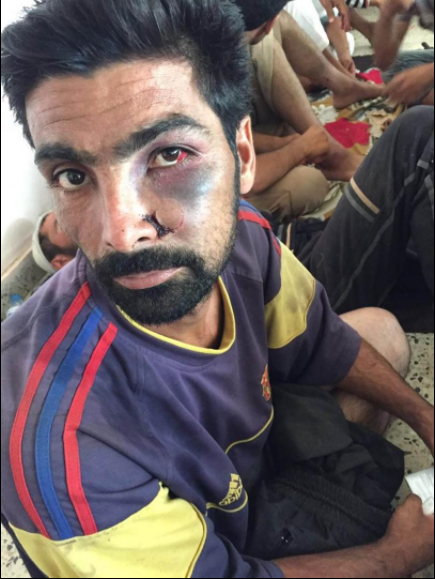 And the thousands of other men and boys who armed forces disappeared from 2014-2017 in other anti-ISIS operations Iraq: Secret Detention, No Recourse https://youtu.be/6YEq_IAsor0 via
@YouTube
https://hrw.org/news/2018/09/27/iraq-secret-detention-no-recourse

Iraq: Secret Detention, No Recourse
Iraqi military and security forces have disappeared dozens of mostly Sunni Arab males since 2014, including children as young as 9, often in the context of c...

Sadly,
@UNIraq
in its newest report concludes limited progress made re establishing fate of the men, boys missing; holding accountable individuals, including commanders, responsible for enforced disappearances; and respecting the right of victims to justice, truth and reparation.
12:06 PM · Aug 30, 2020

Any "@" whatever in a Tweet is taken out by me because otherwise some browsers will show this page with a big, black box covering words.  I've noted before the browsers you can use to avoid that; however, e-mail still come in complaining about those black squares.  For that reason, we remove any @ that I notice.  We also cannot include the Twitter id because the 'blue check' also creates a black square.

The Committee to Protect Journalists Tweets:

At least 64 journalists are currently missing around the world. Nearly one third have disappeared from #Iraq, #Syria, and #Lebanon 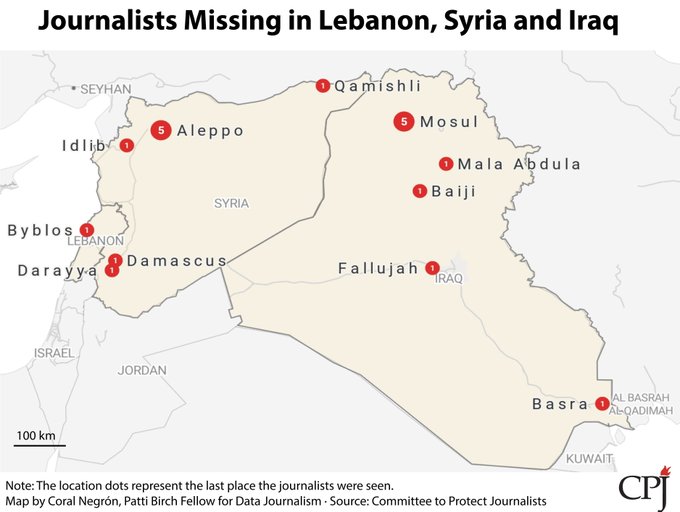 If the disappeared of Iraq don't matter to you, you just might be Paddy Cock-burn.  The supposed Middle East journalist -- notorius in the region for his bias against the Sunnis -- did file a report yesterday.  Not on Iraq's disappeared.  No, Ireland's trashy son wrote about the RNC because that's what you do when you are useless trash, you write about a political convention in the US -- as though America hadn't already weighed in on that?  -- the week after it's over -- instead of noting the disappeared.  It's cheap coverage (from a cheap person) and it is forgotten about two-seconds after anyone reads it.

He tells you that Donald Trump reminds him of Saddam.  Really? I didn't think the CIA installed Donald.  I know they installed Saddam.

"57 channels and there's nothing on," as Bruce Springsteen once sang.

In the US, why are we supporting this crap-ass beggar media that always asks for money but never does anything of value?  Name the last column or 'article' that THE NATION published that made a difference -- and was on a topic that wasn't all over the internet already?  We gave like crazy to PACIFICA in 2005 and 2006 and what did they do with the money?  Nothing of value.  KPFA EVENING NEWS -- which is usually something to applaud -- couldn't even do a story last night.  (It's still THE KPFA EVENING NEWS on Saturday and Sunday when other PACIFICA stations like KPFK and WBAI don't feel that their listeneres need a 30 minute newscast on the weekends.  So much more important to air those dead-on-arrival 'cultural' shows that no one listens to and whose hosts should be forced into retirement.)

As noted above, The Committee To Protect Journalists Tweeted about the day on Sunday.  A few minutes ago, they issued the following:

The Committee to Protect Journalists, which holds consultative status with the U.N., is an independent, nonprofit organization that defends the rights of journalists worldwide to report the news safely and without fear of reprisal. CPJ reports on and mobilizes against hundreds of attacks on the press each year, such as killings, assaults, restrictive legislation, imprisonment, media closures, online harassment, and other threats.

According to CPJ’s research, at least 64 journalists are missing around the world. Nearly one-third of them disappeared while covering armed conflict in Iraq, Lebanon, Syria, and Yemen.

Over the past year, CPJ has been searching for updates on the whereabouts and fate of missing journalists in these countries and tracking down their families — many of whom are themselves displaced. Invariably, the families have been pursuing rumors and have relentlessly approached local and national authorities, as well as international and local organizations, in search of help to find their loved ones, but their efforts have yielded no results.

CPJ believes that these families deserve answers, and that authorities in these countries have a responsibility to conduct investigations and use all the tools at their disposal to find the missing journalists. To that end, CPJ has launched a campaign, #MissingNotForgotten, urging governments to do their utmost.

CPJ has also secured consent from relatives of missing journalists to submit their names to the U.N. Working Group on Enforced or Involuntary Disappearances and request special action.

In line with the International Convention for the Protection of all Persons from Enforced Disappearance, which affirms the right of any victim to know the truth about the circumstances of an enforced disappearance and the fate of the disappeared person, as well as the right to freedom to seek, receive and impart information to this end, CPJ makes the following recommendations:

The governments of Iraq, Lebanon, Syria, and Yemen should:

The Working Group on Enforced or Involuntary Disappearances should:

Today, the International Day of the Disappeared, we must not only heed the uncertainty and the pain that the families of missing journalists endure daily, but also help them find answers. We look forward to your response.

My name is Local Observer & I stand with the protesters & activists of the Tahrir Uprising in Iraq who have been disappeared by "unknown" entities. May the torturers and those that make people's homes a living hell be confronted by their own darkness!

In other news, the government of turkey continues to terrorize Iraq with bombings and troops on the ground.  ARMEN NEWS notes:

The Kurdish community of Armenia held a protest today outside the UN Office in Yerevan, trying to draw the attention of the structure to the ongoing Turkish actions against the Kurdish settlements in Iraq.

Head of the Kurdistan Committee Slo Drboyan told reporters that they are asking to prevent Turkey’s operations.

“We are here to present the concerns of our relatives. Turkey’s leadership today is conducting such a policy which is a threat for all peoples of the region. The Kurdish nation in Iraq is almost on the verge of extinction”, the head of the Kurdistan Committee said, adding that they are concerned over the events taking place in that country.

He said they are expecting the UN Office to take measures to prevent Turkey’s genocidal actions.