Why is it still open?

This is Richard Medhurst asking an important question.

Why is Guantanamo still open?

Why is it still open?

Monday, May 10, 2021.  Another activist has been assassinated in Iraq.

Mustafa al-Kadhimi reigns over Iraq as prime minister while ruining the country as prime minister.  Former prime minister Nouri al-Maliki is a forever thug but he's getting some support on Arabic social media when contrasted with Mustafa.  As one noted on FACEBOOK, Nouri may have attacked the Iraqi people but he didn't let foreigners attack them.  Mustafa, by contrast, encourages the Turkish attacks on the Kurds in northern Iraq and the attacks on activists throughout Iraq.

That's not my endoresement of Nouri al-Maliki.  I'm noting what's becoming a growing attitude on the part of some (still a small group) on Arabic social media.  Only someone as inept as Mustafa could encourage a longing for Nouri.

Except maybe that assassination of an activist.

What are we talking about?  Saturday night, "Ihab al-Wazini, another activist assassinated in Iraq." 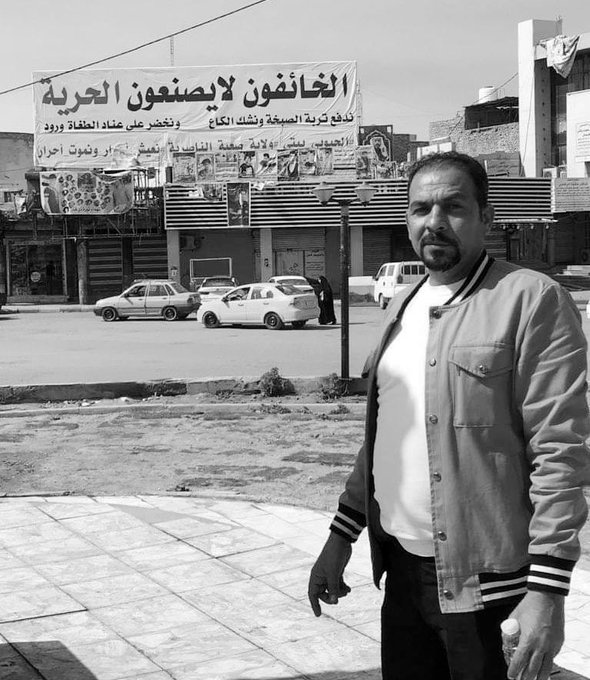 Mustafa vows, does he?  He vows a lot.  His lips flap around constantly.  He just never offers any action.   MEMO observes, "Iraqi Prime Minister Mustafa Al-Kadhimi has pledged to prosecute those involved in the killing of protesters and activists, but no perpetrators have been brought to justice so far."  Over and over, activists are targeted and killed, like something out of Pinochet's reign of terror in Chile.  And no one's ever held accountable.  Mina Aldbroubi (THE NATIONAL) notes other activists who have been recently assassinated:

One of the most prominent political commentators to be murdered was Hisham Al Hashimi, who was shot outside his Baghdad home in July 2020. His death dealt a huge blow to the country’s academic and civil society institutions.

Born in Baghdad in 1973, Al Hashimi was a well-respected expert who wrote extensively about ISIS and Al Qaeda, authoring three books. He advised current and past governments on terrorism and extremist groups.

Al Hashimi was also a strong supporter of the protest movement.

Prominent journalist Ahmad Abdessamad, 37, and his cameraman Safaa Ghali, 26, who had been covering anti-government protests in their home city of Basra, in the south, were shot dead in January 2020.

They were assassinated in their car, while parked near a police station.

Abdessamad was a vocal supporter of the protest rallies.

Jinan Madzi, a paramedic who treated wounded protesters, was shot dead during demonstrations in Basra the same month.

Riham Yaqoob, a doctor and female activist who became the face of the protest movement in Basra, was killed last August.

A few weeks after her death, the killing of another activist, Tahseen Osama, pushed protesters to take to the streets to demand that authorities find those responsible.

Salah Al Iraqi, who was well-known for taking an active role in rallies, was shot dead in eastern Baghdad last December.

Amjad Aldhamat was killed after walking out of a police station last October in his home city of Amara in southern Iraq.

He and another activist had been had been attending a meeting with police to discuss a planned protes.

As Aldhamat walked out, gunmen approached in a car with tinted windows and no licence plates and shot him dead.

Ali Jasb, a young rights lawyer, was kidnapped in Amara in October 2019 and nothing has been heard from him or his captors.

Jasb Aboud, the father of Ali Jasb, publicly accused a powerful Iran-backed militia of kidnapping his son, and sought to take its leader to court.

He was shot dead by gunmen in early March in Amara.

There's a difference between Pinochet's reign of terror and today.  Back then, in the US we at least pretended to care.  Find the activist or even Twitter activist today that bothers to note these killings.  Let an Iranian general known for terrorizing Sunnis and LGBTQs in Iraq for years get killed by the US and Margaret Kimberley and the rest are lamenting him as Ghandi himself.  But let the people -- the actual people -- who need our support be assassinated and everyone's got their thumb up their ass and their lips sealed.

Identifying with the powerful of another government -- one that the US government does not like -- is not being a voice of the people or holding anyone accountable.  Stop pretending you are about the people if, after all the activists killed in Iraq, you can't even find a moment to fake a 280 character Tweet of 'concern.'

WSWS is obsessed with former US president Donald Trump -- former.  It's as though they can't function without their nutty conspiracy theories about the man who is thankfully gone from the White House.  They can obsess over him but they can't cover the Iraqi people.  For an outlet that has trashed JACOBIN repeatedly -- and the DSA -- as nothing but tools of the Democratic Party, they certainly sound like an echo of the Democratic Party with their constant Trump conspiracies and their defenses of Liz Cheney.  They can offer that garbage but they can't cover the targeting of the Iraqi activists.

Who do they think they are fooling?

They don't like the Kurdish government, the WSWS, so they fail to speak out on behalf of the Kurds.  That's not a new development.  That's been their position throughout the ongoing Iraq War.

Again, don't pretend you're holding the powerful accountable when your work is nothing more than defending the repugnant Liz Cheney -- daughter of a War Criminal, daughter who supports her father's War Crimes.  That's who WSWS wastes time on.  Can't defend the Iraqi people but, hey, Liz Cheney's getting some mean words aimed at her so let's rush in and save her.

Time and again, the garbage we choose to focus on is helpful to no one but the powerful.  Cheerleaders for War Hawks, that's really all most of the outlets are today.

Protesters have burned tyres and blocked roads in the Iraqi city of Karbala after a prominent civil activist was killed by unknown gunmen.

Ihab Jawad Al-Wazni was killed in the early hours of Sunday near his home in the predominantly Shia city, according to a statement by the Iraqi defence ministry. No group claimed responsibility.

Al-Wazni, a leading figure in protests against the government in the city, was buried on Sunday morning.

Witnesses said hundreds of people took to the streets in Karbala in demonstrations condemning the activist’s assassination.

Protesters blocked a number of main roads in the city and demanded security forces find and identify al-Wazni’s killers, and threatened to escalate protests if the perpetrators were not exposed.

This morning, the outlet reports:

Protests are expected again in Iraq after demonstrators set fire to trailers belonging to Iran’s consulate in Karbala as anger spread over the killing of a prominent activist in the southern city.

Ihab Jawad al-Wazni, who was active in the organisation of the anti-government protests that swept Iraq in October 2019, was shot dead on Sunday outside his home by unknown assailants. His death sparked daylong protests in Karbala that saw demonstrators block roads and bridges with burning tyres.

“The threats are coming from the militias. The militias are everywhere in the streets,” Samira Abbas Kadhum said. “They mingle with the protesters. They have a list that includes the names of all the activists. They will kill them one by one. Today they killed my son – and after two or three days another one will be killed.”

Please remember that the always ridiculous I-Need-Attention Media Benjamin tried to turn a pie-ing in 2007 into facing an execution squad but she can't say one damn word about Ihab.  If Medea were a real activist, wouldn't her sorry ass identify with Ihab as one activist to another?  Wouldn't she be able to relate -- even just a little -- enough to Tweet about him or co-write a bad column about him?

She deserved the pie-ing and I found it hilarious then and now.  INDYBAY covered it in real time:

Bakers without Borders and Co-optation Watch take action today at the US Social Forum to demand accountability from a self-appointed "spokesperson" whose actions further the commodification of resistance and sabotage our movement's sustainability and credibility. This person's actions benefit the NGO Industrial Complex at the expense of real democracy and solidarity.In particular, we hold Medea Benjamin accountable for:- Publicly siding with the police and municipal authorities against direct actions performed at the World Trade Organization protests of 1999.- Administrative authority in an organization that hordes funds raised for community organizations in Guatemala- Administrative authority in an organization that solicited the economic dependency of residents in Cuba and then abandoned the project, pushing the Cuban participants deeper into poverty.- Acting as self-appointed spokesperson of the "American Left". One egregious example is publicly refusing to endorse a call by hundreds of Lebanese citizens for Israel to unconditionally withdraw from Southern Lebanon in the 2006 war, claiming that the American Left would not swallow such a demand.- Exploiting and dominating movement space, resources, and publicity in the global justice and associated movements.

Medea stinks of fake assery and has for decades now.

ALJAZEERA offers this video report on the assassination of Ihab Jawad al-Wazni.

Want to see garbage?  An outlet Medea loves is the Iranian government's PRESS TV.  This is how PRESS TV 'reports' on what has taken place:

Tehran has strongly condemned an assault against its consulate in Iraq’s holy city of Karbala, urging Baghdad to meet its commitments with regard to protecting Iran’s diplomatic missions in the Arab country.

Khatibzadeh said Iran’s Embassy to Baghdad also followed up on the issue, and subsequently, Iraqi police and security forces dealt with the assailants.

On Sunday night, attackers attempted to set fire to the Iranian consulate, as they gathered outside the consulate burning tires and several trailers parked outside, according to police and videos circulating online.

“The Islamic Republic of Iran strongly condemns the attack on its diplomatic missions in Iraq and, within the framework of the 1961 Convention, hopes that the Iraqi government will fulfill its obligations to protect and safeguard Iran’s diplomatic missions,” he added.

The spokesman said the Foreign Ministry sent Iran’s formal protest to the Iraqi Embassy in Tehran in a letter on Sunday night.

Where's Ihab's name?  It's also spelled Ehab Wazni but you won't find that name either.  Read on for 12 more paragraphs after the excerpt above and you will never find his name.  Let's not pretend PRESS TV is the ogre of the world but let's also stop pretending that it's the journalistic outlet to applaud.  It's as dishonest as any US outlet, stop pretending otherwise.

Iraqi journalist, Ahmed Hassan, is in intensive care after being shot in the head just hours after activist Ehab al Wazni was killed outside his Karbala home

For scholars, analysts & anyone interested in the Middle East, the week has been awful a) Assassination of Iraqi activist Ehab Wazni b) Death of 68 Afghan school girls c) Decapitation of 20-year-old Alireza in Iran by his family for being gay How do you keep your sanity? 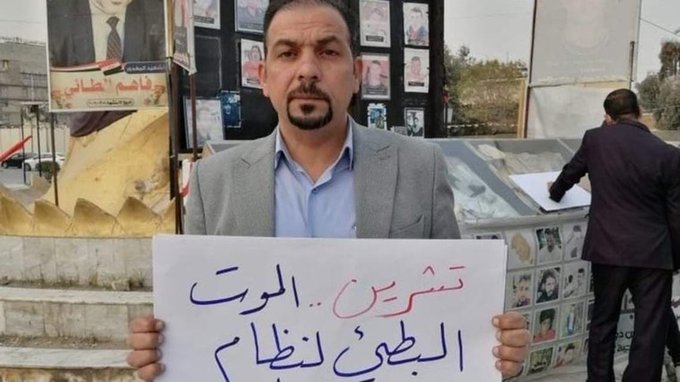 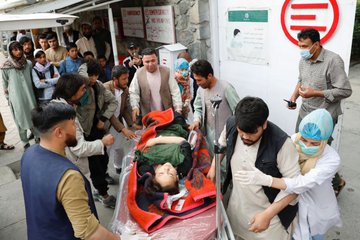 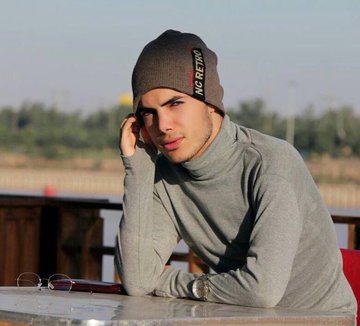 Good question.  But back to the issue of so-called journalists and activists on the left in the US, how do you ignore these things.  Don't you ever get tired of all the crap you churn out over and over?  Crap that's nothing more than Robin Leach's LIFESTYLES OF THE RICH AND FAMOUS masquerading as political critiques?  You have wasted your time and the time of so many others while repeatedly and intentionally ignoring, day after day, the actual victims.