Where is the transparency?


The Justice Department released a portion of an internal memo cited by former leaders as part of their decision concluding that former President Donald Trump did not obstruct justice, but in a court filing late Monday said they would seek to block the full document from release.
The move is certain to disappoint watchdog groups and Biden administration allies in Congress, who have called for transparency about alleged wrongdoing in the Trump years — and accountability for officials who allegedly abused their power.
Democratic Sens. Dick Durbin and Sheldon Whitehouse recently wrote to new Attorney General Merrick Garland, urging him to end the court battle and make the document public "in order to help rebuild the nation's trust in DOJ's independence after four years of turmoil."

Tuesday, May 25, 2021.  Protests throughout Iraq, the Iraqi militias end their truce officially, and much more.

Starting with Lucy Flores who Tweets this morning:

This is in response to the following from The Gravel Institute:

Biden just dropped student debt cancellation down to zero. That’s right, the Biden administration has decided to cancel $0 in student debt.
1:00 PM · May 24, 2021

PRENSA LATINA noted late yesterday, "Three military caravans from the United States have been attacked in the last few hours in Iraq, the Saberin news agency reported on Monday. The incidents against the US vehicles, which were laden with logistical supplies, occurred in the southern provinces of Basra, Al-Muhatna and Dhi Qar."  The attacks on convoys continue today with MEHR NEWS AGENCY noting, "A US convoy was targeted in Al-Diwaniyah province, southern Iraq this Tuesday afternoon, Saberin News reported." In addition, AP notes an attack on Ain al-Asad air base in Anbar, "A single rocket struck close to a military base hosting U.S. troops in western Iraq on Monday without causing any injuries, a spokesman for the U.S.-led coalition said."  Ibrahim Saleh (ANADOLU AGENCY) explains, "Ain Al-Asad base is located in the Al-Baghdadi district, 90 km west of Ramadi, the capital of Anbar province. It is the largest military base for US forces in Iraq and was visited by former President Donald Trump on Dec. 26, 2018."  MIDDLE EAST MONITOR notes that the base was hit by three rockets yesterday.

The attack was noted at yesterday's Pentagon briefing by Press Secretary John Kirby.

Q: Thank you. General McKenzie is in the area making some statements and talked also to the press. Reporting a piece from our colleagues from the A.P. leaves us under the impression that a vacuum is coming. Is the United States committed to the security and to help allies and partners in the area?

MR. KIRBY: Of course we are. Of -- of course we are, and we've said this time and time again, Pierre. Just because we are removing our troops and our -- and ending our military mission in Afghanistan doesn't mean that we're walking away from the region. Nothing could be further from the truth. There's still going to be a robust United States presence in the Middle East, in the Central Com -- Central Command area of responsibility. I think what General McKenzie was referring to was just that we need to be, you know, aware of the potential for other nation-states, with our absence from Afghanistan, you know, what -- what kind of actions they might take. But there's absolutely going to be no diminution of our commitment to our allies and partners in the region, none whatsoever.

Q: Any details or update on today's rocket attack on al-Asad in Iraq? Also, any update on the decision about the troops level there? Is there any change?

MR. KIRBY: About American troops in Iraq, no, there's been no change to their presence there or their purpose there, quite frankly.

I -- you may already have all this. This is what I have. If you already have it, I apologize, but at about 1:30 local time there the al-Asad airbase did experience one rocket round that landed on base. Initial reports are that there are no injuries, but the damage is still being assessed. As you know, sometimes initial reports change. That's what we have right now. The attack's under investigation by the Iraqi Ministry of Defense, and I'd point you to them for any additional information. That's probably what you already had, but that -- that's what I've got for you.

Q: Thank you very much, John, for doing this. I'll -- following up a little bit on a previous question to talk about the fight against ISIS and Iraq and Syria. General McKenzie was just there. Could you tell us both in Bagdad and North East Syria, could you tell us what he discussed and what the results were of those discussions?

MR. KIRBY: Actually, no, I can't, Laurie. I mean I'd refer to you General McKenzie's staff. These are recent discussions. I don't have a read out of how those discussions went. I think the best place to refer you to is Central Command.

Q: I'll do that. But -- but you did reaffirm your -- the U.S. commitment to fighting ISIS in those places?

MR. KIRBY: I -- I can tell you without speaking to General McKenzie's conversation specifically; we remain committed to coalition efforts against ISIS and Iraq and Syria. We still have troops in both places that are dedicated to that mission. We still have partners in the coalition that are dedicated to that mission and nothing's changed about it as of today.

But as to the specifics of General McKenzie's conversations, I think his staff is better positioned to give you that than I am.

Thus, on Monday, one reporter, citing a wire service story that suggested an impending US withdrawal, challenged Kirby, “The press reporting, at least from our colleagues in the AP, leaves us under the impression that a vacuum” is emerging in the area. “Is the United States committed to the security” of “its allies and partners in the area?"

“Of course we are. We’ve said this time and time again,” Kirby responded, as he corrected the impression created by the Associated Press report, entitled, “As US scales back in Mideast, China may step in.”

Kirby explained that the article, which claimed to report the view of CENTCOM commander, Gen. Frank McKenzie, was inaccurate. McKenzie was not referring to Iraq and Syria (where China has not been militarily engaged), but to Afghanistan, which has a small (50 mile) border with China.

“Just because we are removing our troops and ending our military mission in Afghanistan doesn't mean that we're walking away from the region. Nothing could be further from the truth,” Kirby affirmed to the skeptical reporter. “There's still going to be a robust United States presence in the Middle East, in the Central Command Area of Responsibility.”

As if the ongoing attacks hadn't already made clear, the October 'truce' between milita groups in Iraq and the US government has long ago ended.  The end has now been made official.  Jason Ditz (ANTIWAR.COM) reports:

A truce among Iraqi Shi’ite militias ending attacks on US forces was meant to provide an opportunity for the government to finalize pullout talks. Leaders say that the militias are withdrawing from that truce now, and will resume attacks.

The militias had the impression that talks on future US presence would end with a pullout, but now say they view the government’s efforts as showing a “lack of seriousness.” Once again, the militias believe they have to try to force the US out.

Iraqi armed factions backed by Iran have declared the end of an unofficial truce with the US and threatened to carry out attacks targeting military convoys and army bases, the commander of one prominent faction told Middle East Eye.

The commander said on Monday that the decision to end the truce, which came into effect last October, was due to "the lack of seriousness of the Iraqi and US governments in scheduling the withdrawal of US forces from Iraq".

Earlier on Monday, three missiles targeted the sprawling Ain al-Assad base in Iraq's western desert where US forces are stationed. The attack, which saw at least one missile land inside the base, did not result in any casualties, according to Iraqi security officials.

In the interview, the Iraqi commander said the anti-terror groups have decided to end the October truce due to "the lack of seriousness of the Iraqi and US governments in scheduling the withdrawal of US forces from Iraq".

“All factions agreed to escalate [attacks] against American forces. They decided to carry out more attacks, some of which would be previously unfamiliar in Iraq,” he added.

Iraq's October Revolution protestors are mobilizing again today. These renewed protests highlight the continued assassination campaigns against activists and journalists. Follow along with the hashtags: #من_قتلني (who killed me?) and #العدلين_راجعين

Under the slogan of “Who killed me?” hundreds are expected to demand the arrest of Karbala activist Ihab Al Wazni’s killers and accountability for the increase of killings of journalists, activists and members of Iraq’s civil society.

“The central committee for protests, which consists of activists and protesters, has organised a demonstration to be held on May 25, that calls on millions to march to Baghdad from across the country calling for Al Wazni’s killers to be held accountable,” Dhia Al Hindi, a leader in Karbala's protest movement, told The National.

They also called for the ousting of the government who they believe is corrupt.

Tuesday's demonstration is set to start at 10am where protesters will gather in Baghdad’s Tahrir Square, Mr Al Hindi said.

Ahead of the protests today, the Iraqi Observatory for Human Rights Tweeted:

The Iraqi Observatory for Human Rights warns the government against using violence against demonstrators. Thousands prepare to demonstrate again in Baghdad. The government should protect them.
2:51 PM · May 24, 2021

Despite the warning, the government began cracking down on the protesters yesterday.  Dilan Sirwan (RUDAW) reports, "Four people were arrested near Baghdad’s Tahrir Square on Tuesday morning, ahead of a planned large demonstration condemning the government’s failure to arrest those behind a spate of murders of activists and journalists, Iraq’s Security Media Cell stated. "

Why are they protesting?  Sarah Naoum explains:

The aim of the 25th of May protest in Iraq is to #EndImpunity WE DEMAND JUSTICE Every single one of those responsible for the death of the October protesters and everyone followed, those involved in the kidnapping, arrest, intimidation, and threats should get what they deserve!

There has been no accountability for these murders.  Mina Aldroubi and Sinan Mahmoud (THE NATIONAL) note,  "Authorities have consistently failed to publicly identify or charge the perpetrators of the killings, which have not been claimed. Tuesday’s protests have been arranged under the slogan 'I'm Iraqi. Who has killed me?'"

Ali Al Mikdam offers a listing of some of the demands:

A stand out moment in Baghdad today to Haider Ahmed:

Why the need to send out the above?  Once again, the Iraqi government is attempting to prevent press coverage: 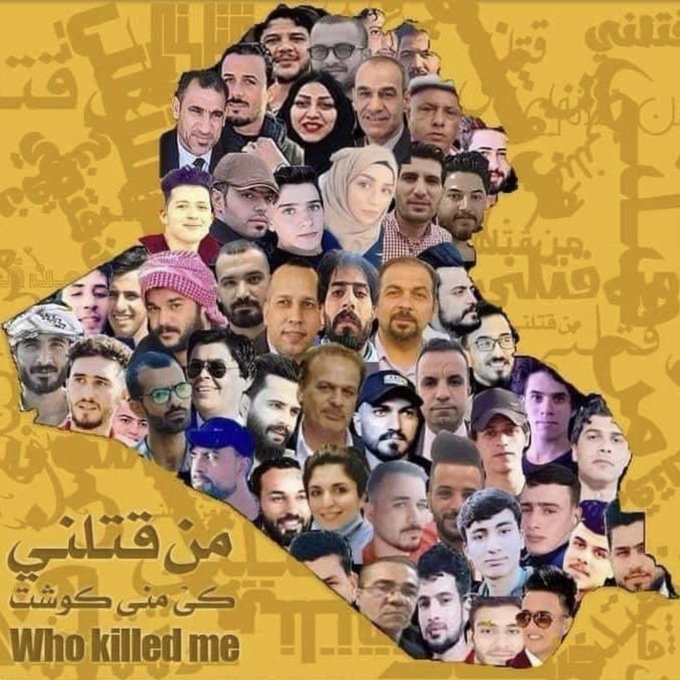 Ahead of the protests, Louisa Loveluck of THE WASHINGTON POST Tweeted:

Activists are calling for protests in Baghdad and southern Iraq tomorrow under the slogan: “Who killed me?” They are demanding the arrest of slain Karbala activist Ehab al-Wazni’s killers, as well as accountability for the rising tide of other targeted assassinations. 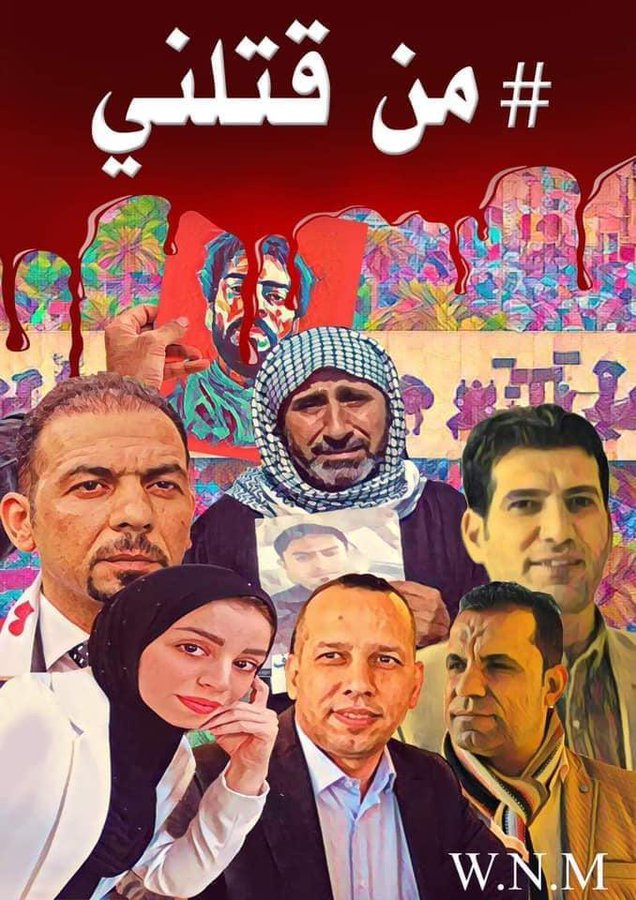 And she is Tweeting already on today's protests -- here for her thread -- but will others outside of Iraq join her in covering the protests?