Eamon Kenney talks about the assassination of J.F.K.

This is a video of DALLS TIMES HERALD photographer Eamon Kennedy discussing his photographs of the Kennedy assassination.

Wednesday, May 19, 2021.  Robert Pether remains held in an Iraqi prison, an asylum seeker in Iraq sets himself on fire, another attack on a US convoy in Iraq, and much more.

Australian citizen Robert Pether has apparently been abandoned by his own country which does nothing to object to his imprisonment in Iraq.  (The Australian Embassy staff didn't even meet with Pether until May 3rd, 26 days after he was imprisoned.)   It's now been over forty days that he's been held in a prison with no charge (they say they are holding him for "questioning").  His appeal for bail was denied on May 11th.  He was told by his own government that it was safe to go to Baghdad for a meeting.  He showed up at the meeting but there was no meeting.  Instead, he was hauled off to an Iraqi prison.  Earlier this month THE IRISH EXAMINER noted:

Robert Pether was arrested and detained on April 7 in what his wife, Desree, believes is some form of contractual dispute, involving his employer, over the building of a new Central Bank building in Iraq, reports
@aranliathroid

'Everyone is starting to crumble': Wife's appeal over engineer detained in Baghdad
State urged to intervene as man being held without charge for a month over a 'contractual dispute' involving his employe

While Australia has done little to nothing, Irish politicians have lodged public objections.  One example is Senator Eugene Murphy:

I again raised the case of Robert Pether in the Seanad this week. I am asking the Irish Government and
@simoncoveney
to assist in a bid to have Mr Pether released from Iraq. His wife Desree and their children are Irish citizens living in Elphin for the past number of years.
10:48 AM · May 11, 2021

Flynn said it had hit the family hard.

“I feel like it’s criminal what they did,” he said. “It’s downright inhumane the way they’ve been treating him, given he has worked tirelessly around the clock to deliver the project.”

Flynn is currently preparing for his university entrance exams in Ireland, something that brings its own enormous stress. Usually, his father would be there to support him. They were close and spoke daily, often about university and Flynn’s future.

But he has managed to speak to his father behind bars just once during the ordeal, for about 30 seconds.

“As soon as he knew that I was on the line, he was just apologising, saying ‘Sorry I can’t make it to graduation, sorry I can’t get to your birthday, I will make it up to you, I promise,’” he said.

“I said to him, ‘It’s not going anywhere without you, and it’s all being recorded anyway. You’re not missing out.’”

Robert’s wife Desree has previously told the Guardian that, prior to travelling to Baghdad for the meeting, her husband sought advice from the Australian embassy. She says he was advised there would be little risk in going to the meeting.

The 46-year-old man is having problems with dizziness and, due to COVID restrictions, cannot be seen by a doctor any sooner than May 22nd.

In other news, we hear often of Iraqis who have sought or are seeking asylum outside of Iraq.  The US government, for example, has done damn little to assist those in need.  But Iraq is also a country in which people seek asylum.  Ghazi Ghareeb Zorab Tweets:

An Iranian Kurd who was asylum seeker in Iraq doused himself in fuel and set himself alight, while the journalists and the reporters didn't stop him. It happened near the UNHCR office in Erbil, the capital city of Iraqi Kurfistan Region in protest against living conditions.
4:16 PM · May 18, 2021

Medics in Arbil treating Mohammad Mahmoudi, 27, said he was in a critical condition.

Before setting himself on fire, Mahmoudi was filmed on a video posted on social media saying he had fled Iran because he was a critic of authorities in Tehran.

“Are we supposed to live the way I live because of my political activity? Is that life?” he said. “We have been living like homeless dogs for four years”.

Friends of Mahmoudi told AFP he is a former Peshmerga and dissident originally from the Boukan region, 480 kilometers (300 miles) west of Tehran, but had sought sanctuary in neighboring Iraq’s autonomous Kurdish region.

A day laborer, he submitted an application for refugee status to the United Nations four years ago, but his request was still reportedly under review, friends said.

“If I return to Iran, I will be executed,” Mahmoudi said.

Mohammad Mahmoudi, an Iranian Kurdish political activist and #asylumseeker, has been living in Iraqi Kurdistan for four years in the worst conditions and without any right to asylum. The #UN did not activate his case and did not grant him any rights. 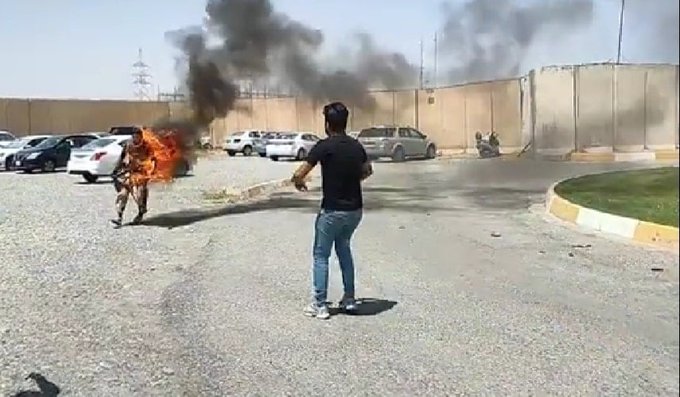 Protests continue in Iraq.  One in Sulaimani gets some press attetion.

Wednesday's protests follow earlier demonstrations by the teachers across Sulaimani governorate the previous day and a strike in Said Sadiq on Sunday.

One teacher protesting in front of the Sulaimani Education Directorate told NRT that nearly 85 percent of positions in the Region’s public education sector are staffed by non-contract teachers.

She said that the teachers have the same duties, but fewer rights, compared with other classes of teachers.

In response to an earlier financial crisis, the KRG instituted a number of austerity measures in 2014 to save money, including by creating a status known as “non-contract,” where teachers are paid a lump sum per class and do not receive bene

Meanwhile, attacks on the US continue in Iraq.  MEHR NEWS AGENCY notes, "A US-led coalition logistics convoy was hit by a roadside bomb on Tuesday afternoon in Al-Diwaniyah province, southern Iraq."

The persecution of the Palestinians continues -- an issue that the Iraqi people care about deeply.  We'll note this from THE KATIE HALPER SHOW.

Let's wind down with this from IAVA:

Chief Operating Officer Sean Ullman and Executive Vice President Hannah Sinoway will provide an overview of the data collected by the QRF in its first year. They will also discuss the program’s highlights and IAVA’s plan to expand QRF offerings. The full scope of the program and ways to connect to QRF can be found here.

“As a leading veteran service organization, caring for veterans and their families is our top priority, ” said Hannah Sinoway. “We launched QRF one year ago as a response to a pressing need for easily accessible mental health resources and overall support for veterans. Over the past year, QRF has helped veterans navigate transition related challenges as well as the mental health, economic, employment and social challenges brought on by the COVID-19 pandemic.”

“As members of the armed services, our veterans experience unique challenges from their time in service,” said Sean Ullman. “QRF is tailored to meet the specific mental health needs of veterans and their families by providing 24/7 peer support.”

IAVA is the voice for the post-9/11 veteran generation. With over 400,000 veterans and allies nationwide, IAVA is the leader in non-partisan veteran advocacy and public awareness. We drive historic impacts for veterans and IAVA’s programs are second to none. Any veteran or family member in need can reach out to IAVA’s Quick Reaction Force at quickreactionforce.org or 855-91RAPID (855-917-2743) to be connected promptly with a veteran care manager who will assist. IAVA’s The Vote Hub is a free tool to register to vote and find polling information. IAVA’s membership is always growing. Join the movement at iava.org/membership.