Over the weekend, protests and demonstrations took place around the world to show support for the Palestinians.  For example, Scotland:

The Scottish people stand with Gaza. A sea of protesters hit the streets of Glasgow today to show their support for Palestine.

Wow. Amazing turnout for Palestine in the streets of Chicago right now.
From
Taylor Moore
4:39 PM · May 16, 202

Incredible! Massive march in Paris in support of #Palestine despite Macron’s recent ban of pro-Palestinian demonstrations.
From
لبناني أصيل
12:36 PM · May 15, 2021

An estimated 150,000 people attended today's protest for Palestine in London. ONE-HUNDRED-AND-FIFTY-THOUSAND INDIVIDUALS. What a glorious day it was

houston, texas protest for palestine in front of city hall 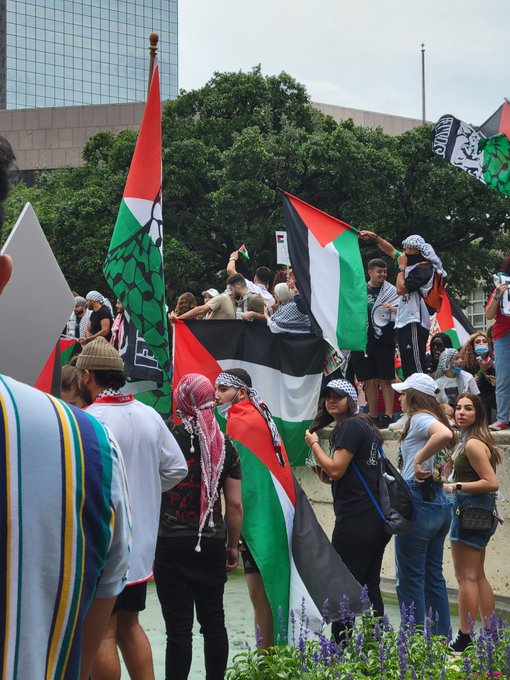 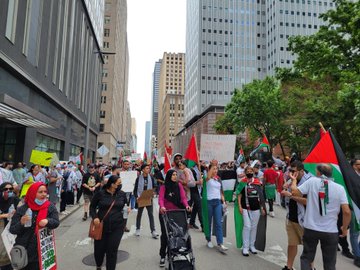 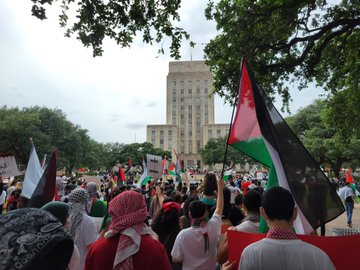 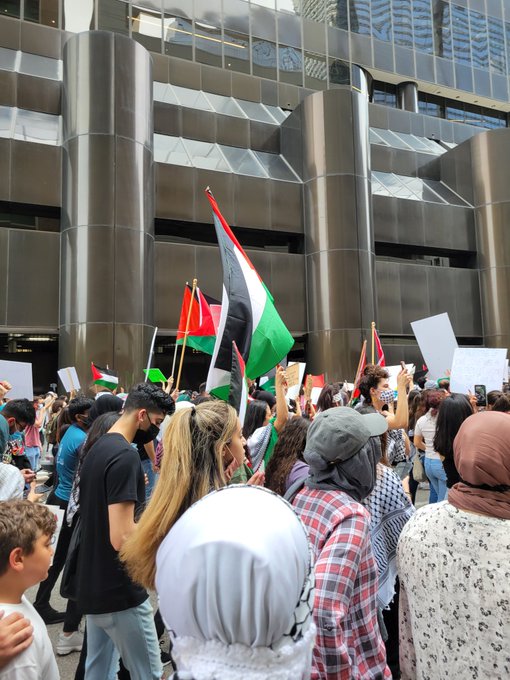 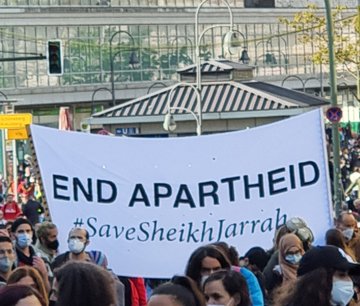 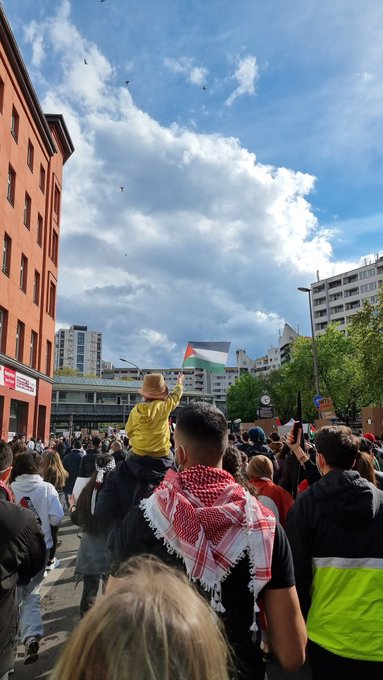 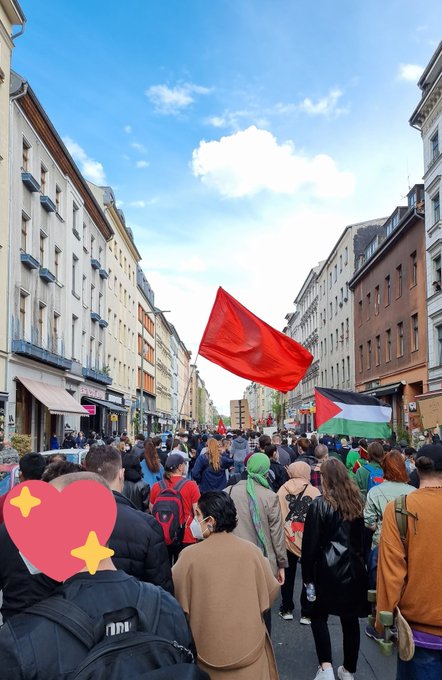 Turnout at LA protest for Palestine was incredible. The biggest I’ve ever seen in the 12yrs I’ve been here. Mostly youth. Even as we were leaving just now, groups of 100s were still arriving after just making it thru police barricades. Keep pushing & this can be a breakthrough! 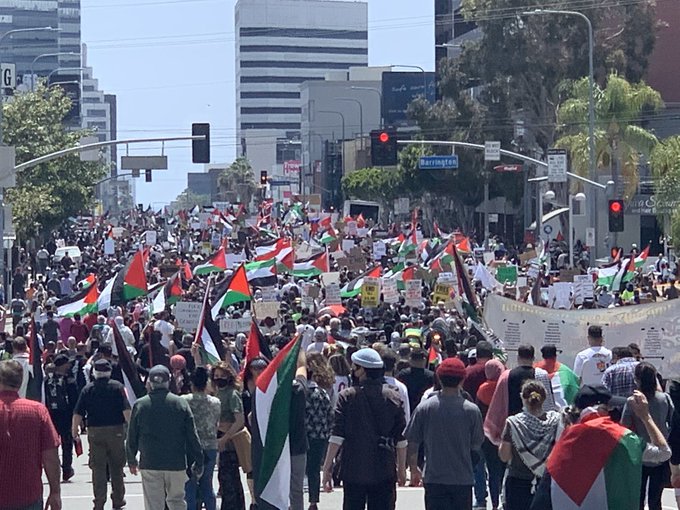 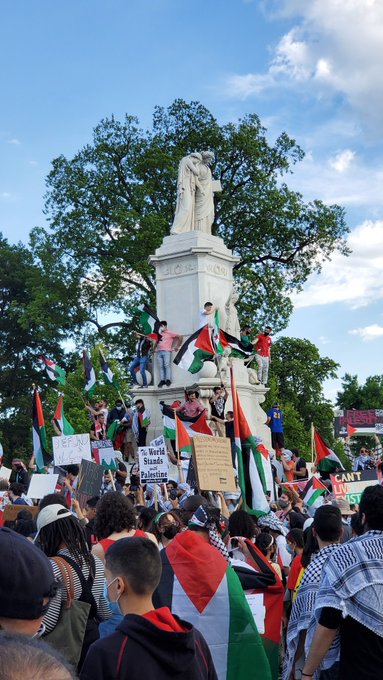 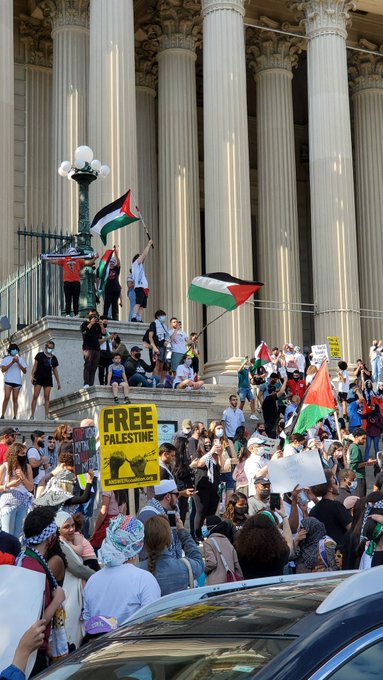 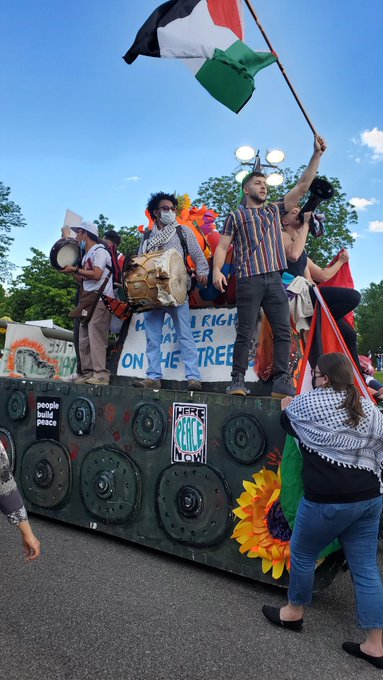 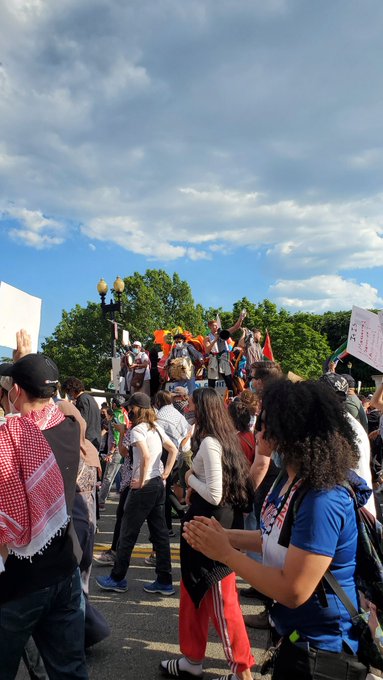 protests for Palestine in Qatar today 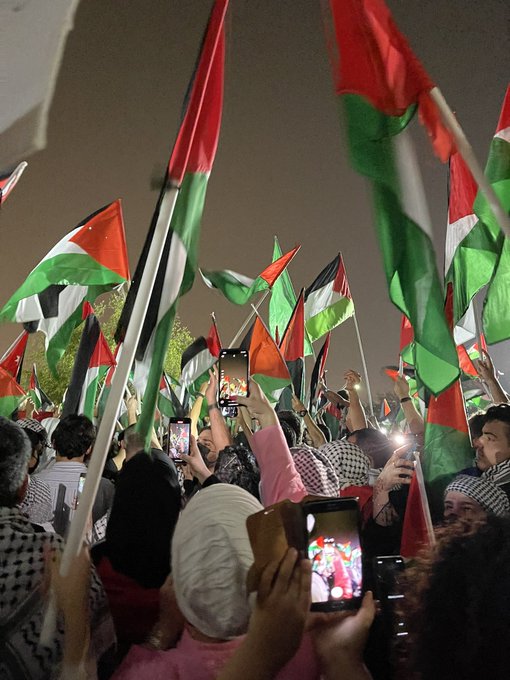 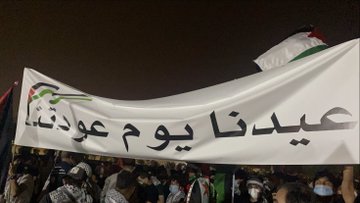 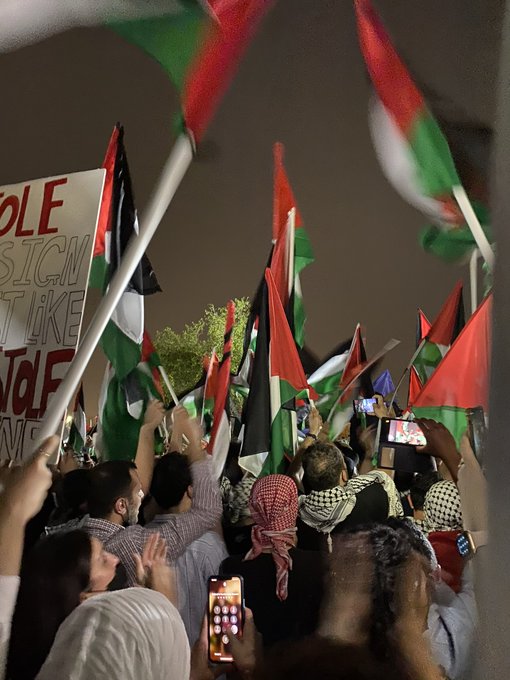 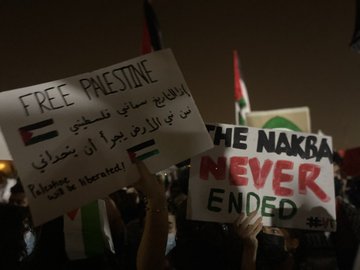 Japanese protest in Tokyo in solidarity with Palestinians yesterday. 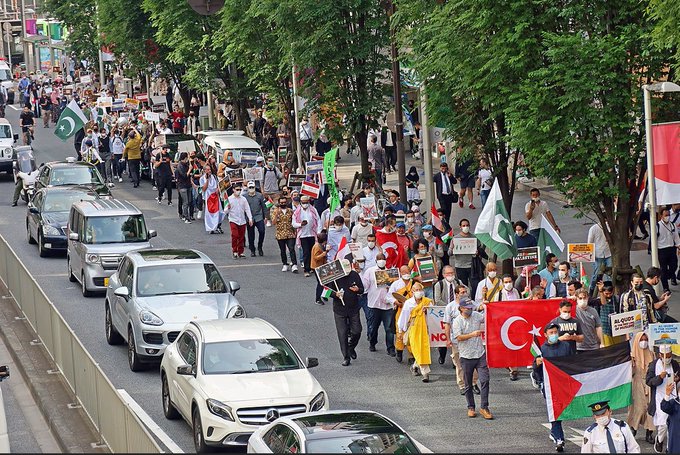 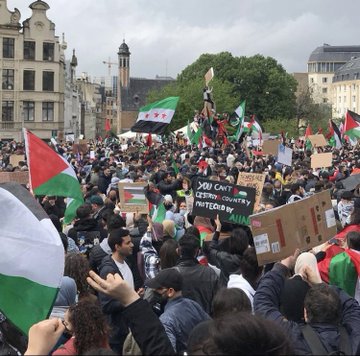 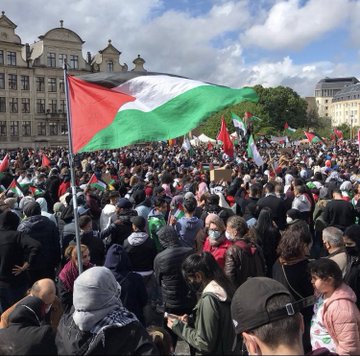 Ethiopians show support for Palestine, in protest against Israel's airstrikes on the Gaza Strip. #Africa4Palestine 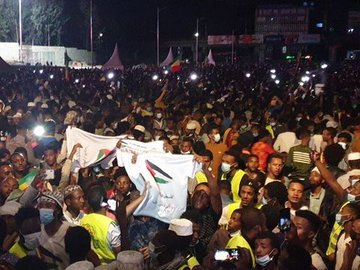 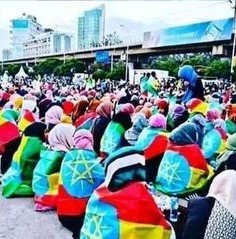 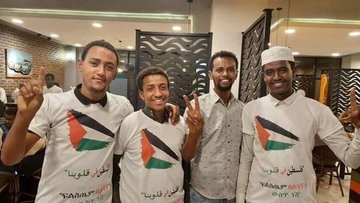 Thousands protest in Dallas TX over Israel-Gaza violence. “I am a Kashmiri and I can feel your pain... Free Palestine- Free Kashmir slogans were also raised. 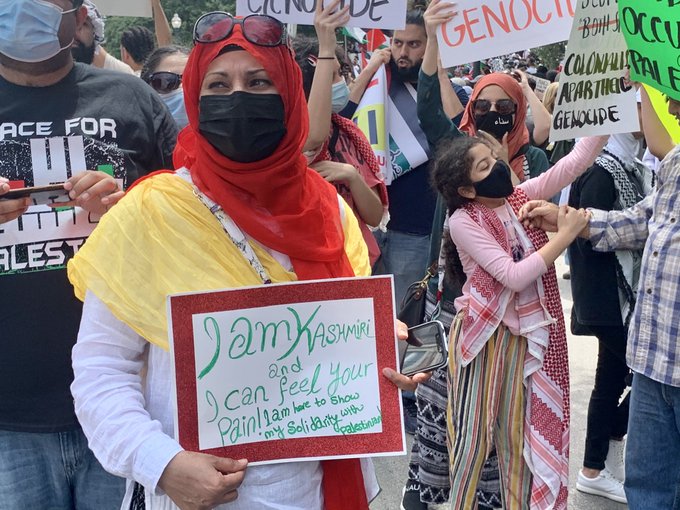 Our Eid is the day of our return, one of the banners from the protest for Palestine in Doha, Qatar

Massive protests in Jordanian capital in support of Palestine 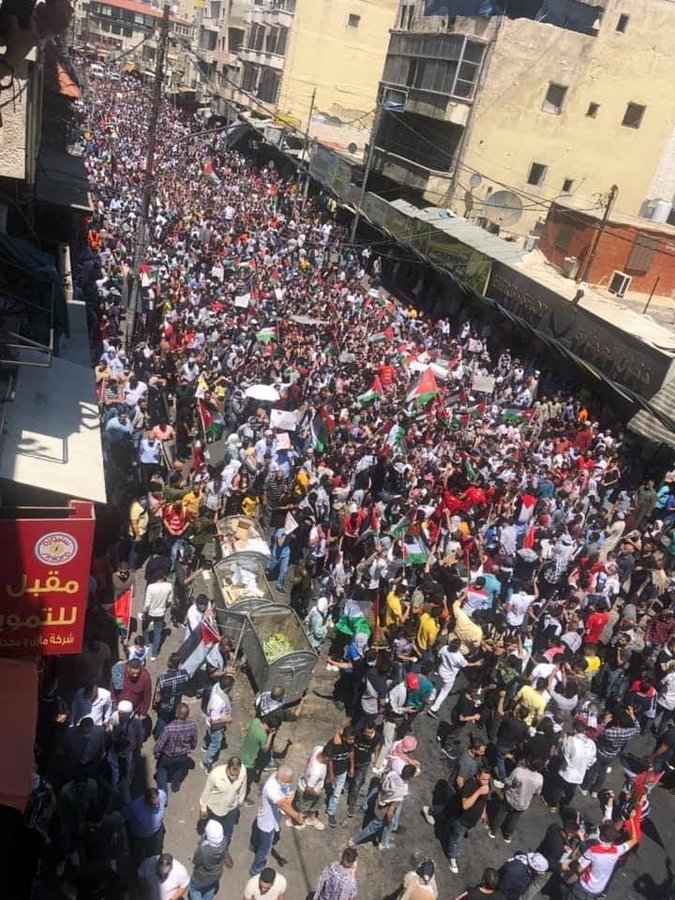 And many other places around the world including Baghdad:

Tens of thousands of Iraqis protest in Baghdad, Iraq, against the ongoing Israeli aggression on Gaza, and to show solidarity with the Palestinian people. #GazaUnderAttack 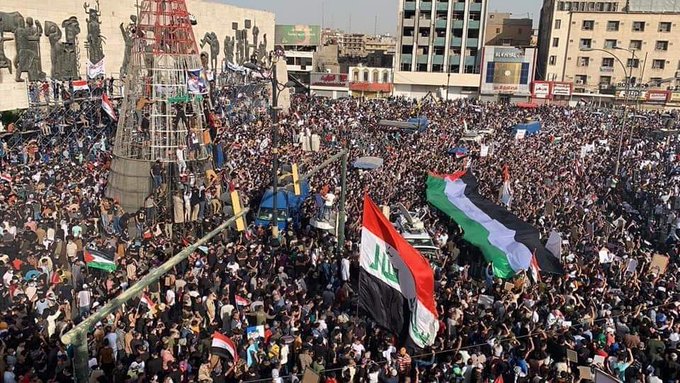 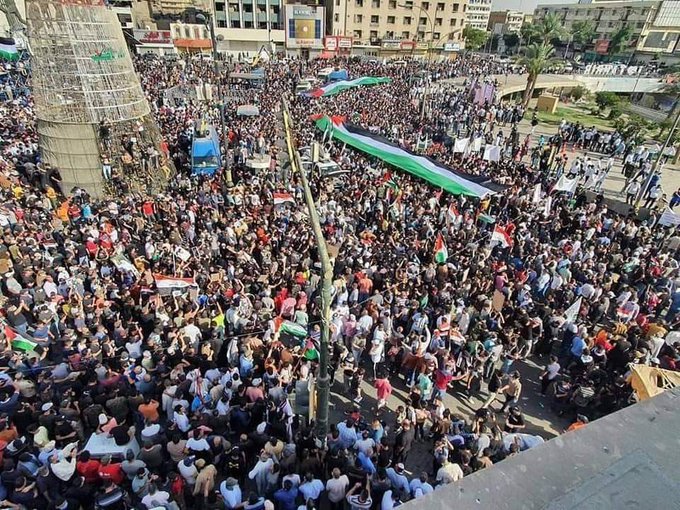 Why so many protests?  Why such massiver turnout at the various protests?

Because this is an issue that can no longer be ignored.  By the time former US President Jimmy Carter was referring to Israel as an apartheid state, people should have been paying attention in the US.  By the time the US was carrying out two forever wars -- Iraq and Afghanistan -- people should have been paying attention.   Many have worked for decades to raise attention on the plight of the Palestinians.   Their work is the bedrock for what's going on right now and the ongoing wars helped fuel awareness over the last years.  The movement the US government could not see coming was always going to rise.  It'  shame that so much money is wasted on 'intelligence' -- so much US taxpayer money -- when there is none in the government.

Another thing to note about the above?  Moqtada al-Sdr had nothing to do with London, Sydney, etc.  And no one is rushing, in those cities, to credit one person.

But with the Baghdad protest?

It's all Moqtada's effort, we are told.  What a lie.

First off, it was a popular protest around the world.  Second, Moqtada wasn't the only voice calling for protests as MEHR NEWS AGENCY notes:

In an exclusive interview with Mehr News Agency (MNA) Nasr al-Shammari, the deputy secretary-general and the spokesman of Iraq's Al-Nujaba Islamic Resistance Movement said that the Islamic Resistance of Iraq will spare no effort in defending their brothers in the Palestinian resistance and the dear Palestinian people based on their religious and moral duties.

Shammari added that the Iraqi resistance is ready to support the Palestinian resistance in the form of weapons supplies and the transfer of experience or in the form of direct participation in the fight against the usurping regime of Israel.

The missile power of the Palestinian resistance pushed ahead of the struggle against the Zionist regime into a new stage, according to the Nujaba deputy secretary-general, adding that now a new balance of power has been formed.

He added that the resistance now has the upper hand in the struggle and has achieved new deterrence, rendering the Zionist regime to think twice before taking action.

He also touched upon the unity among all resistance forces across the region based on their shared Islamic beliefs, explaining that all the resistance groups in different parts of the region have formed a united front against the Israeli regime and in support of the Palestinian forces.

Crediting the protests to Moaqtada?  That's garbage journalism.  That's taking the work of thousands and reducing it to one person.  It's celebrity feature writing, not news.  It obscures reality and leaves readers and viewers with the wrong perceptions.

The turnout in Baghdad was going to be intense (and was throughout Iraq).  Al that was needed was for a date and time to be announced.

Egypt-based Iraqi actress Nadia El-Iraqia, AKA Faten Fathy, has passed away at the age of 58 on Sunday at a Cairo hospital, after weeks of suffering from the COVID-19 pandemic.
Many Arab celebrities and artistic entities have mourned the loss of El-Iraqia who appeared in dozens of popular Arab comic movies and TV series.
Born in Iraq in 1963, she made a fame there under her real name Faten Fathy, participating in many TV series and theater plays there, in which she showed skills in singing as well.
Getting married to an Egyptian man, she moved to Egypt in late 90s to start her career with minor roles in TV and theater in addition to a number of TV advertisements, to quickly becoming a favorite choice in comedy movies since the early 2000s.
El-Iraqia worked with a number of directors in Egypt, including Youssif Shahin. Among her memorized participations in Egyptian movies are Africano (2001), Ghawy Hob, Abo Ali, Al-Bahethat 'An Al-Gorreya (2005), The Yacoubian Building (2006), Keda Reda, Heya Fawda (2007), Waraqet Shafra, Nems Bond, El-Dada Dody (2008), Dokkan Shehata(2009), and Kalemny Shokran (2010), to name a few.
Her TV appearances included Zizinea (2000), El-Attar W Al-Saba' Banat (2002), Raya W Skeina (2005), QAdyet Ra'y A'am, Sultan El-Gharam and Hanan W'Haneen (2007), Ayza Atgawez (2010), Selsal El-Dam (2013), Azmy W'Ashgan (2018) with her last appearance was during the Ramadan season in Ahsan Ab (2021).

Al-Iraqia was born on August 3, 1963, in Babylon, Iraq as Faten Fathy. The actress starred in about 146 artistic works.

The actress was also known for her role in the 2010 hit-TV series “Ayza Atgawez” starring Hend Sabri.

She starred in her last role in the 2021 TV series “Ahsan Ab”, starring Ali Rabee.

The actress is survived by her three children, a boy, and two girls.

ALSUMARIA notes the passing here.  ALMADA notes she began her career at the age of 16, working for IRAQI RADIO.

Moving on to other issues, e-mails are asking about Ava and my latest piece?  We wrote it.  It took five hours to write.  We finished it at 9:00 am Sunday morning.  THIRD's not finished the rest of the stuff, but we wrote our piece -- we also did an interview with Ty for this edition.  (About KINDLE.)  I have no idea what the status is on the rest.  If it's not up by Monday night, I'm posting what is done Tuesday morning.