Some documents get released

As we await the release of some documents that the Biden administration is blocking, documents with regards to another issue have come to light. Jonathan Turley notes:


The long-awaited, though partial, release of a memorandum from the Justice Department this week left many “frustrated,” as predicted by the Washington Post, in Washington. The reason is what it did not contain. Critics had sought the memo as the “smoking gun” to show how former Attorney General Bill Barr scuttled any obstruction charges against Donald Trump. Instead, the memo showed the opposite. The staff of the OLC actually found that the allegations did not meet the standard of obstruction even without any defenses or privileges related to Trump’s office.
The issue of obstruction of justice ran throughout Barr’s second term as Attorney General. Before his confirmation hearing, a memo was released that Barr wrote to Deputy Attorney General Rod Rosenstein on a potentially serious flaw in the use of the most likely federal provision on obstruction of justice against Trump. Barr was hammered by Democratic senators on his view of obstruction, as was I when I testified the next day as a witness. I agreed with many of the flaws noted by Barr in the memo.

Barr’s more nuanced arguments were drowned out by a long litany of experts like Harvard Professor Laurence Tribe who publicly insisted that obstruction was not only clearly established (with a long litany of other crimes) but that Barr’s rejection of that crime was evidence of his raw partisanship. In a public letter to me, Ralph Nader, Lou Fisher, and Bruce Fein stated that his rejection of obstruction was akin to “a papal encyclical that President Trump was innocent of obstruction of justice” that ignored Mueller’s “chronicle [of] multiple instances of evidence of obstruction.”
Throughout this never-ending barrage, Barr remained largely silent on the internal review of the matter and declined to release the full OLC memo. That only increased speculation that Barr must be hiding countervailing conclusions of legal staff. We know now that (at least the now disclosed portion of) the memo supports Barr’s prior view and, despite that fact, he withheld the information out of concern for the confidentiality of the internal deliberations.
It turns out that the review and debate over the obstruction allegations began before Barr started as Attorney General. The memo also confirms that the Mueller staff was part of that analysis with career prosecutors at Main Justice. The memo states that the prosecutors reviewed the Mueller evidence and concluded that the evidence “examined by the Special Counsel could not, as a matter of law, support an obstruction charge under the circumstances. Accordingly, were there no constitutional barriers, we would recommend, under the Principles of Federal Prosecution, that you decline to commence such a prosecution.” In plain English, that means that the prosecutors came to the same conclusion as Barr that the alleged conduct did not satisfy the elements of this crime. Moreover, it stated that it would recommend against such a charge even without consideration of any constitutional barriers presented by Trump’s office.

Remember all those people who thought they knew everything? Woops. They did not know everything.

This is C.I.'s "Iraq snapshot" for Wednesday:

Wednesday, May 26, 2021.  At least two dead and hundreds injured in the Baghdad protest that took place Tuesday.

Yesterday, across Iraq, the people took to the streets to honor the many protesters who have been assassinated since The October Movement began in 2019.  The government responded?  By killing more of them.

And, no, Alanis, that's not ironic -- it's just tragic and criminal.  Seth J. Frantzman (JERUSALEM POST) observes, "As if to show that there is complete impunity for killing civilians in Iraq, the forces shot the very people who were angry that people are being targeted and killed.  In short: If you protest in Iraq they will shoot you. If you are an activist you will be hunted down by militias, many of them linked to Iran, and killed."

Jordan's ROYA NEWS notes, "Wednesday, the hashtag ‘Iraq is uprising’ topped the list of trending hashtags on Twitter after an Iraqi protester was killed Tuesday by security forces' bullets and at least 13 others were injured by tear gas following clashes that occurred due to mass protests that took place in Tahrir Square in Baghdad."  This morning, #IRAQILIVESMATTER is trending on social media.  Hawraa is among those using the hashtag:

In Iraq,everything equal death,and in the shadow of a fake democracy controlled by armed groups loyal to Iran through which power cannot be changed,the people have found no way but to protest and protest while they are still being killed for a year and a half. #Iraqi_lives_matter "In Iraq, everything equal death, and in the shadow of a fake democracy controlled by armed groups loyal to Iran through which power cannot be changed, the people have found no way but to protest and protest while they are still being killed for a year and a half" #iraqiprotest

Protests took place throughout Iraq (and Iraqis in Germany also demonstrated).  The photos in Mortada's Tweet capture how large the turnout was in Baghdad: 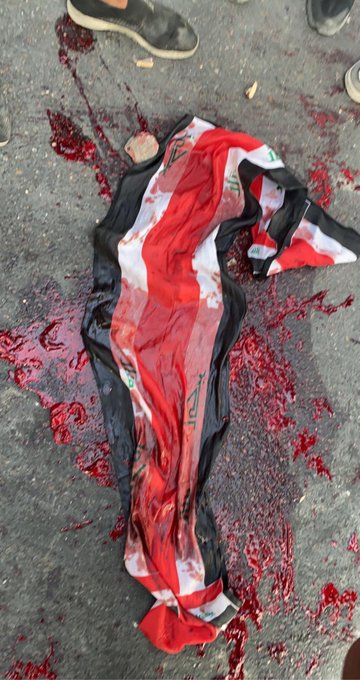 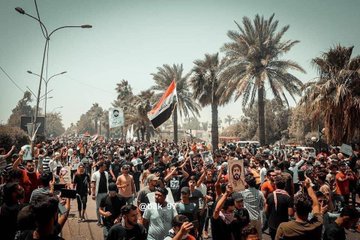 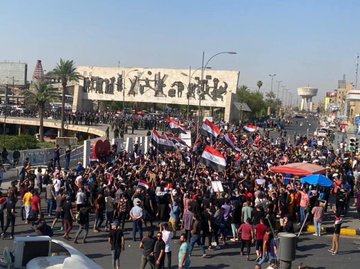 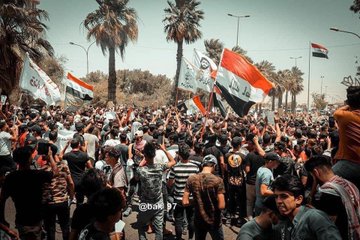 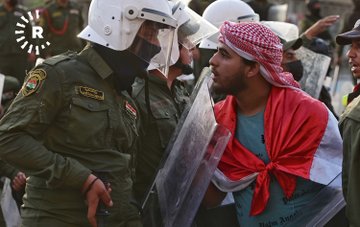 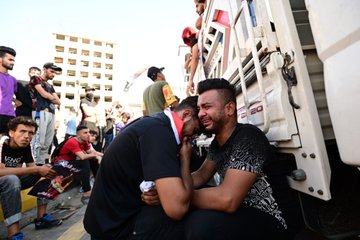 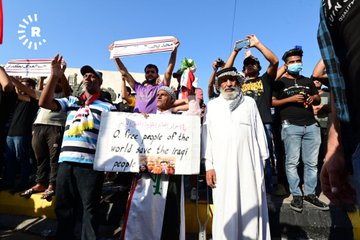 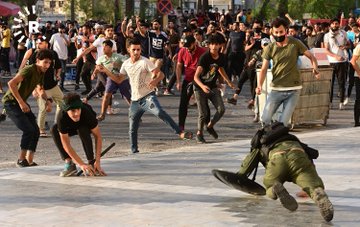 “Who killed me?” the signs asked, alongside images of dead men and women, among the roughly 80 Iraqi activists murdered since late 2019. Young demonstrators held aloft the posters in Baghdad’s Tahrir Square on Tuesday, illustrating both the enduring spark and diminished strength of Iraq’s anti-government protest movement.

The demonstrators (publicly) and Iraqi officials (privately) say they know who killed many of the activists: Iran-backed militias that have essentially crushed a grass-roots anti-corruption movement that blames Iranian influence, and the militias, for many of Iraq’s ills. In a country where militias — nominally a part of the security apparatus — operate with impunity, the killers have gone unpunished.

The several thousand young men gathered in Baghdad’s central square Tuesday constituted the biggest protest in the Iraqi capital since the anniversary last October of demonstrations in 2019 that swept Baghdad and southern cities and brought down a government. The movement is driven by anger at the government’s failure to make promised reforms, including curbs on Iranian-backed militias.

Suadad al-Salhy (MIDDLE EAST EYE) reminds, "Those protests, which erupted due to widespread corruption, a lack of jobs and an out-of-touch political class, resulted in the resignation of Prime Minister Adel Abdul Mahdi."

Mohammad Baker from the southern town of Diwaniya died in al-Kindi hospital from a gunshot wound in the neck, a medical source said.

Waving portraits of victims, gunned down with silencers by unknown assailants, the demonstrators converged on the Iraqi capital's main squares including Tahrir, as police were deployed in force.

"Revolution against the parties," they chanted.

"Who killed me?" banners read.

AFP notes these numbers, "Two Iraqis were killed and 28 others were injured in clashes Tuesday as thousands protested in Baghdad to demand justice over a wave of deadly attacks on pro-democracy activists and journalists."  Of the two killed, Louisa Loveluck (WASHINGTON POST) explains, "One of the young men killed in Tahrir Square yesterday was born the year the US invaded Iraq. 18 years on, he was shot demonstrating against the corrupt and unaccountable political system that occupation helped install."

What is happening in #Iraq is horrendous. Since their first protest against their governmental corruption in 2019 to our present day, more than 36 activists and political researchers have been assassinated, aside from 19 other assassination attempts.
5:43 AM · May 26, 2021

The assassinations refer strictly to those hunted outside of a protest.  If you include the Iraqis that have been killed since this movement against corruption began in the fall of 2019, you are looking at hundreds.

* OHCHR documents its field monitoring of the demonstrations in Baghdad and a number of governorates on Tuesday 25 May 2021
* UNHCR monitoring teams document the fall of the martyrs of (2) and (150) injured from protesters and security forces, the outcome of the demonstrations in Tahrir Square.
While the Office of the High Commissioner for Human Rights in Iraq emphasizes the right of citizens to opinion, expression and peaceful demonstration, it deeply regrets the fall of martyrs and injured of protesters and security forces due to clashes in the Liberation Square in Baghdad Ald, which killed a protester (2) and injured (20) others, many of them are still severely injured, (130) security forces were injured and a large number of protesters were arrested. The remaining (11) detainee protesters were presented to the judiciary with the burning of caravan number (2) of the regime's maintenance force due to the use of live bullets and tear gas by the security forces, stones and sharp machines by protesters.
From the beginning of the protests until this moment, the Office has been demanding that the use of excessive violence be prevented and subjected the lawkeepers and the security forces supporting them to more than (500) training workshops on how to deal with and protect the protesters, and at the time In which she asserts the protesters full commitment to the norms of peaceful demonstration and to avoid any clashes with the security forces, she renews its demand to all parties to take the utmost restraint and maintain the peaceful demonstrations.
UNHCR demands the Commander-in-Chief of the Armed Forces to take responsibility and take more serious action against those who used live bullets and excessive violence and bring them to justice and release all detainees against the background of the demonstrations.
It also renews its demand to the brothers protesting to prevent those who want to deflect the demonstrations off their peaceful path and continue exercising this right through cooperation with the security forces and the conservation of public and private property.
High Office for Human Rights - Iraq
26 / May / 2021
For more information

AP quotes activist Kamal Jaban stating, "Today’s protests took place because the weak government did not keep its promises to bring the murderers to justice."  Sofia Barbarani (ALJAZEERA) quotes activist Laith Hussein declaring of the demonstrations, "This is a response to a call of Ihab al-Wazni’s family … and to object against a political system that is not truly democratic but pretends to be.  We want to get rid of the parties in power, [we want] real freedom, true democracy and to make radical changes to this system."  Ihab was assissanted earlier this month.  KIRKUK NOW Tweeted about him May 9th:

UK Ambassador to Iraq tweeted: I strongly condemn the killing of the activist Ihab al-Wazni . Impunity for the killing of activists since Oct 19 has only led to more deaths. There is an urgent need for concrete measures to hold perpetrators accountable & protect Iraqi citizens 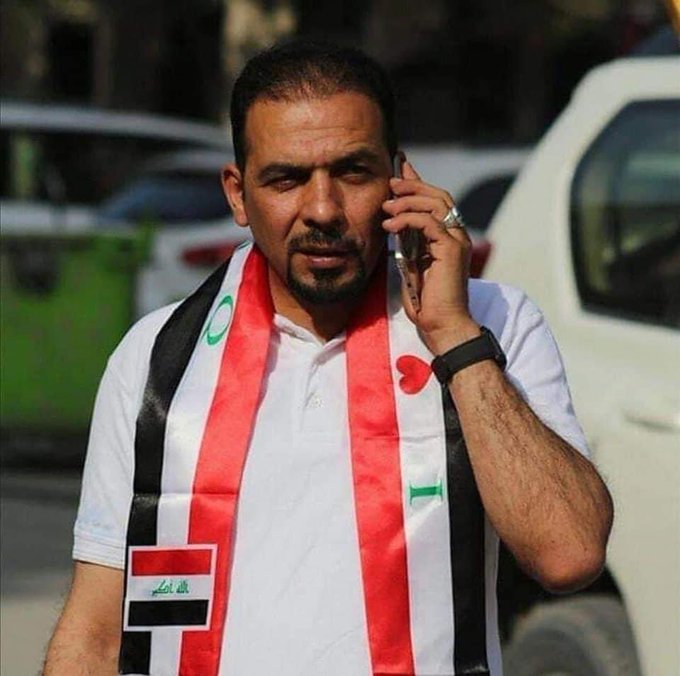 At their official Twitter feed, the Iraqi government offers:

PM
@MAKadhimi
issues orders to open a transparent investigation to uncover the circumstances of what happened in the last moments at the Tahrir Square demonstration yesterday. PM confirms his support for freedom of peaceful protest and the need to protect the demonstrators. 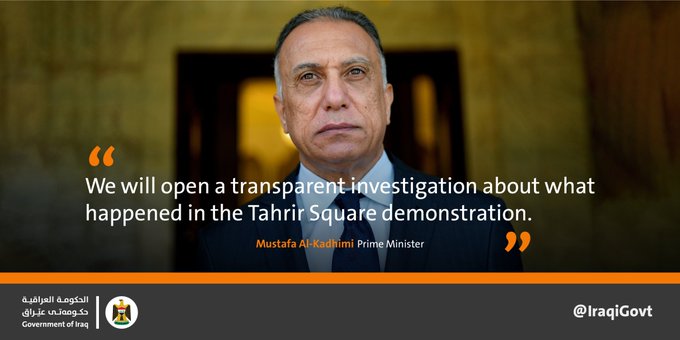 Take that assertion seriously?  With Mustafa's history of doing nothing?

The human rights community for over a year has been warning the government that if there is no accountability for the horrific assassinations, kidnappings, threats and other attacks, the protest movement will not go away, Belkis Wille, a senior researcher on Iraq at Human Rights Watch said.

“Protesters will be more and more galvanised by calls for accountability and justice and people on the streets will continue to remain angry that their government has been completely unable to bring killers to account,” Ms Wille told The National.

“As long as accountability isn't delivered by the government I think that protests will continue,” she said.

Although the government has said that it has ordered armed forces to not use violence and live ammunition against protesters, that has not been the case.