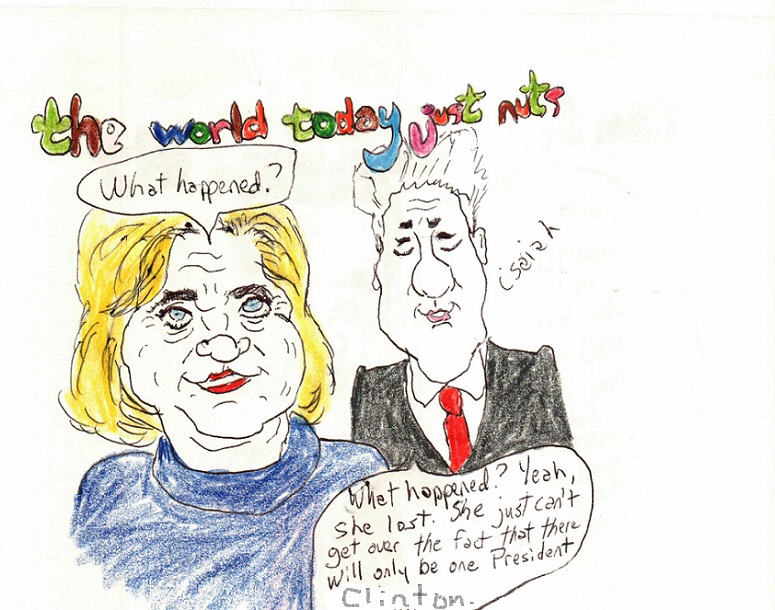 That's Isaiah's THE WORLD TODAY JUST NUTS "She Lost" and here is some more  truth telling.

Jehu‏ @Damn_Jehu
Your daily reminder that whatever problems Puerto Rico is experiencing is because it is not independent and socialist like Cuba. Not Trump.
5:36 PM - 1 Oct 2017
4 replies24 retweets85 likes


We were talking about Puerto Rico while working on THIRD.  I saw this and it reminded me of what C.I. was saying.

I had completely fallen for the propaganda.

But the truth is reality.

Monday, October 2, 2017.  Chaos and violence continue, threats against the KRG continue, Sunnis ponder their future in Iraq and another service member in the US-led coalition has been killed.


Chad Garland (STARS AND STRIPES) reports, "One coalition servicemember was killed and another injured in Iraq when their vehicle was struck by a roadside bomb on Sunday, the U.S.-led coalition said."  XINHUA adds, "The U.S. military announcement came as thousands of U.S. troops are participating in the U.S.-led coalition that included the United States, Canada and several NATO countries, to fight against IS group in Iraq and Syria."


Last Monday, the Kurdistan Region (northern Iraq) held a referendum, polling the people to see whether they would like to continue under the control of the Baghdad-based government or go out on their own.  The referendum overwhelmingly passed.

In response to this peaceful vote, the governments of Iraq, Turkey and Iran offered threats.

Saturday, AP reported, "Two Iraqi officials say Iraqi central government officials have moved through Turkey onto the Turkish side of one of the Kurdish region’s international border crossings. The Saturday maneuvers come as Baghdad works to isolate the region [. . .]"  RUDAW added, "Iranian and Iraqi forces are to launch a joint military exercise on Iran's borders with the Kurdistan Region in the coming days, a senior Iranian security official told his country's state TV."  Today, RUDAW notes, "A joint military drill between Iranian and Iraqi forces has started on the Iran-KRG borders, temporarily closing two major border gates with the Kurdish Region."

Solinnx‏ @solinnx  4m4 minutes ago
Iran, Iraq & Turkey could not unite fighting against ISIS but when it comes to Kurds who want independence they come with guns blazing
0 replies0 retweets0 likes 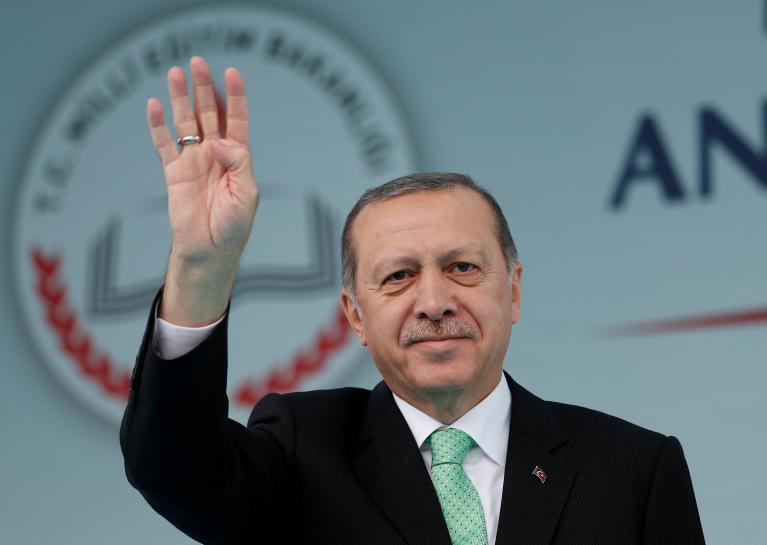 
The Political Leadership of the Kurdistan Region has welcomed a call by Iraq’s Grand Ayatollah Ali Sistani for dialogue as something positive that goes in line with the Kurdish position on resolving disagreements with the central government through peaceful negotiations.

Representatives of Kurdish parties said in a public statement on Sunday that Ayatollah Sistani’s  “call is an important step to protect our principles which are the protection of peace, social security and uprooting violence and threats.”

Ayatollah Sisitani who’s the highest religious authority of the Shiite faith in Iraq called through his representative Ahmed Alsafi during a sermon on Friday that all sides must avoid violence and work to ensure “principles prevail over the sword,”


Outside of al-Sistani, the response has been threats of violence.

In Europe, Catalonia voted Sunday to break off from Spain.  The response from the Spanish government was violence.

Former British diplomat Carne Ross explained the basics in a series of Tweets.

Carne Ross‏Verified account @carneross  13h13 hours ago
Carne Ross Retweeted Boris Johnson
No. When people are beaten for voting, then it's a matter for everyone. Democracy is more important than constitutions or law.
Carne Ross added,
Boris JohnsonVerified account @BorisJohnson
The Catalonian referendum is a matter for the Spanish govt & people. Imp that Spanish constitution respected & the rule of law upheld. (1/2)
0 replies16 retweets21 likes


Carne Ross‏Verified account @carneross  3h3 hours ago
Replying to @carneross @IDiplomat
4. And that usually only happens when alternative really bad i.e. war, which was real threat in Kosovo and Sth Sudan if self-det prevented
0 replies2 retweets1 like


Carne Ross‏Verified account @carneross  3h3 hours ago
Replying to @carneross
4. Even then, process is long, messy, tendentious, often with disorder and threat of violence
0 replies1 retweet1 like

Carne Ross‏Verified account @carneross  3h3 hours ago
Replying to @carneross @IDiplomat
5. We need a set of widely-accepted principles on what is legitimate self-determination? Have thought about this:
0 replies1 retweet1 like

The mufti of Iraq's Sunni community said the Iraqi governments’ oppressions against the Kurds made the nation seek independence. He also said Iraq has become a sectarian state run by Iranian politicians.

Rafi al-Rufai said through his representative Abdulwahab Ani, that Baghdad’s “baseless” decision to cut the Kurdistan Region’s budget share in 2014, during Nouri al-Maliki's tenure as premier, prompted the Kurdistan nation to determine its fate in an independence referendum.


“When oppressions accumulated against the Kurdish nation, they began holding a referendum to stay away from these tyrants," Ani said reading a message from the Iraqi Mufti Rufai in a press conference in Erbil.


And the Kurds aren't the only ones persecuted in Iraq.  Which is why ASHARQ AL-AWSAT's is reporting:


Sunni leaders in Iraq plan to meet with Prime Minister Haidar al-Abadi to suggest establishing their own region as they follow in the footsteps of Kurds, who last week voted for their own independence.
They will “propose establishing several regions in respect with the Constitution that allows them to take similar steps,” a source close to the Union of Iraqi Forces said on Sunday.

The source told Asharq Al-Awsat that Sunni officials took the decision of sitting with al-Abadi after they met on Saturday.


With little attention from the press, 'liberating' Hawija is resulting in the creation of even more internal refugees in Iraq. 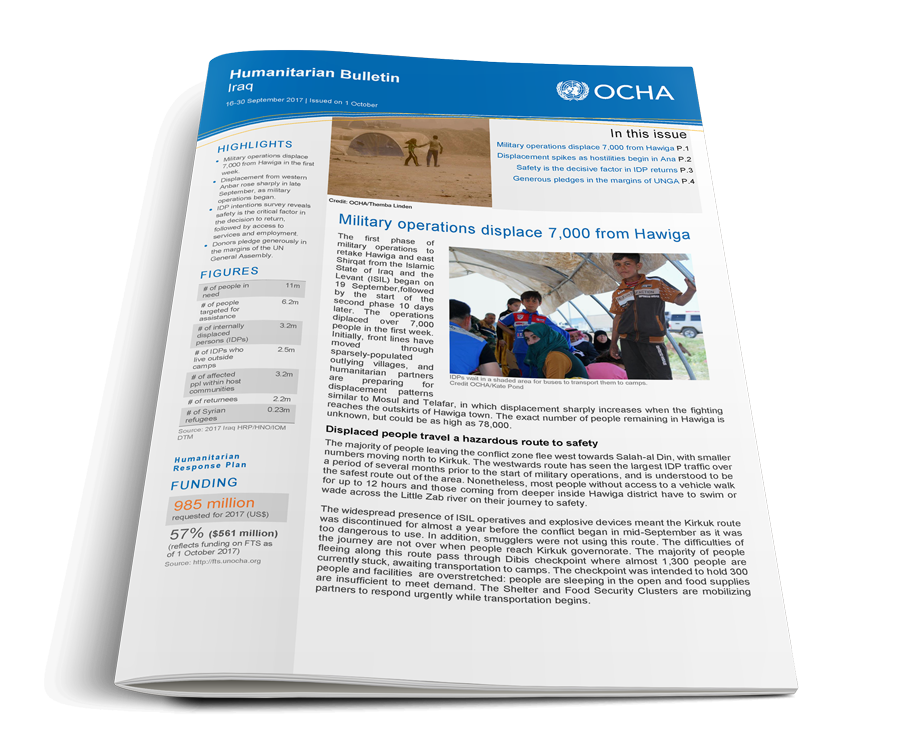 Lastly, yesterday UNAMI issued their undercount of deaths in Iraq for the month of September:

Baghdad, 01 October 2017 – A total of 203 Iraqi civilians were killed and another 389 injured in acts of terrorism, violence and armed conflict in Iraq in September 2017*, according to casualty figures recorded by the United Nations Assistance Mission for Iraq (UNAMI).

Of those figures, Baghdad was the worst affected Governorate, with 194 civilian casualties (37 killed, 157 injured). Dhi Qar Governorate followed, with 82 killed and 93 injured, and Anbar had 20 killed and 46 injured. The figures for Anbar were obtained by UNAMI from the Health Directorate in the Governorate and were updated until 29 September, inclusive.

The United Nations Special Representative of the Secretary-General (SRSG) for Iraq, Mr. Ján Kubiš, said the continuing suffering of civilians is a stark reminder of the terrorist [ISIS]'s ability to strike despite defeats on the battlefront.

“In a single attack on 14 September, [ISIS] terrorists managed to kill or injure close to 200 civilians, including foreign pilgrims, at Nasiriya in Dhi Qar Governorate in the south. This only proves that the terrorist [ISIS] remains a potent force, if not resolutely countered throughout the whole country as a matter of priority, without any distractions that divert attention elsewhere,” Mr. Kubiš said.

“Attacks like this serve as a call for all Iraqis to set aside their differences, no matter how significant and how deep-rooted, and to continue working together in fighting [ISIS]. The terrorist [ISIS], on the verge of being wiped out from the soil of Iraq by the combined efforts of all components of the Iraqi security forces, Peshmerga and local and tribal volunteers seeks to exploit and benefit from every opportunity, every dispute and discord to prolong its lease of life here and in the region, to pursue its global terrorist objectives. Fighting and defeating [ISIS] remains a priority and requires that all Iraqis remain united behind their security forces, focusing on the elimination of this enemy that does not differentiate between a region or a sect and which is lurking around with the aim of undermining the country.”

*CAVEATS: In general, UNAMI has been hindered in effectively verifying casualties in conflict areas. Figures for casualties from Anbar Governorate are provided by the Health Directorate and are noted below. Casualty figures obtained from the Anbar Health Directorate might not fully reflect the real number of casualties in those areas due to the increased volatility of the situation on the ground and the disruption of services. In some cases, UNAMI could only partially verify certain incidents. UNAMI has also received, without being able to verify, reports of large numbers of casualties along with unknown numbers of persons who have died from secondary effects of violence after having fled their homes due to exposure to the elements, lack of water, food, medicines and health care. For these reasons, the figures reported have to be considered as the absolute minimum.
****************
For more information, please contact: Mr. Samir Ghattas, Director of Public Information/Spokesperson
United Nations Assistance Mission for Iraq, Phone: +964 790 193 1281, Email: ghattass@un.org
or the UNAMI Public Information Office: unami-information@un.org
****************


Isaiah's THE WORLD TODAY JUST NUTS "She Lost" went up last night and he has another comic that will go up later today.