Okay, this is Isaiah's THE WORLD TODAY JUST NUTS   "She's Getting Desperate." 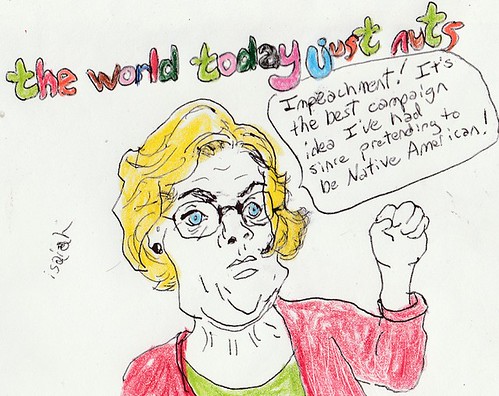 We'll get to Joe Biden in a moment, first David Cay Johnston.  For those who don't know him, he was never that well known, David had something of a career at THE NEW YORK TIMES.  It didn't end well.  As a friend at THE NATION reminded me this morning, it never ends well.  (David tried to write for THE NATION after his forced retirement from NYT and that didn't work out either.)  Today, whatever image he had is in tatters as he's made himself into a loony tune pursuing one conspiracy after another.  He would just be a portrait of poor mental health if he weren't also so pathetic and annoying.

David wrote this site years ago.  Whining about the spelling of his name.  I, he insisted, had left the t out of his name.  I had done no such thing.  Bob Somerby of THE DAILY HOWLER had.  We pulled a paragraph from TDH.  David was a rude blowhard but then again he is a White man of a certain age (entitlement just wafts off him) so, no, it wasn't a surprise that he was so rude.  I shared the e-mail with some of his co-workers (he was at NYT then) and we all had a good laugh at his expense.

I was kind. Well, I wrote a blistering response but then I was kind and didn't publish it (it still exists and could be published at any time -- and maybe it will if David doesn't go away).  I did notice then (and I confirmed it today) that Bob Somerby, who made the mistake if there was a mistake made (he was quoting a reader) never corrected it.  Again, to this day, Bob Somerby's never corrected it.

This despite David's claim in an e-mail to Ruth (she published it in full, see "F**k off, David Cay Johnston a woman hating piece of crap who thinks he can boss us around") that he has notified Bob Somerby.  Bob might not be able to correct it today -- he's switched sites since then -- but he could have corrected it after it first appeared, if he was contacted, he may have felt the screeching and strident David didn't warrant a correction or he may have felt one missed letter was not the end of the world.

David thinks it is and has smoe sort of notification system (I hope) when his name goes up.  Otherwise, he's just constantly Google-ing himself.  And he's that pathetic and desperate so maybe that is what he does.

I just know he was rude to me and I tried to high road it.  I'm not the only one looking at the e-mails (except on Sundays) and this story has always been known in the community.  In our community newsletters, we talked about Harvey Weinstein and many other pigs long before the mainstream media found the stories.  David was just one more little piggie in the syte.

Ruth's mentioned him at her site, in relation to this topic, many times over the years but he saw one post recently and had a fit.  So he decided to tell her she was wrong.  Because isn't that what every woman wants and needs?  A man to tell her she's wrong?

And he couldn't just share that he thought she was wrong, he had to offer his resume.  All these never ending details that, quite frankly, are meaningless.  It was pathetic and I've been on the receiving end of a multi-page whine from Warren Farrell when feminism kicked his tired ass to the curb and he just knew he could convince a few of us to stand with him.  I thought Warren was the most pathetic and then I read -- in Ruth's post -- David's e-mail.

In what world does a man think condescending endlessly to a woman, talking down to her, acting superior is going to result in her joy?

David's shocked that Ruth responded to him "with vile language."  I didn't open the e-mails -- there are two -- but I can read the first line without opening them.


David is a smug ass who thinks the world revolves around him.  Because, let's be honest, it used to.  As a straight, White man, he used to run things.  David, you poor fool, you're not running anything these days.  Not just because you're retired, please understand, but you're also not running anything because this isn't 2003.  Women have, as the cigarette add used to say, come a long way.  And we don't fret over you and your blustering.  You don't intimidate us. You especially don't intimidate Ruth, Betty or myself because we defended Hillary from sexist attacks in 2008, back when THE DAILY KOS was purging women and attacking women.  We didn't bat an eyelash at any of the rude or threatening e-mails.  We'd already been through it long before that.

Your day is over.  Or, as Sylvia Plath once put it, "You do not do, you do not do, anymore black shoe [. . .]."  I'm sorry that it's such a shock to you that you can't bully women.  I thought you would have learned that long, long ago.  But, as many of your co-workers can attest, you don't learn very easily, do you?

Last Thursday, I explained to you publicly that your e-mails would not be read and that you were not to use the public e-mail account.  It is not a place ofr limp and flaccid men to rage at women.  THE COMMON ILLS started as one site, my site.  And we sprung up as a community.  Mainly because this site values women, mainly because I don't let any man push me around -- many online bullies have tried.  I didn't come to feminism yesterday.  I wasn't surprised by all the men who showed up trying to be 'helpful' when the site started getting attention.  I wasn't surprised and I wasn't a fool.  Yes, men like David would have loved a centrist site where a woman minded her tongue and manners.  To which I say, f**k off.

We built this community and we built it by standing strong.  We don't get bullied.  We don't buckle.

I realize your life is pathetic and pretty much over.  Your name is a disgrace and you've made it such.  We will  not be bowing to your wishes.  Yes, you are sad and pathetic but, newsflash, David, I'm not your Mommy.  It' snot my job to burp you or wipe you or pretend like that awful finger paint drawing you just did shows promise.

Yes, growing up, you expected women to cater to you.  That was a different time, thankfully.

I mentioned Betty before.  Why bring Betty into it?  Because David's not content to just bother Ruth, he's going after Betty now as well.

I've said it before, that e-mail account does not exist for you, David.  I get it, you're sick and in need of mental healthcare.  Your rage and anger is apparent.  So get the help you need but stop clogging up my e-mail account with your crap.  I don't give a f**k about you, I never did.  Stop harassing the women of this community.  Stop your attempts at male dominance -- and doesn't that describe the e-mail you sent Ruth?  It's exhausting to read, the whole point appears to be to exhaust her.

David saw Betty's "David Cay Johnston is trash" and felt the need to correct her.  As an African-American woman, clearly Betty needs David to tell her what's what, right?  That's what he could have gotten away with a decade or two ago but it doesn't play that way today.   David has apparently not yet discovered Ann's "Princess David Cay," Marcia's "Oh, hell no, David Cay Johnston, sit your tired ass down" or Rebecca's "dickless david cay johnston, the loony conspiracy nut."

David never learned -- as a straight, White man, he never learned -- that it might be the smartest thing to just shut up.  Last Thursday, I said what I said and thought it was done.  There are so many issues that need to be addressed and focused on.  I thought, community wide, that's what we were going to do.  But here's David yet again, this time with two e-mails.

We're not going to be nice about this anymore.  I have deleted --as I said I would last Thursday -- both of David's e-mails.  They will not be read.  Nothing he writes to the public account will be read.  He's a vain and pathetic bully who needs to learn (a) women will not be intimidated by him and (b) one letter missing from his name is not the end of the world.  It really shows you just how pampered he has been his whole life that he thinks a "J" being dropped out of his last name is the end of the world. 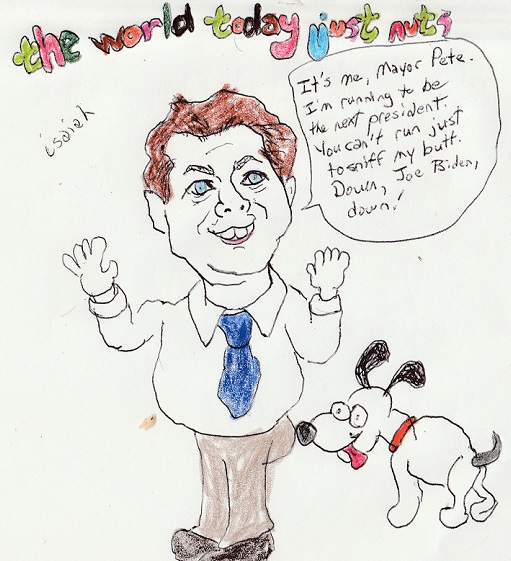 That's Isaiah's THE WORLD TODAY JUST NUTS "Joe Biden Sniffs Around Mayor Pete" which went up Sunday along with his "She's Getting Desperate."  Mayor Pete Buttigieg is the press favorite currently.  They have many press cycles to fill, there will be other favorites.  The press builds you up to have something to cover and then they tear you down for the same reason.  But Pete's at least eanred the press attention.

A man who served far too many terms as senator and a gaffe prone vice president who was forever off message or ahead of the roll out.  He's acting as though his run is the Beatles getting back together.  That the whole country is clamoring for it.  The US, the world, in fact, would be just fine without a Joe Biden run.  And the vanity on men, what is up with that?  David Cay, Joe Biden.  If you're going to run, you should have announced some time ago.  There's no great clamor for you to run.  You are the past, the very distant past and We The People are focused on the future.


Saturday brought news of another US service member dead in Iraq.

Carolyn Callahan‏ @CarolynWLKY 5h5 hours ago
A Kentucky soldier has died in Iraq. The Department of Defense says Spc. Ryan Riley died yesterday. His death was not combat related. Spc. Riley was from Richmond.

More on the KY soldier killed in Iraq. 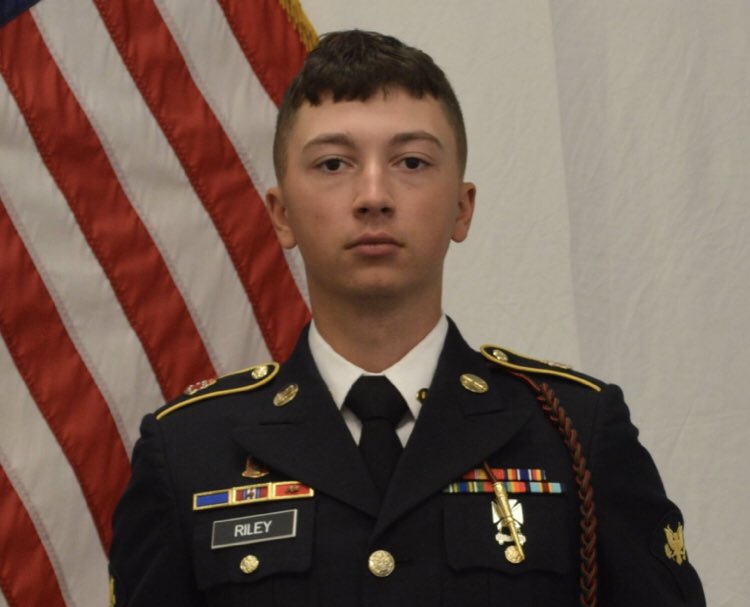 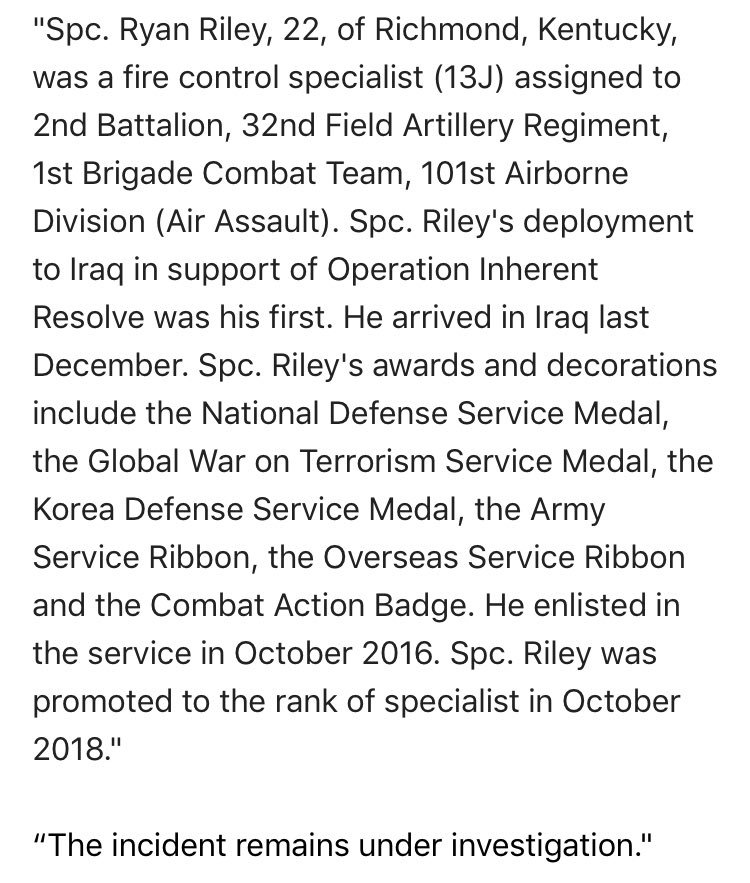 Ryan's dead.  And Joe voted for the Iraq War.  And Joe supported it for years in the US Senate.  And Joe admitted it was pointless (yes, he did, we're the only one who covered that hearing and we will be dredging it back up the minute he announces he's running).  The Iraq War continues.  It continues because of Joe and it was started because of Joe.

If Joe wants to announce his intent to run, the first words out of his mouth should be how he's going to end the Iraq War.


If he can't tell the American people that, he's got no real reason to run.
Posted by Ruth at 10:06 PM