Can Bill Press and Howard Finemann please shut up?

Lucy Flores has told her truth.  Bill Press and Howard Finemann have butted into the converssation to insist Joe Biden is wonderful.

Both men are elderly and have been in the press for years.  Neither ever felt the need to write about what Mr. Biden's groping might mean to women.  But now they want to rush in and try to seize control of the conversation.

It is time for them to shut up.

For at least two weeks, how about we let the women like Ms. Flores speak and share?

Just two weeks.  Surely, these big boys can shut their mouths for two weeks to allow women to discuss this topic.


Former Vice President Joe Biden's pursuit of the Democratic Party's presidential nomination hit another sag this weekend as the 2014 Democratic nominee for Lt Governor of Nevada, Lucy Flores, shared her experience of an invasive and boundary free Joe Biden and how he humiliated her.  Ruth dubbed him "Boundary-Free Biden."  Is it harassment or another example of Biden's sexism?  Stephen Collinson (CNN) explains:

An allegation by Nevada Democratic politician Lucy Flores that he once made her feel "uneasy" by smelling her hair and kissing the back of her head forced the former vice president's team into damage control mode over the weekend.
Biden said in a personal statement that while he did not recall the alleged incident, it is important for women like Flores to be heard.

Again, sexism or harassment?  Remember, his run for the 2008 nomination -- his failed run -- stumbled out of the gate with charges of racism over Joe's remarks about Barack Obama.

On Sunday, Lucy Flores spoke with Korva Coleman on NPR's ALL THINGS CONSIDERED:

COLEMAN: Ms. Flores, can you describe the encounter in your own words?

FLORES: Sure. Well, I mean, it's just as I described. It happened very suddenly. I was not expecting it. It was a campaign rally setting, so there was a lot of chaos, a lot of people, a lot of energy. We were all kind of in public. Vice President Biden and I were never alone together. So as we were waiting to be called up to the stage, the rally had already started. People were already speaking. We were waiting in line. Eva Longoria was in front of me. Joe Biden was behind me.
And, you know, I just all of a sudden feel his hands, and I feel him get up really close to me. And I'm just, you know, at that point processing, and I'm thinking, OK. This is really weird. But then he leans in, and then he, like, inhales. And then he proceeds to plant this long kiss on the top of my head. And the entire time, I'm just kind of, like, what is happening?

COLEMAN: As we mentioned, former Vice President Biden has released a statement and says if he did behave this way, he doesn't believe he acted inappropriately. What is your response to his statement?

FLORES: I need the vice president and all men and all people who are in positions of power to understand that in that setting, in that situation, that kind of behavior is absolutely inappropriate. A big part of the reason why I'm also speaking out now is because he has a history of this. This is not an unknown issue. There have been stories. There are pictures. There are videos. I think that there is a very severe disconnect and lack of empathy for what the women on the receiving end are feeling.
I understand that he's trying to clear up his intention. But it's not about your intention. Whether it was an innocent gesture, whether it was a sexual gesture - none of that matters. It is about the person on the receiving end of that inappropriate behavior by someone who is very, very clearly more powerful than you. That power dynamic is important to recognize.


Former Secretary Ash Carter and his wife Stephanie Carter are longtime friends of Joe Biden which is why it's no surprise that Stephanie has been trotted out to defend Joe Biden and minimize his own actions in public with her.  Before Stephanie's allowed to minimize again, every reporter repeating her claims needs to acknowledge that she's been provided to the press by Joe's 'exploratory' campaign.  This is not a woman coming forward on her own or as an independent agent the way Linda Flores did.  This is a woman allowing herself to be WHORED by a political campaign -- and that's the only word for it.

A woman has come out and made a serious and honest charge and Stephanie is trotted out to WHORE and to minimize what Joe did.

There's no need to hide behind skirts, Joe, so stop doing.  And stop setting one woman against another.  That's not presidential.  It also dishonors the six women -- a record breaking six women -- running for the party's presidential nomination this year.

Stephanie Carter is dishonest by stepping forward at the urging of Joe Biden and his handlers.  It's a WHORE move and it's outrageous that she thinks her nonsense in any way trumps what happened to Flores.  She should be ashamed of herself.

ADDED: For those not getting it, Stephanie Carter could have told her story (her cover story) at any time.  The incident took place in 2015.  She waits until Flores steps forward to discuss her own 2014 incident.  After Flores speaks out, Stephanie shows up to undercut her.  That makes her a whore.  She's had nothing to say for four years but let a woman speak out and call out Joe and all the sudden Stephanie agrees to write the requested piece -- and it was requested.

For those who need the slow walk, woman A steps forward to share something painful and embarrassing.  In less than 24 hours, woman B shows up to cover for a man by insisting the same thing happened to her and she didn't mind.  It's whoring.  It's undercutting another woman and the pain she felt.  Stephanie has allowed herself to be used to undercut a woman in service of a man.  That's not sisterhood.  It is whoring.

On today's MORNING EDITION (NPR) reports on Biden's actions with Flores and they also fail to note that Stephanie Carter's actions are not spontaneous but were taking at the urging of others.


March 15th's snapshot covered the Senate Armed Services Committee hearing the day before and we noted we would come back to Warren:

US General Joseph Dunford, who is the Chair of the Joint Chiefs of Staff, made his "fourth and final appearance" before the Senate Armed Services Committee on Thursday "in support of the Department's annual budget request."  Also appearing before the Committee was Acting Secretary of Defense Patrick M. Shanahan.  The topic was the Defense Dept's budget.
[. . .]
Senator Elizabeth Warren questioned the increase in the budget and we'll note that in another snapshot, including her statement that the budget was establishing  "a slush fund to hide what's happening with Defense spending."


Let's note some of that exchange today.

Senator Elizabeth Warren: So the administration has submitted a national defense budget request for $750 billion for next year.  That is a pretty big number even by the Department's own standards.  In fact, the budget rules that govern how much money is available for defense spending is set at $576 billion dollars -- which is still a huge sum.  But you're requesting $174 billion more than the amount that is allowed by law.  $165 billion for the overseas contingency operations (OCO), and another 9 billion for emergency funds for the wall.  Now some of the things in the DOD budget seem to me to point in the right direction -- more investments in research, for example -- and we need to have a much larger conversation about whether these budget caps make sense and how defense and non-defense priorities should stack up.  But right now, I just want to dig into how you got your numbers so that all of the non-defense experts out there can understand the tricks the administration is using to justify sky rocketing defense spending.  Secretary Shanahan, the Department proposes to get around the budget rules by requesting that $165 billion in the OCO account.  The amount in the OCO account is not counted towards statutory budget caps.  Is that correct?  [Sec Shanahan nods.]  Okay, so let's dig in a bit on OCO.  As the cost to fight the war in Iraq and Afghanistan began to increase in the early 2000s, Congress had to pass emergency budgetary supplementations every year.  So in 2009, President [Barack] Obama established OCO so that they could set aside funds for this and other operations.  Because those funds are for emergencies, they don't count toward the overall limits in defense spending, as you just said.  This year's OCO request is a 140% increase from the 69 billion you requested in last year's OCO budget.  So tell me, did the cost of supporting our overseas operations suddenly increase by 140% last year?

Secretary Patrick Shanahan:  Senator, they did not.

Senator Elizabeth Warren:  They did not.  Okay. In fact, the last time OCO account was even close to the amount you've proposed for next year was in 2010 when we had approximately 100,000 deployed in Afghanistan and another 50 to 100,000 deployed in Iraq.  Today, we have about 21,000 troops in Iraq, Afghanistan and Syria combined -- a number that's largely unchanged from last year.  So let me ask another question, has the department deployed a large number of troops to fight a war someplace other than Iraq, Syria or Afghanistan?

Secretary Patrick Shanahan:  Senator, no we have not.

Senator Elizabeth Warren:  Okay, so the actual cost of supporting operations overseas did not increase by 140% and we haven't lost a war someplace else triggering that kind of an emergency.  And yet you're asking for $165 billion for "overseas contingency operations."  I just want to be absolutely clear so the taxpayer understands, you're requesting funding in OCO to fund activities that have nothing to do with the reason that OCO was established.  Is that correct?


So now they try to bury it.  We'll try to note more on the above exchange later this week.  I do want to object to the move Barack made in 2009.  The Congress was supposed to no longer be used as a blank check/ATM when it came to war spending.  OCO did nothing to change that.

The larger point, the one Elizabeth is making, is that money goes to where we send it and if we want certain things, we have to prioritize.  That's a household budget.  The Congress is no different.


Margaret Griffis (ANTIWAR.COM) has tracked the deaths for March. 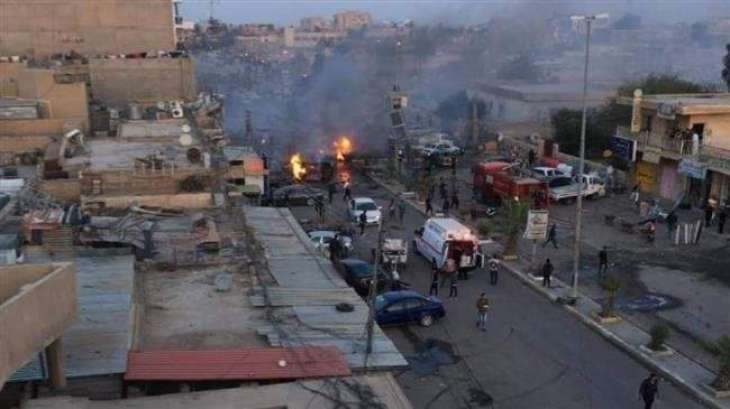 Yes, the war continues and so does the dying.


As we noted Friday, figure head and puppet Barham Salih is insisting there is no opposition to US troops remaining in Iraq.  AP observes, "Salih’s comments stand in stark contrast with that of mostly Iran-backed deputies in the Iraqi Parliament, who say they are preparing draft laws calling for a full withdrawal of U.S. troops now that the war against ISIS is over."


Authorities in Iraq have arrested the owners of a ferry that capsized in Mosul killing nearly 100 people.


In a statement on Sunday, the Supreme Judicial Council announced the arrest of the boat's owners as well as three engineers who "had certified that it complied with regulations".


It's over 120 killed, 120 was the number by one day after the disaster.  Second, the ferry owners probably do deserve to be arrested.


They aren't the only ones who deserve to be arrested.  The government ignored all these established rules and laws. This is a point that former governor Atheel al-Nujaifi (his term was ended in 2014) has made clear in his critique of the ferry disaster.

Punishing those officials is needed.  Until it happens, until it happens publicly and the people of Iraq -- including officials -- grasp that there will be legal accountability for failure to provide public safety, tragedies will continue.  Especially right now, during the flooding.