National Review‏Verified account @NRO 10h10 hours ago
How Much Does Hillary Clinton Drink? http://bit.ly/2rdFCyZ  via @RKyleSmith 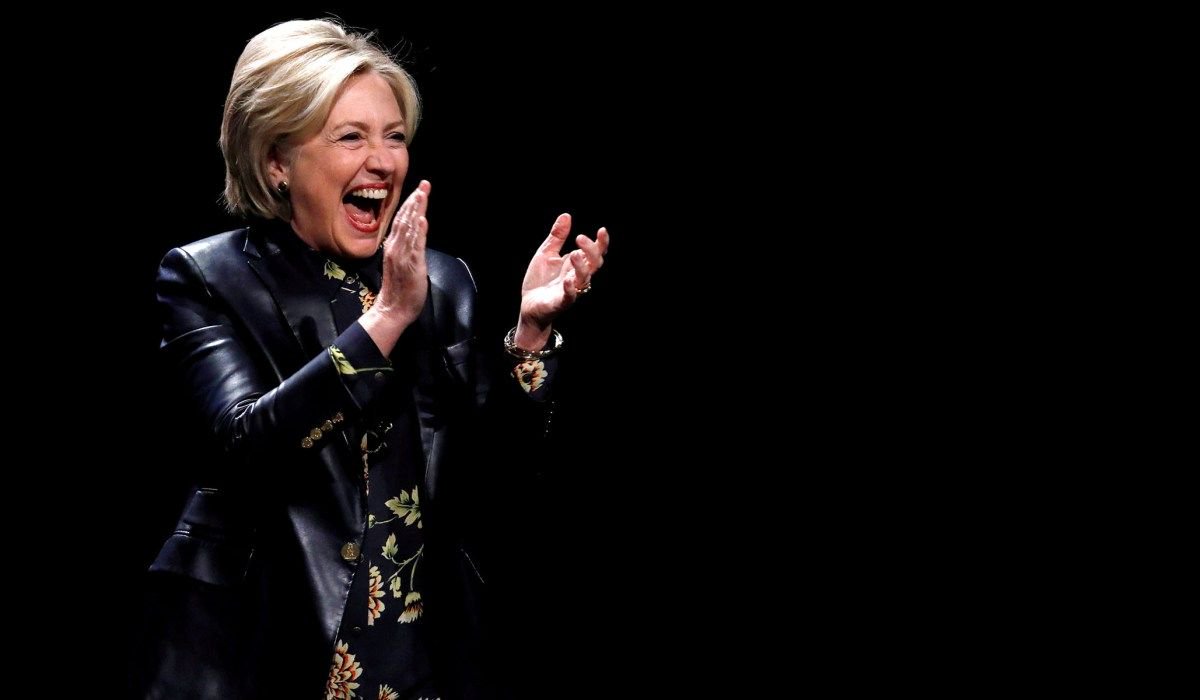 Sadly, for Hillary Clinton, it is not just the right-wing NATIONAL REVIEW commenting.

Patricia‏ @pmcdonald16 5h5 hours ago
Replying to @davidharsanyi
@HillaryClinton makes Gerald Ford look like a teetotaler... OF COURSE she’s drunk on a regular basis - how else do you explain habitual falling & violent outbursts?
0 replies0 retweets0 likes

Robert Everett‏ @Robert29103 1h1 hour ago
Replying to @NRO @rkylesmith
Hatemonger Hillary Clinton's drinking bouts are as legendary as her temper, her racism and her FOUL mouth!!!!
0 replies0 retweets0 likes


What do elections mean?


May 12th, elections are supposed to take place in Iraq.  Ali Jawad (ANADOLU AGENCY) notes, "A total of 24 million Iraqis are eligible to cast their ballots to elect members of parliament, who will in turn elect the Iraqi president and prime minister."  RUDAW adds, "Around 7,000 candidates have registered to stand in the May 12 poll, with 329 parliamentary seats up for grabs."  AFP explains that the nearly 7,000 candidates includes 2014 women.   RUDAW also notes that 60 Christian candidates are competing for the five allotted minority seats.  How do they elect the prime minister?  This comes after the general election and is based on who won seats in the election.   Abdulrahman al-Rashed (AL ARABIYA) explains, "To win the premiership, a candidate needs to win the majority of the votes, i.e. the votes of 165 MPs out of 329. Since it is a multi-party system, it is almost impossible to win these votes without sealing political alliances. The governorate of Baghdad is the most important one because it is the largest with 69 seats."  The chief issues?  Mustapha Karkouti (GULF NEWS) identifies them as follows, "Like in previous elections, the main concerns of ordinary Iraqis continue to be the lack of security and the rampant corruption."

As noted in the April 3rd snapshot, pollster Dr. Munqith Dagher has utilized data on likely voters and predicts that Hayder al-Abadi's Al-Nasr will win 72 seats in the Parliament, al-Fath (the militias) will get 37 seats, Sa'eroon (Moqtada al-Sadr's new grouping) will get 27 seats, Nouri al-Maliki's State of Law will get 19 seats, al-Salam will get 18 seats (KDP and PUK parties for the Kurds), Ayad Allawi's Wataniya will get 15 seats. There are others but Dagher did not predict double digits for any of the other seats. The number are similar for the group of those who are extremely likely to vote (Hayder's seats would jump from 72 to 79 seats).  Other predictions?  The Middle East Insstitute's Fanar Haddad insists to Sammy Ketz (AFP) that the post of prime minister will come down to one of three people: Hayder al-Abadi (current prime minister), Nouri al-Maliki (two time prime minister and forever thug) or Hadi al-Ameria "a leader of Hashed al-Shaabi, a paramilitary network that played a pivotal role in defeating IS. Ameri comes from Diyala province and is a statistics graduate from Baghdad University. He fled to Iran in 1980 after Saddam executed top Shiite cleric Ayatollah Mohammed Baqr al-Sadr. The 64-year old is widely viewed as Tehran's favoured candidate."


1001 IRAQI THOUGHTS has a poll of Iraqis -- there's no margin of error so take the poll for what you think it might be worth.  This is what they see as the polls chief findings:

Of the findings they offer -- again, take it for what it's worth, it appears to be more of a lunch time poll than a scientific one -- there are two that are more revealing than the above three.  First of all, the election is 11 days away (the poll took place between April 22nd and 28th) and the top vote getter was Hayder al-Abadi (current prime minister) with 24% yet 26% was the largest grouping and it was undecided.  People really don't know how they're going to vote?  If the results are accurate that would suggest that a large number of undecideds will not be voting.  When you've got no opinion that close to an election, you have no strong motivating factor for upsetting your day to get to a polling station.

The other key finding?  17% stated they would not be voting and, 63% of that 17%, when asked why not, chose "there are no qualified candidates."


Iraq’s Election coming, nothing will change, we are going to voting like a sheep without think to what we want to get. They will  feed us to slay us.


Ahead of Iraq's elections this month, a satirical TV show is resurfacing candidates' broken promises


First-time voter says, ‘I don’t have any hope in the political parties — I don’t believe in the parties and their campaigning.’ #IraqElection

One development this go round -- as noted in the top Tweet -- is the attention being given to female candidates.  Suadad al-Sahly (ARAB NEWS) notes:


This is the first time, however, that the participation of female candidates has generated such widespread public interest among an electorate used to taking a cynical view of more established politicians linked to corruption and sectarian violence.
Ziena Al-Shimari, another female candidate in Baghdad, told Arab News she had been granted permission to run by the head of her tribe and was now determined to stand up for the rights of a new generation of Iraqis.
“I am calling on us to unify the Arab tribes because they support the young while the state does not,” she said.Since campaigning began on April 14, the images of the women have given rise to a range of reactions, from anger and mockery to adulation and pride.


According to 1001 IRAQI THOUGHTS (see earlier for link), the top vote getter will be Hayder al-Abadi, second place will be a battle between Ammar al-Hakim and Shi'ite cleric and movement leader Moqtada al-Sadr while Nouri al-Maliki will be a distant fourth.  Nouri was a two term prime minister and is a forever thug.  Ibrahim al-Marashi (MIDDLE EAST EYE) offers:


The importance of examining the Shia parties and coalitions is that the next prime minister of Iraq will be chosen from among these factions, and that candidate will determine the fate of Iraq's national unity.
A recent nationwide poll conducted between 17-21 March and featuring respondents across all 18 provinces indicated that 60 percent of voters remained undecided, an indicator that the outcome is still not certain in a vote that is little more than two weeks away.
Iraq's various parties usually form coalitions going into each election to maximise votes. In the lead-up to the 2018 vote, Iraq's rival Shia coalitions include incumbent Prime Minister Haidar Abadi, who will run for reelection as the head of the "Victory of Iraq" (Nasr al-Iraq) coalition, its name capitalising on the Iraqi victory over IS. Polls indicate it has the highest number of potential voters at 15 percent.
The second faction, polling in second at 5 percent, is former prime minister Nouri al-Maliki, who stepped down in 2014 but is seeking a political comeback. He leads the "State of Law" (Dawlat al-Qanun) coalition, using the name he came up with during the 2010 electoral campaign.
Both Abadi and Maliki are politicians from al-Dawa Party, a party that had united during Iraq's first elections in 2005, but since then has split around loyalty to two political personalities rather than an ideological divide.