Does James Comey ever shut up?

I do not get the need by former officials to comment on everything.  That includes Ben Rhodes and Tommy Vietter.  It especially includes James Comey, the former F.B.I. director who is likely to be a witness in any case Special Counsel Robert Mueller puts up.  So why is Mr. Comey making all these comments?  From POLITICO:

Former FBI Director James Comey on Thursday rebuked Rudy Giuliani, a member of President Donald Trump's legal team, for referring to bureau officials as “stormtroopers,” saying U.S. leaders should be emulating federal law-enforcement officias “rather than comparing them to Nazis.”
During an interview Wednesday on Fox News, Giuliani blasted an FBI raid of the offices and home of Trump's longtime personal attorney, Michael Cohen. Giuliani framed the seizure of documents as a disproportionate action in the FBI investigation into Cohen‘s payment to adult film actress Stormy Daniels, who says she was paid to keep quiet about a sexual encounter with Trump.
Giuliani characterized the raids as “big stormtroopers coming in and breaking down his apartment and breaking down his office.” The remark appeared to reference a paramilitary wing of the Nazi Party — known as the Sturmabteilung, or Storm Detachment — that played a role in the rise of Adolf Hitler.
I am sorry, Mr. Comey, but that is not a new term.  The late Gore Vidal is among the many who have used the term.  I remember hearing him speak about some F.B.I. raid where a mother was shot while holding her child.  That was Ruby Ridge and I believe most would agree that the F.B.I. acted like storm troopers.

Thursday, May 3, 2018.  Hobby Lobby's back in the news while elections in Iraq are nine days away.

Hobby Lobby is back in the news again.

The Hill‏Verified account @thehill 9h9 hours ago
US returns thousands of stolen artifacts smuggled out of Iraq by Hobby Lobby hill.cm/oHKnDTG

Those ancient artifacts that were illegally smuggled to Hobby Lobby after they were falsely labeled as "tile samples" are now being returned to Iraq cnn.it/2KwgRam 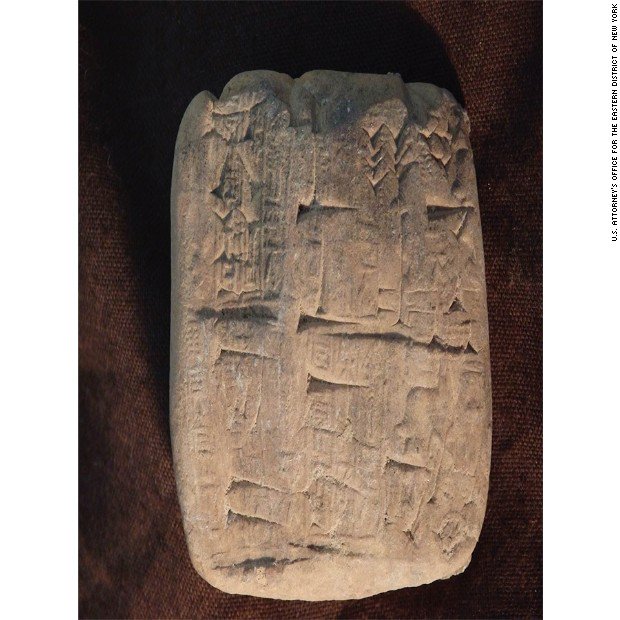 
Susannah Cullinane (CNN) explains, "The move comes after ICE and the Justice Department last year brought a civil action against Hobby Lobby, saying it had received thousands of falsely labeled Iraqi artifacts from a United Arab Emirates-based supplier. Hobby Lobby in July agreed to forfeit the artifacts and pay a $3 million fine to resolve the action."


May 12th, elections are supposed to take place in Iraq.  Ali Jawad (ANADOLU AGENCY) notes, "A total of 24 million Iraqis are eligible to cast their ballots to elect members of parliament, who will in turn elect the Iraqi president and prime minister."  RUDAW adds, "Around 7,000 candidates have registered to stand in the May 12 poll, with 329 parliamentary seats up for grabs."  AFP explains that the nearly 7,000 candidates includes 2014 women. Ali Abdul-Hassan and Sinan Salaheddin (AP) report, "Iraqi women account for 57 percent of Iraq’s population of over 37 million, according to the U.N. Development Program, and despite government efforts to address gender inequality, the situation for Iraqi women has declined steadily since 2003.  According to the UNDP, one in every 10 Iraqi households is headed by a widow. In recent years, Iraqi women suffered further economic, social and political marginalization due to decades of wars, conflict, violence and sanctions."    RUDAW also notes that 60 Christian candidates are competing for the five allotted minority seats.  How do they elect the prime minister?  This comes after the general election and is based on who won seats in the election.   Abdulrahman al-Rashed (AL ARABIYA) explains, "To win the premiership, a candidate needs to win the majority of the votes, i.e. the votes of 165 MPs out of 329. Since it is a multi-party system, it is almost impossible to win these votes without sealing political alliances. The governorate of Baghdad is the most important one because it is the largest with 69 seats."  The chief issues?  Mustapha Karkouti (GULF NEWS) identifies them as follows, "Like in previous elections, the main concerns of ordinary Iraqis continue to be the lack of security and the rampant corruption."

As noted in the April 3rd snapshot, pollster Dr. Munqith Dagher has utilized data on likely voters and predicts that Hayder al-Abadi's Al-Nasr will win 72 seats in the Parliament, al-Fath (the militias) will get 37 seats, Sa'eroon (Moqtada al-Sadr's new grouping) will get 27 seats, Nouri al-Maliki's State of Law will get 19 seats, al-Salam will get 18 seats (KDP and PUK parties for the Kurds), Ayad Allawi's Wataniya will get 15 seats. There are others but Dagher did not predict double digits for any of the other seats. The number are similar for the group of those who are extremely likely to vote (Hayder's seats would jump from 72 to 79 seats).  Other predictions?  The Middle East Insstitute's Fanar Haddad insists to Sammy Ketz (AFP) that the post of prime minister will come down to one of three people: Hayder al-Abadi (current prime minister), Nouri al-Maliki (two time prime minister and forever thug) or Hadi al-Ameria "a leader of Hashed al-Shaabi, a paramilitary network that played a pivotal role in defeating IS. Ameri comes from Diyala province and is a statistics graduate from Baghdad University. He fled to Iran in 1980 after Saddam executed top Shiite cleric Ayatollah Mohammed Baqr al-Sadr. The 64-year old is widely viewed as Tehran's favoured candidate."

Tough road for Iraq’s female candidates in May 12 elections ternopilinkling.com/2018/05/03/tou…

Sinan Salaheddin‏ @sinansm 3h3 hours ago
“One of the most important women’s issues in Iraq that needs to be urgently addressed is marginalization," a female candidate tells @AP. My latest on female candidates running for parliament in #Iraq's May 12 election w/help from cameraman Ali Abdul-Hassan
0 replies8 retweets2 likes


From the AP report:

Sex videos have been widely circulated on social media purporting to show female candidates in bed with men, as well as photos allegedly showing candidates posing in underwear or revealing outfits.
One such video — which she dismissed as a “fabrication aimed at pushing her out” — forced Intidhar Ahmed Jassim, allied with Prime Minister Haider al-Abadi’s Victory Alliance party, to withdraw from the race.
In Iraq’s southern Najaf province, tribal arbitration was held over a video showing a young man kissing the poster of a female candidate from another tribe. The outcome: he apologized, the apology was accepted and the female candidate’s tribe even declined compensation for the insult.
Alarmed by the unseen level of harassment, the U.N. chief’s special representative for Iraq, Jan Kubis met last month with several women candidates over the “alarming situation” and “vulgar acts” targeting women, which he said only undermines the democratic process.

“Those behind defamation, cyber bullying and harassment are trying to scare you off,” Kubis told them, adding that the perpetrators are “afraid of educated, dynamic, qualified, courageous and open-minded women candidates that rightfully claim their space and meaningful role in political life of Iraq.”


Meanwhile, Hayder al-Abadi, the current prime minister of Iraq, wants a second term.  As Elaine noted last night,  Hayder's 2014 promise to address corruption has amounted to nothing.  He's staked his entire reputation on his 'success' in addressing ISIS.  When he became prime minister, ISIS controlled the city of Mosul.  He likes to boast that he's defeated ISIS and reclaimed Mosul.  Mahmoud al-Najjar, Gilgamesh Nabeel and Jacob Wirtschaffer (USA TODAY) explain:


Nearly a year after Iraqi Prime Minister Haider al-Abadi declared this war-devastated city liberated from the Islamic State, a putrid odor still fills the air from thousands of corpses left in the rubble.
The bodies of both civilians and Islamic State militants can be found throughout Mosul, once Iraq's second-largest city, abandoned in bombed-out buildings, tossed in roadside rubbish heaps or discarded in and around the Tigris River.


While those on the campaign trail are doing their best to sell themselves and their positive vision of Iraq, the people they are trying to convince seem split about the vote.


Mechanic Abu Fayez, 41, has been waiting for hours to receive his voter registration card.
"After the liberation of Mosul it is a national duty to vote to change our lives and not just take advantage of the day off as during previous elections to have a holiday," he tells AFP, his hands and trousers stained with oil.


"We must... elect people who will genuinely represent us and obtain compensation for the material and moral damage we suffered."


Let's close with this:

From the US State Dept:

Announcing the Recipients of the 2018 Emerging Young Leaders Award


In recognition of the positive role young people play in building sustainable peace, the U.S. Department of State is honoring outstanding young leaders from around the world.  On Wednesday, May 2, the ten recipients of the third annual Emerging Young Leaders Award will be acknowledged in a public ceremony at the State Department for their efforts as partners for peace and drivers of economic growth and opportunity.
The 2018 awardees are:
Sara Abdullah Abdulrahman, Iraq
Diovio Alfath, Indonesia
Ece Çiftçi,  Turkey
Tanzil Ferdous, Bangladesh
Zina Salim Hassan Hamu, Lithuania
Dania Hassan, Pakistan
Nancy Herz, Norway
Isasiphinkosi Mdingi, South Africa
José Rodríguez, Panama
Firuz Yogbekov, Tajikistan
These 10 remarkable young people will visit the United States for an intensive program, April 29 to May 12, specially designed to expand their leadership capacities, strengthen their knowledge of management strategies in the non-profit, government and private sectors, learn and share best practices, and broaden their networks of resources and support. The exchange program provides skills training to set awardees on paths for increased collaboration on global issues affecting youth, particularly those involved involved in building peace, combating extremism, and empowering youth.
Learn more about the award and exchange program at exchanges.state.gov/eyl.
The Emerging Young Leaders award ceremony will take place on May 2 at the U.S. Department of State, and will be open to credentialed members of the media.  Interested media should contact the Bureau of Educational and Cultural Affairs at eca-press@state.gov.  Follow the conversation online with #EYLeaders and @ECAatState.