How many people were spying on the Trump campaign?

Michael Caputo was a part of the Donald Trump 2016 campaign.  He left in June of that year.  Now he has stepped forward to reveal that C.I.A. asset Stefan Halper was not the only one spying on the Trump campaign.  Frank Miles (FOX NEWS) reports:


Caputo said he was approached in early May 2016 by an intermediary “who had been talking to a government official” looking to connect with the Trump campaign -- purportedly to hand off Hillary Clinton-related emails.
Caputo told Cavuto that this intermediary is a friend of his willing to go on the record at the right time. He noted both were amazed to be contacted from a government organization, which he didn’t name.
Caputo said actual staff members of the government agency had Clinton’s emails. He noted he didn’t want possession of these emails, thinking they might be classified documents. He urged the intermediary to go through proper whistleblower channels.

Mr. Harper is July of 2016.  Now we are being told that two months before that, another attempt was made.

Tuesday, May 22, 2018.  Who created ISIS, will Turkey be allowed on the ground in Iraq under the next prime minister and other questions.


Strange, isn't it?  Tommy Vietor, Ben Rhodes, Susan Rice and Samantha Powers -- among so many others -- don't address that Tweet but they're online constantly.  They're the former administration that can't shut the f**k up -- though goodness knows they should.  Corrupt and known for lying, they just keep going, pretending that someone needs them, that they're of the people when the truth is, they work the basement of the bordello.

From way down below to the air space above Iraq, WORLD BULLETIN reports Turkish war planes bombed three areas of northern Iraq yesterday.  As always, they claimed they only targeted the PKK.


The PKK has headquarters in the mountains of northern Iraq which had created problems for the KRG and Turkey.    Aaron Hess (International Socialist Review) described the PKK in 2008, "The PKK emerged in 1984 as a major force in response to Turkey's oppression of its Kurdish population. Since the late 1970s, Turkey has waged a relentless war of attrition that has killed tens of thousands of Kurds and driven millions from their homes. The Kurds are the world's largest stateless population -- whose main population concentration straddles Turkey, Iraq, Iran, and Syria -- and have been the victims of imperialist wars and manipulation since the colonial period. While Turkey has granted limited rights to the Kurds in recent years in order to accommodate the European Union, which it seeks to join, even these are now at risk."

They apparently finally found some terrorists (or at least some fighters) when they finally left their war planes.  ANADOLU AGENCY reports, "Two Turkish soldiers were killed during an attack by outlawed Kurdistan Workers’ Party (PKK) militants in northern Iraq, the Turkish army said on May 21. In a written statement, the Turkish General Staff said two soldiers were also wounded in the attack." 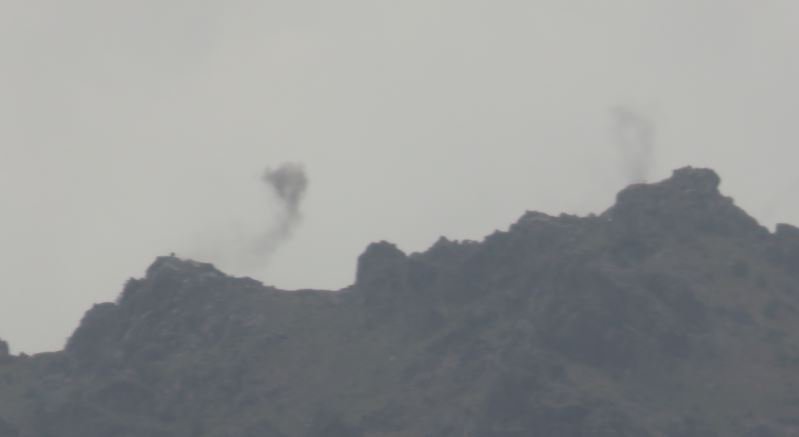 
The PKK and Turkey have been fighting for decades.  Nouri al-Maliki, in 2012, when he was prime minister, promised to end the PKK but he didn't.  When does this end?

Moqtada al-Sadr, as we've noted repeatedly, does not want foreign forces in Iraq.  The western press portrays that as US troops.  But it's not just the US troops he objects to.  Turkish troops have been very controversial in Iraq with most Iraqis feeling their country's sovereignty is violated by having Turkish troops on the ground (or even bombing the country from war planes).  In a new Iraq, Turkey could find itself expelled.

Nationalist Sadr’s Iraq election wins surprises regional rivals “Under Sadr, Turkey will be forced to pack up and leave. He wants Iran and Turkey out.” @D_abdulkader told @ahval_en By @vvanwilgenburg Unexpected shifting #geopolitics

DOZENS of foreign ISIS brides are being sentenced to death in Iraq as the country exacts its revenge after three years of jihadi occupation.
Begging that they themselves are victims, the women were given 10 minutes to plead for their lives before judges decide their sentence.


Up to 1,000 women accused of belonging to Isis were rounded up from the ruins of Iraq’s towns and cities and are now being held in Baghdad to face a reckoning from a society and government that remains deeply scarred by the past four years, with much of their anger directed at foreign fighters and their families. Up to 820 infants accompany the women, with some others yet to be born.
The proceedings had a sense of urgency, and so did the 10-minute hearings in Baghdad’s central criminal court that have summarily dispensed with the accused foreign women, sentencing more than 40 to death, and dozens more to life in prison since the so-called caliphate crumbled.


Who is Moqtada al-Sadr?  The Shi'ite cleric and movement leader has been a public fixture since the start of the Iraq War but that doesn't stop the western press from treating him like a riddle after this month's election.  In an otherwise worthless piece for TIME, James Muldoon and Yasamin Alttahir offer:

The average Iraqi living outside Baghdad still can’t reliably switch on a light or run a shower, let alone find a job with a living wage paid on time or attend a decent school.
Al-Sadr’s electoral victory is indicative of the Iraqi people’s rejection of self-serving Western intervention in the country. While the West has been preoccupied with gaining political influence, a real opportunity has been squandered to foster a culture of democracy and respect for human rights. The Iraqi people are now fed up with a lack of progress on addressing poverty, corruption and the need for essential services.

A better analysis is offered at the US Congress funded US Institute of Peace by Sarhang Hamasaeed:

What does Shia cleric Moqtada al-Sadr’s surprise showing mean in terms of the future of the Iraqi parliament?

Al-Sadr’s lead, should he be able to maintain it, will give him a strong position in the Council of Representatives (Iraq’s parliament), which in turn will give him a chance at building the biggest block for choosing the prime minister and forming the new government. In most scenarios, he could play a role as kingmaker. He will continue to push for reforms, as he is has increasingly done in recent years, and is supported by an active constituency that he has shown he can bring to the street for public support. In Iraq, coalitions always change after the elections, so al-Sadr’s coalition could grow stronger or fragment.
It is worth noting that al-Sadr’s strong showing is relative to the poor performance of other leading figures, among other factors. For example, incumbent Prime Minister Haidar al-Abadi and his immediate predecessor, Nouri al-Maliki, had their votes split within their al-Dawa party.


What does al-Sadr’s electoral victory say about anti-Iran sentiment in Iraq? Has Tehran lost influence?

It is true that al-Sadr has grown unpredictable and distanced himself from Iran, but he still maintains a relationship although his pre-election alliance represented a more cross-sectarian Iraqi sentiment. However, Iran-backed parties and coalitions also fared well. For example, the Fatih coalition that represents the interests of the Popular Mobilization Forces (PMF) and is supported and favored by Tehran, secured the second highest number in many provinces according to the preliminary results, a significant increase that will allow them to provide legal, political and economic aid to the PMF. However, it is still too early to determine the net effect of the elections on Iran’s influence.


How will the United States deal with Moqtada al-Sadr, as he will likely play a key role in choosing the next Iraqi prime minister?

Should al-Sadr’s coalition be able to form a government it will create complex dynamics for him and the United States. The joint history of hostility looms large and will make it difficult for both sides to work with each other. Even if they may not state that publicly, there is mutual benefit to both sides to find a way to work with each other even if indirectly. If al-Sadr can pull Iraq away from Iran (not necessarily toward the U.S. or Sunni countries) to stand on its own, it is good news for the U.S. and the Gulf countries. In the same way, security and political support from the U.S. to Iraq and its institutions will increase the chances of the next government of Iraq succeeding and relying less on influential neighbors who seek to compensate their support with influence inside the country.

The U.S. has indicated that they have a good relationship with the government of Iraq and hope to continue that even if a new prime minister is chosen. Al-Sadr has been increasingly open to international support to Iraq in the past few years. It is possible both sides can have their interests served.

Iraqis are increasingly resolving their differences nonviolently, says @sarhangsalar. Moqtada al-Sadr and others have gone from leading militias to organizing sit-ins, and that's a positive sign, he says. #IraqsNextStep
0 replies5 retweets6 likes


Nouri al-Maliki, former prime minister and forever thug.  Things didn't work out very well for him, did it?

He is responsible for the rise of the Islamic State in Iraq -- the Sunni group got its standing from Nouri's non-stop persecution of Sunnis.

To her credit, Hillary Clinton publicly labeled Nouri a thug in a 2008 Senate hearing.

But Barack played footsie with Nouri.  Mainly because Samantha Power assured Barack that Iraq needed a "strong man" and that the man was Nouri.  So, in 2010, when Nouri lost in the elections, Barack overturned the results with The Erbil Agreement in order to give Nouri the second term that the Iraqi people didn't want him to have.

He was already a known thug -- again, Hillary publicly labeled him such in a 2008 Senate hearing -- and he only got worse.  Secret jails and prison, kidnapping journalists who dared to cover protests, arresting people who had committed no crimes (and were not accused of committing any), disappearing them and so much more.

But Barack stood by him.


They had a falling out.

Nouri was caught unaware.  It was after the 2012 US presidential election, the day after, and Nouri called the White House to congratulate Barack.

Barack refused to take the call and pushed him off on Joe Biden.

Even so, Barack did nothing to help the Iraqis suffering.

In March of 2013, they directly appealed to Barack.

Iraqis in Samarra with a message for the world (photo via Iraqi Spring MC).
He ignored them before finally, over a year later, informed Nouri there would be no third term.  Barack then made Hayder al-Abadi the prime minister of Iraq.
Having done the bidding of the US government for so long, Nouri was hurt.  He's still hurting.  And he's still out of power.