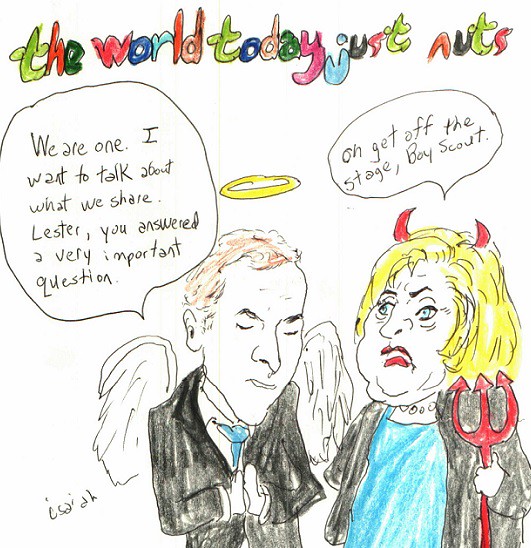 Hillary Clinton’s spokesman accused the Intelligence Community Inspector General Wednesday of working with Republicans to attack the Democratic presidential front-runner.
“I think this was a very coordinated leak,” Brian Fallon said on CNN. “Two months ago there was a...report that directly challenged the finding of this inspector general, and I don’t think he liked that very much. So I think that he put two Republican senators up to sending him a letter so that he would have an excuse to resurface the same allegations he made back in the summer that have been discredited.”
The comments came after Inspector General Charles McCullough III told senators that he believes at least several dozen of emails Clinton sent and received while she was secretary of state contained classified material at the highest levels, according to a letter obtained by McClatchy.


It is never Hillary Clinton's fault.

It is always the fault of someone else.

And the Hillary Clinton thing to do is to accuse and slander.

To distract from the charges by launching personal attacks.

Because that is how liars handle allegations.


Wednesday, January 20, 2016.  Chaos and violence, the US government plans more US troop deployments to Iraq, the Peshmerga are highlighted in a report by Amnesty -- about their targeting civilians, and much more.

Barack Obama's plan for Iraq is bomb, bomb some more and send US troops in.

And the lack of a real plan for anything more than more of the same is clear in the talk as well.

In an apparent chatty mood yesterday while flying into Paris, US Secretary of Defense Ash Carter talked with reporters. Dan Lamothe (WASHINGTON POST) reveals the chatty Carter declared that more US troops will likely be headed to Iraq ("The president has indicated that wherever there is additional opportunity to make a difference according to the strategy, we'd be willing to do that") and that this is due to the 'success' in Ramadi. Andrew Tilghman (MILITARY TIMES) notes, "U.S. military officials are in high-level talks with the Iraqis about potentially sending hundreds of additional troops to Iraq for training and supporting the upcoming invasion of the Islamic State group’s stronghold in Mosul."
It's no longer just Ash Carter going public, Kristina Wong (THE HILL) reports:
The United States might send more trainers to Iraq to help local forces retake Mosul from the Islamic State in Iraq and Syria (ISIS), a U.S. defense official said Wednesday.
"The reason we need new trainers or additional trainers is because that's really the next step in generating the amount of combat power needed to liberate Mosul," said Army Col. Steve Warren, a spokesman for the ISIS effort.
Carter's remarks came up in today's US State Dept press briefing moderated by spokesperson Mark Toner.


QUESTION: And in fact, today – I think it was today – Secretary Ashton said – Carter said that they are also looking for Arab countries to participate in the training and equipping and so on. But you talked about the urgency of the situation – we remember as far back as last spring when they were talking about --


QUESTION: -- liberating Mosul and so on.


QUESTION: But the longer you wait, it seems that the longer that ISIS can also establish roots in the ground.

MR TONER: Well, I mean, I would argue the opposite. I mean, with the systematic and steady approach that the Iraqi forces – again, with our assistance and with other members of the coalition’s assistance – have been making against ISIL, they’ve been losing ground. They’ve been losing territory. And we’re going to keep applying pressure. That’s something we’ve talked about. But you can’t let – I mean, there’s just an urgency overall. Certainly, cultural preservation is part of it, the preservation of historical sites is part of it. But it’s also, as I said, the constant threat that these innocent civilians under their rule or under their brutal dictatorship are suffering that also lends urgency to our mission.

Iraqi forces are still trying to clear the area of the Islamic State.

Victory was declared before it was earned.

Secondly, as photos of the area demonstrate, the real 'winning' fighter in that battle was . . . War Planes.  US war planes bombing Ramadi.

The city is in ruins.

It is so bad that Iraq's Shi'ite and Sunni leaders are saying no battle can result in the 'Ramadi option' again.

But a whorish press in the US has allowed the lies of Ramadi to stand so Barack can claim that he's building on 'success.'


QUESTION: A mirror image of that story around Mosul, overnight Amnesty International announced a report saying that the KRG Peshmerga – your allies in this fight against ISIS – have begun cleansing Sunni Arab villages that they’ve recaptured from ISIS, but now they’re driving out civilians and destroy – and there’s satellite imagery in the report showing destroyed buildings and large areas – maybe thousands of houses destroyed by your allies.

MR TONER: Yeah, no, we’re aware of the report, David, and obviously take it very seriously. We’re looking at its allegations and contents. And I can’t comment at this point on any of the particular claims except to say that as government forces liberate territory from ISIL throughout Iraq, there must be security for all civilians to prevent the actions of those who would take advantage of the conflict to commit crimes or engage in any way in vendettas.
Please.


QUESTION: A Pentagon spokesman said on the same incident this morning that any questions about whether this would affect the U.S.’s relationship with the government in Kurdistan, that’s a question for you guys. Could you anticipate that there will be questions – that there will be conversations with President Talabani about what KRG forces have been doing?

MR TONER: I mean, I can anticipate that – we have a relationship with the government of Kurdistan that we can talk about these issues, and these are ongoing concerns and issues that we’ve talked about not just with respect to Kurdish forces but throughout Iraq. And frankly, the new government in Iraq has, we believe, made an effort in – as these new territories are liberated from ISIL to bring back stability, reconstruction; to rebuild hospitals, schools, et cetera so that people can return and feel safe in returning to these liberated areas. That’s absolutely a key component of our strategy.

Of the new report, TELESUR reports:


Peshmerga forces in northern Iraq, trained and equipped by the United States, are allegedly razing Arab towns liberated from the Islamic State group. A human rights group is accusing the armed forces of the Kurdistan Regional Government (KRG) of carrying out a deliberate campaign to prevent the return of Arabs to towns in Iraq once occupied by the Islamic State group, a practice it says may amount to war crimes.

And yesterday's snapshot noted the War Crimes of the Shi'ite based government out of Baghdad as it went after Sunnis.


Iraqi civilians are under attack and the Islamic State is only one threat to them.

The kidnapping last week of three Americans in Baghdad underscores the central but volatile role of predominantly Shiite, pro-government militias in the ongoing crisis in Iraq.
U.S. and Iraqi officials confirmed to Reuters on Tuesday that the three American contractors who disappeared are being held by a militia, so far unnamed. The incident is the latest illustration of how militias often allied with Iran remain an unpredictable element in Iraq’s shifting landscape of power, posing a dilemma both for the government in Baghdad and for the U.S.-led coalition battling ISIS.

Sunday, Mohammed Tawfeeq (CNN) broke the news that 3 Americans were missing in Iraq. Monday,  CBS NEWS and AP report, "A group of Americans who went missing over the weekend in Iraq were kidnapped from their interpreter's home in Baghdad, according to an Iraqi government intelligence official."


Senator Marco Rubio is running for the Republican Party's presidential nomination.  NBC NEWS reports that Rubio has floated that Iran was behind the kidnapping and insists that Barack's responsible for motivating "people to grab Americans because, you know, if you grab a group of Americans you can get something from Barack Obama."


Meanwhile the Shi'ite attacks on the Sunnis continue.


Haider's been a failure as prime minister.


That becomes more and more evident.