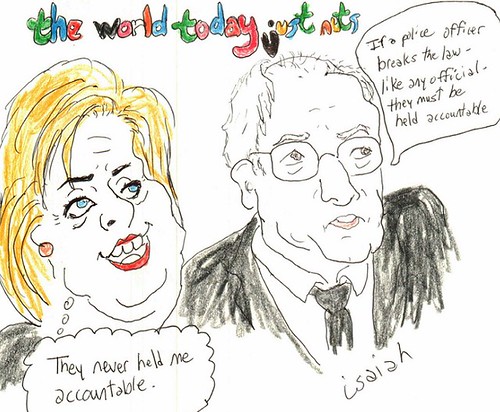 And Hillary Clinton and Bernie Sanders are in the news:

As her allies acknowledged that her forceful attacks on Bernie Sanders have backfired, Hillary Clinton on Thursday softened the edges on her criticism of her main primary opponent, arguing that his heart is in the right place even if his proposals are wrong.
Her new tone marked a contrast from last week, when her forceful dismissal of his universal health care system appeared to boomerang.

Clinton allies grimaced when Chelsea Clinton told a crowd in New Hampshire that the Vermont senator would “dismantle Obamacare." She was the wrong messenger, they said, delivering the wrong message.
The Clinton campaign said the former first daughter was merely responding to a question. But even Clinton’s own attacks on Sanders’ “Medicare for All” health care plan seemed to unsettle many Democrats who consider a single-payer system a cherished ideal.


Hillary Clinton really can come off like a know it all and that is why so many compared her to Reese Witherspoon's character in the film ELECTION.
The honchos of the Democratic Party should realize that the more people are exposed to Hillary Clinton, the less they like her.
Her mouth always does her in.

Thursday, January 21, 2016.  Chaos and violence continue, US bombing of Iraq continues, Haider al-Abadi finds his voice when his beloved Iran is accused, and much more.


Strikes in Iraq
Attack, fighter, and remotely piloted aircraft conducted 15 strikes in Iraq, coordinated with and in support of the Iraqi government:

-- Near Fallujah, a strike destroyed an ISIL mortar system.

-- Near Qayyarah, a strike struck an ISIL vehicle bomb factory.


More of the same from Barack Obama.  It's not solved anything.  It won't.

But it's all he can do: Bomb and bomb some more.


THE NATION magazine is a mindless whore for Barack but even they can see that.


﻿ In the wake of all this, Secretary of Defense Ashton Carter touted “the kind of progress that the Iraqi forces are exhibiting in Ramadi, building on that success to… continue the campaign with the important goal of retaking Mosul as soon as possible.” Even more recently, he said those forces were “proving themselves not only motivated but capable.” I encountered the same upbeat tone when I asked Colonel Steve Warren, a US military spokesman in Baghdad, about the Iraqi security forces. “The last year has been a process of constructing, rebuilding, and refitting the Iraqi army,” he explained. “While it takes time for training and equipping efforts to take effect, the increasing tactical confidence and competence of the ISF [Iraqi security forces] and their recent battlefield successes indicate that we are on track.”
“Progress.” “Successes.” “On track.” “Increasing tactical confidence and competence.” It all sounded very familiar to me.
By September 2012, after almost a decade at the task, the United States had allocated and spent nearly $25 billion on “training, equipping, and sustaining” the Iraqi security forces, according to a report by the Special Inspector General for Iraq Reconstruction. Along the way, a parade of generals, government officials, and Pentagon spokesmen had offered up an almost unending stream of good news about the new Iraqi Army. Near constant reports came in of “remarkable,” “big,” even “enormous” progress for a force that was said to be exuding increasing “confidence,” and whose performance was always improving. In the end, the United States claimed to have trained roughly 950,000 members of the “steady,” “solid,” Iraqi security forces.
And yet just two and a half years after the US withdrawal from Iraq, that same force collapsed in spectacular fashion in the face of assaults by Islamic State militants who, by CIA estimates, numbered no more than 31,000 in all. In June 2014, for example, 30,000 US-trained Iraqi troops abandoned their equipment and in some cases even their uniforms, fleeing as few as 800 Islamic State fighters, allowing IS to capture Mosul, the second largest city in the country.

Carter and Barack are selling 'success' the same way Bully Boy Bush and Donald Rumsfeld once did.


You have to create the myth of 'success' to sell a disaster.


The Iraq War is ongoing and it is a disaster.

To get support for it, even a War Hawk as beloved as Barack needs something more than a cheesy grin to sell it.

You need the lie that 'success' has arrived -- at last.

That the fabled turned corner has emerged.

And this lie is supposed to trick people into believing that an obviously unwinnable war has suddenly transformed into winnable.

There's no such thing as a recovering War Hawk.

At least recovering alcoholics grasp that insanity is doing the same thing over and over but expecting different results.

War Hawks repeatedly lie that you can do the same losing thing again (and again and again and . . .) but somehow get different results.


So Barack and other War Hawks -- along with enablers and co-dependents (largely in the press and in elected office) -- act as though a near 16 month bombing campaign has accomplished amazing things when it's really accomplished nothing to brag of.


Yes, some members of the Islamic State have been killed.

So have a lot of civilians.

And that and the persecution of Sunnis will continue to aid the Islamic State in recruiting new members -- and recruiting them at a faster pace than they can be killed.


If the US government had, under Barack's orders, spent the same 16 or so months trying to facilitate reconciliation in Iraq, seriously trying, things might be better.

As it stands now, the decisions made by the US government have only fostered the growth of the Islamic State.

There's a new development today in the kidnapping of three Americans in Iraq. In fact, there are two new developments.  Background: Sunday, Mohammed Tawfeeq (CNN) broke the news that 3 Americans were missing in Iraq. Monday,  CBS NEWS and AP reported, "A group of Americans who went missing over the weekend in Iraq were kidnapped from their interpreter's home in Baghdad, according to an Iraqi government intelligence official."


In October of 2014, Samuel Oakford (VICE NEWS) reported on the militias:


The group most familiar to Americans is likely the Baghdad-based Mahdi army of Shia cleric Muqtada al-Sadr. Officially disbanded in 2008, Sadr's forces are once again active under the name Saraya al-Salam, or the "Peace Brigade."
Other groups, like the Badr Brigades, trace their roots to the 1980s, when they were first backed by the government of Shia-dominated Iran. The Asa'ib Ahl al-Haq (League of the Righteous), an offshoot of the Mahdi Army, is considered among the most powerful of the Shia militias, and reportedly maintains ties to members of Iran's Revolutionary Guard.
A spokesperson for Asa'ib Ahl al-Haq told reporters in June the militia's troops "are fighting side by side with the government's forces on all fronts," and openly admitted that they wore military uniforms, calling it "logical."
"There is a lot of close collaboration, these Shia militias are [sometimes] operating as formal Iraqi forces, wearing uniforms and driving military vehicles," Sunjeev Bery, Advocacy Director for Middle East and North Africa at Amnesty International, told VICE News. "It's difficult to know how much of the Iraqi central government's limited victories against ISIS are the result of the Shia militias, but they are a core part of the central government's strategy. That's what's most disturbing."


QUESTION: Yes. Mark, I was wondering if you have any update on the three Americans missing in Baghdad.


QUESTION: And there are some conflicting reports that some says – like giving reference to U.S. officials, some Shia-backed militias are responsible for the kidnapping Americans.


MR TONER: Sure. And I’ve seen that, and I spoke a little bit about this yesterday. I mean, look, there’s a lot of information circulating out there about who or – might be behind their disappearance. We don’t have – I don’t have any further information that I can provide right now.


QUESTION: Considering Iran’s influence on the region, I was wondering if Secretary Kerry spoke to Mr. Zarif by any chance about this case.


MR TONER: He did, and I would refer you to – I think the transcript – he mentioned that he did speak to him and he did raise his concerns about these individuals with Foreign Minister Zarif, if I’m not mistaken. I think he did a roundtable earlier today. I don't know if the transcript’s come out yet.


QUESTION: The transcript is not out yet.


QUESTION: Just clarification on that. Prime Minister Abadi is still saying it’s not completely clear that they were actually kidnapped. Is that the U.S. position is well?


QUESTION: I mean, you said “disappearance.” You didn’t say “kidnapping.”


MR TONER: Yeah. I mean, this is an ongoing investigation, so I can’t give you a play-by-play and I’m not going to give you a play-by-play. We continue to cooperate and work with the Iraqi authorities. There are a number of possibilities as to what happened to these individuals. We’re obviously pursuing all of them diligently, but I don’t have anything and I can’t, frankly, share any information about what may have happened to them.


MR TONER: Well, he acknowledged one of these – that one of the possibilities is that they were kidnapped by an Iraqi – or Iranian-affiliated, and he said he had raised it with them.


QUESTION: Just that that is a possibility that he acknowledged.


QUESTION: Can you get that transcript out as soon as --


QUESTION: Mark, there’s been no demands made?


QUESTION: No demands were made?

The second development, noted above, is Haider al-Abadi speaking on the topic.

Iran gets accused of being behind the events and all the sudden Haider wants to speak.

To say maybe they weren't even kidnapped.

Since Sunday, this story has been big news around the world.

But only after Iran is accused does Haider elect to wade into the topic.


The ridiculous Haider al-Abadi met with the US Secretary of State today.


He also met with US Vice President Joe Biden. 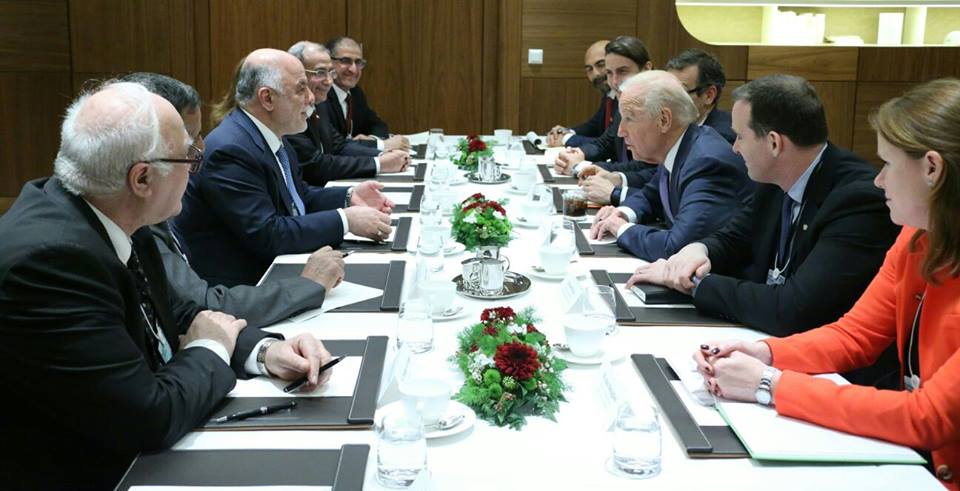 On the second meeting, the White House issued the following statement:

The Vice President met today in Davos with Iraqi Prime Minister Haidar al-Abadi. The Vice President congratulated Iraqi Security Forces on their liberation of Ramadi and pledged continued U.S. support in the counter-ISIL campaign. Both leaders discussed the urgency of stabilization efforts in Ramadi and the importance of mobilizing international support for those efforts. The Vice President encouraged continued dialogue between Iraq and Turkey to resolve concerns about Turkish troop deployments in northern Iraq and reiterated U.S. respect for Iraq's sovereignty and territorial integrity. The Vice President offered continued U.S. support to help Iraq strengthen its economy as the Iraqi government implements key reforms. Both leaders pointed to ongoing successes as a sign of the close strategic partnership between Iraq and the United States.