Pursuing the truth (and being attacked for it)

I hope you already saw this:

House Intelligence Committee Chairman Devin Nunes on Monday dug in after Democrats warned Republicans that "they will be held accountable" for damaging the FBI and Justice Department during their probe into possible government surveillance abuse.
“We’re not gonna be threatened by the Democrats. They are the ones that have all this blood on their hands,” Nunes told Fox News’ Laura Ingraham on “The Ingraham Angle.”
“They're the ones who completely destroyed the FBI and DOJ. How did they do that? They did that by digging up dirt, the Clinton campaign dug up dirt, put it into a dossier, fed into the FBI and the FBI used our counterintelligence capabilities against a political campaign,” he said.
The ones he is not going to be threatened by?  U.S. House Representative Adam Schiff.

I am getting really tired of prissy Adam Schiff.  He needs to worry far more about protecting the American people and far less about ways he can try to divert an ongoing investigation.
THE WASHINGTON EXAMINER covers the story as well and notes a list of who Mr. Nunes would like to see testify:

Included in the list, sent to House Oversight Committee Chairman Trey Gowdy, R-S.C., and House Judiciary Committee Chairman Bob Goodlatte, R-Va., is former Deputy Assistant Secretary of State Jonathan Winer, who in February admitted that the author of the infamous “Trump dossier," ex-British spy Christopher Steele, gave him intelligence reports claiming to show collusion between President Trump’s campaign and the Russians.
The dossier has become a flash point of controversy among Republicans. A memo released by House Intelligence Committee Republicans in February alleged the DOJ and FBI sought the authority to spy on Trump campaign aide Carter Page using the dossier, which had been funded in part by Hillary Clinton's campaign and the Democratic National Committee. While the GOP memo found that agents failed to disclose to a federal judge that Steele's research had Democratic benefactors, a Democratic rebuttal memo argued that the FBI did tell the judge that Steele was likely looking to "discredit" Trump.


Also on Nunes' list is Shailagh Murray, who served as an adviser to former President Barack Obama. Murray's husband, Neil King Jr., left the Wall Street Journal in late 2016 and migrated to Fusion GPS, the opposition research firm that commissioned the dossier.

Tuesday, July 3, 2018.  Chaos and violence continue as US troops remain on the ground in Iraq, the drought continues, and the never-ending 2018 election sees ballots recounted today.


Standing on his farm in southern Iraq, Amjad al-Kazaali gazed sorrowfully over fields where rice has been sown for centuries -- but which now lie bare for lack of water.
For the first time, this season Kazaali has not planted the treasured amber rice local to Diwaniyah province. 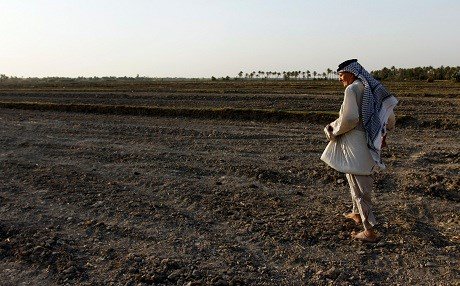 
What's going on?  The drought that's being caused by Iran and Turkey diverting water.  Patrick Cockburn (INDEPENDENT) notes, "Dams built upriver in Turkey, Syria and Iran since the 1970s have reduced the flow of water that reaches Iraq by as much as half and the situation is about to get worse."  Last month, Joshua Levkowitz (MIDDLE EAST INSTITUTE) explained last month:


Iraq is in a drought, and with warming temperatures, declining rainfall and ongoing dam construction, “the situation will only become more serious,” says Ali Alkarkhi, a member of Iraq’s Save the Tigris campaign. In the run-up to Iraq’s May 12 parliamentary elections, water policy has been noticeably omitted. It is problematic yet understandable that water has become a secondary concern in the wake of Iraq’s declared victory over ISIS in 2017. This is particularly urgent given that violent disputes related to water scarcity have flared up across Iraq and will only intensify, according to Alkarkhi. All this underscores the vital importance of water security in Iraq.
Hassan Janabi, Iraq’s Water Resources minister, said the amount of water flowing in Iraq’s rivers has fallen by at least 40 percent in recent decades, largely due to irregular rainfall and the construction of dams. The Waterkeeper Alliance’s Iraq branch conducted a threat assessment and found that dams were one of the major threats to the lower Zab River’s ecosystem. According to Musa, “While rivers have historically connected us, dams are dividing us.”

Of Iraq’s water resources, 70 percent come from rivers and marshes shared with its neighbors. Turkey, Syria and Iran control the flow of water into Iraq, and all three countries have plans to build dams that will further decrease water flow to Iraq, exacerbating the water crisis further.

The war has destroyed Iraq in countless ways.  And, yet, the war continues.


Yesterday afternoon the US Defense Dept issued the following:

There were no reported strikes conducted in Iraq on June 25.


And the US troops continue to battle on the ground.  On Monday evening's ALL THINGS CONSIDERED (NPR) this was noted:

MARY LOUISE KELLY, HOST:
We go now to Iraq, where there are still roughly 5,000 U.S. troops even though ISIS has been largely driven out. NPR's Jane Arraf traveled with the U.S. military for an exclusive look at one of the more remote American bases near the Syrian border.

JANE ARRAF, BYLINE: To get to the firebase, you fly by helicopter over Mosul, the city retaken from ISIS a year ago after nine months of fighting along Sinjar Mountain, where minority Yazidis fled to escape genocide in 2014. And then just a little more than a mile from the Syrian border, there's a collection of tents and armored vehicles in the desert. For the last month, that's been home to about 150 American soldiers and Marines working with Iraqi forces to fire artillery at ISIS in Syria.


SERGEANT JASON POWELL: This is the M777 Alpha 1. It shoots the 155 round as we have here. They weigh about a hundred pounds each. And sometimes we get up to 12-round fire missions. So with your gear on and hauling these rounds, these guys are fricking animals.

As the war continues, so does the long, drawn out process of post-election counting. 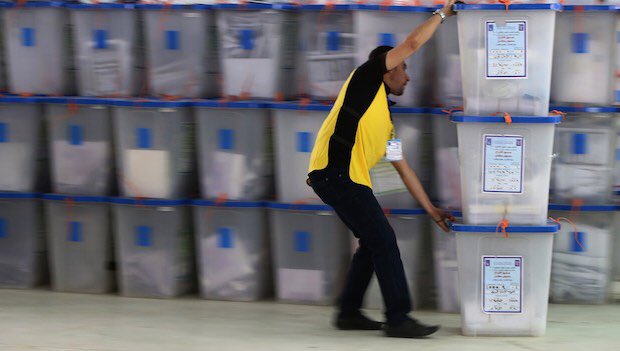 Sinan Salaheddin‏ @sinansm 2h2 hours ago
#Iraq’s state TV: Hand recount of vote from May's national #elections begins in Kirkuk province. It shows dozens of ballot boxes lined on the ground of a covered sports hall with employees counting the sheets. The recount will extend to six other provinces in the coming days.
0 replies1 retweet0 likes

Ahmad Mousa‏ @AhmadMousaQ 3h3 hours ago
#Iraq elections manual recount starts in #Kirkuk on Tuesday. The committee from Baghdad, supervising the recount, are not letting journalist in to cover the process except for the state TV. @AFP correspondents on site
1 reply3 retweets3 likes 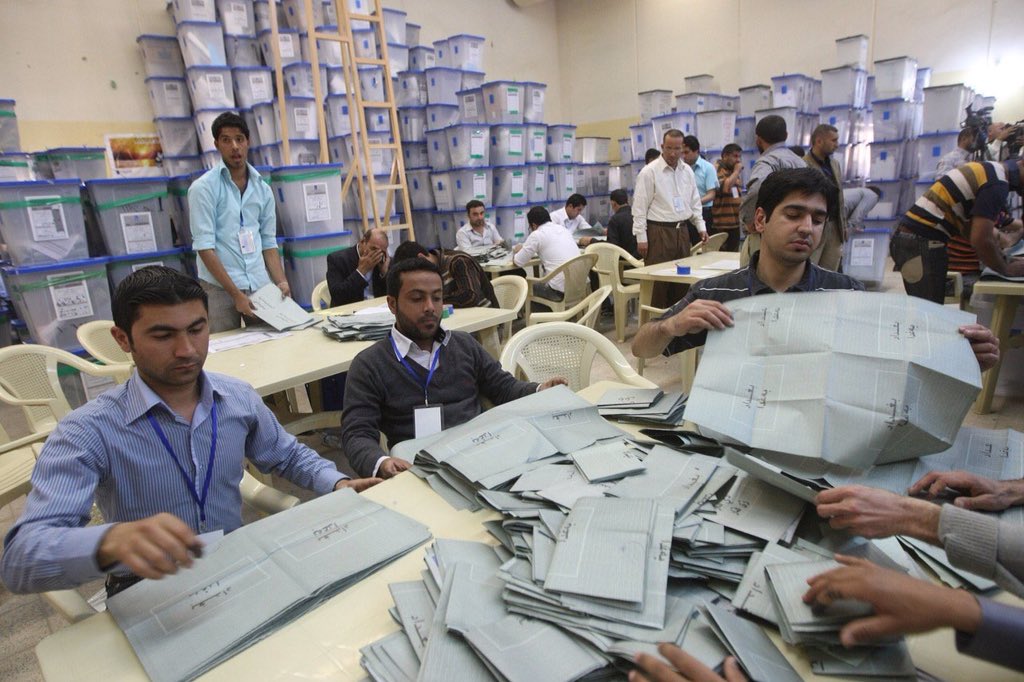 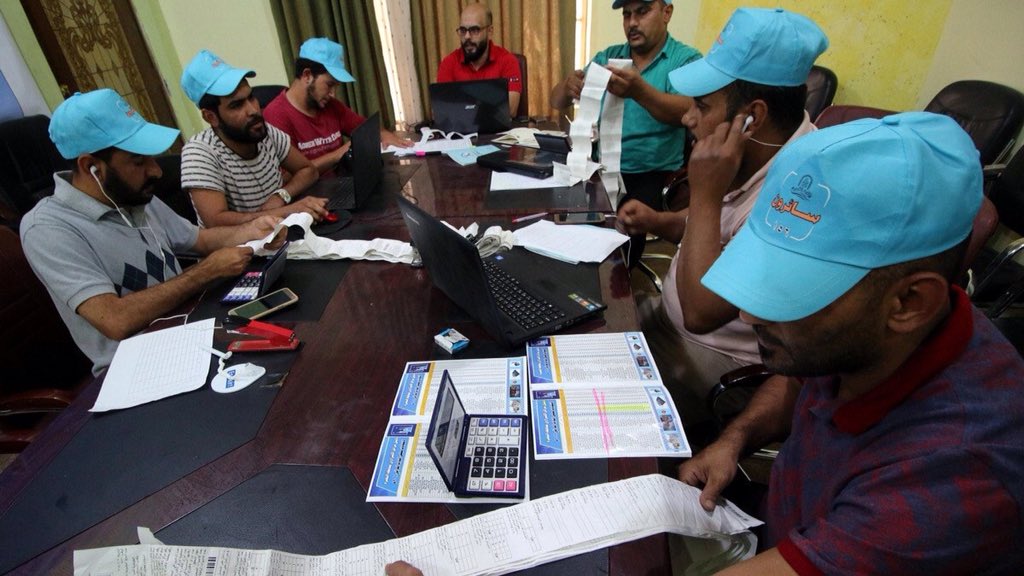 May 12th, Iraq held national elections.  Ahead of the elections, there had been big hopes -- these hopes included a large turnout.   Ali Jawad (ANADOLU AGENCY) noted, "A total of 24 million Iraqis are eligible to cast their ballots to elect members of parliament, who will in turn elect the Iraqi president and prime minister."  RUDAW added, "Around 7,000 candidates have registered to stand in the May 12 poll, with 329 parliamentary seats up for grabs."  AFP explained that the nearly 7,000 candidates includes 2014 women.  THE SIASAT DAILY added, of the nearly 7,000 candidates, "According to the electoral commission, only 20 percent of the candidates are newcomers." Ali Abdul-Hassan and Sinan Salaheddin (AP) reported, "Iraqi women account for 57 percent of Iraq’s population of over 37 million, according to the U.N. Development Program, and despite government efforts to address gender inequality, the situation for Iraqi women has declined steadily since 2003.  According to the UNDP, one in every 10 Iraqi households is headed by a widow. In recent years, Iraqi women suffered further economic, social and political marginalization due to decades of wars, conflict, violence and sanctions."   On the day of the election, the big news was how so few were turning out to vote.  NPR reported, "With more than 90 percent of the votes in, Iraq's election commission announced voter turnout of 44.5 percent. The figure is down sharply from 60 percent of eligible voters who cast their ballots in the last elections in 2014." AP pointed out the obvious, "No election since 2003 saw turnout below 60 percent."  AFP broke it down even more clearly "More than half of the nearly 24.5 million voters did not show up at the ballot box in the parliamentary election, the highest abstention rate since the first multiparty elections in 2005 [. . .]."


Shi'ite cleric and movement leader Moqtada al-Sadr came in first, the militias led by Hadi al-Ameri came in second, Hayder al-Abadi (current prime minister) came in third.  The three have no formed an alliance to form the next government.


Iraq’s Prime Minister and Leader of Al-Nasser Coalition (Victory Alliance), Haider Al-Abadi, has been trying to avoid making a coalition with his predecessor, Nouri Al-Maliki, Al-Araby Al-Jadeed reported on Monday. Working with the Sa’eroon Coalition leader Muqtada Al-Sadr, Al-Abadi has been exerting efforts to avoid such a deal. Al-Nasser and Sa’eroon are the largest coalitions in the new Iraqi parliament.
Meanwhile, another Coalition, Al-Fateh, formed mainly by Al-Hashd Al-Shaabi (the Popular Mobilisation Forces), has been trying to bring Al-Maliki closer to the largest groups. “Al-Fateh Coalition, headed by Hadi Al-Ameri, is trying to bring the ex-Prime Minister closer to the coalition of Sa’eroon, Al-Nasser and Al-Fateh,” explained one Sa’eroon official. He noted that such an effort “will bring the Shia home together again.”


The official, who refused to give his name, said that all three groups have the same stance towards Al-Maliki, but they have set conditions for him to join the coalition. One of these, he explained, is that he will not be given any of the sovereign ministries to run. This and other conditions are expected to be unacceptable to him.


Nouri fueled the rise of ISIS via his persecution of the Sunnis.  That's why then-president Barack Obama stopped speaking to him in late 2012 (going so far as to refuse to take Nouri's call of congratulations the day after the 2012 elections, Barack insisted the call be passed over to then-Vice President Joe Biden).  By June 2014, Barack knew Nouri had to go and by August he was gone.

Corrupt and inept, Nouri still has dreams of becoming prime minister again.  It's not working out for him.