I really do not know.

She is certainly as destructive as any pedophile.

She certainly preys on the disadvantaged.

She pretends to care but she does not.

She drains people for all she can get and then drops them.

If you missed it, the death toll among Iraqi protesters continues to mount.  Yet Amy Goodman and her sorry ass DEMOCRACY NEVER has ignored it except for one measly headline.

I have also noticed that she refuses to book anyone from WSWS so it is clear she is a Democratic Socialist.  That is the fakery group that tries to pied piper leftists into the Democratic Party.  That certainly explains meek and embarrassing Amy Goodman when Barack Obama was president.

She made a lot of money off Iraq, you may remember.

But, though the war goes on, she cannot find the energy to cover it.

She is the pedophile of newscasters.

PACIFICA needs to dump her and stop paying her millions each year for content that they do not even own.

She is a little hustler which is why she published in Larry Flynt's HUSTLER.  Grasp that, in the age of METOO#, Amy Goodman published in that rag repeatedly until she was called out too loudly for too long.


Let's start with stupidity because it needs to be challenged and called out.


Obama untangled us from Iraq, Afghanistan Wars, and ISIS. And the Iran Deal would have kept Iran stable for 15 years. Instead we are headed to greater instability in Iran.
1 reply20 retweets22 likes


Barack Obama did not untangle the US from Iraq.  Or from ISIS but we're focused on Iraq.


Before we recount the realities, let's go to a Tweet which notes continued US military action in both Iraq and Afghanistan and maybe even stupid Randy can grasp reality this go round since the Tweet is from the US military.

U.S. Air Force‏Verified account @usairforce 10h10 hours ago
From ops in Afghanistan to Iraq and Syria, take a look at @USAFCENT's #airpower highlights for the past month: af.mil/News/Article-D… 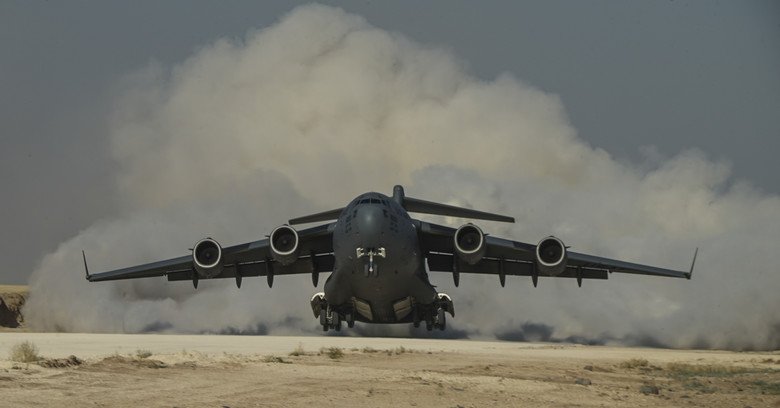 Get it, stupid Randy?


US troops remain in Iraq.  Randy is a stupid lying idiot.

No, not that "We want out of Iraq!" cry.  He said he'd pull troops out and then send them back in.  He said that to Michael Gordon and Jeff Zeleny of THE NEW YORK TIMES.  But the paper was really busy whoring for Barack so they failed to include that pertinent detail in the published article.

When the transcript went up online, we covered reality.  See the November 2, 2007 "Iraq snapshot," and, at THIRD, "NYT: 'Barack Obama Will Keep Troops In Iraq'."  If others didn't, too bad.  Randy's an idiot.

All US troops did not leave Iraq at the end of 2011.  Some left.  It was a "drawdown" not a "withdrawal" -- DoD understood the difference even if idiots like Randy didn't.

Not only were some US troops left in Iraq but a large number were left in Kuwait.  Senator Kay Hagan grasped that.  We covered that hearing [see the November 11, 2011 snapshot for one example and the hearing was also reported on in the November 15, 2011 snapshot, and "At Trina's site last night, Ava covered an exchange with "Scott Brown questions Panetta and Dempsey (Ava)," at Rebecca's site, Wally covered economic concerns expressed over the use of contractors "The costs (Wally)" and Kat offered a look at various claims about the administration's negotiating goals and what Iraqi leaders supposedly sought with "Who wanted what?""].    Maybe if idiots like Randy had paid attention, Hagan would still be in the Senate instead of losing to a Republican?

In 2012, Barack ran for re-election as president on the false claim that he had ended the Iraq War and pulled all US troops out of Iraq.  In October the so-called presidential debates -- actually the Democratic and Republican debates -- began.


If Barack's sitting before them and he's flat out lying to the American people, it's their job to ask.  They didn't do their job.  Nor did social menace Candy Crowley who was apparently dreaming of an all-you-can-eat buffet when Barack was babbling away before her about how he wouldn't allow more "troops in Iraq that would tie us down."  But that's exactly what he's currently negotiating.

In 2012, while few paid attention, Barack began sending US troops back into Iraq (just as he promised he'd do in that NEW YORK TIMES interview in 2007).  By June of 2014, he was sending more troops in openly.  US troops remain in Iraq.  They are there to prop up the rulers the US government imposes and to maintain oil production.  They are not there for freedom or democracy.


Which is why Nouri al-Maliki could and did attack and kill protesters and reporters and the US looked the other way.  Barack only gave a damn a few years later when Nouri's action had led to the rise of ISIS and ISIS had seized control of Mosul.  The secret prisons and jails, the torture carried out by Nouri?  Never mattered to the US government.


It is telling that the most recent press release from the US Department of Defense regarding Iraq—on July 17, the same day Iraqi security forces were beating protesters with rubber hoses—concerned the clearing of ISIS militants in northern Iraq.

Meanwhile, when asked about on the Iraq protests during a State Department Press Briefing, Spokesperson Heather Nauert called the protests an “internal” issue and affirmed the right of the Iraqi government to maintain the security of public property. She also deferred questions about tackling corruption. The United States could benefit from a broader strategy for stabilization and peace building in Iraq that addresses the socioeconomic conditions underlying violent conflict and unrest outside of the counter-ISIS fight.

People took to the streets in many southern provinces protesting about the lack of basic services the country has been suffering from for over a decade. In addition, despite an all- party agreement over the results of the last parliamentary elections, the choice of a Prime Minister is not going to be easy. And that is not all: Mesopotamia’s problems continue with the bras-de-fer between Iran and the US, which is intensifying. The actual Prime Minister Haidar Abadi is no longer Iran’s favourite candidate but to the US and its regional Middle Eastern partners he remains so. The big question remains: in the event of successfully backing “their” candidate, who would be the winner, Iran or the USA? Both are determined not to lose and are using all available means to promote their own candidate-agenda.
Interim Prime Minister Haidar Abadi is managing for now to absorb the anger of the population, who took to the streets. They were demonstrating about the lack of jobs, the rationing of fresh water in the southern city of Basra, the regular power cuts in the very hot weather in southern and central Iraq, and they were revolting against the overwhelming corruption Iraq has suffered from since the US occupation in 2003.

People are struggling for basic needs.  Demand these needs and risk death.

Duaa Malik‏ @Duaa_IQ 3h3 hours ago
These are the faces of the men who lost their lives in the anti-corruption protests in Iraq. May their souls rest in peace, knowing that they inspired millions to continue demanding their rights. #IraqProtests #مظاهرات_وطن

Those are the faces of 8 who have been killed.  They had lives, they had friends and family.  Standing up for basic needs cost them their lives.  In what world is that fair?


And the number killed has continued to increase. 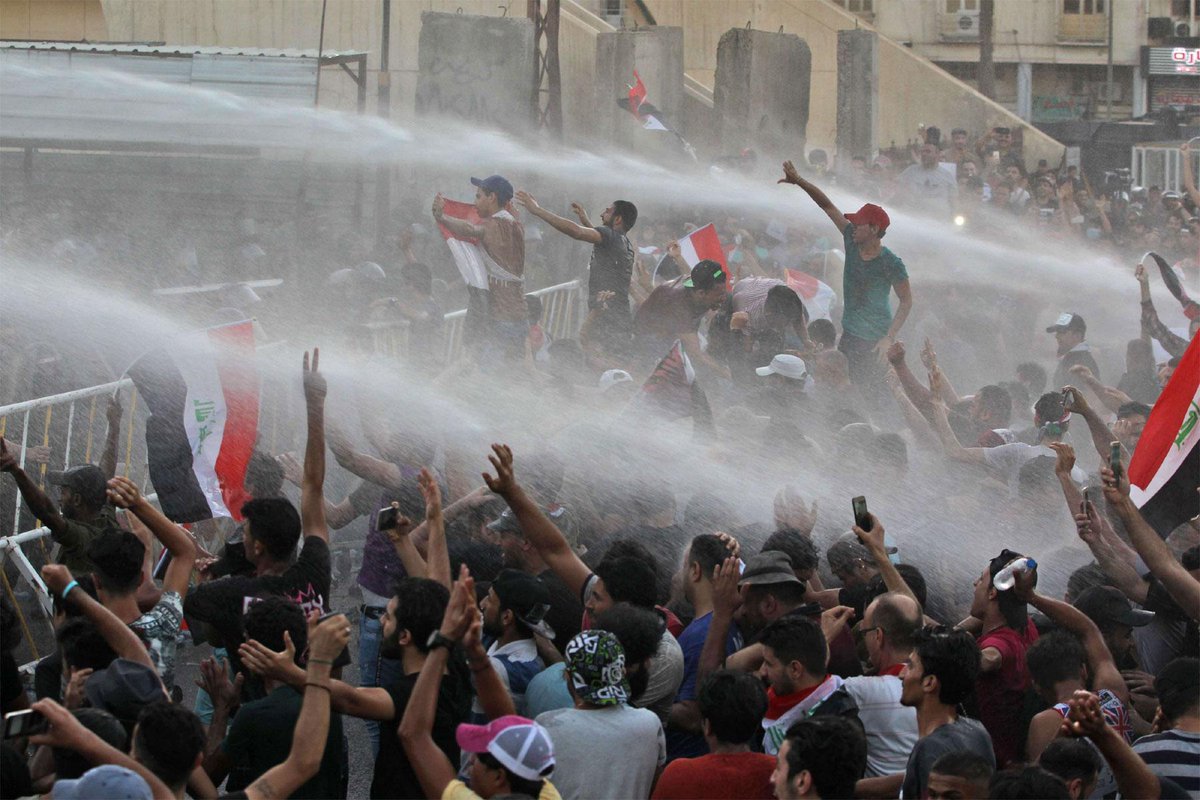 Protests against corruption, unemployment, and a lack of basic services in Iraq’s southern cities have left at least 14 people dead since they began two weeks ago, according to a member of Iraq’s human rights commission.

Security forces have used tear gas, water cannons, and live fire to break up protests that have raged across southern Iraq for over two and a half weeks.

Suffering under high unemployment and lack of water and electricity, angry protesters say they have had enough of government corruption and politicians’ failure to serve the people.

Fadel al-Gharrawi of Iraq’s rights commission, who was appointed by the Iraqi parliament, said there had been fatalities in Basra, Samawah, the Shiite shrine cities of Najaf and Karbala, and in the provinces of Diwaniyah and Babylon, according to Anadolu news agency.

Stupid Randy hasn't Tweeted once about the Iraqi protests.  The Iraqis don't matter to people like Randy, they never have.  Self-absorbed, sick individuals who thrive on lies and deceptions and look the other way while people suffer because of the direct actions of the US government.


A volunteer lawyer was killed to defend protesters in #Basra


Witnesses identified and provided photos and videos of the Interior Ministry’s anti-riot police, federal police, Special Weapons and Tactics (SWAT) forces, Strike Force Brigade (Liwa al-Quwa al-Thariba), and oil facilities police, all identifiable by their uniforms, policing the protests. They said they observed these security forces beating numerous protesters with wooden, plastic, and metal sticks and pipes to disperse the crowds. In two incidents, they said, security forces beat protesters in custody and a journalist conducting an interview.
These security forces along with members of the Badr Organization, part of Iraq’s Popular Mobilization Forces, fired on protesters at six of the eight protests investigated, witnesses said. Human Rights Watch documented the deaths of at least two protesters from gunfire. The authorities confirmed both these deaths and a third.
Witnesses said that the 47 injured protesters had been beaten or hit with rocks and gunfire. One protester said he saw a protester hit by a Humvee armored vehicle that was chasing him. Two men are still in comas from serious head injuries caused by the security forces. With the exception of the protests at al-Qurna oil field, protesters and journalists said they did not hear any warning before security forces opened fire or used teargas and water cannons to disperse the crowds.