What happened?  Who did the bombing?  Apparently Israel.


Israel declined to comment on Tuesday on a weekend air strike against an Iraqi paramilitary base in eastern Syria after its US ally implicated it in the attack.
The Sunday evening strike against the Al-Hari base on the Syrian side of the border with Iraq came less than 24 hours after Prime Minster Benjamin Netanyahu said Israel would strike Iran's "proxies" anywhere in Syria.


Deadly strike on Syria-Iraq border: What we know u.afp.com/oA7Z 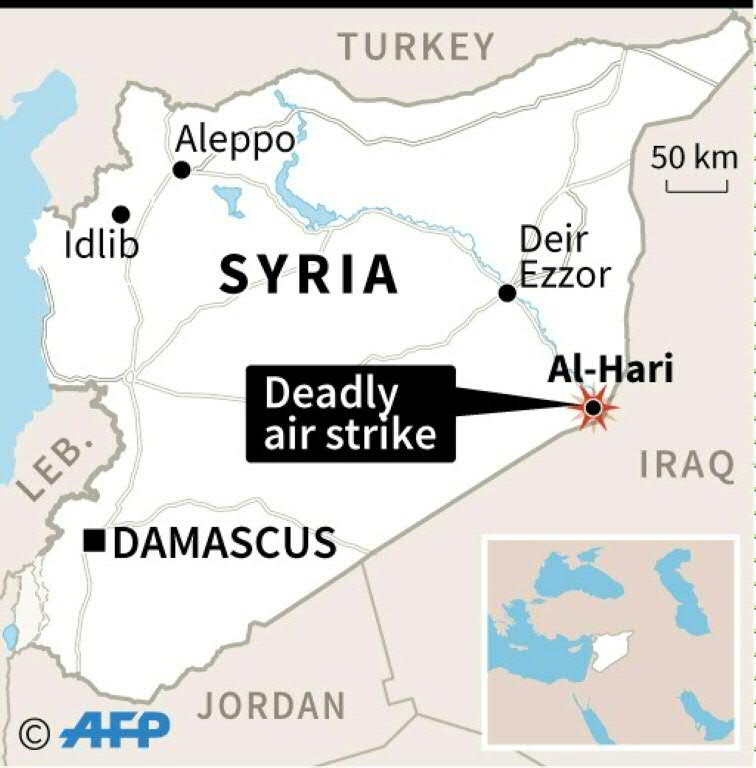 
Here, via AP, is something that's known: "Iraq condemned on Tuesday the targeting of pro-Syria paramilitary troops in eastern Syria after an airstrike killed mostly Iraqi Shiite forces deployed to fight the Islamic State group."  REUTERS attempts to find its way out of the maze:


The U.S. military denied it was responsible, while CNN reported Monday, citing a U.S. official, that in fact Israel was behind the attack.


PRESS TV offers this description of those targeted, "Hashd al-Sha’abi is an Iraqi state-sponsored umbrella organization composed of some 40 groups, which are mainly Shia Muslims. The force reportedly numbers more than 100,000 fighters. Iraqi authorities say there are between 25,000 and 30,000 Sunni tribal fighters within its ranks in addition to Kurdish Izadi and Christian units."  Of course, another way to describe them would be the people who came in second in Iraq's May 12th elections.

It's interesting how quickly the US government rolled over on Israel -- from just saying "It wasn't us" to naming Israel.

The strike was a huge mistake.  Israel has confirmed every spoken fear the region's had for some time.  At a time when Iraq is still sorting out the elections?  Concern over Israeli influence is now going to again be high.  Look for the Arab states to also renew a focus on the fact that Israel is a nuclear power and to argue that this leaves them at risk.

In March of this year, Amos Harel and Aluf Benn (HAARETZ) reported on how, despite a decade of denial, the Israeli government had bombed Syria in 2007:


It is especially surprising that this is also the story of a secret that was maintained for a long time here in Israel despite the considerable personal interests of a number of those who are now involved in its publication. Only now, more than a decade later, has the military censor allowed the Israeli media to report the history of this affair – and even that, still with restrictions.
The Haaretz investigation of the bombing of the nuclear reactor is based on conversations with 25 of the individuals who were involved in the operation and in the events connected to it, in Israel and in the United States. One of the key figures who led to the decision to bomb the Syrian reactor, the head of the Mossad at the time, Meir Dagan, died in March last year.

Read that second paragraph closely and what it's saying is this was a joint-operation between the governments of Israel and the US -- carried out with US cooperation.

It's worth noting that Sunday's attack was also most likely not a surprise to the US government and probably also took place with US cooperation.

Considering the very long and very convoluted shared history between the governments of the US and Israel, the Iraqi military should probably not have rushed in insisting that the US wasn't involved.


For fifteen years and counting the Iraq War has created massive displacement and internal and external refugees.  This is mirrored in other areas of war.

Zaid Hamid‏Verified account @ZaidZamanHamid 2h2 hours ago
"one person every two seconds is being dislocated from their homes"..... And the staggering fact is that almost all are Muslims.....Iraq, Syria, Yemen, Palestine, Kashmir, Burma, Afghanistan....now Jordan is on the verge... Let the horror of this sink deep into your soul.....


For Iraq, the refugee crisis has been ongoing and had already, by 2008, created the largest displacement crisis in the Middle East since 1949.

There's no real improvement for Iraq, each year of the war just increases the number.

UN Refugee Agency‏Verified account @Refugees 22h22 hours ago
"The only answer is to end the conflicts that are forcing people to flee their homes - and for all governments to meet their responsibilities." - UNHCR Special Envoy Angelina Jolie, at Domiz refugee camp in Iraq.
0 replies72 retweets120 likes


If that's the only answer, then why has it not been carried out?  Fifteen years of war (just the latest wave) imposed upon them by the US government, you have to wonder where Iraqis gather the strength to carry on but they do.

UN Refugee Agency‏Verified account @Refugees 9h9 hours ago
"These people have lost everything... they have nothing, but they're free." Our Special Envoy Angelina Jolie describes the devastation, suffering, and glimpses of hope she saw on a visit to West Mosul, Iraq. trib.al/TyDaUUU
9,301 views
0:11 / 0:50
0:39
9,301 views
7 replies129 retweets215 likes

I'm not friends with Laura Bush and don't know her but she's under criticism for recent remarks and, quite frankly, should be.  Don't show up at this late date as a champion of children when you've never said one word about all the children your own husband killed.

John Schindler‏Verified account @20committee 18h18 hours ago
Our 2003 invasion of Iraq led to the deaths of at least tens of thousands of Iraqi children and making refugees of hundreds of thousands more. Count was lost years ago, there have been so many. Not that anybody cares -- or really ever did. cc @laurawbush
57 replies176 retweets702 likes


"uwu don't criticize laura bush for the actions of her husband!!!" Sorry but if my husband started the Iraq war I would divorce his ass so fast lmao
1 reply1 retweet6 likes

Laura Bush husband got us into a war in Iraq that killed thousands because of a lie. So please excuse me if I don’t care what she thinks
2 replies3 retweets7 likes

RaisedontheRadio‏ @RaisedonAMRadio 11h11 hours ago
Replying to @loveSueP
I’m sure that War the her husband started in Iraq that killed 2.5 million people is breaking her heart too. Poor Laura Bush!
0 replies0 retweets0 likes


Sara Salem Retweeted Dan Balz
This is how ridiculous American amnesia is. Laura Bush! Who justified the wars against Afghanistan and Iraq again? But yes, let’s talk about how immorality is apparently something the US has only engaged in the last few years...
Sara Salem added,
Dan BalzVerified account @danbalz
Powerful words from Laura Bush: Separating children from their parents at the border is “cruel...immoral.” Compares images with those of “shameful” Japanese internment camps during WW2 washingtonpost.com/opinions/laura…
0 replies4 retweets11 likes

(Who Is) Bad Guy Joe‏ @ltvsquad 23h23 hours ago
Laura Bush should not be today's hero of the American left. She sat by while her hubs went on repeated vacations before 9/11 and let us start completely unjustified war in Iraq. Signed sincerely, someone who ran downtown that god awful morning.
0 replies0 retweets7 likes

Mark Di Carlo - Lawyer and another guy‏ @markadicarlo 23h23 hours ago
Laura Bush expresses outrage about children separated from parents. Where was her outrage for the children of Afghanistan and Iraq when her husband got the U.S. in those two wars for fraudulent pretenses? How many children were killed, left homeless, and maimed? Please.
0 replies2 retweets6 likes