About the F.B.I. bias

Senator Chuck Grassley is not impressed with the attempts to distort reality and grasps that there was bias and the I.G. report documents this:

It is time to end the Russia distraction and focus on reality.

Monday, June 18, 2018.  The Iraq War continues, Hayder al-Abadi thinks he's still relevant and, in the US, Brianna Wu thinks she's going to save us. 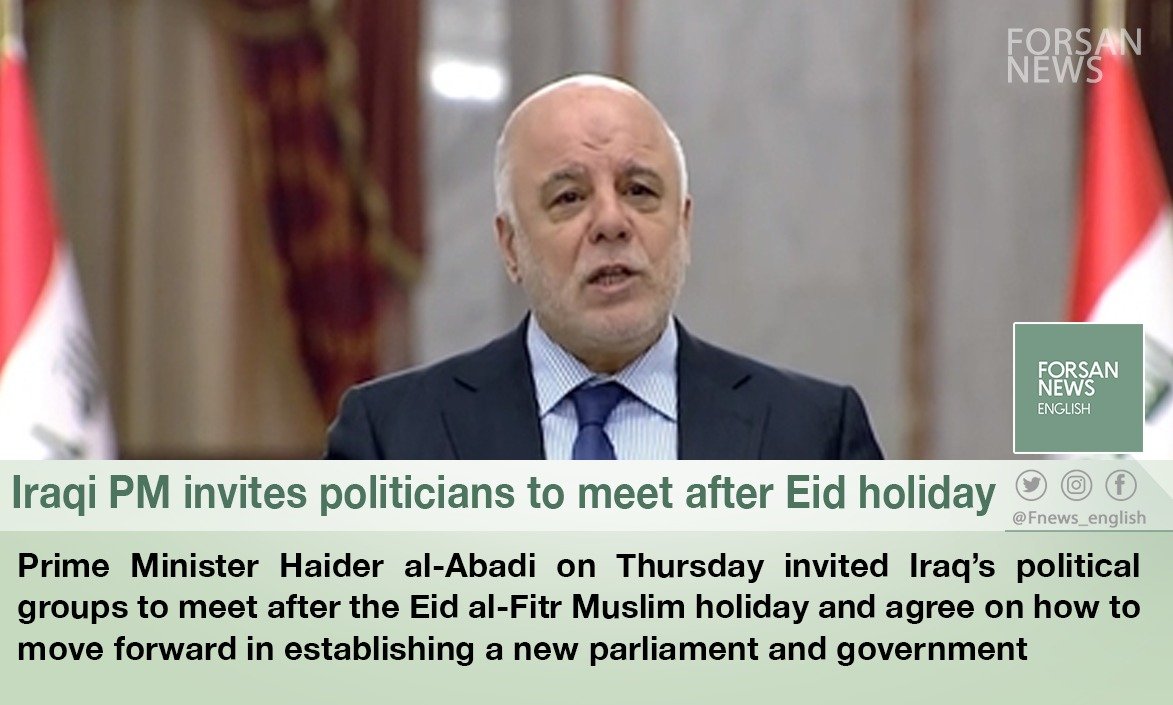 
After Eid?  Meet me down by the railway station, I've been waiting . . . Or as Stevie Nicks said in another song:

Sometimes
The most beautiful things
The most innocent things
And many of those dreams
Pass us by
Keep passing us by
-- "Angel," written by Stevie Nicks, first appears on Fleetwood Mac's TUSK


Hayder, you are the ghost in the fog and the country is passing you by.

He's been desperate for some time and that desperation was evident in his campaign. As Kirk Sowell (Carnegie Endowment for International Peace) noted in April ahead of the May 12th elections:


Hampered by the earlier mishandling of his coalition launch in January, he appeared to sell out his nationalist credentials to guarantee his reelection thorough a deal with Iran-backed factions of the Fatah Alliance, led by the Badr Organization, only to see this deal fall through. The impression of inauthenticity was reinforced in February when one of his closest allies in the Dawa Party, MP Ali al-Allaq, revealed in an interview that Abadi and Maliki had agreed in writing to merge their coalitions after the election despite each regularly blaming the other for Iraq’s current woes. Allaq’s comments set off a media firestorm about the apparent “secret agreement,” and as a result, the party reportedly hauled him before a disciplinary committee.
This disclosure reinforced the impression that Abadi’s nationalist credentials were for sale, as with the near-alliance with the Iran-backed Fatah. And it meant that Dawa was violating electoral rules, since the electoral commission’s ruling in January that a party could not run on more than one alliance meant that Dawa had to publicly claim that its leaders were running as independents on separate lists.
Adding to Abadi’s campaign troubles, there was increased media coverage of an apparent terrorist resurgence following a spate of lethal attacks by IS against security personnel in parts of Kirkuk governorate where militant groups have long flourished. These operations undermined Abadi’s security narrative and war leadership. Populist Shia cleric Muqtada al-Sadr even went as far to say that, “given the government’s clear failure in this regard, we are ready to save Kirkuk from the hand of terrorism,” referring to the possible remobilization of Sadr’s own militia.

Abadi might as well be singing the song of Stevie's lazy and less talented ex, "I'm just second hand news."  That's all Hayder is at this point.

More than a year ago, H.E. Sayid Muqtada Al-Sadr in a proposal addressed to the Iraqi Parliament called for a nationalist, proficient, non-partisan mechanism to choose IHEC; the very same leaders who accuse this commission today rejected that proposal.
0 replies23 retweets24 likes

Shi'ite cleric and movement leader Moqtada al-Sadr won the elections.  And when the US government attempted to (again) circumvent the electoral process, Moqtada out-gamed them by teaming up with Hadi al-Ameri.

[. . .] 2018 split the spoils across Sunni, Shiite, and Kurdish lines. In such an atmosphere, Sadrists, who received roughly 30 to 40 seats in previous elections, were poised to make a much stronger showing. As the election results came in, it became clear his list would win a plurality of the 329 seats in the Council of Representatives. That’s when the angst, bordering on panic, began in Washington, London, and in the minds of hundreds of thousands of Iraq War veterans who only knew the Sadr who’d tried to kill them during past deployments in Iraq.
After all, Sadr doesn’t like the United States. He never has and most likely never will. Sadr and his militias fought numerous battles against U.S. forces whom he viewed as occupiers. Even the government of Iraq launched Operation Charge of the Knights against Sadr and his militias in Basra in 2008 with massive help from coalition forces, an operation that prompted Sadr to flee to Iran. Following the 2008 cease-fire, Sadr shifted the Mahdi Army’s focus away from military operations to the provision of social services, establishing a nonmilitary wing called the Mumahidoon and reassigning most of the Mahdi Army’s members to it. Attacks against the Iraqi military and citizens were halted, although a small number of Mahdi militia members were assigned to the Promised Day Brigade and continued their attacks on U.S. forces until the U.S. withdrawal in December 2011.
The Sadr who returned to Iraq in 2011 from his exile in Iran was different. He disbanded the Mahdi Army, ordered his militias not to attack U.S. forces, and, in 2014, instructed them instead to defend Iraq against the Islamic State. The rise of the Islamic State coupled with the fall of Mosul resulted in an odd coalition: Iraqi Shiite militias, Iranian-backed forces, Iraqi counterterrorism forces, and U.S.-led coalition forces all fought against the Islamic State in both Iraq and Syria. Sadr’s forces, unlike other Shiite militias, cooperated with Iraqi government forces in that fight. More important, after Prime Minister Haider al-Abadi announced in December 2017 that the Islamic State had been defeated in Iraq, Sadr ordered his militias to disband and continued to follow the instructions of the Iraqi government.


In America?  Maybe things will be better?  Brianna Wu does not reassure but the reaction to her idiotic comment does.

You cannot say often enough, Trump directly happened because Bush taught the Republican party that truth didn’t ultimately matter. Media never asked Americans to reflect on the Bush years. Never thought about rushing to war in Iraq, or Katrina, or really anything from 2000-2008.
17 replies148 retweets495 likes

Now do the Clinton years. Now that Hillary is irrelevant many Ds and media cronies are finally coming out and condemning his graft and womanizing. This whitewashing has normalized this behavior with both parties. That is why we have Trump you partisan hack.
2 replies0 retweets0 likes

No, we have Trump b/c "Amurrica" is full of racists and xenophobes who are so afraid that if anyone the slightest bit "different" manages to have a decent life that it will throw the world off its axis. Fear and wilful ignorance. THAT'S why we have Trump.
1 reply0 retweets2 likes

Yes. EVERYONE who voted for him was racist and xenophobic. Thanks for simplifying things. Didn’t realize all those union voters who supported the Obama presidency (twice) were secretly racists.
3 replies0 retweets0 likes

Trump openly campaigned on racism, hate and xenophobia, @johnfrendo. Not every Trump voter was actively racist themselves. But every single Trump voter - without exception - decided that racism and bigotry isn't a dealbreaker.
1 reply0 retweets1 like

Serenity Now‏ @johnfrendo
Replying to @Tynam @thegratefulgran @Spacekatgal
You can continue to rest on that misguided theory and lose to Trump in 2020, or you can support policies that appeal to rust belt working class voters. Russian collusion and these other things that froth up voters like you, do nothing to get a Trump voter to defect it only 1/
4:36 AM - 18 Jun 2018
2 replies0 retweets0 likes
Replying to @johnfrendo @Tynam and

Sorry, Brianna, go back to gaming if you think it's the media's job to ask people to reflect.  That's not their role and it's never been defiend as it's role.  Also true, the media did a lot more (after the war started -- the war that's still going on) than the Democratic Party did.

They promised they would end the Iraq War, ran on that in 2006, give us one house and . . .  And they didn't.  They did what craven politicians always do when they find an issue, refuse to resolve it so they can instead use in numerous election cycles.

It's not going to work, Brianna.

You're an idiot, an out of touch idiot.

I knew Donald Trump was going to win because I wasn't hidden away in a gated community.  I'm out there.  I'm college campuses and I'm school campuses, I'm speaking to women's groups and labor groups and veterans.  And I know the mood that people like you missed completely.

The Iraq War continues.  In 2018, thus far, 11  American troops have been killed in the Iraq War.

That would be the Iraq War the Dems promised to end in 2006 if they had one house of Congress and We The People gave them both houses of Congress.  But they didn't end it.  Then in 2008, Barack said he'd end it if we elected him president.  (Samantha Power left his campaign because in March of 2008, she told the BBC that it wasn't really a promise, this promise to end the Iraq War.  We covered it.  THE WASHINGTON POST covered it.  That was about it.  John Nichols flat out lied to avoid covering it -- yet again inventing some b.s. story that was face free.)

Barack left the White House in January of 2017, after two terms as president and US troops were still in Iraq and the Iraq War was still going on.

People's disgust over the Iraq War remains high.  Especially those who would vote.

Yet every four years the Democrats place another I-voted-for-the-Iraq-War on the ticket -- apparently never learning from their failures.

And people like Brianna Wu thinks Americans are stupid enough not to notice the failure of the Democrats on the Iraq War?

Not only did so many of them vote for it, but they refused to end it and they refused to do serious hearings on it after they were in power.  Brianna thinks the nation should have reflected?  That's not the media's role, that's what Congressional hearings are for.

If Brianna doesn't grasp that, why is she running for Congress?


Let's close with this on the Hobby Lobby of journalists   Rukmini Callimachi of THE NEW YORK TIMES.

Hey @nytimes if you could return those like 16,000 documents you stole from Iraq in 2016, that would be awesome. Stop saying you're going to make them accessible when that's not your g**damn job, your job is to return archival documents to the country you stole them from
0 replies0 retweets0 likes