Ms Lynch is also disagreeing with James Comey regarding whether or not the decision to not call it a criminal investigation made Mr. Comey worried.  CNN reports:

Former Attorney General Loretta Lynch says former FBI Director James Comey didn't appear concerned by the decision to call an inquiry into Hillary Clinton's private email server a "matter" rather than an "investigation."
Lynch's comments in an interview with NBC News released Monday are in contrast to congressional testimony Comey gave last June, when he said her handling of the probe gave him a "queasy feeling."
Lynch said that her meeting with Comey about the probe "was a meeting like any other we had where we talked about the issues. We had a full and open discussion about it."
"Concerns were not raised," she added.


So who is telling the truth there?  They are both sketchy people at best.

Monday, April 9, 2018.  Elections approach but not a lot of optimism about them in Iraq.

May 12th, Iraq is scheduled to hold elections.  In a sign that the campaigning has already begun, violence has already started.  AFP reports:

A suicide attack targeting a political party headquarters in western Iraq has killed four people and injured seven others, including a candidate in polls set for May, officials said Sunday. On Saturday evening "two suicide bombers disguised as soldiers entered the Al-Hal Party headquarters", one of most prominent parties in the Sunni-majority province of Al-Anbar, a local security official told AFP on the condition of anonymity.


A lot of countries are interested in the elections -- or, in the case of the US and Iran, 'interested' (the governments of both countries have always felt they could dictate the outcome to Iraqis).


The al-Fateh electoral coalition, composed of #Iran backed Hashd al-Shaabi militia factions running for the Iraqi parliamentary elections in May, held a meeting on Sunday in #Baghdad with the participation of an Iranian military and diplomatic delegation
#Iraq 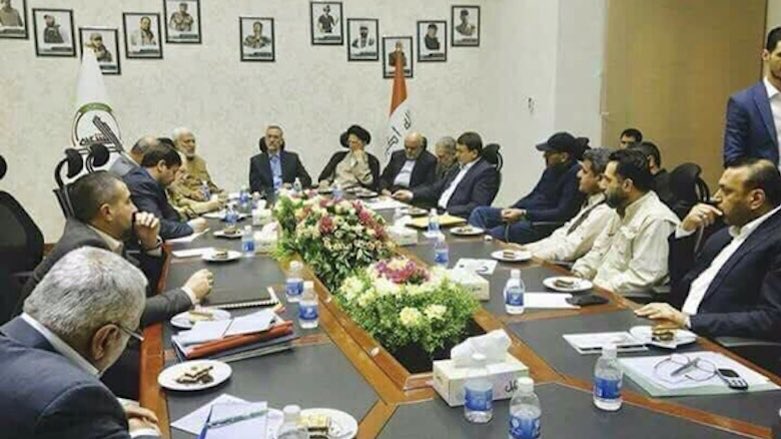 And you will find
while in the wind
something that you lost
The dream was never over, no
The dream was only lost
"Straight Back," written by Stevie Nicks, first appears on Fleetwood Mac's MIRAGE

And, yet again, it appears to many that the election will be lost again.  Majed al-Samarai (ARAB WEEKLY) explains:

In the race for the 2018-22 parliament, we still find the same old figures who refuse to withdraw from the playing field. All the big names, such as Nuri al-Maliki, Haider al-Abadi, Iyad Allawi, Ammar al-Hakim, Osama al-Nujaifi and Muqtada al-Sadr (even though the latter has a special status) are present.


Of course, some new faces, always from the Shia house, have been injected into the tired and boring game. These new elements usually give a hint about the identity of the most influential playmaker in Iraq, namely Iran.


The game was rigged right from the beginning, following a well-timed plan and with the consent of a former partner in the crime, namely the Americans.


Hakim has the wisdom to call on young Iraqi Shias to step forward and bear the responsibility of the coming phase but seems to have overlooked that those young people are ravaged by unemployment and drugs.


In a surprising move, Allawi chose to innovate by striking alliances with traditional Sunni leaderships. His discourse, however, has not changed. He is still pushing to move to reforming the political system.


Finally, Abadi is still trying to cash in on the victory over the Islamic State but his promises of fighting corruption produced no tangible results.


Hayder al-Abadi staked his future on the premature claim that he vanquished ISIS in Iraq.  That, of course, hasn't proven to be the case.  XINHUA reports, "At least two security forces members were killed and seven others injured Monday in a clash with four suicide bombers from the extremist Islamic State (IS) group in the western Iraqi province of Anbar, a local security source said."  ISIS was supposed to be Hayder's big claim to fame.


Instead, his biggest claim to infamy is just how ineffective he can be.  MEM reported last month, "Iraqi Prime Minister Haidar Al-Abadi yesterday ordered an immediate investigation into allegations that fake jobs in the public sector were being offered to citizens by political parties in order to win votes in the country’s upcoming general elections."  ALSUMARIA reported last week that the Badr Organization's Hadi al-Amiri stated they would eliminate corruption.  He stated that they would create needed jobs and punish those who had stolen Iraq's wealth.  Hadi is a militia thug and he's also one of the corrupt -- most infamously, he ordered a plane  to remain on the runway and wait for his spoiled son Mahdi to make the flight but the plane left Lebanon without Mahdi on board so al-Amiri, then-Minister of Transportation in Iraq, refused to allow the plane to land.  It caused quite an uproar -- as CNN noted in real time.

THE BAGHDAD POST reports, "Candidates in the upcoming elections' behaviors will make the elections process the worst in Iraq's history, MP Kazim al-Sayadi said on Saturday.  In a press statement, Sayadi said the candidates are trying to bribe voters or intimidate them and that will produce a weak and corrupt parliament."

Now that we are ahead of parliamentary elections, reasonable men must realize that those who caused all this damage to the country and its people cannot be counted on and granted confidence again.
These representatives have had their chance and much more, and they do not even feel guilty for not improving the situation and they have not admitted to their mistakes. This signifies stubbornness and arrogance. Saddam Hussein himself was stubborn and arrogant thus leading to Iraq’s destruction. The damage of the past 15 years due to political Islam groups is a result of Saddam’s destruction and it further completes it.


The  #_15th anniversary of the occupation of Iraq:

The concerns of the Iraqis have focused on the services enjoyed by our ancestors in the last century, such as drinking water, electricity and hospitals.
Press reports


On the occasion of the #_15th anniversary of the occupation of Iraq
The Security is still the primary concern as for the citizen.

The people who have been in charge of Iraq post-2003 invasion have not been Iraqis.  They've been exiles, cowards who fled and only returned after the US invasion.

April 7 at 4:49pm ·
Fa'iq Al-Sheikh Ali :The overthrow of the regime of Saddam Hussein is a great effort achieved by America and not by those who are ruling Iraq now because they did not offer anything to people.
.
https://www.facebook.com/iraqispringmc/videos/1206193152845659/

The government has so little legitimacy among the people because it is not of the people.  It is a government of exiles who chose to leave Iraq and live outside it for decades.  They were installed as puppets by the US after the invasion.

The reason US troops remain on Iraqi soil is to prop up this government.

It's a point few appear willing to concede.  (They grasp it, even if they pretend otherwise.)


Marc Thiessen spent the lead up to the Iraq War writing speeches for Bully Boy Bush and Donald Rumsfeld.  That alone should leave him sidelined today.  Instead, THE WASHINGTON POST has made him a syndicated columnist.  Does he use that platform to atone for his actions?  Nope.  Does he try to learn from his mistakes?  No.

He just calls for more war.  In his latest piece of garbage, he's saying that President Donald Trump would be making a mistake if he pulled US troops from Syria.  He says this is the mistake Barack Obama made while president with regards to Iraq.  Here's Thiessen:


What should Trump be doing in Syria? He should maintain a U.S. presence to secure our military’s gains, protect our Kurdish allies, keep the Islamic State down and prevent al-Qaeda from capitalizing on the Islamic State’s demise. He should prevent Iran from entrenching itself in Syria, expanding its military presence and threatening Israel. And in the longer run, he should work to separate the Sunni population from al-Qaeda by cultivating Sunni partners in Syria who are allied with the United States against the Salafi-jihadist cause, as well as the growing Iranian-Russian-Assad-Hezbollah alliance.


The temptation to declare victory in Syria and withdraw is understandable. But before he does so, Trump should ask himself:


What would Obama do? Then, he should do the opposite.

What happened was not surprising.

Unless the American people are willing to allow their sons and daughters, brothers and sisters, mothers and fathers to spend forever on the ground in Iraq, Americans have to come home at some point.

The hope of the John McCain crowd (he was okay with US troops in Iraq for 100 years -- he said while campaigning for president) is that the longer US troops are in Iraq, the more the government sinks in and the will of the people cannot triumph.

ISIS rose in Iraq not because US forces pulled out of Iraq.  It arose because the US government refused to honor democracy.  Barack gave Nouri al-Maliki a second term that the Iraqi people didn't want him to have.  In that second term, Nouri really nursed his grudges and screwed the country over.

The Islamic State might have taken Baghdad in 2014, it might not have.  There's no indication it was going to.  But what if it had?

The Iraqi people would either fight it or they wouldn't.

That's for them to determine.  It's their country.

The United States is not leasing Iraq to the Iraqis, it's their country.

And their will is what should determine the future.

When the US finally leaves Iraq, things will be different.  But staying isn't saving anyone and is only preventing the will of the people.  That's what happened with Vietnam (which is still recovering).  It's what happens with any occupied country.

Here, we advised Barack Obama to pull out immediately upon becoming president.  Why?  We stated he was voted into office in order to do that.  By doing it immediately, when the collapse came (and we knew it would), he could say, "That's on Iraq.  The American people spoke in the 2008 election."

But he just knew so much better than anyone.  He just had to dabble with Iraq.  Move a few pieces around.  And pretty soon, he owned Iraq.  It's as much his failure as it is Bully Boy Bush's failure.  The smart thing is to get out of Iraq and Syria and let their people determine their future.