After causing an international incident, someone's surprised they're not welcomed?

Rania Khalek‏Verified account @RaniaKhalek 9h9 hours ago
Rania Khalek Retweeted Shane Bauer
Tell that to the pro-regime outlets CNN, BBC, ABC, Channel 4 and all the other western journalists who’ve been visiting Syria lately...
Rania Khalek added,
Shane BauerVerified account @shane_bauer
I applied for a visa to report in Syria and I was just rejected. The American journalists allowed in are the ones the regime can trust to parrot Assad and Russia’s propaganda. https://twitter.com/embassyofrussia/status/986198173533261825 …
Show this thread
18 replies156 retweets416 likes


I would assume Shane Bauer would be turned down because he is suspected of being a C.I.A. agent.  That has been the case since his 'innocent' wandering landed him in prison in Iran.

He was part of an international incident.  Does he really think anyone has forgotten that?

Iran accused him of being a spy.

Why would Syria want to let him into the country?

Wednesday, April 18, 2018.  Ignore facts and reality and you too can embrace violence.

Last Friday night, US President Donald Trump took to the airwaves to announce that the US, the United Kingdom and France were bombing Syria.  The claim put forward as fact was that Syrian ruler Basher al-Assad had attacked his own people with chemical weapons -- an attack that made no sense unless it was, in fact, carried out by the so-called 'rebels.'  As Ava and I noted in "TV: Neither humanity nor honesty factor into corporate news," the corporate media refused to question the claims put forward.

What they -- and some faux left people -- did do was say it was like Bully Boy Bush.

An illegal war?  Good for them!

Not so fast.  That's not what they did.

Trump Tweeted something with "mission accomplished" in it and they began comparing it to Bully Boy Bush under the banner "Mission Accomplished."

To them, that was criticism.

To anyone with half a brain, their 'critique' was revealing.  Those 'critiquing' were revealing their own true dreams and hopes: A long, long war.

Donald's speech suggested this could be a one-off and that didn't please them.  They wanted a long struggle -- as they made clear -- all of them but especially NBC's Chuck Todd and CBS' Margaret Brennan.

War -war -war.  They are damaged souls who can only find happiness when others are suffering.

And now the claims for bombing are already falling apart.  Will Morrow (WSWS) reports:


On Monday, the US and British intelligence agencies released a joint report charging Moscow with unspecified “cyber warfare” against the West. The American media was filled with hysterical warnings that Russia may have hacked “millions” of personal devices as well as critical infrastructure.
The tenor of the media coverage was epitomized by the New York Times, which labelled the intelligence agencies’ report a “computer-age version of a Cold War air raid drill, but asking citizens to upgrade their password rather than duck and cover.”
The coordinated campaign comes amid the unravelling of the official pretext for Friday night’s illegal US-British-French bombing of Russia’s ally Syria—the claim that the Assad government carried out a chemical weapons attack in eastern Ghouta on April 7.
On Sunday, the Independent published an on-the-spot report by well-known veteran journalist Robert Fisk, an expert on Middle East policy, who visited Douma, the town in Ghouta where a gas attack supposedly occurred.
Fisk spoke with Dr. Assim Rahaibani, who works at the medical clinic where the widely publicized videos were filmed showing children being hosed down with water, ostensibly to relieve poison gas inhalation. He quotes Rahaibani as follows:
“I was with my family in the basement of my home three hundred metres from here on the night, but all the doctors know what happened. There was a lot of [government] shelling and aircraft were always over Douma at night—but on this night, there was wind and huge dust clouds began to come into the basements and cellars where people lived.
“People began to arrive here suffering from hypoxia, oxygen loss. Then someone at the door, a ‘White Helmet,’ shouted ‘Gas!,’ and a panic began. People started throwing water over each other. Yes, the video was filmed here, it is genuine, but what you see are people suffering from hypoxia, not gas poisoning.”
This account is in line with statements by Russian authorities, who have charged that the White Helmets, the anti-Assad “rebel” organization funded by Britain, staged the gas attack under orders from UK intelligence to provide its Western sponsors with a pretext for intervention. Fisk notes that by the time he arrived in Douma, the White Helmets had already left to join fighters of the Islamic fundamentalist group Jaysh-al Islam, who fled Douma for Idlib under an agreement brokered with Russia.
Fisk’s report is a devastating exposure of the lies of the governments of France, Britain and the US, which have provided no evidence to substantiate their charges against the Assad regime. The imperialist governments’ narrative was immediately disseminated by a corrupt media that functions shamelessly as a propaganda arm of the state.
As the World Socialist Web Site insisted from the outset, the incident was a CIA-organized provocation to provide a pretext for imperialist intervention, continuing the seven-year-long US regime-change operation against Russia’s ally Assad, during which time Washington has armed and funded right-wing Islamist proxies.
Fisk’s report is at the same time a damning indictment of the corporate media, along with various pseudo-left organizations, such as the International Socialist Organization, which regurgitated all of the governments’ lying pretexts and made no effort to investigate them. The media has responded to Fisk’s report by burying it. In the 24 hours since its publication, neither the Washington Postnor the New York Times, which in 2005 called Fisk “probably the most famous foreign correspondent in Britain,” has reported on Fisk’s on-the-spot story.
The US government responds to each exposure of its lies by concocting new ones. The chemical weapons charge followed directly after the collapse of the unsubstantiated British and US claims that Russia carried out the attempted assassination on British soil of its former agent Sergei Skripal and his daughter Yulia, using a nerve agent. Both Yulia and Sergei are now on their way to a full recovery despite having supposedly been poisoned with the most fatal military-grade agent in existence.

The air strikes on Syria at the weekend were patently illegal according to international law. That would have been the case even had there been a chemical weapons attack in Douma, in part because it would have been necessary for independent inspectors to determine first whether the Syrian government, and not the jihadists there, was responsible.
The air strikes would have been illegal too, even if it could have been shown that a chemical weapons attack had taken place and that Assad personally ordered it. That is because air strikes would have first required authorization from the UN Security Council. That is why international law exists: to regulate affairs between states, to prevent militarism of the “might is right” variety that nearly destroyed Europe 80 years ago, and to avoid unnecessary state confrontations that in a nuclear age could have dire repercussions.
Had Assad been shown to be responsible, Russia would have come under enormous international pressure to authorize action of some kind against Syria – pressure it would have been extremely hard for it to resist.
But had it resisted that pressure, we would have had to live with its veto at the Security Council. And again, for very good reason. Israel, the US and the UK have used depleted uranium munitions in the Middle East, and Israel and the US white phosphorous. But who among us would think it reasonable for Russia or China to unilaterally carry out punishment air strikes on Maryland (US), Porton Down (UK) or Nes Ziona (Israel), and justify the move on the grounds that the US and UK could veto any moves against themselves or their allies at the Security Council? Who would want to champion belligerent attacks on these sovereign states as “humanitarian intervention”?
But all of this is irrelevant because whatever incontrovertible information the US, UK and France claimed to have that Syria carried out a chemical weapons attack last week is clearly no more reliable than their claims about an Iraqi WMD program back in 2002.


People died because of these lies.

This morning, Sam Tawseef posted a video that was supposed to be depicting 'justice' in Iraq -- a woman who had been raped was stoned to death by a crowd of men.  It was a crowd, women may have been present, but I saw men and I only saw it once because when I went to reload the clip -- a little over two minutes long -- it had already been removed (even though I was only the third view of it).

I don't understand the removal.

It was disturbing.  It was also supposed to be real.  It happened.  Why was it taken down?

The same mob mentality and cruelty in that crowd has been present in the US press.  That woman was every country the US government has bombed and attacked this century alone.  The mob lusting for blood was the US press.  No one stepped forward to say, "Stop!"  They just went along with it and the woman was stoned to death.

“Why should we hear about body bags and death? I mean, it's not relevant. So why should I waste my beautiful mind on something like that.” Barbara Bush on the Iraq War
11 replies125 retweets184 likes

Apparently, YOUTUBE is now the late Barbara Bush.  Our 'beautiful minds' will not be touched by reality.  Anything that might cause discomfort -- no matter how true -- will be removed.

A woman was stoned to death.  It was there for all to see.  If it was false, leave it up, someone will step forward with knowledge to say, "This is a clip from ____ and not Iraq" or whatever.  But this was a clip of a group killing a woman.  I don't know why we erase reality.  It's something that adults should have seen.  It's not pretty and that's why we need to see it and we need to know that it happens.  It was a shocking video -- but not because of blood (there really wasn't any, she was covered in cloth, niqab, etc) -- but because you saw a group gathered to kill and no one stopped them.  All present went along with the stoning.

Was it barbaric?  Yes, it was.  And so is dropping bombs on children which, for the record, the US government does pretty much every day in Iraq and Syria.  But we're far enough removed that our 'beautiful minds' don't have to be touched by reality.

This removal has allowed us to look the other way and refuse to call out what Bully Boy Bush, Barack Obama and now Donald Trump have done -- in our names, with our tax dollars.

Grasp the YOUTUBE and/or US government policy: Killings can take place we just don't want you to be able to see the dead.

'Justice' in Iraq?  It remains the same dirty joke it's been ever since the 2003 invasion.  AFP reports:

Iraqi courts have sentenced to death a total of more than 300 people, including dozens of foreigners, for belonging to the Islamic State group, judicial sources said on Wednesday.
The suspects are being tried by two courts, one near the former jihadist stronghold of Mosul in northern Iraq and another in Baghdad which is dealing notably with foreigners and women. 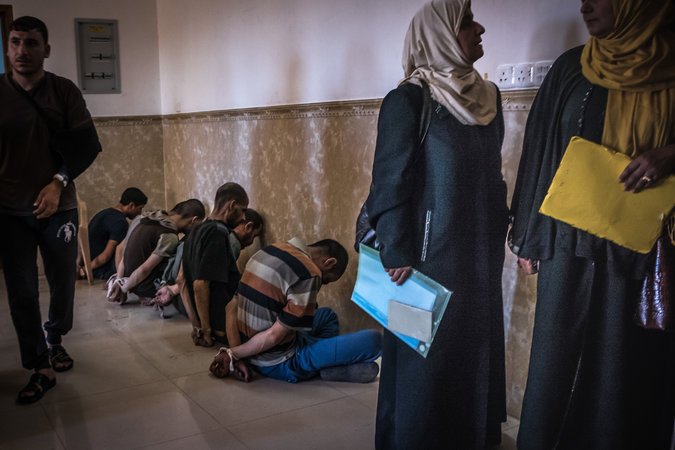 
There is no justice in Iraq.  There is vengeance but no justice.


May 12th, elections are supposed to be held in Iraq.  Some find the campaign of current prime minister Hayder al-Abadi to be familiar.