Praise and hiss for Brian Klaas

Brian Klaas‏Verified account @brianklaas
Brian Klaas Retweeted Ivanka Trump
Kelly is CoS & a 4-star general who served in Iraq/Afghanistan. It's not alongside. He's your boss & you're only there because of nepotism
Brian Klaas added, 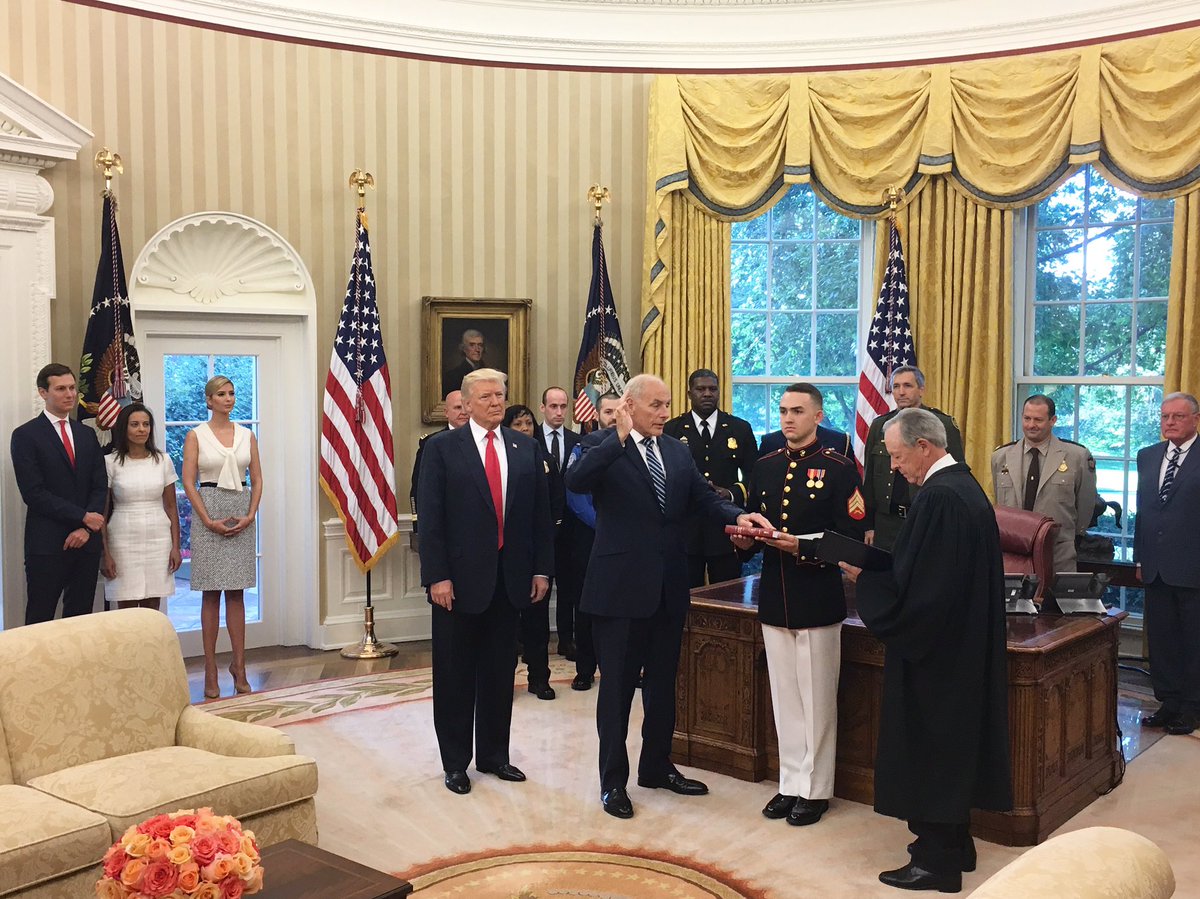 Ivanka TrumpVerified account @IvankaTrump
Looking forward to serving alongside John Kelly as we work for the American people. General Kelly is a true American hero.
3:41 AM - 1 Aug 2017
64 replies720 retweets1,884 likes

First praise, Mr. Klaas looks much better with his beard.

So good work with the beard.

But hiss, Mister, for not grasping who is Ivanka Trump's boss.

My fellow American citizens are.

We are the boss.

She is not working for any general and you are a damn fool, Mr. Klaas, for suggesting that she is.

Keith OlbermannVerified account @KeithOlbermann
Hey, @JulianAssange, just get it over with and ask the Russians for asylum twitter.com/stealthygeek/s…
245 replies2,212 retweets3,686 likes


I'm confused about the above.

Not about Keith per se.

He was trash and his verbal attacks on women well known before the faux left embraced him during the Bully Boy Bush years.

We never embraced him here or cited him as anyone to listen to.

But what confuses me about the above is that GQ has brought Keith back.

In a way it makes sense.

Professional bachelor Keith is their audience.

For decades, closeted gay men would buy GQ and pretend like it was for something other than the men inside.  Or, as GQ grew ever more desperate, on the cover?  What was the point, GQ, of your infamous Tim Tebow armpit close up?  The cover led to a few more issues sold but only a few.  Maybe if they had made it scratch and sniff . . .

But it's 2017 and the publishing industry still remains in ruins and, more to the point, the Barry Keep It In The Closet Dillers are a thing of the past.

Are there really enough closeted gay men around today to keep GQ afloat?

Keith, for those who don't know, didn't speak out against the Iraq War in the lead up to the war.

If he had, MSNBC would never have hired him.

Remember, they got rid of Phil Donahue because Donahue was not perceived as sufficiently pro-war.

In the world of Made A Difference, Julian stands several feet over tiny Keith.  WIKILEAKS has made a difference.

Well he's had a lot of showy fits.  He's sort of the Neely O'Hara of the chat and chew set -- the Neely to Midge Dector's Helen Lawson.


He had all those years of prime time on a show that was supposed to be about Iraq -- it was about Iraq when Lester Holt hosted it -- and he accomplished nothing.  He didn't lead on burnpits, he didn't lead on war resistance, what did he do?

Oh, that's right, epic rants about Bully Boy Bush.  He did one major put down after another to show how much more intelligent he was than Bully Boy Bush.  Apparently, finding someone dumber than himself was such a rare discovery that he couldn't shut up about it.


Our 'great' 'lefty' and he did nothing.

He still does nothing.

The fighting is far from over in Mosul, the last ISIS stronghold in Iraq nyti.ms/2tZoSzC 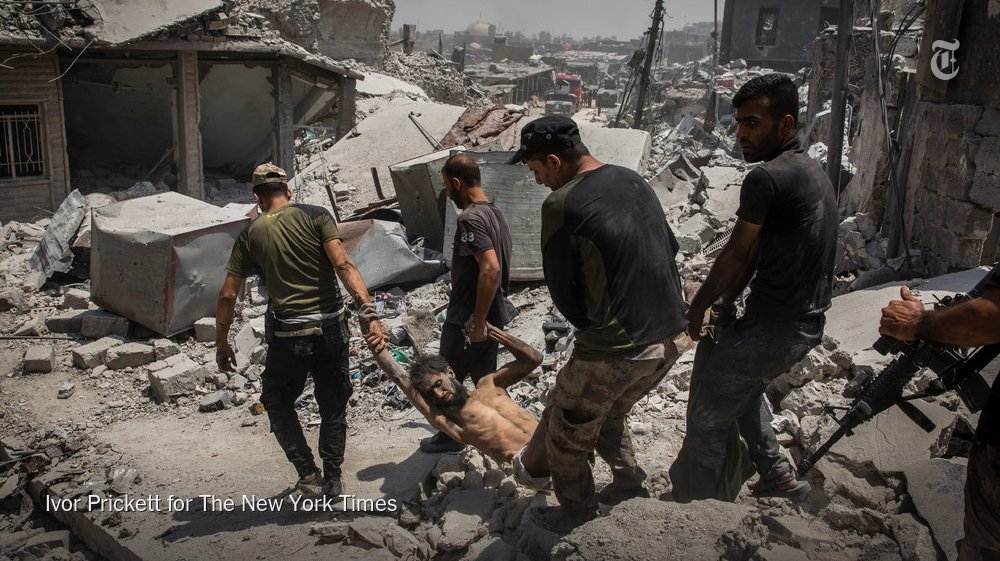 Yes, observers of Iraq are aware of this.

The question is, why did THE NEW YORK TIMES report it as over weeks ago and now come out with this?

It could have made a difference a few weeks back.


UPI has a piece by Wa'el Alzayat which opens:


After the defeat of the Islamic State in Mosul and likely collapse in Raqqa, the looming question in both countries is what will happen in areas liberated by U.S.-backed forces.
This question is critical for the United States, given the leading role it assumed when it formed the 60-plus country Counter-ISIS Coalition following the fall of Mosul in 2014. Since entering office, U.S. Presi­dent Donald Trump has pursued a strikingly similar approach to his predecessor's by narrowly focusing on dislodging IS while minimizing the U.S. military commitment.

As the so-called caliphate comes to an end, Trump's policy choices will affect the fate of liberated areas and perhaps the entire region. Just as the decision to disband the Iraqi Army and other missteps following the invasion of Iraq haunted post-war efforts, so will the decisions on how to govern and stabilize key Sunni areas in Iraq and Syria.


The world is full of Michael Walzers sadly.

We destroyed it, so we have to stay to fix it?  That b.s. was rejected here with "SHOULD THIS MARRIAGE BE SAVED?" -- thirteen years later, we're having to address it again?


The US cannot save Iraq.

Yes, it managed to destroy Iraq.

But it's efforts since haven't been about saving.

You don't -- as Barack Obama did -- give Nouri a second term after the voters reject him and then pretend you're helping Iraq.


You may be helping yourself but don't pretend you're helping Iraq.

(Barack's move helped so well it resulted in the rise of the Islamic State in Iraq.)

I don’t think that unless a greater effort is made by the government to win popular support that the war can be won out there. In the final analysis, it is their war. They are the ones who have to win it or lose it. We can help them, we can give them equipment, we can send our men out there as advisors, but they have to win it, the people of Vietnam, against the communists.

Then-President John F. Kennedy speaking of Vietnam in September of 1963.

Apply it to Iraq.

Grasp the Michael Walzers would have the US stay forever.

If you promote Kurds' Misinformation Campaign against Iraq, u r their friend. If u keep quiet, you are not their enemy. otherwise, u r evil.
0 replies1 retweet1 like

That man is still with Brookings why?

Check the archives -- we've called him out, we've warned against him.

But Brookings and others have stayed with him.

That is not the Tweet of someone a think tank needs to have on their staff.

The Iraq war has made Tony Blair a rich man . He has made a killing . 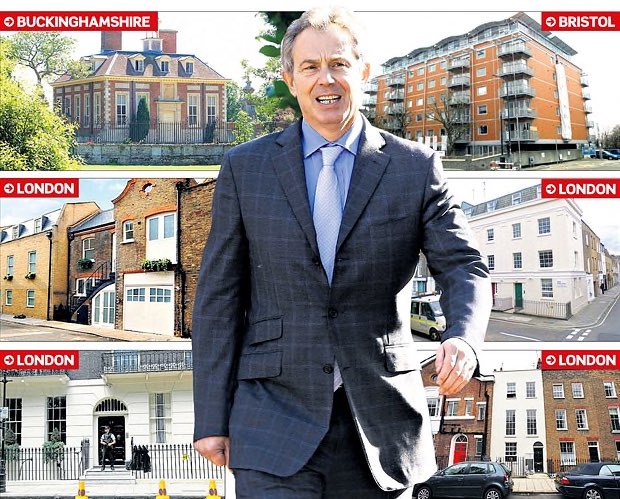 "You could make a killing," Aimee Mann sang -- and War Criminal Tony Blair certainly did.


ADDED: I'm trying to include the WSWS links daily:

Today the WSWS published "Google's chief search engineer legitimizes new censorship algorithm." It analyzes the April 25 blog post from Ben Gomes, Google’s VP for engineering, who rolled out the new censorship program. Please read the article and share it widely on social media.The other articles published on the WSWS so far on Google's new search methods are:

I do agree WSWS is under attack.