James Clapper will always be a liar 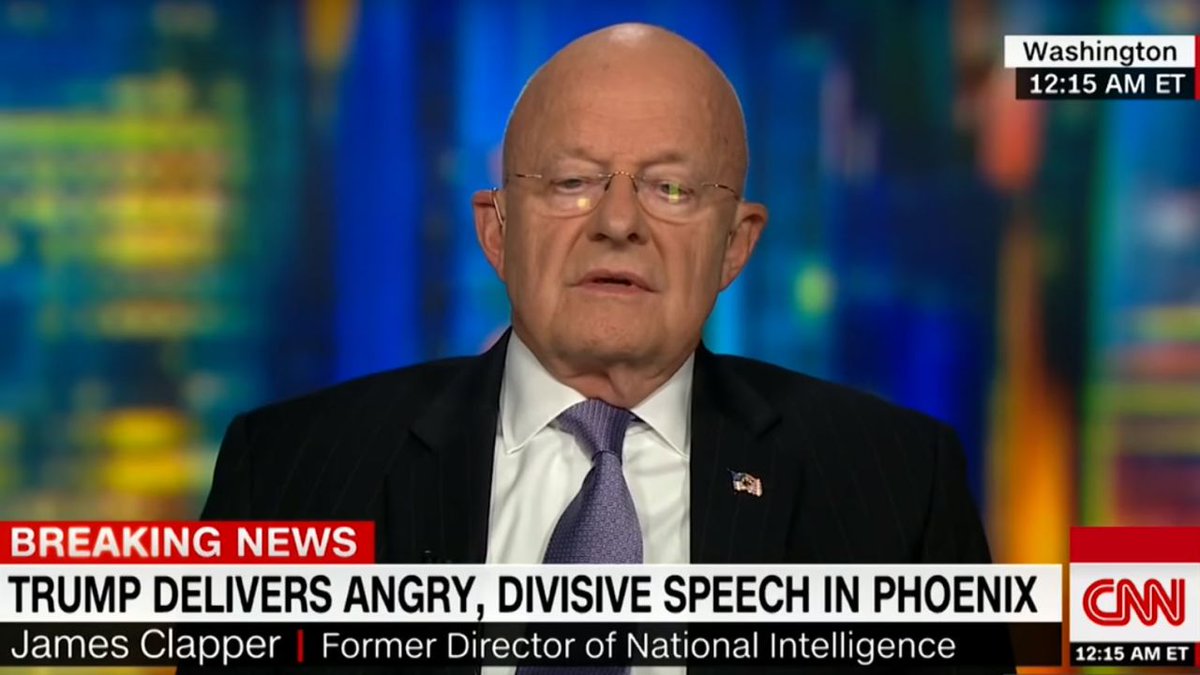 I also do not approve of his questioning "fitness to be in office."

Who is this liar to judge anyone?

He lied to Congress. He told them that the NSA was not collecting data on Americans and then we find out -- thank you, Ed Snowden -- that they are collecting metadata.

James Clapper is a liar who lied to Congress.


On March 12, 2013, during a United States Senate Select Committee on Intelligence hearing, Senator Ron Wyden quoted NSA director Keith B. Alexander’s keynote speech at the 2012 DEF CON. Alexander had stated that “Our job is foreign intelligence” and that “those who would want to weave the story that we have millions or hundreds of millions of dossiers on people, is absolutely false.... From my perspective, this is absolute nonsense.” Wyden then asked Clapper, “Does the NSA collect any type of data at all on millions or hundreds of millions of Americans?” He responded, “No, sir.” Wyden asked “It does not?” and Clapper said, “Not wittingly. There are cases where they could inadvertently, perhaps, collect, but not wittingly.”[31]
When Edward Snowden was asked during his January 26, 2014, TV interview in Moscow what the decisive moment was or why he blew the whistle, he replied: “Sort of the breaking point was seeing the director of national intelligence, James Clapper, directly lie under oath to Congress. ... Seeing that really meant for me there was no going back.”[32]


That is James Clapper.

He is not to be trusted.

Wednesday, August 23, 2017.  Chaos and violence continue, a reporter visits 'liberated' Mosul, the US government works overtime to prevent Kurdish independence, and much more.


From video report below: "The Baghdad government has declared victory.  But the threat still lingers.  There are still pockets of ISIS fighters  in the old city.  And this is what liberation looks like.  Iraq's second largest city, just ruins."

Yalda Hakim reporting from Mosul for the BBC.


At THE DAILY MIRROR, they have a photo essay featuring Carol Guzy's photographs of some of the Mosul survivors.


Meanwhile, it's apparently victory lap time for others.


Proud to serve with LTG Townsend, a nightmare for #ISIS as he led our @coalition campaign in #Iraq and #Syria over the past 12 months.

Mad Maddie Albright infamously declared on TV, in the 90s, that the death of 1/2 million Iraqi children was worth it.  She was still aglow, feeding on the blood of the dead.

Ten years later, she realized that gloating would follow her forever.

Will Brett be so proud in 2040?  When we have a strong estimate on exactly how many civilians were killed?


And the war drags on.

When Tal Afar falls, I guess they'll move on to the next "last #IS major redoubt in Iraq" -- the way that was once how they described Mosul.  Will that be Hawija?


W.J. Hennigan (LOS ANGELES TIMES)  passes on, "U.S. commanders say the offensive against the estimated 2,500 militants in and around Tall Afar will be grinding because Islamic State fighters built extensive defenses. Among them: They lined up derelict vehicles to push invading forces into a kill zone strewn with booby traps."  Really?


Because abandoned cars and trucks are directing the foot flow?

How many tons of bombs is the US coalition planning to drop on Tal Afar?


In other news, the US government again meddles in foreign elections.


Yesterday, Brett McGurk declared, "We believe these issues should be resolved through dialogue under the constitutional framework and that a referendum, at this time, would be really potentially catastrophic to the counter-ISIS campaign. We've mentioned that before. And so we've made that position very clear, but we are hopeful that this dialogue that's going on now can deliver some results."


But, Brett, the KRG is following the Constitution of Iraq, as you well know.

There's never a 'good time' for certain types to give up the reigns (and whip?) but there is a "right time" for it and I'd argue a referendum on Kurdish independence is long overdue.

And one of them [working for the referendum] is Zirian Fatah, from Kurdish Lobby Australia.
"Both my parents were freedom fighters, fighting on the front line against Saddam Hussein's dictatorship," he said. "As a child my bassinet was a suitcase."
Now, with dialogue rather than bullets, he's working to win support in Australia for the independence referendum.
"The reality of Iraq is it was always fictional. It was always a state that was sticky-taped together," he said.
"During the 1920s, the Kurds were promised their own state. Unfortunately, due to the superpowers — the British and the French — Kurdistan was divided and carved up amongst four host nations. We're hoping to see that undone now.
"The Kurdish people aspire to achieve their independence. It has been a long time coming, and it is an historic moment in time."


But the US government is attempting to stop the vote from taking place.


It's interesting, isn't it, how this happens in the open with no outrage in the US?


Contrast that with the still unproven charge that Russia 'hacked/interfered/mind controlled' the 2016 US presidential election.  Contrast it with the outrage and hysteria from Hillary Clinton's Temple Prostitutes.  Or crazed Hillary herself, right?


In the United States, IAVA issued the following:

NEW YORK, NY (August 19, 2017) – Today, Iraq and Afghanistan Veterans of America, the leading voice of the Post-9/11 generation of veterans, applauded the President’s signing of H.R. 873, establishing a memorial in Washington for our generation of warriors. This is the third IAVA legislative priority to become law in the last month, with another expected this week on VA appeals.

“We are proud to support a memorial for the Global War on Terror in the nation’s capital. We thank Andrew Brennan and the GWOT Memorial Foundation for their steadfast leadership, and members of Congress and the President for listening to veterans and acting quickly to sign this bill into law,” said Paul Rieckhoff, Founder and CEO of IAVA. “Eighty-two percent of IAVA members said that they support the creation of a memorial for veterans and their families of this era. Having a place for our generation to gather and mourn is vital to honoring all those who have served since 9/11. We’re proud to stand shoulder to shoulder with our VSO partners to ensure that veterans and their families have somewhere to reflect and remember the sacrifice of those in our community.”

IAVA has advocated for a Post-9/11 National Monument in its Policy Agenda for years. For the full IAVA recommendations on a national memorial, please see the 2017 IAVA Policy Agenda.
Note to media: Email press@iava.org or call 212-982-9699 to speak with IAVA CEO and Founder Paul Rieckhoff or IAVA leadership.

Iraq and Afghanistan Veterans of America (www.IAVA.org) is the leading post-9/11 veteran empowerment organization (VEO) with the most diverse and rapidly growing membership in America. As a non-profit founded in 2004, IAVA’s mission is to connect, unite and empower post-9/11 veterans. Celebrating its 12th year anniversary, IAVA has connected more than 1.2 million veterans with resources and community, and provided more than 7,300 veterans with personalized support from IAVA’s Master’s level social workers.