Will Hillary Clinton ever stop lying?

Right now, she is insisting she will introduce a Constitutional Amendment to overturn the Citizen United decision.

Do you know how hard it is to get a Constitutional Amendment passed?

We still do not have an Equal Rights Amendment.

It is that difficult.


Saturday, July 16, 2016.  Chaos and violence continue, Haider al-Abadi's government threatens peaceful protesters and takes down the internet, the IMF prepares their takeover of Iraq, and much more.

The chances of a liberated Iraq most likely vanished this week with the International Money Fund announcing:

The IMF has approved a three-year, $5.34 Billion loan for Iraq focused on implementing economic and financial policies to help the country cope with lower oil prices and ensure debt sustainability.

The loan will be provided under the Stand-By Arrangement facility and also includes measures to protect vulnerable populations—critical in a time of ongoing conflict, which has resulted in over 4 million internally displaced people.

There has been silence on this topic -- even among notable 'lefties' like Phylis Bennis -- as we noted January 15th, "Even though the IMF will be yet another form of occupation."

There was time for American left 'leaders' to voice their objection to this take over.

The May 19th snapshot noted:


Mohammad Tayseer and Dana Khraiche (BLOOMBERG NEWS) report, "Iraq has reached a $5.4 billion, three-year loan agreement with the International Monetary Fund to help OPEC’s second-biggest producer repair public finances damaged by the plunge in oil prices and war with Islamic State militants."
The revenge fantasies, where the daughter of Saddam Hussein must be captured and flogged in the streets of Baghdad?
They are raw meat tossed to the masses to distract them from the ongoing corruption in Iraq.
Billions of dollars have disappeared from the country's coffers as a result of corrupt politicians and officials.
Rather than fretting over the daughter of Saddam Hussein, they might ask how Nouri al-Maliki's son ended up with all those sports cars and residences outside of Iraq.
Where did that money come from?
How did Nouri's two terms as prime minister of Iraq leave him such a wealthy man?
Those are questions that need to be asked.
The Iraqi people live in squalor.
They have no dependable public services.
Baghdad floods in the raining season -- water up to the knees in some sections (including Sadr City) and that's due to the crumbling public infrastructure.
The corruption is not a secret.
There have been US Congressional hearings on the topic going back to the years when Bully Boy Bush occupied the White House.
Billions have been stolen.
And now the IMF is getting their hooks into Iraq.
THE JORDAN TIMES reports:


The IMF $5.4 billion loan to Iraq will have an annual interest rate of 1.5 per cent, Iraq's Central Bank Governor Ali Al Alak said at a press conference, following a week of talks with IMF officials in Jordan, Reuters reported.
The IMF deal will allow Iraq to secure additional financial aid of around $15 billion over the next three years, including securing international bonds, according to [Iraq's Finance Minister Hoshiyar] Zebari.


At this late stage, who's still pretending that the IMF helps out countries in trouble?

Pressured by lower-than-expected oil prices, Iraq will cut non-oil spending in its 2016 budget by 15 percent and take on several billion dollars in international debt, it said in a memo released by the International Monetary Fund on Thursday.

OPEC's second-largest producer, which relies on oil exports for nearly all its revenue, has sought donor support amid a collapse in global crude prices and a costly war against Islamic State militants that has displaced more than 3.4 million people.

It's already been cut.

The Iraqi people will suffer yet again.

The corruption is never-ending.

Which is why protests never end in Iraq.


Which is why even threats do not stop the protesters.

And threats were was issued Thursday ahead of Friday's protests.


AFP noted that the security forces issued an announcement that anyone protesting would be dealt with "as a terrorist threat."

Which raised the question of who's in charge of the puppet government in Iraq -- a question everyone in the press will work overtime to avoid.


Despite the threats, thousands turned out Friday. 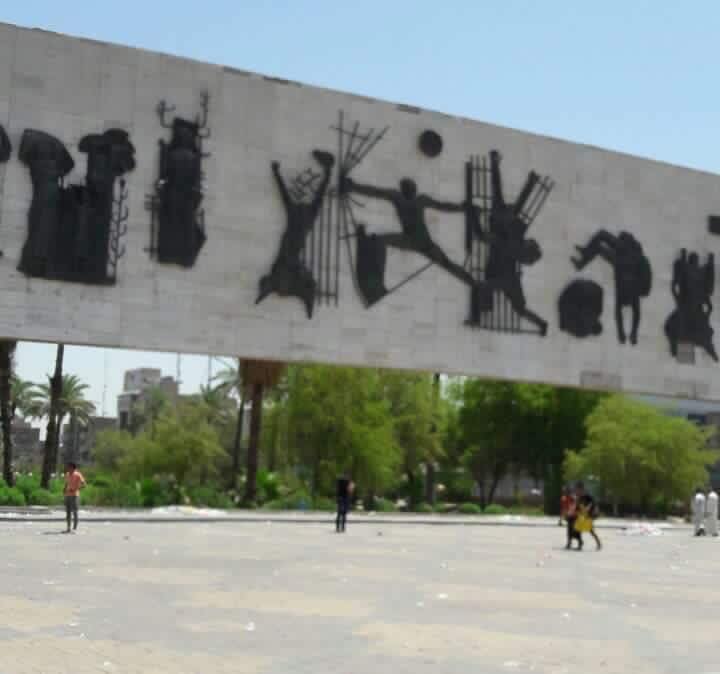 Iraqi Day ‏@iraqi_day  Jul 15
All the roads and bridges reopened in #Baghdad #Iraq after the demo over in less than 2 hours, No one knows why they went home quickly
0 retweets0 likes 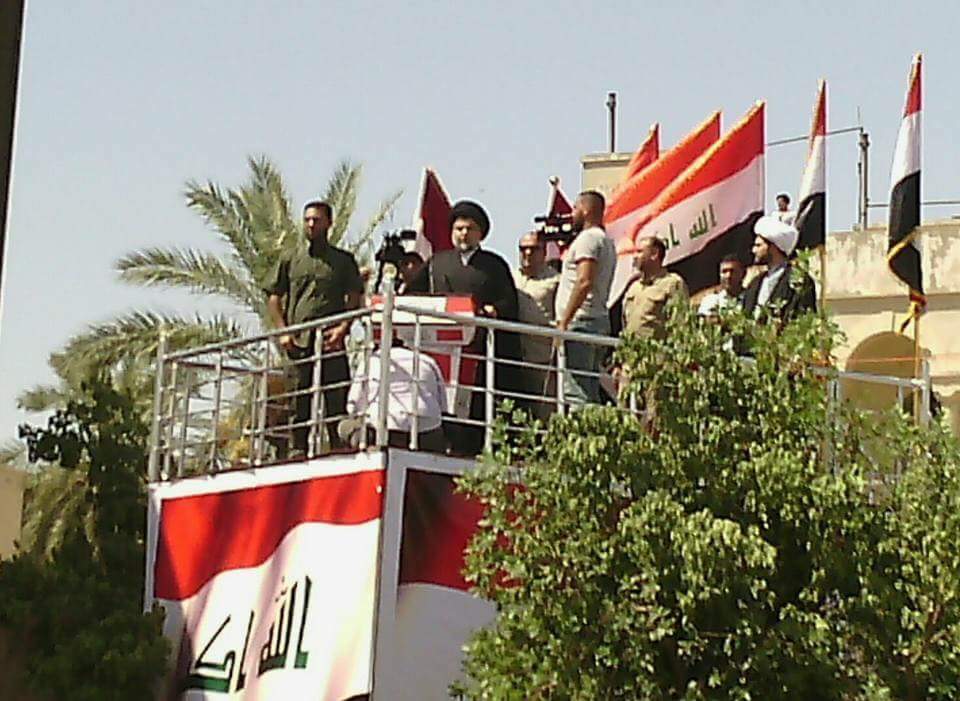 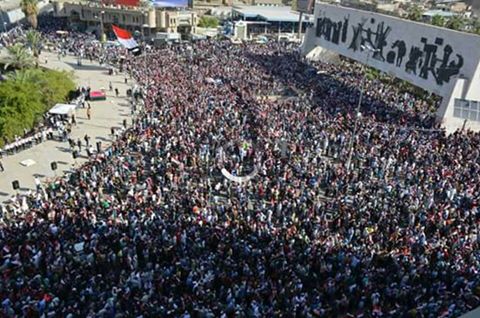 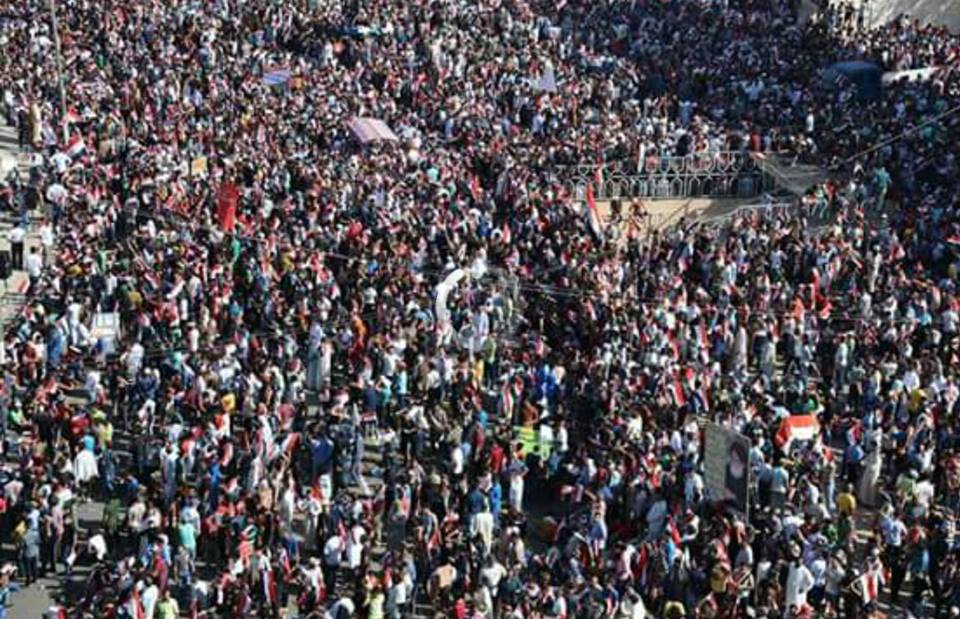 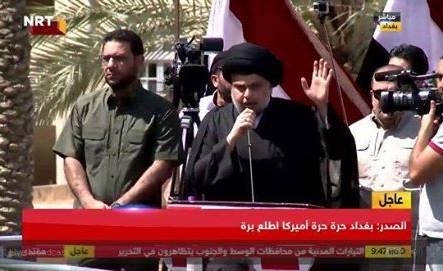 
The demonstrators massed in Tahrir Square on Friday, holding placards reading "Yes, yes to reform. No, no to sectarianism. No, no to corruption".
The protest went ahead despite the security forces warning late on Thursday that the rally called by the influential Shia cleric Muqtada al-Sadr was "unauthorised" and would be treated as a "terrorist threat".
Sadr has led repeated protests in recent months, some of them breaching the central Green Zone government and diplomatic compound.


Shi'ite cleric and movement leader Moqtada had halted protests during the holy month of Ramadan.


ALSUMARIA has a photo essay of the protest.


Shiite cleric, Muqtada al-Sadr, said in a speech, read to the crowd by an assistant, that their presence in Tahrir square was to demand fulfillment of comprehensive reforms in all institutions of the Iraqi state.
He added that they will continue to protest peacefully until the demands are met.
The cleric also called for the dismissal of corrupt state officials and those with special privileges, as well as calling for an end to the sectarian and political quotas in government jobs.

Sadr has led repeated protests, some of them breaching the central Green Zone government and diplomatic compound, calling for an end to what he says is a corrupt power-sharing system between the country's rival sectarian and political factions.
"Yes, yes to reform.  No, no to sectarianism.  No, no to corruption," read the placards brandished by protesters.


Threats did not stop the protesters.

Threats also did not prompt the White House or the US State Dept to issue any statement at all, let alone to condemn the Iraqi government's threat to treat civilian protesters as terrorists.

This is appalling and disgusting.

These are the craven acts of cowards who will not stand up in defense of democracy or humanity.

Instead, in their short term goals, they will back any dictator, any tyrant.

In addition to threats, the Iraqi government also shut down the internet.

The Iraqi government shut down internet access in the country for nearly four hours in response to mass protests in Baghdad. According to reports, the Internet access went down at 3.39 UTC, but was restored at 7.15 UTC. The outage was detected by internet performance company Dyn. Doug Madory, director of internet analysis at Dyn: “There’s a history of outages in Iraq, they seem to do this more and more these days for things as trivial as sixth grade exams. ... There was just a UN resolution condemning internet outages, and that was slightly in response to previous Iraqi outages."

That UN resolution came just two weeks ago, when the organisation published a paper called The promotion, protection and enjoyment of human rights on the Internet.
The resolution criticises the practice of shutting down internet access to citizens. While it was passed by consensus, certain countries such as China and Russia attempted to change parts of the resolution by changing the text of the resolution.
Other countries backed China and Russia’s view, such as Saudi Arabia, India, and South Africa.
But the resolution states: “The same rights that people have offline must also be protected online, in particular freedom of expression, which is applicable regardless of frontiers and through any media of one’s choice, in accordance with articles 19 of the Universal Declaration of Human Rights and the International Covenant on Civil and Political Rights.”
And the White House?
They rushed to condemn this attack on free speech?
No, of course not.
Barack Obama backed thug Nouri al-Malik until it was far too late.
He overturned the votes of the Iraqi people in order to give Nouri a second term.
He termed a blind eye to Nouri's abuses -- secret torture chambers (revealed by Ned Parker's reporting for THE LOS ANGELES TIMES), the disappearance of Sunnis, the beating and rapes of Sunni girls and women in the Iraqi jails and prisons, the attacks on Sunnis politicians, the attacks on peaceful protesters, etc.
From 2010 on forward, these abuses just piled up.
And Barack tolerated them.
Because he needed Nouri.
Finally in the second half of 2014, he replaced Nouri with Haider al-Abadi.
And he tolerates anything that Haider does today.
There is no higher ground for Barack to struggle to.
He is in the swamp, up to his knees in despots.
While there is no US effort made towards diplomacy or solving the political crisis in Iraq, the US government is more than happy to continue to drop bombs on Iraq.  Today, the US Defense Dept announced:


Strikes in Iraq
Attack helicopter and bomber, ground-attack, fighter, and remotely piloted aircraft conducted 10 strikes in Iraq, coordinated with and in support of the Iraqi government:


Ruth's "Lock her up, lock her up, throw away the key" went up earlier as did the following community sites: