Doug Henwood ‏@DougHenwood  Jul 18
I just don’t get this liberal certainty that HRC is going to win. She’s 2 points ahead, not 20.

There has been no 'bump' yet for Hillary Clinton.

I think that goes to exactly how weak she is as a candidate.

They picked her, the superdelagates.

It is on them.

Tuesday, July 19, 2016.  Chaos and violence continue, Nouri al-Maliki runs from a public appearance, War Criminal Tony Blair may get sued, Falluja was no success and now Mosul will be next,  Sibel Edmonds and MEDIA LENS hold the media accountable, and much more.

The Iraq War Families Campaign Group launched an online appeal to the raise £50,000 to "bring to justice those responsible for the war and the deaths of our loved ones" earlier today.
In the less than a day they have managed to attract 1,428 backers.
They now have their sights on raising £150,000 to cover legal costs.

THE MIRROR adds, "It comes weeks after the Chilcot report tore into Mr Blair, other leading politicians and senior officials over their actions before, during and after the conflict, in which 179 British service personnel died."  Adam Taylor (WASHINGTON POST) notes, "Blair came under renewed scrutiny after the release of the Chilcot inquiry. The report included evidence suggesting that he had misrepresented intelligence ahead of the war. In one memo from July 2002 before the war, Blair writes to President George W. Bush that 'I will be with you, whatever' -- which many took as implying that he would support the war, no matter the opposition."

But while those injured by Tony Blair have to crowd source to get money for legal bills, Robert Mendick and Ben Farmer (TELEGRAPH OF LONDON) explain, "Taxpayers will be obliged to pay all Tony Blair’s legal bills if he is sued by the families of soldiers killed in Iraq."


From thug to thug, Nouri al-Maliki.

Bully Boy Bush made Nouri prime minister in 2006.  He was not a success.  In 2010, Iraq held elections.  Nouri lost.  He then refused to step down and brought the country to a halt for eight months -- the political stalemate.

At the start of the stalemate, May 2010, Peter Kenyon (NPR's MORNING EDITION) spoke with Iraqis including Durgham Sabah:

"Why is that? Allawi got the most seats, and the constitution says he should form the government," Sabah says. "If Maliki had won, you can bet the government would have been formed in a hurry. What has Maliki done? Four years and we have no security, no jobs, no water, no electricity."


Maliki has shown so far that he is determined to continue as prime minister. His insistence prevented the formation of a single Shi’i coalition before the election, leading to the emergence of Maliki’s own State of Law (SoL), which he dominates, and the Iraqi National Alliance (INA), which groups the other important Shi’i parties and personalities, including the Iraqi Supreme Council of Iraq (ISCI), the Sadrists, the Badr organization, and former Prime Minister Ibrahim Jafari. Maliki’s insistence that he must remain prime minister has kept the new parliamentary Shi’i bloc, the National Coalition—which includes State of Law and the INA—from speaking with one voice. Instead, the parties in the INA are negotiating separately with Iraqiya and the Kurdish parties, and have even established their own diplomatic contacts with other countries in the region.

So how did he become prime minister for a second term?

Barack Obama gave it to Nouri.

He had the US broker a deal -- the Erbil Agreement -- a contract which went around the voters of Iraq and gave Nouri a second term in exchange for power sharing concessions Nouri agreed to.

It was a legal contract and all the parties, including Nouri al-Maliki, signed it.

November 10, 2010, The Erbil Agreement is signed.  November 11, 2010, the Iraqi Parliament has their first real session in over eight months and finally declares a president, a Speaker of Parliament and Nouri as prime minister-designate -- all the things that were supposed to happen in April of 2010 but didn't.


March 7, 2010, Iraq concluded Parliamentary elections. The Guardian's editorial board noted in August 2010, "These elections were hailed prematurely by Mr Obama as a success, but everything that has happened since has surely doused that optimism in a cold shower of reality."

How right they were.

In 2012, the International Crisis Group noted:


Maliki has lost the trust of much of the political class. At the same time, the opposition is divided on fundamental issues and on whether to push Maliki to implement the 2010 Erbil power-sharing agreement or remove him altogether. The odds that his opponents can muster enough votes to unseat him are low. Even should they succeed, they are highly unlikely to find common ground to form a new government, leaving Maliki as caretaker premier until the next elections in 2014. In the meantime, the government will find it increasingly difficult to govern and all Iraqis will pay a price.
“There is no question that Maliki has added to his powers during his six-year tenure, but there also can be no question that a large part of his success comes from his rivals’ incapacity to thwart him via institutional means”, says Joost Hiltermann, Crisis Group’s Middle East and North Africa Deputy Program Director. “Maliki should implement the 2010 power-sharing deal and pledge to step down at the end of his term for the sake of national unity; his rivals should call off efforts to unseat him and instead use their parliamentary strength to build strong state institutions and help ensure that the next elections are free and fair”.

Nouri refused to follow the contract he signed, the one where Barack gave him a second term.

Instead, he persecuted the Sunnis which led to the Islamic State getting its foothold in Iraq.

Finally, in the second half of 2014, Barack insisted Nouri step down and that Haider al-Abadi become prime minister.

Today, Nouri was supposed to be in Halabja and he was going to give some sort of 'victory' speech of some kind.  Maybe a victory for Iraq that he's not prime minister?

ALSUMARIA reports that Nouri had to cancel the engagement.  An official with the Kurdistan Democratic Party explains that a major protest was planned -- one against Nouri -- and that it would have caused a major embarrassment for Nouri.

Fallujah was seized by IS roughly two years ago and has since then been bombed by the government. The US-Coalition has also bombed the city for 22 months. Almost 4000 dead civilians have during this period been brought to the Fallujah General Hospital, now the only hospital in Fallujah. Many of the staff have fled and the lack of medicines is great. The hospital is partially destroyed by the government´s attacks. For months the city has been encircled by US-trained government forces with military advisors from both the US and Iran and of feared pro-Iranian, uncontrolled para-military forces. These are committing crimes against international law of the same sort as IS: imprisonment, murder, torture and ethnic cleansing.
The severe war crimes and crimes against human rights being committed by IS, both in areas they control and against innocent civilians in many Iraqi cities, must not hide or diminish the crimes of the US-Coalition, the government or the militia.

A real victory over IS requires even the participation of the Sunni population. Without them Iraq cannot be unified and achieve national reconciliation.

Falluja, the city the press ignores.

So concerned about 'advancement' on Falluja, no concern about the people.

The press didn't want to call it that or even report on it.

They suddenly found interest in September of 2014 when Haider al-Abadi announced he had ordered the military to cease bombing.

But, here's the thing, the day after his announcement, the bombing resumed.

They all rushed to cover his announcement -- the western media.

They just failed to cover the fact that the bombing never ended.


So is it really surprising that they won't cover the realities of Falluja?


Here are some they rush to ignore.


And after those 'successes,' they are preparing to 'liberate' Mosul?


MEDIA LENS continues calling out the media on Iraq and most recently noted:

Media Lens ‏@medialens  22h22 hours ago
It took four months to get this into @guardian in 2004 and we were never invited back. #Iraq http://www.theguardian.com/politics/2004/dec/15/media.pressandpublishing … 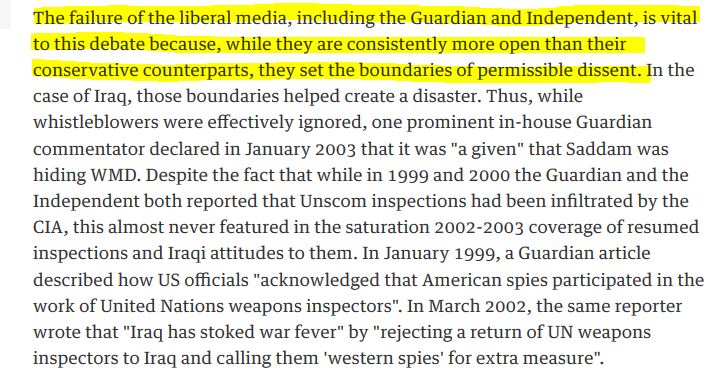 And whistle-blower Sibel Edmonds connects media lies on Iraq back then with current media lies:

Strikes in Iraq
Attack, fighter, and remotely piloted aircraft and rocket artillery conducted 10 strikes in Iraq, coordinated with and in support of Iraq’s government:

-- Near Hit, a strike struck an ISIL vehicle bomb-making facility.

-- Near Qayyarah, two strikes destroyed an ISIL headquarters and an ISIL training camp.

-- Near Tal Afar, a strike struck an ISIL headquarters.