Anyone else would be going to prison

I am not a big fan of David Shuster but I am noting him for that reason.

We do not often agree.

But on Hillary Clinton's e-mails we do.

Anyone else would be going to prison.


Tuesday, July 5, 2016.  Chaos and violence continue, Iraq's Interior Minister 'resigns,' the UN calls out the targeting of Sunni civilians in Iraq, the death toll from Baghdad's suicide bombing over the weekend has risen to 250, and much more.

Saturday's snapshot noted a Baghdad suicide bombing that had just taken place (it was Saturday night here in the US, already Sunday in Iraq).  The death toll from that bombing has continued to rise.  BBC News notes, "The death toll from Sunday's suicide bombing in the Iraqi capital, Baghdad, has risen to 250, the Iraqi government says, making it the deadliest such attack since the 2003 US-led invasion."

aaliyah ‏@foreigntrashbag  5h5 hours ago
"They came to buy clothes for Eid, now they are buying coffins" #Iraq #Eid2016 Danny Postel ‏@DannyPostel  6h6 hours ago
"They were looking for human remains. But all they found were some shoes and a pile of black ash." #Iraq
38 retweets14 likes

Rana H. ‏@RanaHarbi  Jul 4
One of the 200+ civilians killed in #BaghdadBombing Mustafa Al-Khaqani ‏@Khaqani_M  18h18 hours ago
Mother of the groom-to-be Akram al-Karradi who was martyred in Karrada, she is holding his wedding suit. #Baghdad 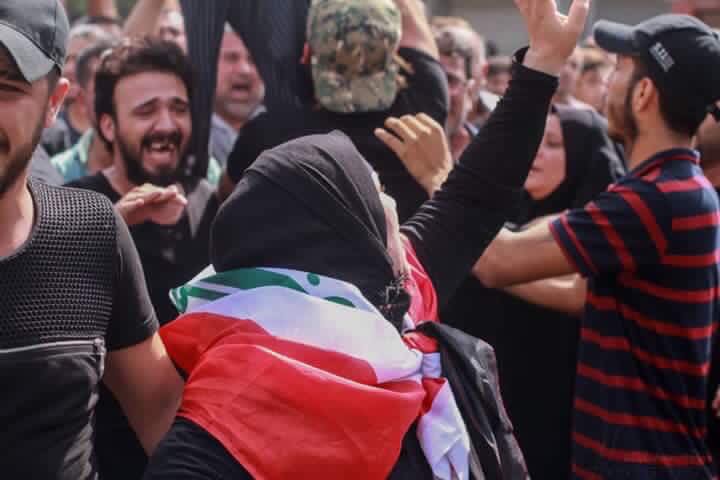 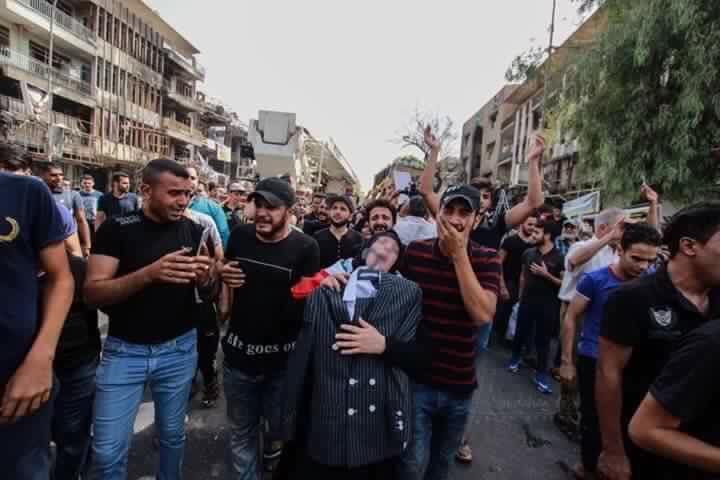 
Even with the death toll now rising to 250, the attack does not appear to register across the globe the way other attacks in other countries have -- a point made on Twitter:

T ‏@taygogo  Jul 3
Where are the #PrayForIraq hashtags? Where are the Iraqi flag avis? Where is the global concern? Nowhere.
293 retweets282 likes

Noor ‏@Noorrii3  Jul 3
Will Facebook respect by giving the users an Iraqi flag to put over their profile pictures like they did for Orlando & Paris? #PrayforIraq
259 retweets293 likes

Rana H. ‏@RanaHarbi  Jul 3
So will monuments around the world light up with the colors of the Iraqi flag after Baghdad bombings that left hundreds killed, injured?
304 retweets316 likes

T ‏@taygogo  Jul 3
Where are the #PrayForIraq hashtags? Where are the Iraqi flag avis? Where is the global concern? Nowhere.
293 retweets282 likes


The tragedies in Paris and in Orlando, Florida are real and painful.  So is the tragedy of the suicide bombing in Baghdad.

Maybe in the west, we've grown immune to caring about violence in Iraq or the victims of it?  Maybe we choose to ignore it because there's culpability on our hands?  Whatever the reason, there's no denying that 250 people -- at least -- lost their lives and this is a tragedy and it is an outrage.

On the culpability we in the west share, BBC  NEWS interviews Kadhim Sharif Hassan al-Jabbouri who took part in the 20003 "toppling of the famous statue of Saddam Hussein in central Baghdad"


Kadhim Sharif Hassan al-Jabbouri: Now, when I go past that statue, I feel pain and shame.  I ask myself - why did I topple this statue? I'd like to put it back up, to rebuild it. I'd put it back up but I'm afraid that I'd be killed.


BBC NEWS: Kadhim Sharif Hassan al-Jabbouri used to repair Saddam Hussein's motorcycles. But then he fell out of favour and was jailed for a year and a half.


Kadhim Sharif Hassan al-Jabbouri:  More than 14 or 15 people in my own family were executed by Saddam. So I was so happy the day that the Americans came and got rid of Saddam's oppressive regime.


And we'll stop him there because that's where the distortions and lies start.


Since around 2009, he's been making these statements about wanting Saddam back.  We'll assume that they are true statements since they are consistent.

But he's not accurate after that point.

July 3, 2004, David Zucchino's "Army Stage-Managed Fall of Hussein Statue" was published by THE LOS ANGELES TIMES.  In April of 2008, he discussed the report with Rachel Martin on NPR (link is audio and transcript):


Mr. ZUCCHINO: My impression was that there was a spontaneous rally by Iraqis and they jumped on the statue and basically pulled it down. I knew there was some U.S. soldiers or Marines in the area, but I was not clear on exactly what their role was, whether they were just providing security or were taking part. It was fairly nebulous.


MARTIN: So you dug up more specifics that cast light on those circumstances surrounding the toppling of the statue. Explain what you found out.


Mr. ZUCCHINO: This was part of a five-hundred-and-some page review, or report, by the Army on the entire invasion, what went wrong and what went right. It was sort of an After Action Report, and this was just sort of a one or two page sideline, almost a footnote.
They had interviewed an Army psychological operations' team leader and he described how a Marine colonel - the Marines were in charge of that area and had just come in, and this Marine colonel had been looking for a target of opportunity, and seized on that statue.
And according to this interview with the psy-ops commander, there were Iraqis milling around the statue, and in fact, had been beating it with sledgehammers and apparently thinking about trying to bring it down, but it was a huge statue and they had no way to do that. So the Marines came up with the idea of bringing in a big recovery vehicle, like a wrecker, and trying to bring it down that way.
But the psychological operations commander noticed that the Marines had put an American flag on the statue and he thought that was a terrible idea, because it looked like an occupation and he didn't want - the psychological ops didn't want that, so they replaced it with an Iraqi flag, hooked a cable up to it and started pulling it down.
But somebody had the bright idea of getting a bunch of Iraqis and a lot of kids and pile them on the wrecker to make it look like a spontaneous Iraqi event, rather than, you know, the Marines sort of stage-managing this entire dramatic fall of the statue.


MARTIN: So we can't say that it was the idea of this Marine colonel. He basically was surveying the circumstances, saw that there were Iraqis who were already kind of attacking the statue, and so the U.S. military, according to this report, just facilitated something.

Mr. ZUCCHINO: Correct. They took advantage of an opportunity. As he said, it was a target of opportunity, and they just sort of stage-managed it and made it happen in a way that it would not have happened if the Marines had not intervened.


Again, we'll grant that Kadhim Sharif Hassan al-Jabbouri's sentiments regarding Saddam Hussein are true since he's repeatedly made them to the press beginning in 2009.  But we're not going to include his fantasy of how the statue came down when that myth was long ago disproven.


Another thing that is true -- though probably just a stunt -- is a resignation.  Saif Hameed and Ahmed Rasheed (REUTERS) report, "Iraq's interior minister resigned on Tuesday and said a deputy would take over his responsibilities, a few days after the deadliest of many car bombings in Baghdad since the 2003 U.S.-led invasion."  Probably just a stunt?  US-installed prime minister of Iraq Haider al-Abadi has yet to accept the resignation.

Mohammed al-Ghabban has long been a source of controversy.  The Shi'ite politician has been accused of misusing the Ministry of the Interior to target Sunni civilians.  He's a member of State of Law, the political slate former prime minister and forever thug Nouri al-Maliki started in 2009.

"I have tendered my resignation to Prime Minister [Haidar] al-Abadi," he said.
"I can withdraw it again in the event that the security apparatus is adequately reformed," he added.


That's why we're calling it a stunt.

You don't announce you're resigning and then, in the next sentence, that you might withdraw your resignation.  This is a stunt.


The government has assured people that ridding Falluja -- about 65 kilometers (40 miles) west of Baghdad -- and the rest of Anbar province of the terror group would deliver improved security to the capital, but it hasn't been the case.
Instead, Baghdad has suffered the deadliest of a string of terror attacks across the world executed or inspired by ISIS during the Muslim holy month of Ramadan.

There are a hundred other topics I'd love to cover but this snapshot is already too long.  We have to cover the big news of the day regarding War Hawk Hillary Clinton: the FBI's announcement regarding her e-mails.  Activist and Academy Award winning actress Susan Sarandon's done a great job on Twitter so we'll grab from her:

I know people threatened with having clearance stripped and prosecution for a SINGLE instance of accidental mishandling of classified...
897 retweets940 likes

Glenn Greenwald ‏@ggreenwald  15h15 hours ago
Comey: people who did what Clinton has done are "often subjected to security or administrative sanctions" - but not prosecuted.
344 retweets381 likes


Larry Johnson's a political independent and a national security analyst who is also former CIA.  At his blog NO QUARTER, he shares his thoughts which include:


The facts are compelling and the lies of Hillary totally exposed:


He offers his take on the FBI announcement today and he also links to an important fact check by the AP.