Not everyone was pleased 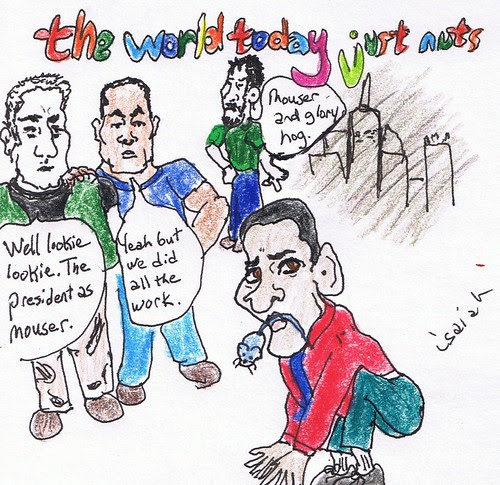 The Daily Mail reports on the ceremony and notes Debra Burlingame:

Her brother, Charles Burlingame, was the pilot whose plane crashed into the Pentagon.

She said she was pleased Bin Laden had been killed, but was shocked when Mr Obama turned his back when she confronted him over the prosecution of the CIA agents who interrogated 9/11 mastermind Khalid Sheikh Mohammed.

'And then he hugged me, but then I said I have a question for you.'

She said: 'As a former attorney I know you can't tell the Attorney General what to do, he said, "No, I can't."

But I said "we - that shouldn't stop you from giving your opinion. We wouldn't be here today if they hadn't done their jobs. Can't you at least give them your opinion."

And he said "no I won't," and he turned around and walked away.'

Others who are furious include Todd Beamer's father. Remember his story? He was on the plane that crashed. The one that everyone assumes was headed for somewhere like the White House but crashed in a field in Pennsylvania after what we assume was a successful passenger revolt. Beamer and Mark Bingham and others were said to have figured out that they had to fight back because this was not a normal hijacking with demands and then release of hostages (they were speaking to loved ones from the airphones on the plane). And I believe it was Todd Beamer who said, "Let's roll" -- meaning they should go ahead and execute the plan. "Let's roll" became an iconic phrase as a result.

I think Barack Obama was an idiot. I think it was nothing more than a photo-op -- the same as George W. Bush did -- and it would have shown far more respect for him to have stayed in DC, gone to a Pentagon function (as Joe Biden did today). Instead, he truly was a glory hog and I am sure there are many others who lost loved ones who are hurting today as a result of his actions.

In addition, Reuters notes a Mussayab roadside bombing, a Tuz Khurmato roadside bombing which claimed 2 lives and left four injured and, dropping back to last night, a Mosul doll bombing which injured three people. Aswat al-Iraq notes that Lt Brig Moayed Khalil Abdul-Aziz of the Ministry of Defense was assassinated today in Baghdad. And as the violence continues, Aswat al-Iraq reports, the Surpeme Iraqi Islamic Council's Ammar al-Hakim expresses his disapproval of the continued inability to fill the security positions, "The delay of the said issue has become unjustified with the presence of efficient candidates for those posts, who had been nominated by some political blocs." And while al-Hakim is dismayed by Nouri's continued inability to name those positions, equally true is that the clock is ticking for Nouri on his own self-appointed deadline. Alsumaria TV notes there are only 33 days left in Nouri's "100 days" to change. In the face of continued protests and unable to stop them via curfews, demonizations or assault, Nouri proposed that he would have corruption licked in 100 days. It would be a new government, one without corruption. Alsumaria offers three positions known to be taken. The National Alliance is backing a vote of no confidence for Nouri while Iraqiya wants "wider reform" and th Kudistan Alliance sees it all as talk to motivate Cabinet ministers to get focused on the issue.

Amna Abdel-Aziz (Al Sabaah) reports that in the worst areas of Baghdad, mud houses are being built from mud and scraps and waste, discarded trash, which further risks exposure to disease in an area plagued by insects, rodents, stray cats and dogs. Hussein Abdul-Jabbar states he was living with his brother but the brother's home was too small for both families so he built his mud home from scraps. (We're not as stupid as NPR which, on Monday, reported 'polling' done at the barrel of a gun as honest answers. Meaning, this is what the man told the press. Did he really move his family into a mud home due to lack of space? Who knows. But that is the story he told the press. It might be true, it might be a face saving move.) Khamis Abdallah Venus states that many suffering Iraqis live in mud homes and try to maintain their dignity. He says officials are not listening to voices or coming up with solutions. Muhammad al-Shammari, the Deputy Governor of the Province, states that they are aware of the homeless issue and are constructing public housing which will provide for 5,000 families.

When that would happen isn't stated but the story is making the rounds of the Arabic media and may be in response to recent news of homes being provided for government officials. From Tuesday's snapshot:

Different topic, Alsumaria TV reports the good news: "Iraq Ministry of Housing said on Monday that the Iraqi government approved its plan to build housing units with low prices in the provinces for the employees of the ministry and the public servants." Well . . . good news if you work for the Cabinet. In a country where the people feel the government is not representing them, it is really smart to be promoting projects that benefit the government? And is this really that different from the earlier scandal where land was being given to government workers? Something that outraged many Iraqis? From the April 27th snapshot, "Al Sabaah reports that the Cabinet has put an end to employees of 'the three presidencies' (Iraq's president and two vice presidents) grabbing up residential land plots. Dar Addustour calls it a 'private ownership scheme'."

In other news, Haider al-Rubaie Filaih (Al Sabaah) reports that, at Baghad markets, there is an increase in the price of electric fans and generators as a result of the increased temperature (which will only get higher as the summer arrives and will include many over-100 degree days).
Yesterday's snapshot covered the Senate Armed Services Subcommittee on Personnel and, last night at Rebecca's site, Wally shared his observations of that hearing. On veterans issues, Senator Patty Murray is the Chair of the Senate Veterans Affairs Committee and has just worked very hard to successfully 'encourage' (force) the VA to comply with the Caregivers and Veterans Omnibus Health Services Act of 2010 -- which needed compliance since Congress passed it thereby making it the law of the land. Today her office released the following on other legislation:
(Washington, D.C.) - Today, U.S. Senator Patty Murray, Chairman of the Senate Veterans' Affairs Committee introduced legislation to increase veterans' compensation through a Cost-of-Living Adjustment (COLA). The COLA increase would affect several important benefits, including veterans' disability compensation and dependency and indemnity compensation for surviving spouses and children. It is projected that over 3.5 million veterans and survivors will receive compensation benefits in Fiscal Year 2012.
"It's been two years since our veterans saw an increase in their benefits through a COLA, and those have been two difficult years," said Chairman Murray. "In a still challenging economy so many of our veterans depend upon the benefits they receive in order to meet their most basic needs, as well as those of their spouses and children. We have an obligation to the men and women who have sacrificed so much to serve our country and who now deserve nothing less than the full support of a grateful nation. A COLA increase will help brings us one step closer to fulfilling our nation's promise to care for our brave veterans and their families."
The Veterans' Compensation Cost-of-Living Adjustment Act of 2011 directs the Secretary of Veterans Affairs to increase the rates of veterans' compensation to keep pace with a rise in the cost-of-living, should an adjustment be prompted by an increase in the Consumer Price Index (CPI). The bill specifies that the increase would affect veterans' disability compensation, dependency and indemnity compensation for surviving spouses and children, and certain related benefits.
The COLA increase for veterans will match the annual increase provided to Social Security recipients. The COLA is designed to offset inflation and other factors that lead to the rising cost of living over time. The COLA rate is based on the Bureau of Labor Statistics Consumer Price Index.
A bipartisan group of Senators signed on to co-sponsor the bill including the Committee's Ranking Member Senator Richard Burr (R-NC) as well as Senator John D. Rockefeller IV (D-WV), Senator Daniel Akaka (D-HI), Senator Bernie Sanders (I-VT), Senator Sherrod Brown (D-OH), Senator Jim Webb (D-VA), Senator Jon Tester (D-MT), Senator Mark Begich (D-AK), Senator Johnny Isakson (R-GA), Senator Roger Wicker (R-MS), Senator Mike Johanns (R-NE), Senator Scott Brown (R-MA), Senator Jerry Moran (R-KS), and Senator John Boozman (R-AR).