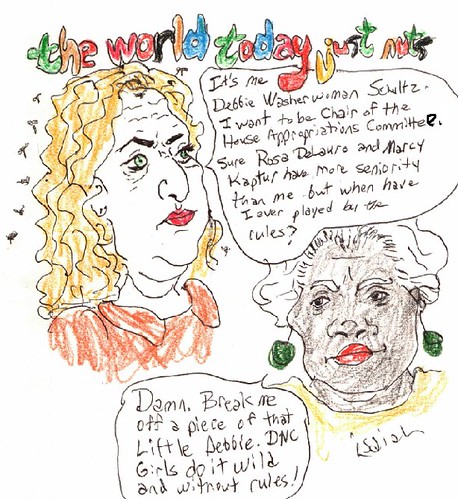 And I want to also note this video from Canada's CBC.

Monday, December 7, 2020.  The Pope plans a visit to Iraq, a fluffer tries to smooth over the realities of Iraq, and much more.

The big Iraq news today?  It's the Pope.  CNN notes, "Pope Francis will travel to Iraq in March 2021, the Vatican press office announced on Monday."  THE GUARDIAN adds, "The Vatican spokesman, Matteo Bruni, said the pontiff, who turns 84 next week, would visit the capital, Baghdad, and Ur, a city linked to the Old Testament figure of Abraham, as well as Erbil, Mosul and Qaraqosh in the Nineveh plains, from 5-8 March. It will be his first trip in more than a year after all his overseas visits were cancelled because of the coronavirus pandemic."  Francis became the Pope (and became Francis) March 13, 2013.  He was born, in Argentina, Jorge Mario Bergoglio and took the name Francis in honor of Saint Francis of Assisi.  Prior to the pandemic outbreak, the Pope had visited many countries including Cuba, Israel, the United States, Bosnia, Ireland and the United Arab Emirates.  The visit to Iraq would be the Pope's first international visit in 15 months.  Devin Watkins (VATICAN NEWS) explains:

The Pope’s visit will come as the realization of a dream of his predecessor, Pope St. John Paul II. The Polish Pope had planned to travel to Iraq at the end of 1999. That trip never came to be because after lengthly negotiations, Saddam Hussein postponed it.

According to Cardinal Louis Raphael Sako, the Patriarch of Babylon of the Chaldeans, Pope Francis will receive an enthusiastic welcome to Iraq.

He told SIR news agency a year ago that “everyone in Iraq, Christians and Muslims, esteem him[Pope Francis] for his simplicity and nearness. His words touch everyone’s hearts because they are those of a shepherd. He is a man who brings peace.”

President Barham Saleh had officially invited Pope Francis to visit Iraq in July 2019, hoping it would help the country “heal” after years of strife.

About 100,000 Christians are left in Iraq following sectarian warfare after the 2003 invasion led by the United States and ISIL’s (ISIS) sweep through one-third of the country in 2014.

If the visit takes place in March of next year, it will be the first visit of any Pope to Iraq, as Philip Pullella (REUTERS) notes.  It's also noted in the following Tweet:

Pope Francis will be the first head of the Roman Catholic Church to visit Iraq, where the number of Christians has dropped dramatically over the past two decades.

Pope plans historic Iraq trip in March 2021
Francis will be the first head of the Roman Catholic Church to visit Iraq, where the number of Christians has dropped dramatically over the past two decades

His Holiness the Pope will visit Iraq in March 2021. The journey of Pope Francis to Mesopotamia- cradle of civilization, birthplace of Abraham, father of the faithful- will be a message of peace to Iraqis of all religions & serve to affirm our common values of justice & dignity
5:41 AM · Dec 7, 2020

Marie Dennis, the former long-time president of Pax Christi International, told NCR the trip is "a beautiful example of active nonviolence, a visible sign of stepping into violence in order to diminish its power and highlight the possibility of just peace."

Judy Coode, coordinator of Pax Christi's Catholic Nonviolence Initiative, highlighted the effect of the coronavirus pandemic on Iraqis. She said the country's healthcare system had been "decimated and overwhelmed" after years of war.

"Pope Francis' decision to visit Iraq calls our attention back to one of the most vulnerable communities on earth, a population terribly affected by Covid," said Coode. "He’s reminding us that the people of Iraq continue to struggle with a violent destabilization created by outside actors, including the United States."

His visit?  It may take place.  It's based on an improvement in the coronavirus cases -- counting on the numbers going down.  If it takes place, it will come at a very needed time.  UNAMI notes:

Reported COVID-19 cases across Iraq continue to rise but at a slightly lower rate than in previous weeks, with a regular average of 2,500 daily reported cases during November. In recent weeks, the Government of Iraq increased its testing capacity beyond 20,000 tests per day. Initial reports indicate that despite the increase in the number of tests, the daily number of COVID cases across the country is decreasing. The number of individuals who have contracted the virus as of 5 December stands at 564,200 cases, with over 62,000 additional cases in comparison to the last update. Close to 30 per cent of these cases have been detected in Baghdad, followed by Basrah, Erbil, Sulyimaniyah and Wassit Governorates, the infection rate is rising other governorates including Duhok. Similarly, the number of deaths has increased to a total of 12,432. The Government of Iraq (GoI) and the Kurdistan Regional Government (KRG) have conducted over three and half million tests.

The conronavirus takes a toll on society as a whole.  It makes up stressed, depressed and exhausted. Some consider suicide.  In Iraq, the suicide rate had already increased a year before the pandemic outbreak.   Zainab al-Mshat (DARAJ) reported last month:

The number of suicide cases across Iraq reached 549 in 2019 ... The reasons behind them are many, including simply, "the pain of life." This is mostly due to the economic deterioration, and high poverty and unemployment rates in the country.

Because she didn’t have the courage to set her body on fire, shoot a bullet through her temple, or wrap a noose around her neck, Sanaa (26 years old) chose to swallow a mixture of pills that she’d gathered from the medicine available in her home. Hours later, her sister heard her moan, a sound that escalated as her pain intensified, and she was subsequently transferred to the hospital for gastric lavage.

Sanaa escaped her death by suicide, without her family knowing why she had done it. Her brother, who is seven years older than her and now lives in Germany, knew why: When Sana was fifteen, he had sexually assaulted her. She was having a glass of water in the kitchen, and when she closed the refrigerator door, she found her brother standing behind her, thrusting his body onto hers, and forcing his hand onto her mouth to prevent her from screaming …

Sanaa failed to commit suicide and survived, whereas 132 other women had “succeeded” from the beginning of 2020 until September 20. Additionally, 169 male cases of suicide were also recorded, bringing the total to 301 suicide cases recorded by Iraq in nine months. Baghdad topped the list with 68 suicides, distributed between 40 female and 28 male cases.

In the Shula district, west of Baghdad, Abdul Rahman (30 years) was found hung by a rope in his house, which was not a residence that was “suitable for human life,” according to his mother’s words. His father, the breadwinner of the family, died when Abd al-Rahman was ten years old, so the boy took responsibility for the family at an early age: “My son was not reluctant to assume this responsibility, although he did often complain about it. His bad luck prevented him from getting employed at a government job that would have been dignified, despite the fact that he had obtained a bachelor’s degree from the College of Administration and Economics at the University of Baghdad.”

Though born in Iraq, Kadhimi left for the United Kingdom in the 1990s, where he worked as a journalist and eventually acquired British citizenship. He continues to be a dual Iraqi-British citizen. After the Baathist regime collapsed in 2003, he came back and started working as the executive director for the ‘Iraq Memory Foundation’, (2003-10), an organisation which documented the crimes committed by Saddam’s regime.1 Later, he co-founded the Iraqi Media Network (al-Iraqiya), served as editor-in-chief of Newsweek Iraq (2010-13) and editor of Al-Monitor’s Iraq Pulse (2013-16).

Kadhimi is viewed as a pro-American figure by groups that are close to Tehran, although such labelling could merely be an oversimplification. In fact, initially in March 2020, major Shia factions rejected his nomination, accusing him of being inordinately close to the US. The Fatah Coalition, composed of major Shia groups close to Iran, later accepted Kadhimi’s nomination. However, the tensions between Kadhimi and various factions have continued and exacerbated since he became the prime minister. His approach though has tended to strike a balance with Iran on the one hand and the US and its allies on the other. He has also been described as a ‘friend’ of Saudi Arabia’s Crown Prince, Mohammad bin Salman (MBS).2

What a cute, little piece of fluff.  The first sentence alone required clarification.  Dual-citizenship?  Since 2015, Parliament has pushed for a law that Iraqi officials were not allowed to hold dual citizenship.  It's a measure with huge support in the Iraqi street.  But it doesn't even matter to the fluff head, he just types away with no awareness at all.

The fluff headed rush to pretend that all is okay in Iraq.  They do that because all is not good in Iraq.  For example, MENAFM -- AFGHANISTAN TIMES notes:

International Committee of the Red Cross operations in Afghanistan and Iraq face a funding crisis because of the coronavirus pandemic, chief Peter Maurer said on Saturday.

Iraq faces a humanitarian crisis where more than 1.3 million people are displaced. More than 90 per cent of those have been so for more than three years, according to the ICRC. 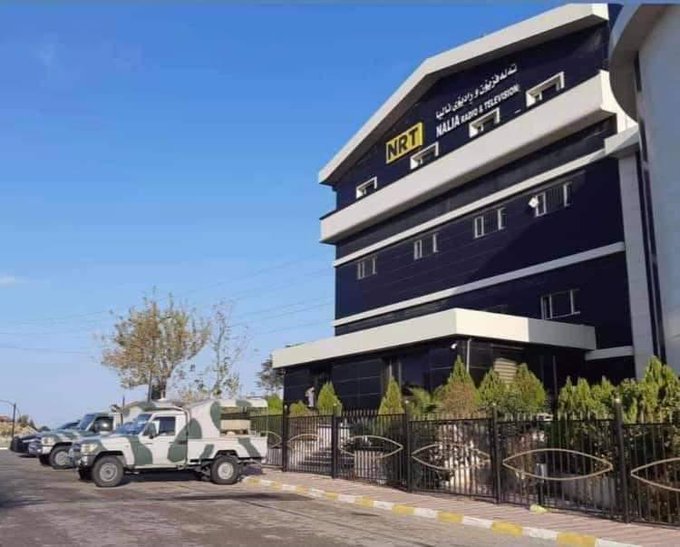 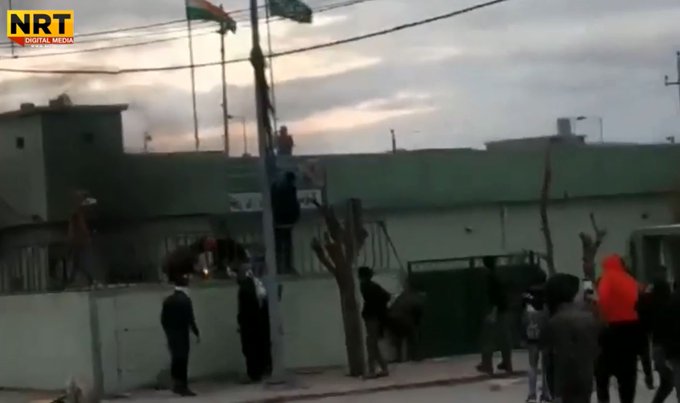 And what happens when you cover the ongoing protests?  Often, they shut you down.  NRT reports:

The security forces in Sulaimani entered NRT’s main headquarters at approximately 2 a.m. on Monday (December 7) and taking the channel’s broadcast off the air.

The security forces, which are affiliated with the Patriotic Union of Kurdistan (PUK), did not immediately present a court order backing up their actions.

NRT has been heavily covering the protests in Sulaimani governorate that began on Wednesday. Demonstrators have been voicing their anger at the Kurdistan Regional Government’s (KRG) handling of deteriorating economic conditions, lack of basic services, and the government’s failure to pay public sector salaries on time and in full.

The channel’s offices in Erbil and Duhok were closed without a court order for two months this autumn after it covered protests in both those governorates.

Sunday was the fifth consecutive day of protest in Suleimaniya.  That's the KRG and, note, protesters are treated no better in the KRG than they are in the rest of Iraq.  Ruba Ali al-Hassani Tweets:

Protests in Bazian, Suleimaniya, today cut off the highway between Suleimaniya and Kirkuk to stop oil transport. #Iraq #Kurdistan

The pandemic is tough.  It should never have been as tough as it has been.  Jimmy Dore explains that in the video below.