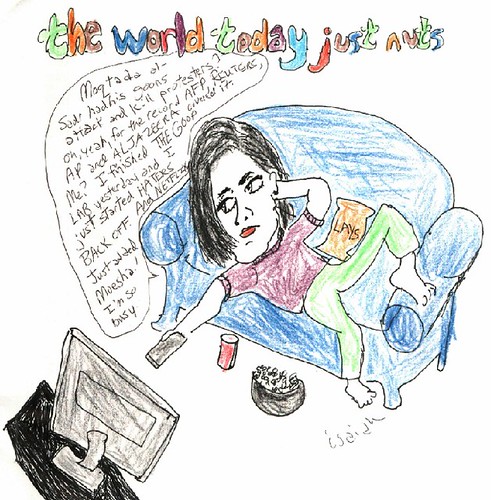 I was in college when President John F. Kennedy was assassinated.  He was someone I really believed in and someone who effected my life.  Impacted both with what he did and with what was done to him.  I am noting another CBC video about his assassination.

Tuesday, December 8, 2020.  More evidence that Team Biden isn't up to the job of creating a new administration comes as more protests rock Iraq.

Tara Reade is an American woman who came forward to explain that she was harassed and assaulted while working for Joe Biden's senate office in the 90s.  Among those she sought out in the last year and a half?  Then-Senator Kamala Harris.  Kamala and Dianne Feinstein were Tara's two US senators.  Were.  Kamala will be sworn in next month as vice president -- barring some unforeseen upset.  (The electoral college votes December 14th.  Once they vote, it's over.)

Tara reached out to Kamala.  Kamala did nothing.  Is that really a surprise?  It may have been to Tara because there's a moment in Kamala's story that's not really known.  It'll be more widely known now.  Cedric's "Kamala Harris part of the work place harassment system" and Wally's "THIS JUST IN! KAMALA HARRIS BUILDING THE #ME TOO MOVEMENT ONE VICTIM AT A TIME!" notes that Joe Biden plans to nominate Xavier Becerra to be Secretary of Health and Human Services.  Xavier has a Kamala connection.  He settled a lawsuit -- paying the survivor $400,000 -- against Larry Wallace.  Wallace has harassed a woman working for Kamala.  Wallace worked for Kamala.  It gets worse.

A longtime top staff member of U.S. Sen. Kamala Harris resigned Wednesday after The Sacramento Bee inquired about a $400,000 harassment and retaliation settlement resulting from his time working for Harris at the California Department of Justice.

Larry Wallace, who served as the director of the Division of Law Enforcement under then-Attorney General Harris, was accused by his former executive assistant in December 2016 of “gender harassment” and other demeaning behavior, including frequently asking her to crawl under his desk to change the paper in his printer.

The lawsuit was filed on Dec. 30, 2016, when Harris was still attorney general but preparing to be sworn in as California’s newly elected Democratic senator. It was settled less than five months later, in May 2017, by Xavier Becerra, who was appointed to replace her as attorney general.

By that time, Wallace had transitioned to work for Harris as a senior advisor in her Sacramento office.

“We were unaware of this issue and take accusations of harassment extremely seriously. This evening, Mr. Wallace offered his resignation to the senator and she accepted it,” Harris spokeswoman Lily Adams wrote in an email.

That's a lie.  There's no way that a $400,000 settlement was reached over someone working under Kamala and she was not (a) aware of the complaint and (b) aware of the settlement.  She knew who he was and she elected to bring him with her as a senate staffer.  Furthermore, she only got ride of him the day the press came sniffing around.

The survivor was Wallace's executive assistant.

When she reported the behavior to a supervisor, the lawsuit says, she was “subjected to retaliation including being set up to fail” as well as being “micro-managed” by a supervisor, and was “placed under an Internal Affairs investigation for a fabricated charge and told she should quit her job and seek employment elsewhere.” She was later involuntarily assigned to a different department.

Kamala lied and she needs to get honest.  The editorial board of THE FRESNO BEE also didn't find her claims convincing:

Attorney General Xavier Becerra settled out of court for $400,000 in May 2017. In 2016, Wallace was the director of the Division of Law Enforcement under then-Attorney General Harris. He has been with Harris for 14 years, stretching back to her time as San Francisco district attorney. Most recently he worked out of Sacramento on her Senate staff.

Wallace resigned last Wednesday. Harris on Thursday said she wasn’t aware of the allegations against him.

There are only a few possible interpretations here, and they are unpleasant. Wallace wasn’t out on the periphery of Harris’ staff; he was a senior aide she knew for 14 years — hardly a stranger. For Harris to flatly deny any knowledge of this settlement seems, shall we say, far-fetched. For the moment, let’s take her at her word.

A second and equally troubling interpretation is that Harris isn’t a terribly good manager, and that her staff was insulating her from information critical to the performance of her duties. This is hardly a propitious beginning to a presidential candidacy.

Harris’ handling of this matter is eerily reminiscent of a 2010 case during her tenure as district attorney, where a judge rebuked her office for hiding problems in the drug analysis section of the San Francisco police crime lab.

Part of being an elected official is not only taking strong political positions and executing them fairly, it’s also being able to manage the people you entrust with responsibility. In this case, Harris has fallen short.

Harris owes the voters more than just a four-word denial on the steps of the U.S. Senate. She should fully explain her relationship with Wallace, and, by extension, her staff and why it insulated her from an issue upon which she has taken a leading national role.

Making it even more obvious that Kamala is lying is the fact that her timeline is fiction.  Emily Kopp (ROLL CALL) noted:

Sen. Kamala Harris, D-Calif., expressed surprise and frustration when reports first surfaced last week that a longtime aide had settled allegations of gender discrimination last year — attributing her lack of awareness to a “breakdown” in communication.

But the California Department of Justice received notification of the suit three months before Harris left her position as state attorney general, according to a new report.

Kamala blew off Tara Reade?  It appears Kamala's been blowing off the harassed for some time.

This goes to the stupidity of Team Biden, by the way.  Joe's accused of rape, he's accused of harassment.  He should be doing everything he can to ensure that his administration sends a strong anti-harassment message.  But he's trying to put Neera Tanden in charge of the OMB.  Neera who was in charge at CAP when women were complaining of being harassed.  She would eventually out one of the women in a company wide meeting.  And, yes, that is awful and it's wrong.  But let's not ignore the fact that she was the manager there and multiple women had complaints and multiple women were ignored.  How can she manage anything when her record demonstrates that she can't even fix a toxic work environment and make it respect the laws of the land?

Now they're nominating Becerra who just raises the issue of how Kamala looked the other way to protect her friend Larry Wallace.

These are the mistakes rookies make.  And Biden's team is experienced so why are they making all these mistakes?  Arrogance.  They don't realize how quickly America can (and will if serious measures are not taken) turn on Joe Biden.

The entire Biden campaign and presidency boil down to "I'm not Trump." For millions of people that's enough. But sooner or later, it will become abundantly clear that nothing has fundamentally changed. At that point, people will realize what the left is saying.
6:51 AM · Dec 8, 2020

Corruption in leadership around the world.  Sofia Barbarani (ALJAZEERA) types:

Iraqi President Barham Salih has called for an end to “corruption, looting, plundering and smuggling” following a sixth day of protests in the Kurdish region of northern Iraq’s Sulaymaniyah province.

Demonstrators have taken to the streets to demonstrate against the political leadership, high unemployment rate and lack of public services.

They also demanded that their salaries be paid in full.

Local media reported that at least six protesters have been killed in the clashes with security forces.

“Violence is not a solution to confront the legitimate demands of citizens,” President Salih said in his statement on Tuesday.

Mr Salih, who is originally from Sulaymaniyah, urged security forces to act according to the law and to refrain from using violence while not putting any restraints on the media.

Young people have lost hope in the Kurdistan Regional Government's leadership and want to take matters into their own hands, Sarkwat Shamis, an Iraqi MP, told The National.

"This is a result of outstanding issues, crisis and the corruption of the ruling clans, the Barzanis and Talabanis," he said, in reference to the two ruling Kurdish political parties.

#Iraq At least 4 protesters were killed and dozens were injured by the #KDP armed forces during mass protests against the economic crisis, corruption & high unemployment in the autonomous Kurdish region of #Sulaymaniyah. The offices of all political parties were set on fire.
7:13 AM · Dec 8, 2020

We've been covering the issues in Sulaymaniyah since Sunday -- that's when the government shut down NRT for covering the protest.  MIDDLE EAST MONITOR notes:

NRT said in a statement on its website that "the Asayish [regional security forces] have stormed the channel's headquarters in the city of Sulaymaniyah, cut off broadcasting, confiscated equipment and closed the building's doors."

According to the statement, the suspension came after the channel's extensive coverage of the recent protests in the region.

The channel published two photos showing a number of security cars parked in front of its headquarters in the city.

The Ministry of Culture and Youth in the Kurdistan Regional Government (KRG) said in a statement that it had decided to suspend the channel's broadcasts for one week because of its "lack of adherence to the rules regulating broadcast media and especially its current irresponsible behaviour, describing the security forces as militias and bandits."

In addition to shutting down NRT, there are rumors that the internet is about to be shut down in that area.  Actually, the shut down of the internet has started.  Dr Nemam Ghafouri Tweets:

Bullets and killing did not silenced people, now they have shut down the internet in Suli region and I can’t communicate with doctors on important issues regarding saving children’s lives who need operation.
3:02 AM · Dec 8, 2020

Apparently, the government killed the internet last night and it came back up this morning.  Kurdish Blogger Tweets: 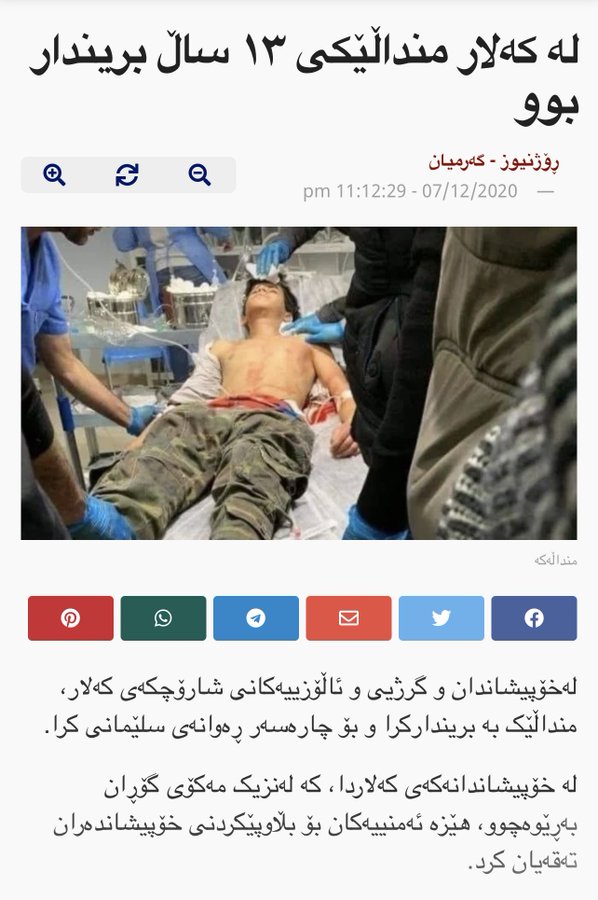 At least four people are said to be dead and multiple others injured as clashes continued between protesters and security forces in Sulaimani on Monday night.

A 26-year-old was confirmed dead on Monday evening after being shot in Chamchamal.

The violence comes after a number of political party offices were targeted in Saidsadiq, southeast of Sulaimani city.

Allegations of Turkish security forces member involvement in the gang rape of a 15-year-old girl in the Kurdish-majority province of Batman has angered many social media users and politicians in Turkey, with the government denying the claims.

Jin news agency, a feminist media outlet, reported on Saturday that a group of 27 people, including police officers, specialized sergeants and village guards were involved in the rape of a 15-year-old girl in Gercus district in Batman.

It added that the rape was brought to light after the girl went to the hospital for abdominal pain and was found to be pregnant.

Hours later, Batman Public Prosecutor’s office said in a statement that a child visited their office on November 12, and reported that “she had been raped and impregnated.”

Police say they were able to detain a suspect on November 13, according to the office, which denied claims that any police officers or state employees were involved in the incident. The statement also noted that a confidentiality order had been placed on the case, prohibiting media from reporting on it.

On Sunday, the Batman governor’s office slammed media agencies and social media accounts reporting that security force members were involved, accusing them of having links to the Kurdistan Workers’ Party (PKK). The statement added that investigations will be launched against anyone “who publishes fake news.”