50 years old and the useless little baby still tries to trade on Daddy to get a job.


He cannot get a job because he is a drug addict and no one believes he's been 'cured' (let alone treated) this go round.  Lazy, spoiled middle-aged brat.

RicZar‏ @bullitt4248 1h1 hour ago
Unless his hair is on fire, he needs to be in Arkansas.' Deadbeat Dad Hunter Biden's bid to delay his deposition in child support case is rejected by judge as 'unemployed' VP's son reveals his new painting hobby
0 replies0 retweets0 likes

He keeps dodging the court but has all the time in the world to talk to the press, Deadbeat Dad Hunter Biden.

ADDED: In Texas, the Democratic Party actively worked to reduce the youth and Latino vote.  This was true at UT Austin, this was true in Dallas, Tyler and everywhere including smaller areas like Lindale.  They targeted voting groups that they assumed would be Bernie Sanders supporters.  These areas were understaffed -- intentionally -- and did not have enough voting machines -- intentionally -- in attempt to create long lines and lengthy waiting time in the hopes that people would leave without voting.  Which did happen.  USA TODAY has a ridiculous article claiming that Bernie's youth supporters just stayed home.  That's not what happened in Texas.  I'd be curious to know if this was replicated elsewhere in other states.  I learned about this from e-mails from Texas community members and I then made calls to friends with the Democratic Party in Texas.  This was not an accident.

Go to end of this snapshot for more.

Super Tuesday came and went.   One thing to note, March 15th, CNN hosts the next debate. The stage will no longer be crowded with so many already having dropped out.  Point?  US House Rep and Iraq War veteran Tulsi Gabbard has 1 delegate.  She remains in the race.  There's no reason to keep her off the stage.  The race is now: Tulsi, Michael Bloomberg, Elizabeth Warren, Joe Biden and Bernie Sanders.  Michael Bloomberg has 18 delegates and he will be on the stage.

Bloomberg has spent over $500 million and that's what he has to show for it -- 18 delegates so far.  Tulsi has not even spent a million and she's got one delegate.  Unless she drops out before March 15th, she should be on the stage at the CNN debate.  That's basic fairness and she's earned her spot.  The DNC was more than happy to break the rules to let Bloomberg on the stage.  They should have the decency to allow Tulsi on the stage.

I am not a Tulsi supporter.  I'm also not a Joe Biden supporter and I'm aware that Tulsi on stage likely means Tulsi making excuses for Joe -- as she did in the debate that took place at the end of July.  There is no benefit for the candidate I'm supporting (Bernie Sanders) for Tulsi to appear on the stage.

But this is about democracy with the little "d" and about the people's right to be informed.  Tulsi deserves to be on the stage.

NBC has Joe Biden in the delegate lead after last night with 453.  Amy Klobuchar is out the race and has endorsed Joe.  You can pretty much toss her 7 votes in with Joe's for his total of 460 and Tiny Pete has dropped out and also endorsed Joe so you can add his 26 to that for a total of 486.  Bernie has 373 and Elizabeth Warren has 39.    Some have been insisting Elizabeth staying in the race is hurting Bernie.  With 39, that's not really hurting him.  He would be closer to Joe if he had her votes but he wouldn't be ahead of Joe.  And Elizabeth voters would not necessarily go with Bernie.

I don't see a path to victory for her and I don't know why anyone's steal donating to the campaign.  In 2008, you could argue that Hillary had a shot even after the press said she didn't.  It made sense for her to stay in the race if that's what she wanted.

If Elizabeth wants to stay in the race, she should.  But her delegate count is not anywhere near what Hillary had in 2008 and there's no path to victory unless she's thinking that the battle between Joe and Bernie supporters will be so intense at the convention that the DNC will go with a compromise candidate.  Were that to happen, the compromise candidate would be off to a bad start -- whether it was Elizabeth or anyone else -- because the two most popular candidates were being sidelined to go with someone that the public really didn't seem to want.

If we had rank choice voting, things might be different for Elizabeth.  We don't have it, though.  We should, but we don't.

Impressive victory yesterday for the liberal oligarchy! Big congrats to their corporate media for demonstrating the power of redbaiting and fearmongering. Hats off to Obama, Hillary, Liz, Pete, Amy - nice inside/outside game. #VoteBlueNoMatterWho They Screw! #AnybodyButBernie
0 replies1 retweet1 like


Oh, John, let's not leave at the corporate media.  Let's include people like Cher.

Cher wouldn't have an Academy Award were it not for who?  Jeff Corey.  Why did Corey become an acting teacher?  Because the red-baiting blacklist of the McCarthy era destroyed his acting career.  No one would hire him.  So he became a teacher and he taught people like Cher and Jack Nicholson and Jane Fonda and many more.

Cher pays it forward in 2020 by?  By red-baiting Bernie Sanders.

What a proud moment for the always reactionary Cher.  Actions -- even reactionary ones -- have consequences.  I think your smooth easy ride since "Believe" is now over.  You've awakened hatered and you will suffer because of it.  That's not me, I'm not pleased with what Cher but I still like her as a person.  But we live today in a cancel culture and Cher will feel the bark and the bite of that.  Sorry, it's called karma. 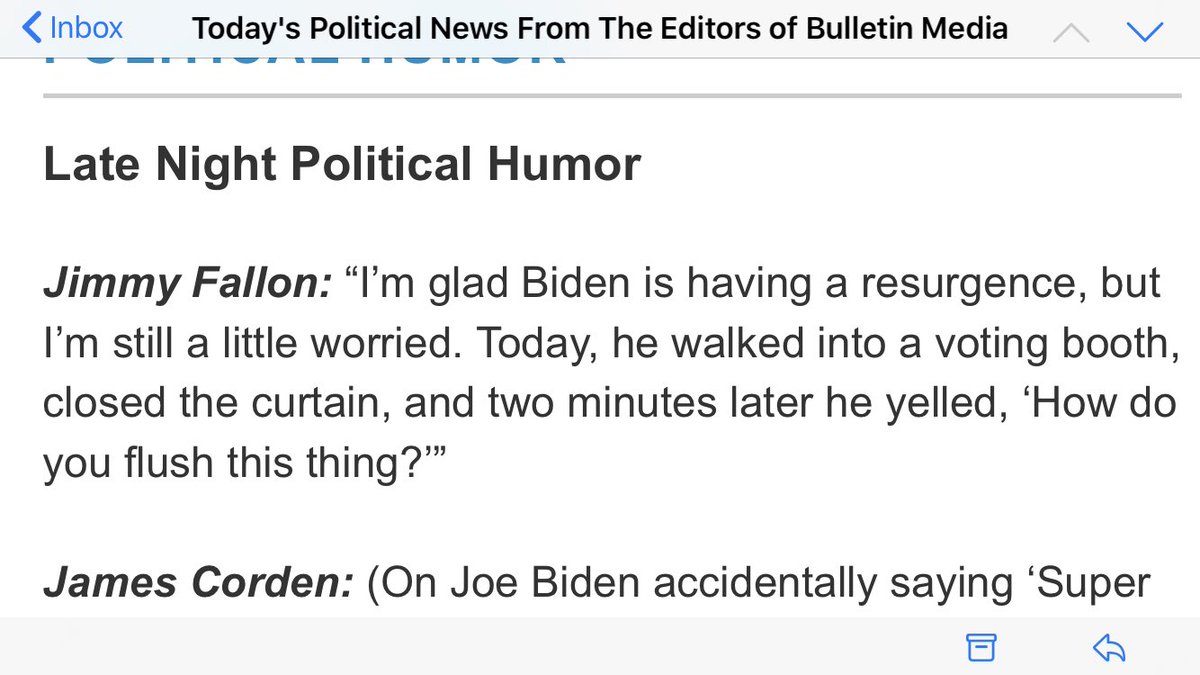 
Joe is in the lead and a lot of liars and losers put him there.  Last night, in his speech, he confused his wife with his own sister.  That wasn't funny and it wasn't cute.  It's a sign that the mind is gone.  It's a sign of how confused he is.  Yes, many believe Ronald Regan suffered similarly in his second term.  That didn't make it right.  Joe's not fit for the job.

In the last debate, Amy had the floor and was talking about a bill she passed and Joe Biden jumped in to insist that he passed that bill.

Amy politely corrected him and then, when he continued to insist that he had passed it, she said they'd leave it up to the fact checkers.

That won't be Donald on stage or after.

And the after is really important.

No, they were not both right.

Amy was right.  She had the floor and was talking about the bill she put forward.  Joe cut her off and started talking about a different bill from long ago.

Liars in the media tried to say, they're both right, they were talking about different bills.

No, Amy was right.

Amy was talking about her bill, had identified the elements of it and Joe interrupted to bring up his bill which was not the same.  Joe was wrong.

The corporate media's refusal to be accurate on something so basic will not happen with Donald Trump.  If he is right (or thinks he is), he's not going to let it blow over the way Amy did.  He's not going to be nice.

If Joe manages to win or steal the nomination, we will likely see four more years of Donald Trump and, if that is the case, the DNC and Joe's supporters better ready for the fall out.


Joe campaigns on the past and offers nothing for the future.

David Sirota Retweeted Ernest Lee Luning
Joe Biden has promised his billionaire donors that if he wins the Democratic primary, he will make sure that “nothing would fundamentally change” for them. That is absolutely unacceptable.
David Sirota added,


Bernie is the clear choice for those focused on the present and the future.

While there is still much counting of votes to be done before the overall outcome of Super Tuesday is fully calculated and understood, the key takeaway from the Democratic Party's largest single-day of voting thus far—with 14 states up for grabs, including Texas and California—is that what was once the largest presidential field of candidates in living memory is now down to just two: Sen. Bernie Sanders and former Vice President Joe Biden.
As of this writing, Biden—whose campaign was considered all but dead last week but enjoyed a great night for his campaign by steamrolling in the South and nabbing at least two upsets from Sanders—was able to claim victory in eight states: Virginia, North Carolina, Massachusetts, Tennessee, Minnesota, Alabama, Arkansas, and Oklahoma.

Meanwhile, news outlets called the biggest prize of the night, California, for Sanders, who also won in Colorado, Utah, and Vermont.

The corporate press is lost as usual.  Many are still on the Bernie has a memo about the differences between him and Joe!

The upcoming story?  As a friend on the Bloomberg campaign told me, *supporters* are making clear to Michael Bloomberg that he must destroy at the next debate or drop out -- and by destroy, they're not worried about Bernie.  They want him to go after Joe.

“This is a fight for Iraq, not for politicians.” Sharp reporting on Iraqi street protests from ⁦@leloveluck⁩ & ⁦@Mustafa_salimb⁩ washingtonpost.com/world/middle_e…
0 replies0 retweets1 like


Yes, the protests continue in Iraq.


"The use of innovative nonviolent tactics as well as strong participation by female organizers and protesters is a testament to the rupture with past uprisings in Iraq..." nonviolent-conflict.org/blog_post/from… #IraqProtests #civilresistance
0 replies1 retweet1 like

Iraqi forces again fired hunting guns at demonstrators in Khalani Square today. Tear gas was different from what a normal tear gas should be. Many people collapsing unable to breathe. #iraqprotests #Baghdadprotests #Baghdad
0 replies1 retweet1 like

Thank you for your reactionary take, Canadian asshole Paul Cogan.  No one needs you, stick your nose back into your own damn country.  The GOP had little concern with the Democratic Party in Texas.  It's a 'red' state.  In a general election, Paul Cogan's b.s. might make sense.  In a primary, no.

KT‏ @prol_veg 2m2 minutes ago
Replying to @TwinklingTania @bjdmy3sons @StefWilliams25
i know people who were planning on voting bernie in texas that had to leave the line to go pick up kids from daycare or go to work. 4-7 hour wait times is nothing short of voter suppression. cant believe its even an argument.
0 replies0 retweets0 likes


KT is correct, it's voter suppression.

Propertunist‏ @RogueMorose 10m10 minutes ago
Replying to @pikespeakcolor @MariaArriola4 and
You just watched the Democrat party practice voter suppression in Texas and California. And you're sitting here bitching about Republicans. You don't know what you're talking about.
0 replies0 retweets0 likes


It must be nice that so many stupid people are around to insist that, in a primary, the GOP focus was suppressing the Democratic outcome.  This wasn't a general elecction.  Propertunist is correct, the Democratic Party practiced voter suppression in Texas (I would assume in California as well but I haven't spoken yet to anyone there about it).

And notice that Eddie Bernice Johnson, Sheila Lee and assorted others did nothing to draw attention to this as it was taking place.