So many questions about the conspiracy


Isaiah's THE WORLD TODAY JUST NUTS "Next Round of Debates" 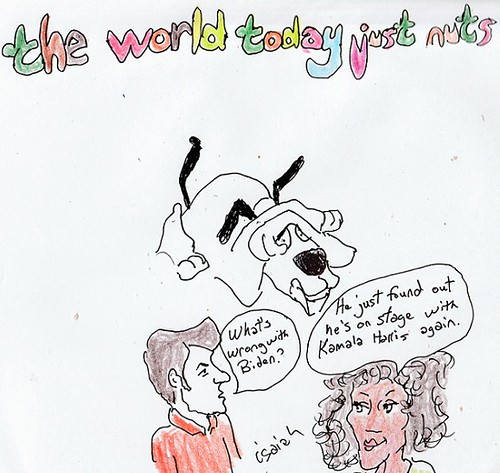 Moving over to Russiagate, more problems for James Comey.

And there is more.


There are so many questions that need answers.


Next week, the Democratic Party holds their second round of debates for their presidential candidates (on July 30th and July 31st).  Right now, one of the 20 who made the cut seems determined to embarrass himself.

Yes, we're talking about War Hawk Joe.  Status quo Joe.  He voted for the Iraq War.  He sold the Iraq War before and after it started.  He wants to talk about Iraq . . . provided he can start the conversation after he's Vice President (2009) and end it at the end of 2011.  Salvador Rizzo (WASHINGTON POST) fact checks Joe on his Iraq withdrawal claims and comments:


Although Bush set the 2011 withdrawal time frame, the Obama administration had to figure out the logistics and details, and much of that work fell to Biden and his committee. The drawdown proceeded in phases, with U.S. forces dropping from 150,000 to 50,000 to almost zero during Obama’s first term.


However, the United States kept several thousand military contractors in Iraq throughout this time and after 2011. And although Obama promised to end the Iraq War as a candidate, there were bumps along the road that complicate Biden’s neatly wrapped-up story.
Before withdrawing forces in 2011, Obama’s administration tried to persuade Iraqi political leaders to allow a residual force of about 3,500 U.S. troops to remain. Some high-level officials in the Obama administration argued that a total withdrawal would open up a power vacuum in Iraq and erase the gains secured by U.S. forces and international allies.
“It was clear to me — and many others — that withdrawing all our forces would endanger the fragile stability then barely holding Iraq together,” Leon Panetta, who was Obama’s CIA director from 2009 to 2011 and defense secretary from 2011 to 2013, wrote in his memoir, “Worthy Fights.”


In 2011, the United States was seeking legal immunity for U.S. troops as part of an agreement for a continued military presence in Iraq. But there was no support in the Iraqi parliament for that, Biden’s advisers said.
[. . .]
Biden had a big hand in withdrawing U.S. forces from Iraq during Obama’s first term. It was a sensitive role and one Biden relished, by many accounts. But he was still the vice president during Obama’s second term, when thousands of U.S. troops returned to the country. It’s puzzling to see him leave that out of his remarks on the campaign trail and in the debate.
The Biden camp argues that these are two very different conflicts and that the troop levels were much higher pre-2011 and much lower post-2014. However, as top Obama administration officials have said in public, the two conflicts are inextricably linked. The Islamic State gained a foothold in Iraq in large part because U.S. forces had withdrawn.
Biden told half the story, so he gets Two Pinocchios.

Replying to @agentcurieuse @JohnEarlBurnett @JoeBiden
Gotta love centrist dems. You literally attack Bernie unprovoked and when you get the slightest push back on your BS you compare ppl to trump lol. Also whats bidens best legislation? Locking up black ppl? Voting against bussing? Voting for the Iraq war or siding with CC companies
0 replies0 retweets0 likes

The press told you Joe Biden was inevitable and unbeatable.  Now he's double digit lead is over and, in some polls. he ahead of Senator Elizabeth Warren by 6% or less.  And it's only July.  Meaning?  Joe will tank further when the fall semester begins.  Joe has no youth support.  It's like a Young Republican circa 1968, they really don't exist and the few that are around tend to be pointed to and giggled over.

Joe is the past.  He offers no vision of the future.  He promises you he'll bring back the Obama Era -- the one that refused to do what was needed on climate change?  I saw that ridiculous interview with that woman who can no longer sing.  She spends 80% of her days in denial, she said, and 20% trying to do something.  And she thinks young people should lead because they know how serious the threat to the environment is.

That would be the same threat that existed in 2008.  And the singer -- who still had a voice then -- couldn't call out the inaction on climate change from 2009 through the start of 2017.  I'm remembering what Mick Jagger called the woman's autobiography -- AND A C**T TO SING WITH -- and starting to really grasp why.

That's the hypocrisy the youth will have to push past.  And it doesn't help Joe Biden.

The reality is that Barack had eight years to do something serious about climate change and he offered meaningless and symbolic actions only.

Joe may have the luxury of returning to that era but neither the US nor the world has that luxury.

Joe normalized the Iraqi government.  Is anyone going to question him on that?

This would be the same government that still can't get it together.  Human Rights Watch notes today:

Iraqi authorities have failed to ensure for almost 30 years that Basra residents have sufficient safe drinking water, resulting in on-going health concerns, Human Rights Watch said in a report released today. The situation culminated in an acute water crisis that sent at least 118,000 people to hospital in 2018 and led to violent protests.
The 128-page report, “Basra is Thirsty: Iraq’s Failure to Manage the Water Crisis,” found that the crisis is a result of complex factors that if left unaddressed will most likely result in future water-borne disease outbreaks and continued economic hardship. The authorities at the local and federal level have done little to address the underlying conditions causing the situation.
“Shortsighted politicians are citing increased rainfall as the reason they do not need to urgently deal with Basra’s persistent crisis,” said Lama Fakih, acting Middle East director at Human Rights Watch. “But Basra will continue to face acute water shortages and pollution crises in the coming years, with serious consequences, if the government doesn’t invest now in targeted, long-term, and badly needed improvements.”
Human Rights Watch interviewed 58 Basra residents, workers at private and public water facilities, and healthcare professionals, and reviewed water sample tests from the Shatt al-Arab river, treatment plants, and taps in homes. Human Rights Watch also interviewed representatives from Basra’s provincial council, governor’s office, and the Ministries of Water Resources, Municipalities and Public Works’ water and sewage departments, Health and Environment, and Agriculture, and analyzed academic and public health data and over 20 years of scientific and commercial satellite imagery of the region to substantiate many of the findings.
Basra’s primary water sources are the Shatt al-Arab river and its freshwater canals. Human Rights Watch found that Iraqi authorities have failed to properly manage and regulate Iraq’s water resources, depriving people in southern Iraq’s Basra governorate – four million people – of their right to safe drinking water for decades, including during the period of occupation by the US- and UK-led Coalition Provisional Authority. But multiple government failures since the 1980s, including poor management of upstream water sources, inadequate regulation of pollution and sewage, and chronic neglect and mismanagement of water infrastructure, have caused the quality of these waterways to deteriorate.

To cope with water pollution and shortages, Basra residents have had to rely on purchasing water. The high cost, especially during the crisis, falls hardest on poorer residents, and makes them particularly vulnerable to exposure to unsafe tap water.


There is no progress in Iraq.  ISIS is back on the rise as well.


Joe Biden is a part of that history.  He is not the path to a future the US needs -- or one that the world can afford.


Isaiah's THE WORLD TODAY JUST NUTS "Next Round of Debates" went up yesterday.  New content at THIRD: