I did not pay much attention to them when their father was in the White House so I had to ask my granddaughter Tracey, "Is it Titsie or Mustache?"  Titsie had a mother who refused to put her in a bra even when she was wearing tight t-shirts.  Mustache looked like Baby Wanda Sykes but with a mustache.

Tracey explained that it was Titsie's birthday.
This is C.I.'s "Iraq snapshot:"

Wednesday, July 3, 2019.  Joe Biden continues to struggle, Turkey continues to terrorize the Iraqi people, women continue to suffer in Iraq, and much more.


War Hawk Joe Biden was supposed to be moonwalking to the Democratic Party's presidential nomination right about now.  Instead, he's barely standing.  One debate was all it took to remind America of just how ineffectual and disappointing Joe can be.  In one debate, Senator Kamala Harris raised her profile and lowered Joe's.  In one debate.  Can you imagine how poorly Joe would do in the general if the DNC gifted him the nomination?

It's been one gaffe after another and it's not even a full 3 months of Joe as a declared candidate.  Those gaffes?  They'd be present in a general election as well.  Joe doesn't learn.  That's the reality.  He can't stop sniffing women, stop invading their space.  He's called out on it and he makes jokes about it.  He can't learn.  He can't stop making gaffes.  The last weeks is what we can expect in a general election.

His campaign staff begged him to stop praising segregationists.  Or at least stop mentioning them.  We know how that ended -- with him demanding Senator Cory Booker apologize to him for being offended by Joe's remarks.  How is this going to play in a general election?

And two more things to remember.  Joe gets weepy.  The press largely looked the other way in 2008 when Joe cried on stage.  He wasn't the top of the ticket so they could look the other way.  But if Joe starts weeping as a presidential candidate in the general, what happens?  Questions about his mental stability?  Mocking?  Both?  More?

Second thing to remember, all these gaffes?  They've been made while the campaign has kept Joe away from the voters, away from reporters.  He's on a very limited public schedule because the campaign knows they have to control him to limit gaffes.  How do you run that kind of schedule in a general election?

If you want to defeat Donald Trump, you need a candidate who is strong and can be out in public.  Joe is not that candidate.  Kamala might be the one.  Or Bernie, or Tulsi, or Elizabeth, or Kirsten, or Marianne, or Beto, or Cory, or Eric, or . . .

There are choices.  And now is the time to seriously consider them.


Joe's campaign can't put Joe forward so they're using surrogates to try to prop him.  Idiots like Ned Lamont.

Ned Lamont‏Verified account @NedLamont
When my campaign needed a final push last fall, @JoeBiden was there. I’ve gotten to know him more over the years and now, I’m grateful that he’s thrown his hat in the ring to run against President Trump. 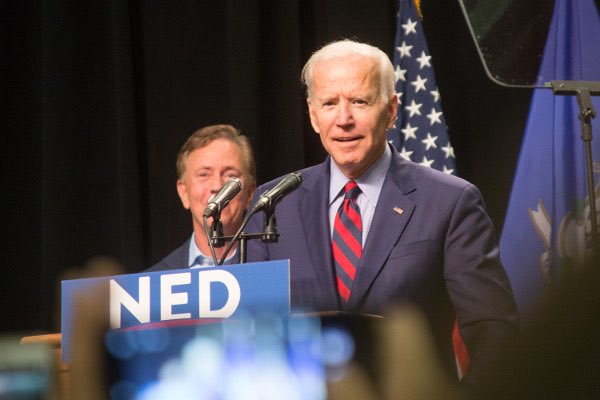 As Democrats, we are fortunate to have such an impressive field. The strength of our candidates is good for our democracy and for us as a nation. Joe has spent his entire life fighting for hard working American families. That’s the kind of President we need now more than ever.
45 replies32 retweets95 likes

Is it? I don't know Lamont. Is he popular? Progressive? Like any good at all?
1 reply0 retweets1 like

Connecticut is owned by insurance companies. Not very surprising on one hand that CT's Gov. would endorse the establishment candidate. But Lamont sounded progressive a long time ago when he primaried Lieberman. In part because he was anti-war. Now he picks Iraq war Joe.
1 reply1 retweet6 likes

Thanks for the info!
0 replies0 retweets2 likes

I'm not seeing a lot of difference between Joe Lieberman and Joe Biden.  Ned apparently does.  For those who don't remember, Ned challenged Senator Joe Lieberman in the 2006 primaries.  And Ned won.  He ran a strong campaign.  Then he allowed the outsiders to invade his campaign and they ran a cautious general election campaign allowing Joe to win (Joe ran as an independent).

They can't even whore smartly.

If Joe had shown any indication that he can learn from his mistakes, he might not be doing so poorly but he repeatedly offends people with his actions and his remarks and he cant offer a serious apology and he can't change the behavior.  He mocks the women who were brave enough to share their stories.  He demands Cory Booker, an African-American man, apologize to him because Cory is offended by Joe's praise and warm feelings for segregationists.

Joe is the old dog who will learn no new tricks.  He's making himself a joke and I'm surprised Barack Obama's crew isn't calling for Joe to drop out because, every day he campaigns, he does more damage to the Obama legacy.

A military jury acquitted a decorated Navy SEAL of premeditated murder Tuesday in the killing of a wounded Islamic State captive under his care in Iraq in 2017.
Special Operations Chief Edward Gallagher was cleared of all charges except for posing for photos with the dead body of the captive in a verdict that is a major blow to military prosecutors.


The jurors ignored the testimony of a dozen of officers in Gallagher's Alpha Platoon, SEAL Team 7, who said he had shot at least two civilians from a sniper perch, among other crimes.
Some of the platoon members who testified against Gallagher were called traitors and threatened with violence in a secret Facebook group, according to the New York Times.
In court, some said they had started carrying weapons to defend themselves against possible attacks.
To sway the the jury of five Marines and two sailors, including a SEAL, Gallagher’s defense team claimed those officers were jealous of 19-year veteran Gallagher on his 8th deployment and disliked his demanding style of command.

The prosecution's remarks that Gallagher’s own text messages and photos incriminated him fell on deaf ears. They included photos of Gallagher holding the dead militant teen up by the hair and clutching a knife in his other hand.

Though cleared of the larger charges, he was convicted of one charge.  AP explains, "The same military jurors who acquitted a decorated Navy SEAL of murder in the killing of a wounded Islamic State captive under his care in Iraq in 2017 will return to court Wednesday to decide whether he should serve any jail time for the single charge he was convicted of: posing with the 17-year-old militant’s corpse."

Meanwhile Mohammed Ebraheem (IRAQI NEWS) reports, "An Iraqi woman was killed Wednesday in tribal clashes in al Qadisiyyah governorate, a security source was quoted as saying."  Women have suffered throughout the Iraq War.  One way they have suffered has been in sex trafficking though few in the media have bothered to report on that.  (OFF OUR BACKS, in one of its last issues, did report on it.  Ms. never bothered to report on it.)  Arwa Damon, Ghazi Balkiz, Brice Laine and Aqeel Najm (CNN) report on the topic today:


Nadia tried to run away, but each time her captors caught and beat her. One time they attacked her so brutally that she had internal bleeding and was taken to the hospital. She heard doctors talking about how they had to save her organs.
In the hospital room, Nadia said the head of the gang would sit at her bedside, stroking her hair and calling her his daughter. He told the medical staff that she had a mental illness and had fallen down the stairs.
When Nadia was released from hospital, she said another woman -- another victim of the gang -- was brought in to keep watch over her. Nadia begged the woman to let her go, but the woman just laughed.
The woman lifted her shirt, revealing a scar on her stomach she said she got when they stole one of her kidneys. "'This is what they did to me. I had two little children and they sold them,'" she told Nadia, before adding: "'you will be forced to stay with them, you will get used to this, all that is happening to you.'"
After months of abuse, just when Nadia thought her life would end, she was rescued. She said she wasn't sure who the men were that saved her, but they took her to a hotel run by a Yazidi and she was ultimately reconnected with her family.

As we stated, even before the OFF OUR BACKS report, a thriving business of exploiting women was taking place alongside the war and, as we noted then, the Go Go Boys of the Press were utilizing that business.  For those late to the party, US male press members were happy to stay in Baghdad and use exploited women.  And when women in the US press would find out and voice objection, they would find themselves reassigned, demoted or fired.  They were 'spoil sports.'  They were 'dangerous.'  What if the wives of these men found out!!!!!  They should find out and several did.  There's a reason so many marriages ended.  One of the most high profile break ups, in a GOOGLE search, links to this site and I never mentioned the now ex-wife here -- and when people e-mail asking about that, I instruct Martha and Shirley not to reply to those e-mails.  (I never mentioned her then-husband by name as an exploiter of women -- we did call him out on many, many other things.)


The Turkish air force bombed areas around the city of Sulaimaniyah in Iraqi Kurdistan on June 29, killing four and injuring four others. The Iraqi Foreign Ministry condemned the incident, demanding that Turkey stop bombing Iraqi territory.
In another incident, Turkish fighter jets on late June 27 targeted two civilian cars on Kurtak road at the foot of the Qandil Mountains in Iraqi Kurdistan, killing three persons from one family and wounding five civilians from another family, including children. Ankara’s reasoning for the strikes is to target the Kurdistan Workers Party (PKK) in the area.
[. . .]
Bakr Baiz, the mayor of the town of Qaladze, 136 kilometers (85 miles) northwest of Sulaimaniyah, told Al-Monitor, “The Turkish fighter jets bombarded two civilian cars on Kurtak road, which connects Choman, Soran and Raniya districts; consequently three members of one family — a father a daughter and a son — were killed inside a minibus. Five other civilians from another family were injured inside the second car.”
“This is the third time in recent years that Turkish jets have massacred entire members of a family, as they are either targeting cars or civilian houses,” the mayor added.
He emphasized that the PKK fighters neither have activities in the area targeted by Turkish jets — as the area has no shared border with Turkey — nor any direct clashes with the Turkish army.
He said those killed were Abbulla Ali Mina, 53, his daughter Kurdistan Abdullah, 30, and his son Haryad Abdullah, 21.