Eli Lake (BLOOMBERG NEWS) weighs in on the implosion of the Russia hoax and notes:
Finally, there is that handful of former officials who validated the worst fears of Americans about Trump without ever providing actual evidence. The best example is former CIA Director John Brennan. For the last two years,Brennan has been a frequent guest on cable TV to spread the innuendo that Trump is compromised by Russia. Just this month, he speculated that Mueller would be indicting members of Trump world for criminal conspiracy, even as he insisted he had no “inside knowledge” of Mueller’s deliberations. That last part, at least, turns out to have been true.

I think that is a very accurate point.  I think a lot needs to be addressed following this nonsense.  Two years of time wasted.  Two years of 'reporting' being nothing but rumors -- which turned out to be false.  Two years where we should have focused on reality and pressed for issues Americans need addressed: jobs, Medicare For All, reinvesting in our public institutions -- schools and libraries.

And John Brennan, well known liar, was misleading the country over and over.  Now?  He is trying to pretend otherwise.  Douglas Ernst (WASHINGTON EXAMINER) reports:

One of the president’s harshest critics had a muted tone on Monday as he discussed special counsel Robert Mueller’s Russia report on MSNBC’s “Morning Joe.” No evidence was found to support the claim that Mr. Trump’s 2016 presidential campaign “conspired or coordinated” with Russia.
“Well, I don’t know if I received bad information but I think I suspected there was more than there actually was,”Mr. Brennan told host Joe Scarborough. “I am relieved that it’s been determined there was not a criminal conspiracy with the Russian government over our election.”
Mr. Brennan said in December 2018, for instance, that Mr. Trump should prepare for the “forthcoming exposure of your malfeasance & corruption.”
“We need an actual leader — our Nation’s future is at stake,” he tweeted Dec. 31.

Tuesday, March 26, 2019.  The tragedy of the ferry is far from the only problem facing northern Iraq (bridges, the dam issue, etc) and don't whine about 'disengagement' if you can't get honest about the fact that the US has no ambassador to Iraq currently.

Mohammed Jasim Awad.  A name that should be known wider than any of the puppets the US government has put in charge of Iraq.  Natash Ghoneim (AL JAZEERA) reports on him in the video below.

Last week's tragedy with the ferry found the 24-year-old Mohammed volunteering to help with the rescue efforts and managed to retrieve eight bodies.  Moahmmed was one of the two volunteers who drowned.

KirkukNow‏ @Kirkuknow_DT 2h2 hours ago
What caused the Mosul ferry to capsize? KirkukNow reveals more about the Mosul disaster. Click on this link: kirkuknow.com/en/news/30274 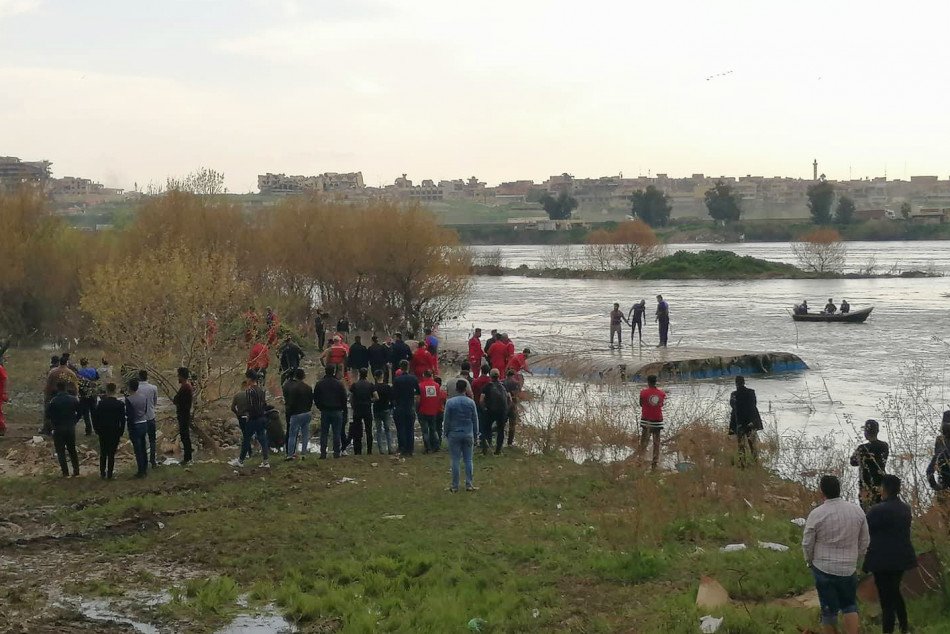 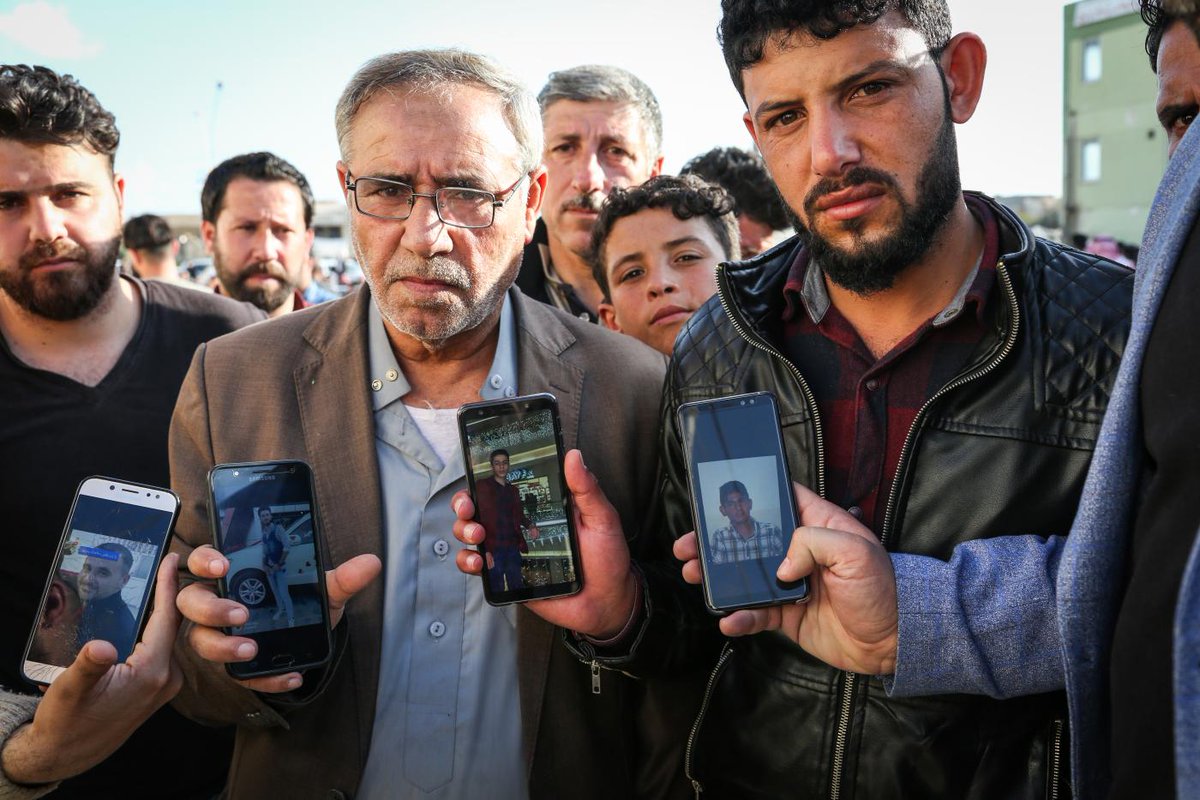 mosul-film‏ @FilmMosul 2h2 hours ago
"The governor and all corrupt officials must be put on trial ... We are fed up of being mistreated and marginalized," said protester Isra Mohammed. #Mosul
0 replies0 retweets1 like

Mosul had the ferry disaster last week.  For years, they've needed to address problems with the dam.  Actual leadership might have allowed that to be addressed.

IBBC‏ @IBBC_London 3h3 hours ago
German Government is prepared to provide Export Credit Finance for the rehabilitation of #Mosul Dam #Iraq. Delegates at the Iraqi-German Business Forum are told that a permanent solution to the dams problems has been found and waits to be implemented.
0 replies0 retweets2 likes


There's a new problem emerging in the north.  RUDAW reports:

Flash flooding has further weakened a temporary bridge over the Little Zab River which separates federal Iraq from the semi-autonomous Kurdistan Region, leading to fears it could collapse at any moment.

The steel bridge was only recently built to replace the original structure destroyed in fighting between Iraqi forces and the Peshmerga in October 2017.

Damage caused by heavy freight traffic has been further exacerbated by the torrent of water passing under the bridge as flash flooding swells the Little Zab.

Heavy rains have caused serious damage to farms, homes, and infrastructure across the Kurdistan Region and Iraq.

That's far from the only bridge issue in Iraq these days. 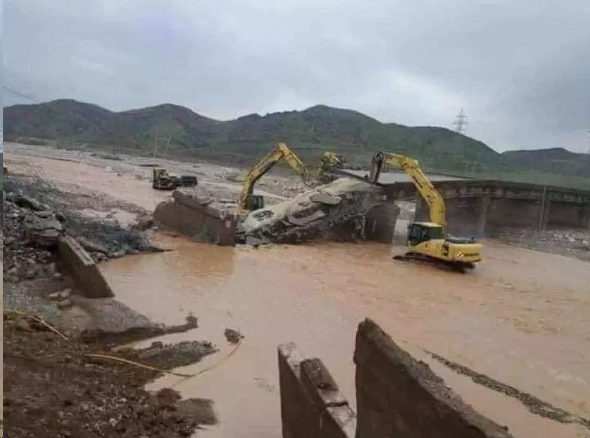 #Ninewa: Heavy rains cause floods, close schools. Several neighborhoods have been affected by heavy rains in Mosul, and the DoE announced a day-off for schools. #Qayyarah Bridge has been closed for vehicular usage. Reportedly, none of the #IDP camps have been affected
1 reply1 retweet1 like

OCHA Iraq‏Verified account @OCHAIraq
#Kirkuk: All Kirkuk districts reported heavy rains since 23 March. No flooding/ damage have been reported so far. However, there is concern that a bridge in Hawiga may collapse any time. Civil defense forces are responding.
2:39 AM - 25 Mar 2019
1 reply0 retweets0 likes

#Sulaymaniyah: Sulaymaniyah experienced heavy rains since 24 -25 March. No flooding or damages reported so far; #IDP camps have not been affected by the rain. #Kalar district concerned that #Diyala river could burst its bank any time. Civil defense forces are responding.
1 reply0 retweets0 likes

#Wasit: the Governor announced alert re expected floods induced by the recent heavy downpours. In this connection, the Governor ordered evacuation of some villages to avoid civilian casualties.
1 reply1 retweet0 likes

#Basra: reportedly 20 families have been evacuated from Al-Hwaidi in Qurna District due to floods. Other areas in Basra affected by the floods include Al-Seeba and Al-Faw Districts, south of Basra. JCMC and Basra crisis cell are meeting today to evaluate the situation
1 reply1 retweet3 likes


These issues go unaddressed because Iraq has a government led by thieves more concerned with how much money they can steal than how to help the Iraqi people.  The corruption is bred into the puppet system.

Alia Barhimi is a self-styled 'expert' and, at THE GUARDIAN, she offers what she thinks passes for 'expertise' today:

It is unlikely Iraq will turn the page on its recent history of toxic sectarianism, as the leaders of notorious Shia security forces such as Asa’ib Ahl al-Haq and the Badr Organisation are now embedded in the parliamentary system. Baghdad is also pushed further towards the embrace of Iran by Trump’s disengagement from the region, as symbolised by President Rouhani’s tour of Iraq this month.

Is Donald Trump disengaging from the region?  We're talking Iraq.

Donald Trump nominated a US ambassador to Iraq back in November of last year (Matthew Tueller).  At the start of this month, the Senate Foreign Relations Committee finally held a hearing.  They have still not voted on the nomination.  The US has no ambassador in Iraq currently.


It's about to be April and there's still no US Ambassador to Iraq.

Is that not clear enough for Alia?  That's not Donald Trump dragging feet or 'disengaging.'  That's the US Senate.  And this has been going on for months.

Human filth like Alia Barhimi know they can whine about Trump to the equally uninformed.  She doesn't have to write anything original or of value or even factual.  And this is passed off as 'insight.'  She argues for continued war, that is all she ever argues for.  Human filth.

So while Iraq was freed of its portion of the caliphate over a year ago, it remains under the control of a dysfunctional, corrupt state, its quasi-legitimacy derived as much from the extensive network of Shia patronage and ‘jobs for boys’ it provides, as from the painfully inconclusive elections it holds – elections, it is worth noting, in which few Iraqis now vote. It means the Iraqi state, hand in hand with its Iranian backers, benefits a section of Iraq’s Shia majority while disenfranchising the Sunni minority. So a state-linked, often state-employed, section of Iraqi society, with assorted militias protecting its interests, enjoys the benefits of Iraq’s still substantial oil revenues, while vast swathes of largely Sunni Iraq subsist amid a failing infrastructure.
Even now, over 15 years since the US-led invasion devastated the nation, water and electricity supplies, especially in southern Iraq, can be intermittent. ISIS didn’t come from nowhere; it came from here, from a fractured post-Baathist, post-2003 Iraq. And there is every reason to think that the substantial, ethnically inflected grievances that gave it a foothold in local populations, can do so again.