Governor candidate, NY
Howie Hawkins Retweeted CBS New York
Since you have failed to return the phone call from my attorney, I want to put you on notice that as the Green Party candidate for Governor I demand equal time with respect to airing a debate today that you sponsored that included 2 of my opponents but excluded me.
Howie Hawkins added, 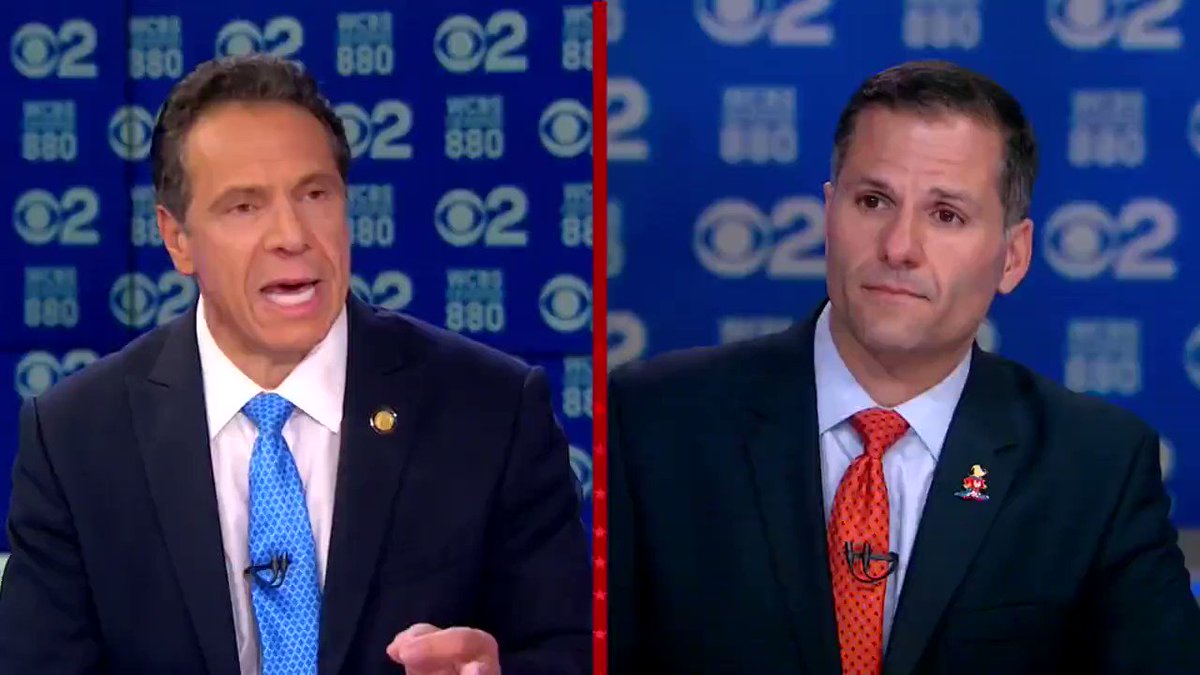 
Howie Hawkins is the Green Party candidate for governor of New York.

He should not have been excluded from the debate.

It is about fairness.

It is about a free exchange in the public square.

It is about being an informed citizenry.

It is about the airwaves and digital access we, as a country, have given CBS and what they, in turn, owe us.

Howie Hawkins should sue and CBS should provide him with equal time.

At the top of BLACK AGENDA RADIO this week, co-host Glen Ford declares, "BLACK AGENDA REPORT was there for the March on the Pentagon."

It's really a revolutionary statement when you grasp how so many cannot say the same, how many have chosen to ignore last Sunday's Women's March on the Pentagon.

@democracynow why didn't you cover the women's march on the pentagon.
0 replies0 retweets0 likes

Need any more proof that @democracynow sold out to the corporatists and capitalists? #AmyGoodman didn't even cover the #WomensMarchOnThePentagon. YEP.
1 reply1 retweet4 likes

That's right.  Blatant self-promoter Amy Goodman, still touting herself as the daily author of "the war and peace report," continues to ignore peace.


By her actions, she reveals herself.

Lisa Davis: Lisa Davis.  I am currently representing the People's Organization for Progress here at the Women's March on the Pentagon but I'm also a member of the Black is Back Coalition for Peace, Justice and Reparations.


Bruce A. Dixon:  So what do you think about the military as a solution for Black youth here?

Lisa Davis: The military is no kind of a solution.  The military is based on destruction and war and US imperialism which basically means stealing the resources from people who happen to be non-White all over the world and using it for their [the empire's] benefit and stealing the resources -- their land, their history, their culture, the physical destruction of their bodies and of their minds. I am definitely anti-war, anti-imperialism.

Bruce A. Dixon:  Your elected officials -- especially the Black ones in New Jersey -- are any of them opposed to the wars that we're involved in?

Lisa Davis:  I don't think that they are even aware that we have a war.  They act like they don't care because they don't and I think the difference is that they never bring it up.  That's one of the things that I'm extremely disappointed in because I think that this movement, the Black Liberation struggle, every movement, people on the front lines of the homelessness and everything should be making the war --and stopping the war -- a primary issue in these elections.  No candidate at all should be able to talk to anyone without stating their positions on these wars, these immoral, unjust wars.


Are Lisa Davis' opinions worth hearing?  BAR thinks so and I believe most people would agree -- especially in a media landscape where lobbyists appear on 'news' programs without disclosing who signs their paychecks, where the only voices invited to discuss war or peace are retired generals where never a doubt will be aired when it's time for war, war and more war.


Bruce A. Dixon spoke at the march in DC and, at THIRD, we noted some of his remarks in "Editorial: What can you do?"


Bruce A. Dixon:  We caught Lucy McBath in a place of worship where she came trolling for votes recently and we asked her about the 800 military bases that the United States has around the world.  You know what she said to us?  Lucy?  Oh, oh, Lucy McBath is known for having, unfortunately -- not unfortunately, tragically, criminally, her son was gunned down in Jacksonville, Florida in 2012.  Anyway, we asked her about the 800 military bases and she told us, "Well, you know what, I'm going to have to study up on that."  That's what she told us.  You know, it would be one thing if that was a one-off. But, at BLACK AGENDA REPORT, we took a quick look at Democratic Party Congressional candidates supported by the three organizations that are giving aid to so-called progressive Democrats -- that would be Justice Democrats, A Brand New Congress and Our Revolution.  Those guys were responsible in large part for the success of Alexandria Ocasio-Cortez in New York City and some other stuff.  Anyway, they've got about 30 Congressional candidates around the country.  22 of them have no positions whatsoever on foreign policy except for support of the state of Israel.  Now, damn, what does that tell us about our Democratic friends?  And not only are some of them our friends, for God's sake, some of them are our families, so let's be real, alright?  I'm not talking about the folks who draw a salary for doing this, I'm talking about the folks who actually have these choices put before them as voters and are not consulted before or after.  You see, that -- that's the problem.  We talk on the left about holding their feet to the fire, but in the real world, I'm afraid that, there ain't no real mechanism under the law for us to hold their feet to the fire.  If only there was.  We as a movement are going to have to come up with something new.  We're going to have to come up with something creative.  It's going to have to violate norms of conduct and the rule of law.  It's going to have to.  I don't know what it's going to look like.  I'm an old man. But I'm going to stick around a few more years to see what it looks like.

While it's no surprise that Rachel Maddow would suppress that message, grasp that Amy Goodman suppressed it as well.

Along with the DC action, there were actions around the country.

Photos from the Las Vegas WOmen's March on the Pentagon. I was honored to speak on behalf of Jewish Voice for Peace. facebook.com/sethmor/posts/…
0 replies0 retweets1 like

As the violence continues to brew, Iraq still has no government and the clock is ticking.  Prime minister-designate Adel Abdul al-Mahdi basically has ten days, if the country's Constitution is followed, to form a government.  That means presenting nominees for his Cabinet to the Parliament and getting Parliament to vote in favor of each minister.  There are grumblings on that issue.  ASHARQ AL-AWSAT reports:

Mohammed al-Khalidi, head of Tomouh bloc, stated to Asharq Al-Awsat newspaper that the deputies didn’t receive until this moment any curriculum vitae of ministers to be voted on and studied. He added that they didn’t even receive the government's program on which confidence is granted through voting, which is a matter of great importance.

On whether the government will garner the votes when presented in front of the parliament, Khalidi said that he expects so but not easily despite the presence of two huge blocs supporting the prime minister-designate which are: Alliance Towards Reforms and Fatah Alliance.


In the US, the propaganda continues.  Carlo Versano (CHEDDAR) types:


Valerie Plame Wilson says a movie about the George W. Bush White House's exposure of her covert role as a CIA agent is more relevant than ever in the Trump era of "lies and deception."
Plame spoke to Cheddar Monday alongside director Doug Liman on the occasion of the re-release of Liman's 2010 film "Fair Game," which tells a dramatized version of the story that became widely known as the Plame Affair and eventually led to the conviction of top Bush aide Scooter Libby on charges related to blowing Plame's cover.
Plame, a former covert nuclear proliferation specialist, was outed as a spy by a newspaper columnist in 2003 after her husband, then-ambassador Joe Wilson, wrote an op-ed in The New York Times that cast doubt on one of the Bush administration's pivotal reasons for invading Iraq. Plame's identity was then leaked to Robert Novak of The Washington Post by White House officials looking to discredit his findings.


Valerie Plame -- a case study in vanity.  Can she ever just go away?  First off, Richard Armitage publicly confessed to outing Plame.  Second, that Scotter Libby did was shocking only to idiots.  (We addressed his relationship with Judith Miller in our parody piece "Rudith Miller" back in January of 2005 -- months and months before it was revealed.)

As to that being why we arrived here today?

No.  Valerie Plame (and people like her) are why we are where we are today.

Valerie Plame did nothing to help anyone not named Valerie Plame.  She was rightly mocked for her photo shoot with VANITY FAIR -- the blond in the sports car.

Excuse me, in the years since, she's embraced hatred for the Jews and that resulted in her losing a post.  That's about all she's done, embraced hatred.

For someone who wants to pretend she's of some import -- she'e meaningless and a piece of s**t -- ask her what she did to stop the Iraq War?

And we're not just talking about while in the CIA but in her many, many years out of the CIA.

She did nothing.  She couldn't even be bothered to Tweet about Iraq unless (a) it was the far ago past and (b) she could work her own name into the Tweet because, please understand, every event of importance must begin and end with Valerie Plame.

She has refused to call out the ongoing war.  She is useless.

Doug Liman?  Has there ever been a bigger closet case?  At 53, you'd think he'd get honest or at least stop using male actors as his personal Barbie dolls.  Liman is, was and remains a minor talent.  His FAIR GAME was a bomb in 2010 and remains one today.

But, hey, it's 2018 and here's Valerie Plame.  She can't talk about the ongoing Iraq War but she can talk about a movie based on her.  An old movie.  A film that bombed.  Let's not pretend she hasn't wasted her life.

Astonishing fact: In 2002, 33 IR scholars paid for an ad in NYTimes against Iraq invasion. sadat.umd.edu/sites/sadat.um…. None has since been asked to serve in government or advise a presidential campaign. None has spoken at annual meetings of the @CFR_org. From @stephenWalt new book.
30 replies641 retweets1,191 likes


Yet Valerie Plame is still talking about herself and none of the victims of the Iraq War.