This is Isaiah's THE WORLD TODAY JUST NUTS "Get her, Hillary!" 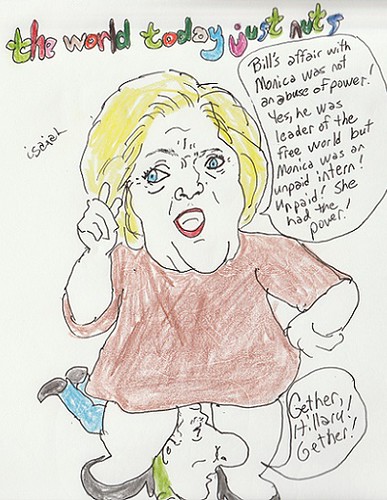 How disgusting is Hillary Clinton?  Pretty disgusting, I would say.

It really is surprising.  All these years later, she still cannot tell the truth.  Of course it was an abuse of power when President Bill Clinton had sex with intern Monica Lewinsky.

He was the leader of the free world, he was married.

She is so full of it.

That is why she remains so unpopular all these months after the election.


Her cult tries to pretend she is amazing but the real world rejects this absolutely.

🌹 🌹Jay Deshpande 🌹 🌹‏ @jaydesh7
Replying to @LgFski @Morlock43 and
Prepared how? In that she had the fanciest resume?? Her time as senator is filled with disgusting votes like the Iraq War & the Patriot Act. Her time as Sec of State is filled with war crimes and quid pro quo corruption. To like Hillary even a little bit is to not know her at all
2:48 PM - 14 Oct 2018
3 replies1 retweet6 likes

sabrina4bernie‏ @sabrina68
Replying to @thelucinator70 @rawideasinc and
Also,rape is a weapon of war, her support for every war from Iraq to Yemen, says she cares nothing about Sexual Assault. No one can be a supporter of women and support WAR. Every day we learn of more horror stories abt women being raped in her wars. Not once has she mentioned it
4:13 PM - 14 Oct 2018
0 replies0 retweets1 like

Lindsey Barrett‏ @LAM_Barrett 17h17 hours ago
She was a 22-year-old intern and he was the president of the United States. It’s honestly hard to think of a dynamic that is *more* clearly an egregious abuse of power.
243 replies1,820 retweets5,977 likes

Monday, October 15, 2018.  Iraq struggles to form a government and, in the US, the Women's March on the Pentagon approaches.

Iraq held elections May 12th.  They're still trying to form a government all these months later.  AFP notes:

US State Department number two John Sullivan departs yesterday for Iraq to meet with the country’s new leaders, the highest level administration official to do so since their election.
Sullivan will visit Baghdad and Arbil, the capital of the Iraqi Kurdish autonomous region, the State Department said.

The US deputy secretary of state will meet with the newly elected speaker of parliament, Mohammed al-Halbusi, as well as President Barham Saleh and Prime Minister-designate Adel Abdel Mahdi.


The US State Dept notes that Sullivan met with al-Mahdi on Sunday.


Readout
Office of the Spokesperson
Washington, DC
October 14, 2018
The below is attributable to Spokesperson Heather Nauert:
On October 14, accompanied by U.S. Ambassador to Iraq Doug Silliman and Deputy Assistant Secretary of Near Eastern Affairs Andrew Peek, Deputy Secretary of State John J. Sullivan met with Adil Abd al-Mahdi, Prime Minister-designate.
The Deputy Secretary congratulated Prime Minister-Designate Mahdi on his election, and together they committed to continue to build a strong and multi-dimensional relationship. The Deputy Secretary encouraged Prime Minister-designate Mahdi to continue with government formation quickly and in a manner that is responsive to the needs of all Iraqis.
The Deputy Secretary of State reaffirmed U.S. commitment to strengthen our ties with the people of this important country through our trade relationship, through cultural exchange, and through government-to-government relations.

And, as the Tweet below notes, Sullivan's also met with the outgoing prime minister Hayder al-Abadi. 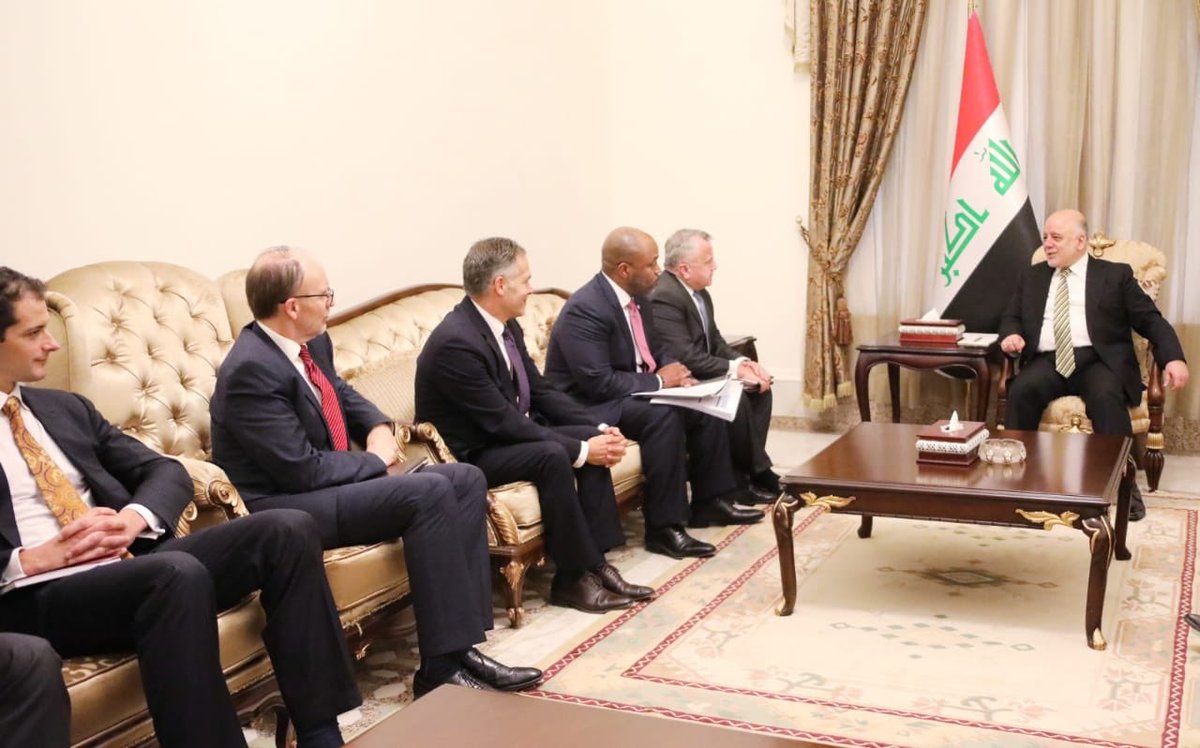 The US establishment has managed to influence prominent people within the Iraqi leadership, among these Sayyed Ammar al-Hakim and Haidar Abadi, the ex-prime minister. Abadi was surrounded by people who listened to the US and believed US hegemony would soon bring the fall of Iran, as it had been believed that Syrian president Bashar al-Assad’s government would fall in three months, six months or at most a year. Yet al-Assad remains in power: the regime change warmongers failed disastrously in reaching their objective even after seven years of war inflicted on Syria.
These same people pushed Abadi to announce that he would abide by US unilateral sanctions against Iran, thinking this would boost his chances for a second term. Abadi was ill-advised, yet he accepted this advice. That was his biggest mistake and the first nail in his political coffin. The US envoy to Iraq did everything in his power to promote Abadi but failed. According to top decision-makers in Baghdad, the US envoy actually warned Iraq against talking with Hezbollah’s representative, considered a “terrorist individual”. Faleh al-Fayyad, the head of National Security and commander of al-Hashd al-Sha’bi met with Ambassador Brett McGurk and informed him that “the US list of terrorists applies outside Iraq and certainly not against an Iraqi citizen (Sheikh Kawtharani holds dual citizenship)”. According to the sources, the US envoy responded that he is not acting against anyone, that he is not trying to stab Iran or Iraq in the back and that he would like to send a message to Qassem Soleimani that the US is not trying to twist Iran’s arm in Iraq.
A UN representative in Iraq met with the Hezbollah envoy to ease the already tense situation. Kawtharani told him: “our candidate is Abu Mahdi al-Muhandes. If the US wants to impose a candidate, let us see who will manage to reach power”.A meeting between a UN representative and a Hezbollah representative amounts to recognition of Hezbollah’s role in Iraq and is an indication of US’s desperation. The US was afraid of seeing an Iraqi leader in power with strong animosity to the US.


"Gonna put it in the want ads."  That's what Iraq's prime minister-designate Adil Abdul al-Mahdi did.  Last week, Mustafa Abu Sneineh (MIDDLE EAST EYE) reported, "Iraq's new prime minister on Tuesday launched a government website allowing Iraqis to apply for ministerial jobs online, in an unprecedented move in the Arab states. Several Iraqis have already announced their applications on social media."  RUDAW noted, "So far, 36,006 people have applied for a post in Iraq’s new cabinet, using the website set up by Prime Minister-designate Adil Abdul-Mahdi. The majority of applicants, 97 percent, are independents, according to figures released by Abdul-Mahdi on Facebook on Wednesday."  ASHARQ AL-AWSAT finds a source who sees a strategy in the move, "When asked whether Abdul Mahdi would benefit from those who applied for ministerial positions through the e-portal, he replied that the assigned PM killed two birds with one stone by putting pressure on political blocs to submit the names of candidates to avoid choosing from names on the e-portal."  While the move has been hugely popular with those applying, not everyone is thrilled.  Today, IRAQ TRADE LINK NEWS AGENCY reports that Ammar al-Hakim (president of the National Wisdom Movement) feels this could destroy Iraq and that "we cannot look for ministers in universities, coffee shops and the streets."

In the Tweet below, he's calling for an independent and professional government that's balanced and service ready. 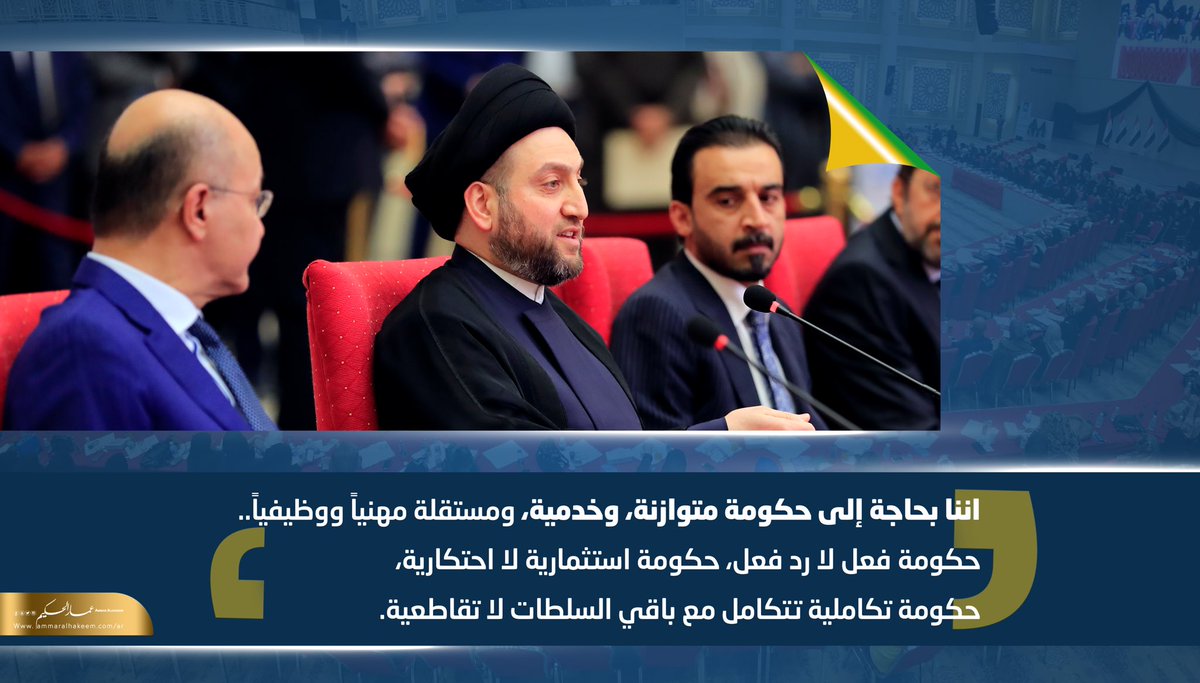 In a statement directed at the Iraqi Sunnis and Sunni politicians, Sadrist movement leader Muqtada al-Sadr said that public interests should precede party interests, and that quotas should be avoided while forming the next government headed by newly elected Prime Minister Adel Abdul-Mahdi.

On his official Twitter account, Sadr called on Sunnis to provide independent qualified technocrats “to live together safely away from the treasonous dagger and corruption.”

Chloe Cornish and Asser Khattab (FINANCIAL TIMES OF LONDON) maintain that Mahdi opened the application process "to show he is serious about change in a country fed up with crumbling infrastructure and endemic corruption."  The writers note that he was a member of the Islamic Supreme Council of Iraq (Ammar al-Hakim was president of that organization) and they provide this background:

Expelled from Jesuit missionary school in 1957 for joining political demonstrations, Mr Abdul Mahdi studied economics and trade in Baghdad and took a scholarship in Paris. With Saddam Hussein’s Ba’ath party in power, Mr Abdul Mahdi pursued academia and publishing in France, Lebanon and his mother’s home country of Syria, and travelled to Iran and the US. He later gravitated to Shia Islamist politics, and since 2003 has spent time as vice-president, finance minister and oil minister.
Another leader, another flee-er.  Iraq has so many who did not flee.  When will one of them become the prime minister?  Maybe on the day when the Iraqi people choose their prime minister instead of the selection being made by the governments of Iran and the US.
Iraq is still not a democracy.  Iraq is still not 'liberated.'  Iraq is still both a crime scene and the location of an ongoing war.  It's time to end the never-ending wars.
One effort to do just that will take place this weekend in DC and many cities across the country, The Women's March on the Pentagon.
Join us at the Pentagon on October 21st. Hear from @Green42020 and others as we call for an end to the bipartisan war machine. #WomenRise4Peace marchonpentagon.com/march

Tamer Yazar‏ @tameryazar Oct 12
Women's March on the #Pentagon , October 20-21 on the 51st anniversary of the 1967 big antiwar event in #WashingtonDC & subsequent march on the Pentagon that had 50,000 people WE MUST MARCH FOR PEACE AND AGAINST THE WAR MACHINE @WomenMarch4Paz @OccupyWallStNYC @AMarch4OurLives

Popular Resistance‏ @PopResistance Oct 11
This is NOT a pink-pussy-hatted event to only oppose Trump and Get Out the Vote for the treacherous and warmongering Democrats (or Republicans): This is a principled non-partisan march on the bi-partisan US war machine. @WomenMarch4Paz #WomenRise4Peace
1 reply46 retweets48 likes

Women’s March on the Pentagon‏ @WomenMarch4Paz Oct 11
Join us at the Pentagon on October 21st. Hear from Walter Teague and others as we call for an end to the bipartisan war machine. #WomenRise4Peace marchonpentagon.com/march


Isaiah's THE WORLD TODAY JUST NUTS "Get her, Hillary!" went up earlier.   New content at THIRD: