NYT and the column

Please read Elaine's "That bad NYT column" which I agree with very strongly.  Also check out these Tweets:

Wednesday, September 5, 2018.  The protests continue and the protesters continue to be killed -- who will stand up for them?

Deadly protests rage in Iraq over lack of services as political transition deadlocks. Our round-up of a chaotic week in Iraq:
2 replies15 retweets6 likes

Basra tonight. Serious clashes in the Iraqi port city as protests escalate. Not clear who is behind the fires. Deaths and injuries reported. #Iraq #Basra
8 replies49 retweets29 likes

VIDEO: Protesters demonstrate outside the local government headquarters in Basra, the oil-rich city in southern Iraq shaken by two months of rallies over unemployment and the dire state of basic public services

Basra is an example of the failures of the Iraqi government -- the continued failures.

I met with Iraqi Prime Minister al-Abadi. We discussed Iraq's recent elections, our countries’ joint commitment to defeating ISIS and combating terrorism in the region, and our shared desire to build a better life for the Iraqi people.
76 replies193 retweets868 likes

A shared desire to build a better life for the Iraqi people?

Hayder's had four years to do that, Elizabeth, four years, and Basra is only one example of his failure.

So what are you doing, Elizabeth?

You're not just a US senator, you're someone who wants to be president.

So what are you doing?

You claim some "desire to build a better life for the Iraqi people."

The Iraqi people are in the streets, risking their lives, to call for basic rights.

What are you doing?

The Iraqi people need help, what are you doing?

No one asked you to try to grandstand on Iraq on July 4th.  You chose to.  And Hayder was a joke already before your Tweet.  You chose to get in there so what are you going to do now?

This isn't fun and games for the Iraqi people.

Do you even care?  Or was it just your effort in building empire?  You're a well known fake ass who spent your life being a Republican and then suddenly drifted to the left or 'left.'  At what point do you take an action -- a real action -- the proves you mean what you say?  For someone hoping to be president in 2020, you don't have a lot of time to waste.

Like Elizabeth Warren, the US government wants the inept Hayder al-Abadi to have four more years as prime minister.  (Barack Obama installed Hayder in 2014.  That's what happened.  We've always said it.  NPR said it too -- on air -- not all that long ago.) 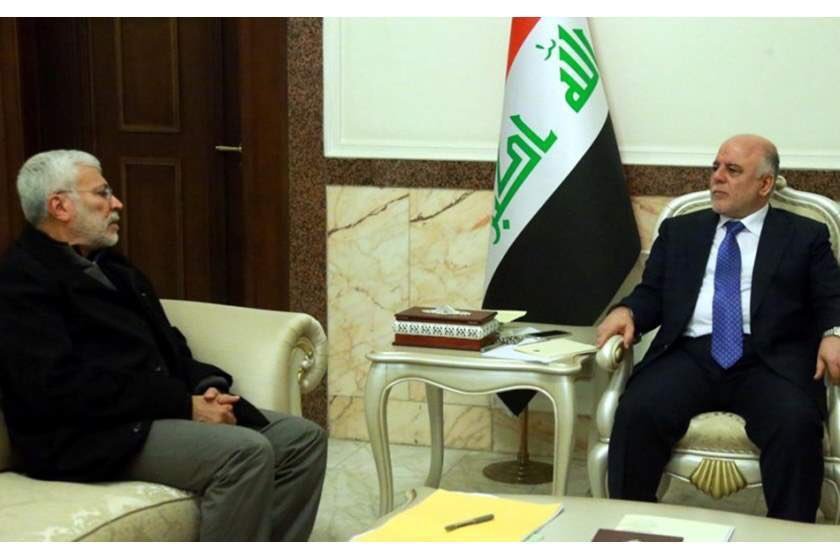 
The battle between the US and Iran came to light overtly in the first session of the new Iraqi parliament. This contest will remain open until the federal court decides which of the two coalitions holds the largest number of deputies and is therefore eligible to form a government (the Speaker – and his two deputies-, the President – and his two deputies – who will ask the Prime Minister to form a government). Haidar Abadi, the interim Prime Minister, failed to present the largest coalition but managed to gain more time to enable his ally, the US, to exert even more pressure on Iraqi politicians on Abadi’s behalf. But whatever direction the wind blows, there is no doubt that Iran now has over 150 MPs supporting it. Thus, any US attempt to isolate Tehran or unilaterally control Mesopotamia has irreversibly failed.

Magnier outlines how the Kurds are sitting it out currently, waiting to see who will make what promise -- let's hope the Kurds have finally learned that words are empty from all the broken promises of the past.

Hero Talabani's nonsense over the weekend was her making clear what the PUK wants (demands) for their support: The post of president.  The Talabani family is corruption defined.

That she thinks she can make demands today is appalling.  She should be sitting in prison for deceiving the Iraqi people.


Amid continuing political deadlock in Iraq, the selection of the country’s next president remains mired in confusion despite the return of incumbent president Jalal Talabani from medical treatment abroad on Saturday.
Reports say that Iraq’s Kurdish parties were unable to agree on the nomination of a single candidate for the presidency over the weekend, despite expectations that a parliamentary session to confirm the choice will take place on Wednesday.
The Iraqi presidency, a largely ceremonial post, is reserved for a member of the country’s Kurdish minority under an informal agreement that emerged during attempts to form a new government in the wake of the 2003 US-led invasion of the country.

From December 2012 to July of 2014, Jalal The Fat Ass Talabani was not in Iraq.  He was also not carrying out his duties as prime minister.  He couldn't speak.  He couldn't move.

But Hero lied to the Iraqi people.  She lied to start with denying he'd had a strike.  She took part in the lies of photo ops, posing Jalal (who could not move on his own) for a series of photos (denounced on Arabic meeting as a bad rip off of WEEKEND AT BERNIE'S) to make it appear he was meeting with people and taking part in discussions.  He would be back in Iraq shortly.  She said that six weeks in, she said it three months in, she said it . . .

Per the Iraqi Constitution, Jalal was not able to carry out his duties and should have been replaced.  But Hero lied over and over.  She deceived the Iraqi people.

That alone is outrageous.

But grasp that actions have consequences.

Thug Nouri al-Maliki was given a second term as prime minister by Barack Obama (via The Erbil Agreement).  This second term found the thug becoming even more of a thug.

Could Jalal have stopped any of that?  Maybe.  Maybe not.

But what did happen while Iraq was without a functioning president was that Nouri persecuted the Sunnis repeatedly and constantly and ISIS was able to take root as a result.

Hero Ibrahim Ahmed, widow of Jalal Talabani: “I find it very important for the #PUK to assume the post of [#Iraq] president again and it should be done according to agreement with the #KDP brothers.” 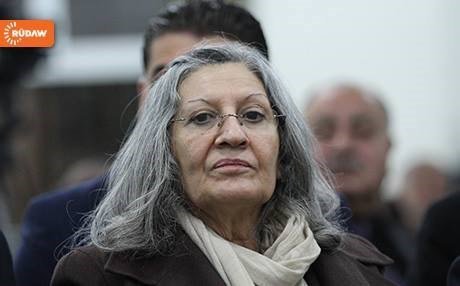 It’s not up to Hero Ibrahim, nor Bafel Talabani who would be next #PUK candidate for #Iraqi presidency, some sources claim that Qassim Sulaimani is the guy who suggested Barham Salih as the next Iraqi President candidate by PUK. Again this move is politically suicide for Barham.
1 reply1 retweet4 likes

Hero Talabani, late Talabani’s wife and her two sons Bafel and Qubad Talabani visit Masoud Barzani to strength the ties between the two ruling clans: NRT TV. Barzani has accused Bafel and Hero of betrayal over fall of Kirkuk less than a year ago. #Kurdistan
6 replies6 retweets32 likes

Yes, Hero and her family also sold the Kurds out on Kirkuk.

There's a reason why the PUK has gone from being, along with the KDP, the dominant party in the KRG to now running a distant third to Goran (which was built with CIA seed money).


Let's move to another female face of empire.

“If @SenatorCollins and @lisamurkowski vote to confirm Brett Kavanaugh they will be voting to take away many of the rights and freedoms I fought to defend and uphold.” VoteVets launching $330K buy in Maine and Alaska featuring Iraq War Veteran Kate Logan. #KavanaughConfirmation


First off, your military service didn't make you an expert on s**t beyond loading weapons.  You didn't build democracy.  You don't know what you're talking about.

Second, Kate Logan, you should be on your knees begging the Iraqi women for forgiveness.  How dare you use your actions in Iraq to claim that you stood for women's rights.  The US mission was to destroy the rights of Iraqi women.  Quit whoring, you cheap trash.  You're not a hero.  You're not anyone to admire.  You took part in a criminal activity that destroyed the country of Iraq.  The women of Iraq had the best standing in the Middle East.  You helped destroy that.  You helped destroy their rights.  How dare you now lie and pretend like you were in Iraq for women's rights.  Your words would be laughable were it not for the very real suffering the Iraqi women have endured.

I'm really tired of people who could be tried for War Crimes trying to use their military actions as ground to stand on.  You should be ashamed.  Vote Vets?  I believe the CIA idiot fails to understand who she would serve in Congress.  I've laughed at her repeatedly because she is so deeply stupid.  But I haven't felt the need to call her out because, unlike Kate Logan, she's not trying to pretend that she fought for the rights of women.

Hey, Kate Logan, the US service members who plotted a home invasion, who killed a five-year-old girl and her parents when not taking turns gang-raping Abeer Qassim Hamza al-Janabi -- were they advancing women's rights too?


"Let me be clear," Kate Logan, you need to take responsibility for the way your actions destroyed the lives of Iraqi women.  You have no defense.  You chose to join and you chose to join in 2005.  By then Iraqi women were already in the streets protesting what the US war and occupation was doing, how their rights were being slashed in the US rush to hand over control to radical despots.

I don't care if you're scared that you may not be able to have an abortion in the future, Kate.  I do care that in the right now you have destroyed the rights of Iraqi women and you have no awareness of that.  You're a stupid idiot and yet another example of how so few learn in the military.  You learned to follow orders, Kate, you didn't learn much else.  You still feel nothing for the people of the country you invaded or for the destruction your actions caused.  Sit your tired ass down.  No one needs to here from you.  And instead of expecting us to thank you for your actions, how about thanking the American people for paying your wages and apparently increasing your vanity?

Kate reeks of entitlement and are we surprised?  A woman who identifies with oppressors is always a freak and Kate's a super freak.  She wants us to listen to her because she helped destroy the lives of women in another country?  The only thing greater than her White entitlement is her complete lack of awareness.


Iraq did not attack the US.  The US attacked Iraq.  It's a reality Kate wants us to all forget.  Oppressors never push for honest dialogues.