Barbra Streisand and other disappointments

American attitudes about the US invasion of Iraq are nearly evenly split 15 years after the war began, a new Pew poll finds.

Forty-eight percent of respondents said the US made the wrong decision in using military force in Iraq, while 43% said it was the right decision.

The poll, which was conducted from March 7-14, found that more than half of Americans (53%) believe the US mostly failed to accomplish its goals in Iraq. Only 39% said they thought it had mostly succeeded.

That number saying it was a mistake should be much higher.

Blame Hillary and Her Vaginal Secretions.  They have refused to be honest.  And then you get lunatics like Barbra Streisand.  What was she thinking?  How badly is James Brolin cheating on her that she has become such a nut job?  Cloning her dogs, saying she misses Bully Boy Bush.  What a lunatic.

Makes me remember how, when I was a kid, artists left the stage with a little more grace.  75-years-old and Ms. Streisand has that raggedy hair (it is a wig) and a face that looks like a Muppet because she has had so many fillers put in.

Look your age.  Why is everyone so obsessed with looking younger?

I am only a few years younger than Ms. Streisand but I have no desire to look like a monster or someone who got hit with a stick so hard  that my face started swelling and never went back down.

That is actually a great song.  On her recent tour, Ms. Streisand felt the need to insult it.

As if she has ever written anything worth remembering?  “Evergreen” – which she only wrote the music to – is too much like too many other songs – including another song on the soundtrack for A STAR IS BORN.  “Stoney End” was written by a real artist, Laura Nyro.  She wrote many excellent songs including “Wedding Bell Blues,” “And When I Die,” “Stoned Soul Picnic,’ and “Eli’s Coming.”  Barbra wrote . . . Well, nothing really.  Paul Williams wrote the lyrics to “Evergreen.”  It was popular once upon a time and people sang it at weddings a long time ago.  If you cannot tell, I am still ticked that Ms. Streisand mocked the late Laura Nyro.  It was rude and insulting and demonstrated yet again how bad her manners are.  For those who do not know this, Diana Ross was the queen of the radio, not Ms. Streisand.

In 1964, “People” was Ms. Streisand’s first top forty hit which went to number five.  Her seventh single later “Second Hand Rose” went to number 32.  15 songs later, “Stoney End” hits number 6 in 1971.  She had one bomb after another after “People.”  And “Second Hand Rose” going to 32 is really nothing.  I mean, during this same period – 1964 to 1971 – Diana Ross sang lead on 13 number one hits.  And Ms. Streisand did not have one number on hit.  She as out of style and out of date.  She has gone through the swing sixties being the singer your parents listened to.  The folk rock boom passed her by, the Beatles, Sonny & Cher, the Mamas & the Papas, Simon & Garfunkel, acid rock passed her by, Jefferson Airplane, The Doors, The Who, all passed her by along with Pink Floyd, Bob Dylan, Aretha Franklin, Dionne Warwick (someone who was sophisticated but also appealed to those of us who were young in the sixties), Janis Joplin, The Grateful Dead, Melanie, the Rolling Stones, The Kinks, CCR, The Moody Blues, Smokey Robinson & The Miracles, The Temptations, The Four Tops, the Beach Boys, Jan & Dean, The Shangra-Las, Leslie Gore, Sandie Shaw, Dusty Springfield . . .

These were the acts appealing to those of us who were young in the sixties.

Richard Perry saved Barbra’s recording career.  She had already tried to go contemporary and failed.  Mr. Perry got her to listen to modern music and is the reason she recorded “Stoney End” – which she hated.  But her lack of hits had effected her sales and she needed a hit badly.

So she did “Stoney End” and people loved it and now she goes on stage and trashes the song?  No manners, no class.


15 years on and still the Iraq War continues.  The war continues, the occupation continues, Iraq remains a colonial outpost for the US and UK governments.

Took this photo 15 years ago today, waiting to invade Iraq—all unaware we were about to be part of the greatest lie and greatest crime of our generation 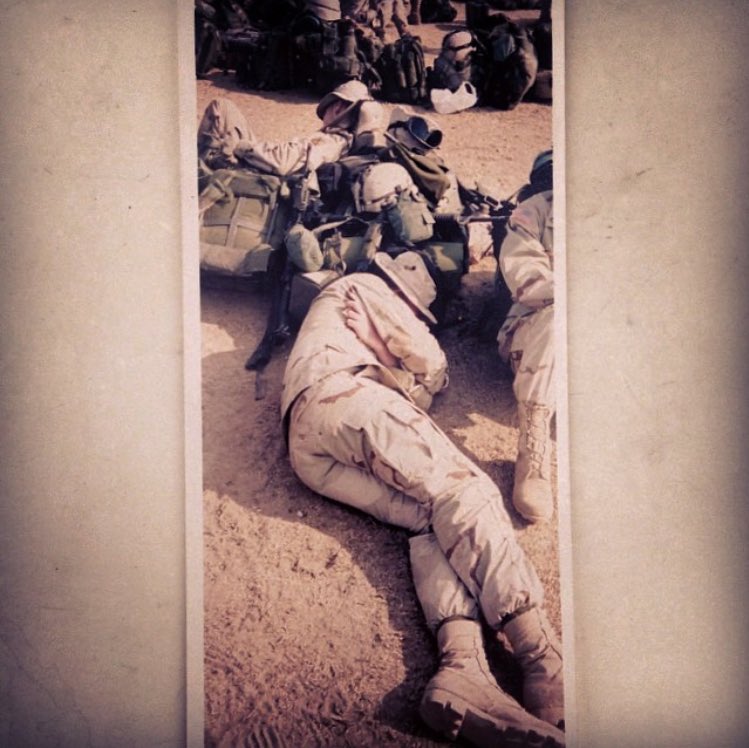 
When does the Iraq War end?  We should be demanding the answer to that question.

My name is Penny Evans and I've just gone twenty-one


A young widow in the war that's being fought in Vietnam


And I have two infant daughters, I thank God I have no sons

The war and the occupation of Iraq continues all this


Mitch Jeserich: Now the conventional war itself only took about a month and would end with the toppling of Iraqi dictator Saddam Hussein.  But Iraq would remain to this day incredibly unstable as much of the Middle East and it could be argued that the instability around the Middle East was also due in part to the invasion of Iraq.  The total number of people who died in the war -- and it's hard to get an exact estimate, but they range, on the very low side, to far more than 100,000 people to,  the high side, of over a million people.  And for people in the United States this war who had popular support at the beginning though, of course, not from all quarters that support waned as the war dragged on.  US soldiers and contractors deaths added it up it became clear Iraq did not have Weapons of Mass Destruction and reports also made it clear that the United States committed systemic torture.  Today, the  Iraq invasion of 2003 is considered the biggest foreign policy mistake in US history -- argued by many -- and right there with the Vietnam War.


Many got it wrong.  Many walked away.  At THIRD, Betty, Elaine, Trina, Ava and I had discussed a piece that time ran out for.  But here are ten that deserve mention for not just making the hard calls when everyone talked about the Iraq War but who have continued to make those hard calls and refused to provide cover for political favorites.

These are the ones we had agreed on -- Betty, Elaine, Trina, Ava and I -- and the plan was to include them on a list -- a much larger list -- with other choices for people who had not walked away from the topic.  A lot of people would not make the list because, for example, like United For Peace and Justice, they closed shop after Barack was elected in November of 2008.  Fakers.  But it's important to note the people who did make a difference.

Yesterday, we noted the latest poll which found more people still believe the Iraq War was a mistake but that the numbers for that position had dropped.  That's because people walked away from Iraq, so called leaders in the US.  It's also because hypocrites have to deny Iraq.  They voted, for example, for Hillary Clinton and they have to disappear Iraq.  Or they are members of The Cult of St. Barack, so they have to disappear Iraq.

And it's very hard for We The People to know what goes on Iraq today.

Community members surveyed the 'independent' media landscape yesterday and found disappointing results.  Trina noted US Socialist Worker had nothing on Iraq, Ruth noted that THE PROGRESSIVE had no interest in Iraq, Marcia noted the same with IN THESE TIMES and Betty noted THE NATION's useless Katha Pollitt.  And, for the record, THE NATION did have one article on Iraq -- sadly, it's the Phyllis Bennis article.

It's that awful piece that we covered in the February 22nd snapshot.  25 days ago!  How timely.  As we observed then:

It's a curious editorial -- one that leaves the impression that the Iraq War is over.If it's over, Phyllis, why are US troops still on the ground in Iraq.The editorial hits new lows of whorishness as it names various people -- all Republicans.  I'm sorry, Phyllis, but it was the Democratically controlled Senate, in 2002, that voted for the Iraq War.  Not only does she ignore that, she also ignores certain key others.


The Iraq War is not over.  For example, over the weekend, the DOD issued this about those killed in the US helicopter crash in Iraq:

The war is not over.  And it now includes the ongoing occupation.  From US Major Danny Sjursen, "Unmitigated Failure: Operation Iraqi Freedom, 15 Years Later" (ANTIWAR.COM):

America, the guileless behemoth, brimming with hubris, somehow cannot see it. The sheer irrationality of the whole endeavor borders – 15 years later – on the absurd. The only real winners in Iraq have been a chauvinist brand Iranian Shi’ism, and the trademark Wahhabi Sunni Islamism of Saudi Arabia. Neither is a true friend to US interests or values. Neither cares whether US soldiers live or die. Each has its own agenda and plays US policymakers and generals like so many fiddles. The rational move for America is to opt out; do less; and walk away before sinking farther into the next quagmire. Unfortunately, compressed so narrowly between adversarial forces, and obtuse as ever, American "statesman" can’t see the way out.
These wars won’t end well for the United States, just as matters didn’t end well for my platoon, wedged, as it was, between micro-factions of these same adversaries: Saudi Arabia and Iran.
The Sunni precursors of ISIS shot Sergeant Ty Dejane through the spine – he’s still in a wheel chair. The Shia militiamen aligned with Iran exploded a massive bomb which unleashed shrapnel that tore apart three other young men. Sergeant "Ducks" Duzinskas lost most of an arm. Sergeant Alex Fuller and Specialist Mike Balsley lay dead. They never knew what hit them, just as our platoon never knew who, or what, exactly, we were fighting.

My boys were sacrificed on the altar of American hubris. That’s the war I remember, and the one the US still fights – futilely – in the Fertile Crescent. Perhaps the citizenry should ponder that…before the next escalation in Iraq.


The next escalation because the war's never ended.

But grasp that even on the so-called left, the American people are left in the dark about Iraq.    THE NATION, THE PROGRESSIVE, IN THESE TIMES, et al.  They fail to cover Iraq.  They fail to note it.  How are people supposed to be aware that the war continues when their own media doesn't tell them that truth?

Even on the 15th anniversary, these whorish, money grubbing outlets can't cover Iraq.