It is not a minor thing

Sarah Abdallah‏ @sahouraxo  5h5 hours ago
Sarah Abdallah Retweeted Peter Daou
With Obama, she unleashed Al-Qaeda terrorists on our homelands then told the world they were "moderate rebels". THAT is what she did to us.
Sarah Abdallah added, 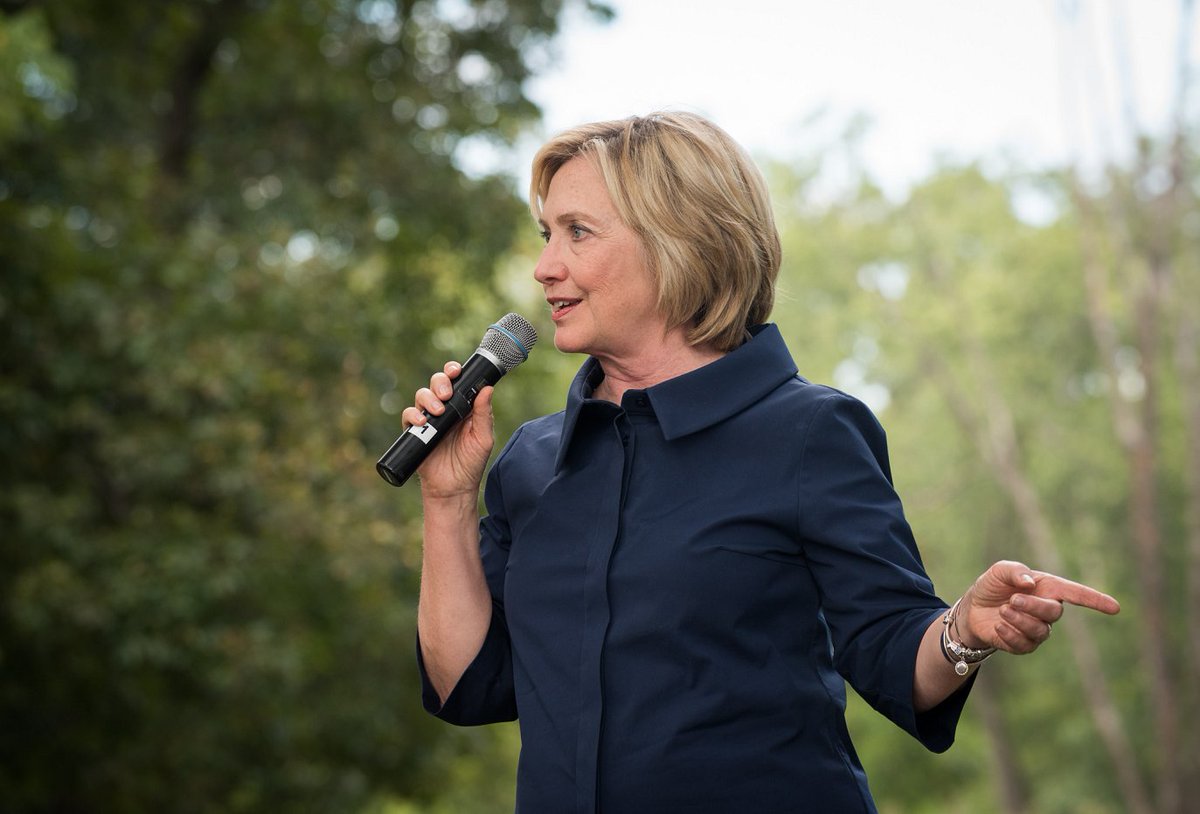 Peter DaouVerified account @peterdaou
The boiling, seething hate for Hillary I'm exposed to daily as her defender is mind-numbing. WHAT DID SHE EVER DO TO THESE PEOPLE?
40 replies415 retweets576 likes

And it really is amazing to watch The Debra Messings and all their shrill cries of support for Hillary Clinton as though the people killed around the world do not matter -- as though Hillary's actions are something minor.

Sarah Abdallah added,
Rep. Keith EllisonVerified account @keithellison
Can't understand why some (thank goodness only a few) people have a bigger beef with HRC than Trump. I just don't get it.
83 replies538 retweets1,015 likes

How do you not grasp this?

She is a war monger.

She would have been a complete disaster as president.

I donated, I tried to get people to vote for her -- I blogged about her here.

I gave her the benefit of the doubt on Iraq (and Afghanistan).

But as Secretary of State, we saw she only had one answer: War.

She is a killing machine.

Friday, March 17, 2017.  Chaos and violence continue, The Mosul Slog continues, Iraqi civilians are killed in another bombing by US-led warplanes, George Clooney's beard presumes to speak for the US government, and much more.

In June 2014, the city of Mosul was seized by the Islamic State.

Finally, in mid-October of last year,t hey launched an operation to liberate or 'liberate' Mosul.

It took seven months to fight The Gulf War and retaking Mosul is already on month six?

Iraqi and U.S. commanders offered conflicting accounts Thursday of progress in western Mosul, where U.S.-backed Iraqi forces have been battling the Islamic State group for nearly a month as they try to retake the remainder of the city.

Maj. Gen. Joseph Martin, the American commander of coalition ground forces in Iraq, said the troops had recaptured "a little over a third" of neighborhoods west of the Tigris River, while Brig. Gen. Yahya Rasool, an Iraqi military spokesman, said they had retaken up to 60 percent, with fighting still underway. Iraq declared eastern Mosul "fully liberated" in January.

This is not the first time that the two have reported conflicting 'progress.'  Of the Iraqi claims, Jason Ditz (ANTIWAR.COM) offers, "That’s a lot of gains in the past few days, and particularly hard to believe since it’s only been a few days since they declared 33% recovered, and in those days that followed, fighters had described the advance as virtually halted by ISIS snipers and inclement weather."


What's not in doubt?

That yet another refugee crisis has been created by The Mosul Slog.

This is UNHCR's Babar Baloch:

As displacement from Western Mosul continues unabated, UNHCR, the UN Refugee Agency, is opening two new camps and asking donors for additional funding to help protect and shelter those forced to flee.Around 255,000 people have been displaced from Mosul and surrounding areas since October, including over 100,000 since the latest military campaign in western Mosul began on 19 February. The last week has seen the highest level of displacement yet, with 32,000 displaced between March 12 and 15.
For 2017, UNHCR needs USD 212 million, currently barely funded, to continue providing urgent assistance to IDPs from Mosul and for Iraqis who have crossed to Syria. The appeal includes a new request for an additional USD 7 million in the next 10 days and USD 30 million in the next two months, totaling USD 37 million.
UNHCR’s new Hasansham U2 camp, east of Mosul, is ready to shelter 3,000 people from this weekend, before expanding to 9,000, while Hammam al-Alil 2, 25kms south of Mosul, will be ready to receive 6,600 people on Monday and will have capacity for 30,000 when complete.
UNHCR continues to advocate with the Iraqi Security Forces and authorities for newly displaced people from western Mosul to be taken to camps east and north of the city, where there is capacity. We anticipate that IDPs will begin to be transported to camps in the north this week.
For several days, arrivals at the screening site at Hammam al-Alil have averaged 15,000 a day, with Iraqi Ministry of Transport buses bringing IDPs daily. UNHCR is doubling the capacity of the adjacent reception and transit centre from 20,000 to 40,000 to try to ensure a safe, relatively comfortable transit to other camps with capacity, as Hammam al-Alil 1 camp is now full. Protection partners are present at the site to identify and assist vulnerable IDPs, including separated families and unaccompanied children. New arrivals have been given the options of going to Gogjali, east of Mosul, Qayyarah, or other IDP camps, including the recently opened UNHCR Chamakor camp, now full to its 12,000 capacity after just one week.
While thousands displaced from western Mosul continue to arrive at the Hammam Al-Alil screening site, arrivals have slowed down in some of the camps receiving those fleeing western Mosul, suggesting that out-of-camp displacement is increasing.
Reports indicate some people are moving in with friends and family in east Mosul, finding shelter in tribal communities and squatting in unfinished buildings in southern and eastern Ninewa. The extent of out-of-camp displacement is still to be confirmed. Humanitarian partners are liaising with local authorities in east Mosul to identify the locations of IDPs who don’t live in camps and prioritize protection and assistance needs. UNHCR is prepared to support emergency shelter needs in urban locations and offer flexible solutions for up to 50,000 IDPs. Emergency relief items have been distributed in various locations around Mosul.

Another UNHCR camp at As Salamiyah 2, south east of Mosul, with capacity for up to 60,000 people, is being planned. UNHCR currently has 10 camps operating or under construction to host up to 111,000 people.


Again, this is an addition to an already existing refugee crisis in Iraq.

One group assisting the refugees is the Norwegian Refugee Council.  Their director in Iraq, Wolfgang Gressmann, notes, "People are arriving in the camp with only the clothes that they are standing in. They are cold, exhausted and hungry --crying from either exhaustion or trauma or both. NRC and other aid agencies are meeting their needs for now but we fear what will happen as the wave continues and even increases."

THE BAGHDAD POST reports this morning, "Al-Seha tunnel, located on the right bank of Mosul has been bombed by the jets of the US-led coalition, reports said Friday. The tunnel has been completely destroyed after the bombardment."


And this morning, the US Defense Dept announced:


Strikes in Iraq
In Iraq, coalition military forces conducted seven strikes consisting of 37 engagements against ISIS targets, coordinated with and in support of Iraq’s government:


-- Near Tal Afar, a strike destroyed a vehicle bomb facility and an ISIS-held building.

A lot of civilians are being killed.

Relatives react near the bodies of civilians killed in air strike, during a battle between #Iraqi forces and ISIS, in #Mosul #NRTnews 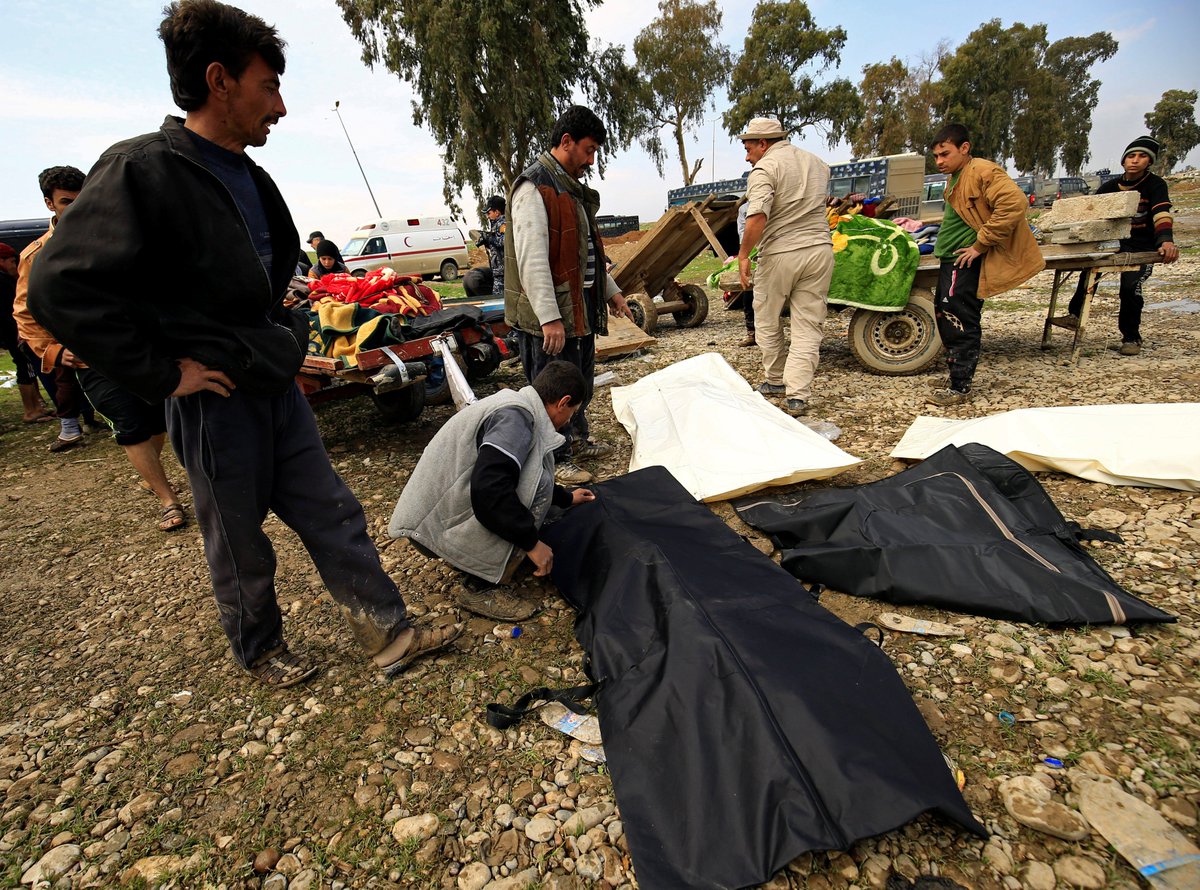 
And all of this for what?


THE PHILADELPHIA INQUIRER'S Trudy Rubin is a long time observer of Iraq -- and a reporter who never forgot the Iraq War continued.  She's back in Iraq and in her most recent column notes:

What happens when the fighting stops?
Most Iraqis worry that the same grievances that allowed the Islamic State to flourish will enable jihadi cells to regroup and reemerge. The history is there: Sunni anger at being marginalized by the U.S. invasion and by the sectarian Shiite-led governments produced al-Qaida in Iraq in the mid-2000s, and its successor group, the Islamic State.
Today, Sunni cities lie in ruins, their infrastructure deliberately destroyed by the jihadis or damaged by fighting. The Sunni community is divided between backers and supporters of the Islamic State, and all fear vengeance by Shiite militias.
Iraq’s moderate Shiite prime minister, Haidar Abadi, called for reconciliation at the Suli conference, but he heads a government financially strapped by the war and low oil prices, and undercut by Iranian meddling. Unless he can find funds to rebuild wrecked cities, the angry and unemployed may again find purpose in jihadist ideology. If the country splinters further, if Iranian mischief precludes reconciliation, watch out.

We'll note this from yesterday's State Dept press briefing moderated by spokesperson Mark Toner (and conducted over the phone):

OPERATOR: And that’s from Laurie Mylroie with Kurdistan W-24. Please, go ahead.

QUESTION: Thank you, Mark, for taking my question. Can you explain what is being done to bring ISIS members to justice for the genocide against Yezidis? Amal Clooney spoke eloquently about that issue last week, and the UN Ambassador Haley said that the U.S. is committed – or she tweeted, “The U.S. is committed to bringing ISIS to justice, not just on the battlefield, but in the judicial system as well.”
So I want to know, what are you doing on this issue?

MR TONER: Sure. First of all, we’re appalled by the horrific acts being committed by ISIS against people from a wide variety of ethnic and religious groups in Iraq and Syria, and that includes, of course, the Yezidis. We’re working with these communities and the government – and the Government of Iraq to facilitate their safe return to their ancestral homes. That’s first and foremost.
And our ambassador to Iraq, for example, just completed a visit to Bashiqa in northern Iraq, where he met with Yezidi and Christian communities to better understand and assess their situation on the ground. We also, of course, welcomed the determination by the House of Representatives last year with respect to the genocide of Yezidis, and we stand with all the innocent victims of ISIS’s inhumanity. And we’re working with our partners – and this can’t be underscored enough – we’re working with our partners around the world to defeat ISIS and destroy ISIS and eradicate it from both Iraq and Syria and wherever else it extends its tentacles to.
We’re also continuing to strongly support efforts to collect, document, preserve, and analyze the evidence of atrocities, and do all that we can to see that the perpetrators of these atrocities are held accountable. And as I said, that starts with eliminating, defeating ISIS both on and off the battlefield.
I’m going to end there, guys. Thanks so much for joining us and have a great afternoon.
Toner had a really nice way of saying: Amal Clooney doesn't know what the hell she's talking about.
Reminder, not only has Anal Clooney not been voted into a US government position by any group of American citizens, she also hasn't been appointed to one by the US government.
More to the point, she's only American -- dual citizenship -- actually, she has triple citizenship -- by her recent arranged marriage.
In other words, she needs to stop attempting to speak on behalf of the American government.
The following community sites -- plus Cindy Sheehan -- updated: