Go readKat's review "Kat's Korner: Diana Ross releases a masterpiece (belatedly)" of DIANA ROSS SINGS SONGS FROM THE WIZ -- Diana's latest Motown album -- one recorded for a 1979 release but only now released -- and only released in digital form to be downloaded.

A Times story headlined “Obama Privately Tells Donors Time Is Coming to Unite Behind Hillary” had Obama telling DNC high rollers to “come together.” In it Obama “didn’t explicitly call on Sanders to quit” but a “White House official” confirmed his “unusually candid” words. It was a plant dressed up as a scoop. Obama spoke not privately but on background, and not to his donors but through them (and the paper) to his base. It was a different portrait of Obama as unifier: political, financial and media elites, all working as one to put down a revolt.

Sanders often says he took on “the most powerful political machine in America,” by which he means the Clintons. He’s really fighting the whole Democratic Party: White House, Congress, DNC, elite media and, sad to say, national progressive groups. That includes organized labor but also nearly every liberal lobby in town. He’s been a more constant friend than Hillary Clinton to almost all of them — but he must face and defeat them all. That he’s done so in 14 states — 15 counting Iowa-and fought four more to a draw is a miracle — and a sign their days are truly numbered.

It's another strong piece by Curry.


Haider al-Abadi is the current prime minister of Iraq.  He was installed by US President Barack Obama in August of 2014.

He hasn't been very successful.

He was supposed to come up with a political solution to address the country's various crises but he's been unable or unwilling to do that and Sunnis continue to feel persecuted because . . . they are being persecuted.

But Haider ignores that and so much more.

Mainly, he ignores the Constitution.

He took it upon himself, for example, to declare that Iraq had no vice presidents -- supposedly ousting three people out of their jobs.

But they still haven't been removed.  And it was really against the Constitution to go about it the way Haider did.

This time he wants to dispose of the Cabinet of Ministers and replace them with a new set of nominees.

That notions has already run into hiccups -- see Saturday's snapshot.

Parliament's declaring that they will vote yes or no on his nominees . . . in batches.

Not all at once as he'd hoped.


Other problems he's facing include talks of a coup and, more recently, talk that a foreign government is eager to see him replaced.


ALSUMARIA reports Ayad Allawi is denying reports that during his visit with Frank Baker, the British ambassador to Iraq, the two discussed the need to replace Haider al-Abadi as prime minister.

That Allawi had to deny it says a great deal about just how believable the rumor is.

Baker himself Tweeted the following today:


Today, Iraq has been slammed with several suicide bombings.

CATCH NEWS notes, "In one incident, a suicide car bomb killed five in Basra, the largest city in Iraq, while five others were killed when a convoy of the Popular Mobilization Force (PMF) was targeted in Mashahdeh town of Baghdad."  They note over 60 injured in the bombings while AP counts 29 dead.


Baghdad, 01 April 2016 – A total of 1,119 Iraqis were killed and another 1,561 were injured in acts of terrorism, violence and armed conflict in Iraq in March 2016*, according to casualty figures recorded by the United Nations Assistance Mission for Iraq (UNAMI).

A total of 544 members of the Iraqi Security Forces (including Peshmerga, SWAT and militias fighting alongside the Iraqi Army but excluding Anbar Operations) were killed and 365 were injured.

The overall casualty figures are up from the previous month of February, where a total of 670 were killed and 1,290 were injured.

The Special Representative of the United Nations Secretary-General (SRSG) for Iraq, Mr. Ján Kubiš, expressed his deep concern at the continuing violence and loss of life and injury in Iraq.

“I am extremely disturbed at the continuing loss of life and injury as a result of terrorism, violence and armed conflict. It is totally unacceptable that civilians should bear the brunt of violence,” Mr. Kubiš said.

“My hope is that the proposed reforms will be implemented and will lead to an eventual normalcy in this beautiful country”, SRSG Kubiš added.

According to information obtained by UNAMI from the Health Directorate in Anbar, the Governorate suffered a total of 201 Civilian casualties (64 killed and 137 injured). Figures are updated until 30 March, inclusive.

* CAVEATS: Figures for Anbar are updated until 30 March, inclusive. In general, UNAMI has been hindered in effectively verifying casualties in conflict areas. Figures for casualties from Anbar Governorate are provided by the Health Directorate and are noted below. Casualty figures obtained from the Anbar Health Directorate might not fully reflect the real number of casualties in those areas due to the increased volatility of the situation on the ground and the disruption of services. In some cases, UNAMI could only partially verify certain incidents. UNAMI has also received, without being able to verify, reports of large numbers of casualties along with unknown numbers of persons who have died from secondary effects of violence after having fled their homes due to exposure to the elements, lack of water, food, medicines and health care. For these reasons, the figures reported have to be considered as the absolute minimum.


And the US Defense Dept announced/claimed:


Strikes in Iraq
Fighter and remotely piloted aircraft conducted 10 strikes in Iraq, coordinated with and in support of Iraq’s government:

-- Near Baghdadi, a strike destroyed an ISIL vehicle.

-- Near Kisik, a strike suppressed an ISIL tactical unit.

-- Near Qayyarah, a strike destroyed an ISIL weapons storage facility and an ISIL staging facility.

-- Near Sultan Abdallah, a strike struck an ISIL tactical unit and destroyed an ISIL supply cache.

These bombings began in August of 2014 and have continued daily ever since.


As peace 'leaders' in the US struggle to find their voice, the hawk side of the equation is at no loss for words.

US House Rep Ed Royce is the Chair of the House Foreign Affairs  Committee and he has a new column arguing for more military action in Iraq and Syria:


In December, we passed legislation – which is now law – to help strengthen our Visa Waiver program and ensure that foreign fighters who’ve traveled to Syria and Iraq do not have easy access to the U.S. And recently, I successfully pressed the administration to apply extra scrutiny to individuals traveling to and from Libya. This is especially critical given that an estimated 5,000 Europeans have traveled to fight on the front lines with ISIS in recent years.
We’ve also passed legislation to require the administration to step up efforts to combat ISIS’ use of social media, declare ISIS atrocities against Christians and other religious minorities genocide, and – just last week – we passed common-sense legislation to help improve border security by establishing minimum standards for foreign countries at airports and other points of entry.
Of course, we still have much more work to do. Especially as we are facing an enemy that is technologically sophisticated and always evolving. So I’m advocating for strong policies that give our pilots and special forces already on the ground the flexibility they need to ensure terrorists have no sanctuary. I’m also continuing to press the administration to get desperately needed weapons in the hands of the forces in Iraq and Syria – including the Kurds and Sunni tribes – that have been most effective in fighting ISIS, and step up training of African forces.

Ultimately, however, it is the president who must lead the fight to defeat and destroy ISIS. President Obama is the commander in chief. Instead of offering up tired half-measures, he ought to be working with Congress on a new approach.


As long as the peace 'leaders' in the US stay silent and refuse to call for diplomacy and for Iraq to craft a political solution, the only option the American people are being offered is war, war and more war.


The hawks will win by default.


Ed Royce was in Iraq today as Haider al-Abadi noted: 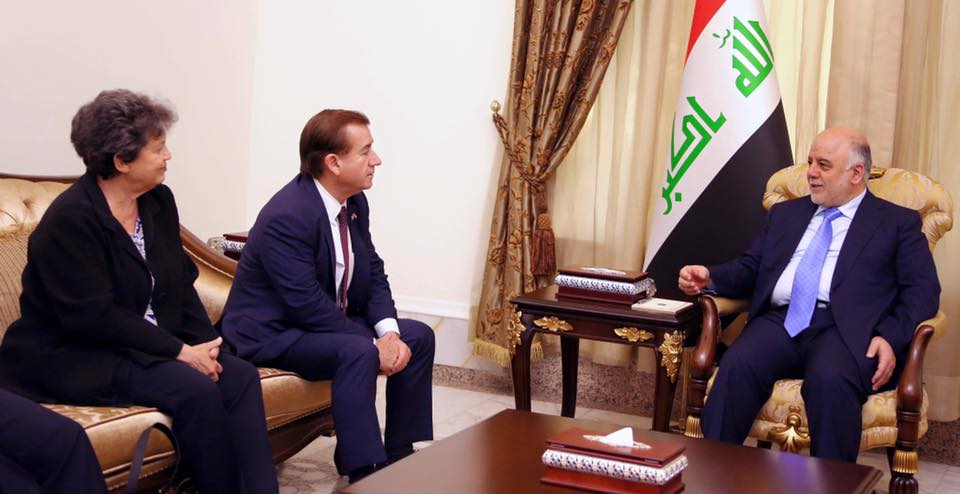 Everyone's been Tweeting it would seem.  But some have Tweeted about more important things.

Vice President Ayad Allawi Tweeted a call for the quick liberation of Falluja.  He also noted liberating Falluja does not mean destroying its homes or leaving the people the victims of hunger or thirst.


At least someone can note the people of Falluja.