How in the world did we end up here?

In November, the U.S. will vote on a president.

That is seven months away.

Hillary Clinton could get it.

The one whom Lisa Lerer and Emily Swanson (AP) report on, opening with, "Fifty-five percent of Americans say they have a negative opinion of Democratic presidential front-runner Hillary Clinton."

That is a winning candidate?

Over half of Americans have a negative opinion of Hillary Clinton and she could be the nominee?

How disgusting is the party leadership that Ms. Clinton is one of the best they have to offer?

Friday, April 8, 2016.  Chaos and violence continue, the denial regarding the Iraq War gets some attention, a member of the US Congress lives in his own little special world, war hawk Hillary gets called out for big money campaign corruption, and much more.


Cynthia M. Allen does, specifically she remembers what US President Barack Obama said that day:  "I said I'd end the war in Iraq.  I ended it."

At THE FORT WORTH STAR-TELEGRAM, Allen writes:

On March 19, Staff Sgt. Louis F. Cardin, 27, was killed during an Islamic State-launched rocket attack in Iraq.
According to reports, Cardin, of California, and several other members of his unit came under enemy rocket fire at a base in Makhmour, southeast of the Islamic State-controlled city of Mosul, very near the front line.
He was the second U.S. troop to die in combat in the current campaign.
Competing for news coverage with what is probably the most theatrical campaign season in recent memory, the young Marine’s death garnered a paltry amount of media attention.
It should have earned more.
It was a reminder of the battle that continues in the Middle East, where U.S. troops are still at risk.
It was also a stark admonition that more than four years after the last convoy of U.S. soldiers departed from Iraq and years after President Barack Obama repeatedly credited himself with “ending” the war, the U.S. — quite predictably — is back in Iraq in a big way.


It's a reality some struggle with facing.

As noted in Wednesday's snapshot, the US government is planning more bases in Iraq.  Combat, boots on the ground, bases, some struggle to face this reality. 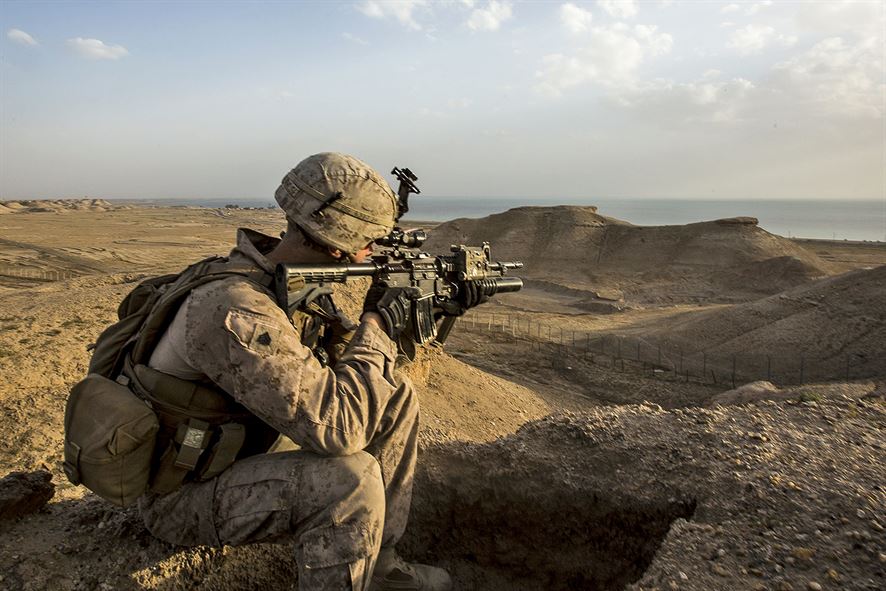 Even with the US Defense Dept Tweeting images like that from Iraq, some struggle to face reality.

Some in Congress struggle too.

Take US House Rep Tim Ryan.  He just returned from Iraq but seems to struggle with what he witnessed.  Kristina Wong (THE HILL) reports:

The U.S. has pushed current Iraqi Prime Minister Haider al-Abadi to undertake political reforms to allow for more Sunni autonomy and representation, but progress has been slow.
Ryan said he did see some signs of reform.
"The prime minister wanted to completely retool his Cabinet because there was a huge protest outside of the compound — Sunni-led — and he is offering now to retool his Cabinet," Ryan said.
"The fact that he said he was going to redo his Cabinet, I think, was a fairly good sign that he's opening up and understanding that the Sunnis really have to have buy-in, and these chiefs and these Sunni leaders have to have buy-in," he said.
What?
The Sunni-led protest?
Does he mean the rallies (of support) Moqtada al-Sadr led outside the Green Zone?
That would be Shi'ite cleric and movement leader Moqtada.
He called on his (Shi'ite) followers to rally in support of 'reforming' the Cabinet.
As for the redoing of the Cabinet, Sunni leaders generally have objected to this and see it as a way to weaken their voice -- the voices of all minorities in Iraq.

He wants "to completely retool his Cabinet because there was a huge protest outside of the compound -- Sunni led"?

That's not what Haider al-Abadi did said when he gave an interview to MIDDLE EAST MONITOR:


Abadi has been accused of undermining democracy and “leading a coup” against Iraq’s power-sharing political structure that has been in place since 2003, which guarantees a certain number of political positions to the country’s Shia, Sunni and Kurdish blocs.
But Abadi told Middle East Eye in a phone interview that rival political blocs had not responded to his request for them to nominate their preferred independent candidates for cabinet posts last month.
He also said that the call for an independent cabinet had come from Moqtada al-Sadr, the influential Shia cleric who last week threatened to raid Baghdad’s fortified Green Zone unless his demands for political reform were met.
[. . .]
“It was Sadr who demanded a government of technocrats, in which everyone is independent except for the prime minister. It was not my demand.”

So where in the world is US House Rep Tim Ryan getting the ridiculous idea that Haider al-Abadi's doing anything about this because of Sunnis?

The persecution of the Sunnis continue.


Meanwhile the bombing of Iraq continues.  The US Defense Dept announced Thursday:

-- Near Baghdadi, two strikes struck an ISIL tactical unit and destroyed an ISIL fighting position and a cache of ISIL improvised bombs.

-- Near Rutbah, a strike struck an ISIL tactical unit.

-- Near Kisik, a strike destroyed an ISIL tunnel system.


Meanwhile, as a member of the US Senate, she helped bring you the Iraq War.  As President of the United States, she'd bring you so much more destruction.  Yes,  in the United States War Hawk and pig at the trough Hillary Clinton continues to vie for the Democratic Party's presidential nomination against Senator Bernie Sanders.


Thursday, former US President Bill Clinton attempted to help his wife.  In doing so, he actually made the 2008 charges that he was racist seem true.

In other embarrassments for Hillary, she's accused of being just another rotten candidate benefiting from the Supreme Court's Citizen United decision.


Indeed, a Center for Public Integrity investigation reveals that Clinton’s own election efforts are largely immune from her reformist platform. While Clinton rails against “unaccountable money" that is “corrupting our political system,” corporations, unions and nonprofits bankrolled by unknown donors have already poured millions of dollars into a network of Clinton-boosting political organizations. That’s on top of the tens of millions an elite club of Democratic megadonors, including billionaires George Soros and Haim Saban, have contributed.

Far from denouncing their support, Clinton has embraced it, personally wooing potential super PAC donors and dispatching former President Bill Clinton and campaign manager John Podesta on similar missions.
Several of the big-money groups crucial to the Clinton-for-president effort are led or advised by one man, Clinton scourge-turned-disciple David Brock, who’s also seized control of — and defanged, former staffers say — a prominent, nonpartisan watchdog group that helped lay groundwork for what’s become the Clinton email server scandal. Each of the groups plays a specific role, from advertising to opposition research, in bolstering the Hillary for America campaign committee Clinton herself leads.
Clinton’s campaign argues it “cannot afford to unilaterally disarm” and quit the big-money game. That, they say, is because powerful conservative interests, most notably the secretive outfits backed by billionaire brothers David and Charles Koch, plan to support the Republican presidential nominee with hundreds of millions of dollars. Republican front-runner Donald Trump, himself a billionaire, is burning his own wealth as campaign fuel.
“When she is elected president, Hillary Clinton will make it a priority to restore a government of, by and for the people,” spokesman Josh Schwerin told the Center for Public Integrity.
Not satisfactory, say some prominent liberals, whose reactions range from underwhelmed to apoplectic.
They cite Bernie Sanders as proof a Democratic presidential candidate can contend in elections mostly on the strength of small-dollar donations — and without cultivating support from super PACs and billionaires.
Clinton’s supposedly reform-minded campaign, they continue, has instead tolerated, if not encouraged, a Democratic operation akin to what the Koch brothers have wrought.
“It’d be like tobacco companies coming out and saying they wanted to fight against lung cancer,” said Dylan Ratigan, the former MSNBC television host and author of New York Times bestseller Greedy Bastards, who hasn’t yet endorsed a presidential candidate. “In a way, the Koch brothers have more credibility than Clinton on election money issues — they’re at least upfront about how they want to use money to buy politics.”