I noted that documentary last month.  It was produced by the ABC outlet in San Francisco and it is very impressive.  I am noting it again because Rachel e-mailed and said it was too important and needed to be noted again in the new year.

Monday, January 17, 2022.  Julian Assange remains persecuted, the western press continues to ignore the attacks on Iraqi women and girls, and much more.

As THE DAILY DEBRIEF notes, the persecution of Julian Assange continues.

Antoine Vey, lawyer for Julian Assange: “This case is above all political, not legal, nor judicial”

happynebula.com
Antoine Vey, lawyer for Julian Assange: “This case is above all political, not legal, nor judicial”
8:20 AM · Jan 17, 2022

They're saying, in Italian, that they want to support Julian for showing the kind of courage they wish they had and to get the word out.

All of the crooks responsible for the murder of over a million Iraqis and none of them facing a tribunal, some of them (Tony Blair) receiving honors?  And Julian Assange, who told the truth, is the one threatened?

"The world's just inside out and upside down" indeed.

And I got into an argument over the above because I dictate the snapshots and I said, just grab the lyrics online, third verse.  And then they're read to me and those are not the lyrics.  GOOGLE is not always correct.  They'd mispelled "Majaraj" and they'd added words ("turned" was added to "The world's just inside out and upside down," etc.)  I said hold on, when I get off the treadmill, I will go to the music room and grab the sheet music but I am right on this.  (And I was.)

Something's are clear cut, some are less so.

MINT PRESS NEWS has a brodcast by Seyed Mohammad Maradni that we will not post here.  I have no interest in lies.  Yes, Soleimani was a terrorist.  That said, I've reposted Richard Medhurst's defense of him.  I didn't listen to it, but I posted it.  I'm not surprised we disagree.  But the description for Seyed's pice goes on about how "Western media largely sided with the U.S. after Trump's deicision to kill him.  Suddenly, Soleimani was no longer a hero" blah blah bulls**t and then they cite CNBC.

I'm not in the mood for your lies and garbage.

Soleimani was hailed by the US media.  Andrea Mitchell embarrassed her damn self and people asked her what the hell she was doing?  Good.  They needed to.  And she wasn't alone.  The Hate Trump Fever was so great that the US media treated Soleimani like a hero and a great person.

Unlike Andrea and the MSNBC goons, I don't really care who's president -- not to the point of lying.  I'll make the same call regardless of who is in the White House.

Unlike Seyed, I don't lick the taint of any government.

I will always side with the people.

By the way, there have been e-mails to the public account about how I am against Daniel Ortega.  I don't know  where this crap starts.  Nicaragua is not our focus here.  I don't write about it.  I have posted THE CONVO COUCH's many videos on the election.  Equally true, I know Daniel and have spoken to him many times over the years -- I've known him since back when the US government was supporting the crooked contras (and that's only one reason, I hate that fat ass on THE VIEW).  We honestly don't discuss politics when we talk.  We discuss music.  That's music native to his country (I spent a lot of time in that area) and that's music native to here.  Do you know who one of his favorite US artists is?  She's already popped up in the snapshot.  Yes, Carly Simon.

Anyway, I will always stand with the people.  And you can make a hero out of whomever you want but when your hero has terrorized the Iraqi people and done so for years and we have documented it here, don't expect me to stick my tongue on your government of choice's taint.

I don't give a damn about any government.  I care about the people.  And the victims of his terrorist acts in Iraq will always have my sympathies.

Too many people are too immature and they're desperate for heroes (I'm not) so they back themselves into a corner and there's no way out for them.  My way out is simple.  I support the people.  I'm not interested in glorifying politicians -- most are psychopaths or ego maniacs.  The 'normal' ones rarely do anything of real value for the people that they are supposed to serve.

I enjoy Richard Medhurst's program and I find him a very smart person. Doesn't mean we can't disagree and it doesn't mean that a disagreement results in "write him off!"  He is honest and upfront -- unlike Susan ("Medea") Benjamin and her ilk who seems to confuse peace with being pro-regime of whatever country the US is at war with.  Or the faux 'resistance' who confused their hatred for Donald Trump with an actual political position.

An alliance of the two largest Sunni blocs in the Iraqi parliament condemned yesterday the repeated attacks on its leaders and their offices and called for the perpetrators to be prosecuted. The alliance is between Takaddom led by former Speaker of Parliament Muhammad Al-Halbousi, and Al-Azm led by businessman Khamis Al-Khanjar.

The two parties called for the "terrorist group" to be held accountable for the attack on the office of Sheikh Abdul Karim Abtan MP without delay. "Using these criminal methods to change our way forward will not succeed," they insisted, "and will not deter us from our objectives to build a strong, sovereign state without suspicious agendas, free of terrorism and easily available weapons."

Well I guess they'd -- finally -- have to, wouldn't they?  First of all, everyone -- including Shi'ite Nouri al-Maliki -- weighed in on Friday.  It's days later and they're finally weighing -- after rumors on social media have increased -- rumors that they took part in the bombing and did so because they saw Takaddom as a sell out to the SUnnis because of overtures being made to Moqtada al-Sadr.

Yeah, I guess they'd have to issue that statement.

In other news, BOLLY INSIDE reports:

The Iraqi security forces, a Turkish military installation in Zlikan, northeast of Mosul, has been targeted by rocket fire for the second time in two days. “Three missiles landed northeast of Mosul, near the Turkish base. Turkish artillery retaliated with a barrage of shells .”

No Turkish soldiers were hurt in the incident. Two Katyusha rockets were also launched against the Turkish Zlikan base’s surrounds on Saturday.

The presence of Turkish troops in the Zlikan camp has been a topic of long-standing controversy between Baghdad and Ankara, which justifies its presence in the region as a need to fight the Kurdistan Workers’ Party outlawed in Turkey.

Exactly what other countries can Turkey invade and occupy and get away with it?  I'm just wondering since the world has repeatedly elected to look the other way at these war crimes and these violations of Iraq's national sovereignty?

When not invading Iraq, the Turkish government denies it water.  That's a major issue as climate change worsens.  PBS' THE NEWSHOUR reported on climate change in Iraq over the weekend.  Excerpt:

Winding down, last night, I wrote the following:

One piece I did for the community newsletter that I would've loved to have repeated here was about Nouri Tweeting -- as he backed the legal challenges to the October 10th vote -- that the vote, as it was, wasn't fair to women because it didn't meet the quota set aside for women.

As I noted, that was hysterical from the man who couldn't find women to put in his Cabinet in his second term, a prime minister who even made a man (Hoshyar Zebari) the Minister of Women's Affairs.  Yet in December of 2021 -- eleven years later -- wants to lament the lack of representation for women in Parliament?

I covered it in a gina & krista round-robin back in December.

Did you see anyone in the press eve r cover it?  Nope.  A) Women don't matter to the western press.  B) The press doesn't know history about Iraq -- or doesn't care to share it.  So it wasn't covered by the western media.

A man writes to the public e-mail account (common_ills@yahoo.com) to inform me that the western press cares "only about women.  You stub your toe and we have to hear about it for four weeks."  Oh, how interesting it must be in your tiny mind.  Reality, the bulk of what happens to women, crimes against women, are never noted or explored.  Don't confuse mass media attention to some White female celebrity with attention to women.

If you're still not getting it, RUDAW's Layal Shakir Tweeted:

A female university student in Baghdad committed suicide after her father assaulted her in front of her classmates, beating her in public for telling her mother that he married another woman. She ended her life on the same day. #Iraq
1:00 AM · Jan 16, 2022

Tell me which western outlet reported on it?  It took place Baghdad -- which is really the only city that western reporters and stringers occupy in Iraq.  Did Jane Araf report on it?  No, The Whore of Baghdad never reports on things like that.  So stop pretending that the western press gives a damn about women.

Maryam Al Rukabi?  Last month, only AFP (of western outlets) covered her story.  A man was obsessed with her.  She didn't love him and her parents told him she was too young to marry.  He broke into her home and poured acid on her face.   For those who make the mistake of trusting western media, we'll note Rasha al-Aqeedi Tweet again:

Ok, Twitter. We need your help. This beautiful young woman from Iraq Maryam Al Rukabi refused a marriage proposal. The suitor invaded her home at night and attacked her with acid. He is still free. With enough pressure and international attention, some justice could be brought. 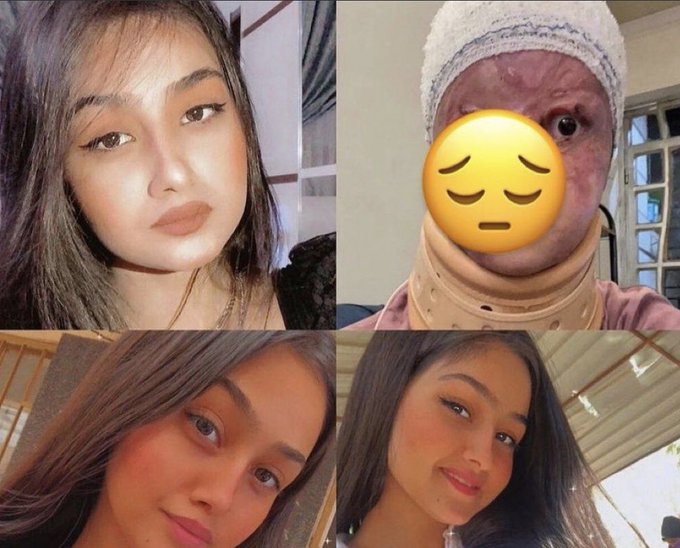 She's sixteen years old and she was attacked for refusing to marry an adult male.  He broke into her home and poured acide on her.  You can also refer to Mustafa Goran (RUDAW) for more.

Again, this was an attack in Baghdad -- home of the western press.  And, again, they ignored it.  This isn't news to them.  That says a great deal about what they endorse and encourage with their silence.

Just walking along, shopping for food
Stepping out of the line of fire when people are rude
Cheap stuff made in China, someone calls it a sale
Somebody's mama, somebody's daughter
Somebody's jail

Beat down in the market, stoned to death in the plaza
Raped on the hillside under the gun from LA to Gaza
A house made of cardboard living close to the rail
Somebody's mama, somebody's daughter
Somebody's jail


And I feel the witch in my veins
I feel the mother in my shoe
I feel the scream in my soul
The blood as I sing the ancient blue
They burned in the millions
I still smell the fire in my grandma's hair
The war against women rages on
Beware of the fairytale
Somebody's mama, somebody's daughter
Somebody's jail

-- "Somebody's Jail," written by Holly Near, first appears on her album SHOW UP.