Another great episode of THE CONVO COUCH.  Noam Chomsky is an embarrassment (he is actually worse than that).  If it were just dementia or age, I would look the other way (I am not spring chicken myself).  But he is vile and disgusting.

We do not institute two classes of people in the United States and shame on anyone who says otherwise.

The demonizing of one group is appalling to me.  I grew up, as a Jew, fully aware of how we were demonized by the Nazis.  Mr. Chomsky is a huge disappointment and he winds his life down spreading hate when he could have been offering love.

Thursday, October 28, 2021.  Still waiting on election results . . .
Let's start with this video report from ALJAZEERA.
Iraq voted October 10th.  It's October 28th.  The final count?  Still waiting.
Ooh, I'm waiting
Ooh, still waiting
I'm just a fool
Ooh, I'm a fool
I'm just a fool to keep waiting
To keep waiting
-- "I'm Still Waiting," written by Deke Richards, recorded by Diana Ross for her EVERYTHING IS EVERYTHING album (and a number one hit in the United Kingdom)
Still waiting.  At this rate, we'll be listening to Diana's long awaited studio album THANK YOU (drops November 5th) before the final results of Iraq's election are in.
For any who've forgotten, Iraq's electoral commission made a point to make a promise -- one no one was asking for -- that they'd have the votes all counted and the tallies released . . . October 11th.  It's now October 28th.  Still waiting.
The recount taking place right now is focusing on 300 ballot boxes.  Should any significant differences be found, it would trigger a much wider recount.
Still on the elections, BAS NEWS Tweets:
Protests continue in the Iraqi capital to reject the results of the parliamentary election held on October 10, media reports said. #Iraq | #Baghdad | #IraqElection2021

basnews.com
Protests against Election Results Continue in Baghdad
Protests against Election Results Continue in Bagh
7:29 AM · Oct 28, 2021
The results, or 'results,' are contested at this point.
RUDAW notes:
Iraq’s next elected officials in Nineveh aim to present a unified front in parliament that represents the Sunni governorate, a member of the Taqadum Coalition told Rudaw on Tuesday.

“We will try to unify the vision of Nineveh candidates this time so that we go to the Iraqi parliament as a strong Nineveh parliamentary lobby” with a single vision, Muzahim al-Khayat said at an interview with Rudaw’s Bestoon Khalid on the sidelines of the Middle East Research Institute (MERI) forum in Erbil.

The coalition aspires and seeks to build an “institutional civil administration” in all its sectors in Nineveh, he added.

Iraqis headed to the polls in an early vote on October 10. The election was held in response to Tishreen (October) 2019 protests complaining of corruption and ineptitude among the ruling class and political system. Turnout was a record-low 41 percent, reflecting voter disillusionment and mistrust in the country’s political system.
Mosul is the capital of Nineveh.  Mosul is among the cities seized by ISIS in 2014.  It was occupied by the terrorist organization for years before they lost their hold on it.  ISIS was not, however, vanquished from Iraq.  From yesterday's snapshot:

Starting in Iraq, REUTERS reports, "Islamic State militants killed 11 people including a woman on Tuesday in an attack on a village in Diyala province, east of Iraq, the country's Joint Operations Command said in a statement."  Is it ISIS?  It may be.  ISIS has never been vanquished.  And the reasons ISIS took root in Iraq were never addressed.  If the issues continue to go unaddressed, ISIS will actually grow stronger.  AFP notes, "The attack on Al-Rashad in Diyala province left "11 dead and 13 wounded", a local security source said."  In a Tweet, Barham Salih, president of Iraq, states this was a cowardly attack   He calls for stronger borders and backing of the security forces.

Hundreds of villagers have fled their homes in Iraq’s eastern Diyala province amid rising fears of another violent sectarian conflict breaking out there following an Islamic State (ISIS) attack earlier this week.

On Tuesday night, ISIS attacked the al-Rashad village in Sharaban (Muqdadiya) town in Diyala, killing 15 civilians and wounding many others.

Al-Rashad’s population is primarily Shiite Muslim. Reports indicated that local villagers took up arms and attacked the nearby Sunni-majority village of Nahr al-Imam in retaliation the following day. They reportedly killed a dozen people and set fire to houses.

The attacks come despite the fact that Iraq has been actively arresting IS leaders over the last few months. The deputy leader of IS, the group's finance chief and many other prominent commanders are among those killed or arrested by the government.

After the Diyala attack, tribal men from the victims' families attacked the nearby Sunni village of Nahr Al-Imam, accusing them of betrayal and siding with IS.

According to security officials who spoke to Al-Monitor on condition of anonymity, approximately 3,000 fighters from the Bani Tamim tribe (from which the victims hail), supported by Popular Mobilization Units (PMU), surrounded the village of Nahr Al-Imam from all sides. They also destroyed and burned villagers' gardens and houses with bulldozers.

Many villagers escaped from the area and called on the government to protect them. Some were able to seek refuge in the mosques of Baquba, the capital city of Diyala, leaving all their belongings behind. This could lead the Sunni tribes to retaliate against Bani Tamim members and eventually to a tribal conflict within the Diyala province.

The militias are now part of the government security forces.  Were they acting on the orders of the Baghdad-based government?  (No, they weren't.)  When does the punishment come for this action?  When does someone show leadership and not cowardice?  The militias never should have been folded into the security forces.  Never.  But they were.  They better be broguht to heel or forget a better Iraq.
Clearly, Mustafa al-Kahdimi can't control them and is too scared to try.  (Not after they circled his home last spring.)  He's a coward.  And now the militias openly attack a village and nothing will be done.
Let's note this Tweet:
The US & International community are silent on the ethnic&sectarian cleansing in Iraq . Bader militias and Iranian backed militias committed crimes against Sunnis in Diayla today.They are desperate after the poor results in the election&creating chaos to justify Hashed presence! 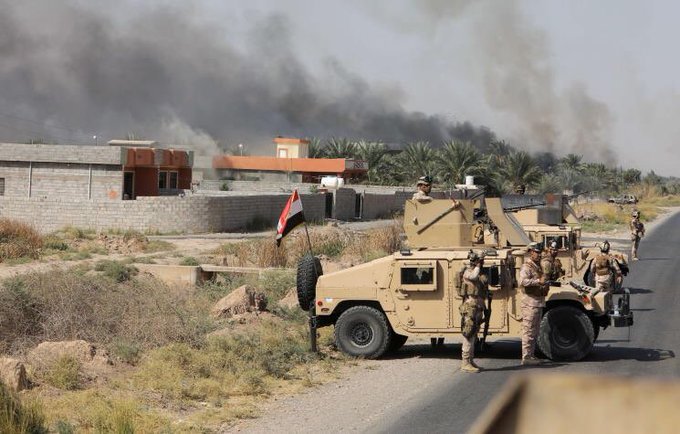 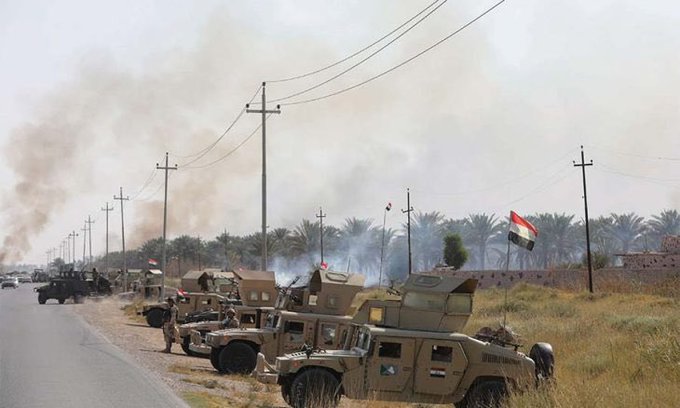 9:22 PM · Oct 27, 2021
The US & International community are silent on the ethnic&sectarian cleansing in Iraq . Bader militias and Iranian backed militias committed crimes against Sunnis in Diayla today.They are desperate after the poor results in the election&creating chaos to justify Hashed presence!

9:22 PM · Oct 27, 2021
And this one.
Almost all civilians from Alimam village - Muqdadyia, Diayla fled their village to seek refuge in the surrounding villages. They are hosted in mosques and schools etc . Hadi AlAmiri and Qassim AlAaraji visited the aftermath of the attacks but did nothing the stop them. 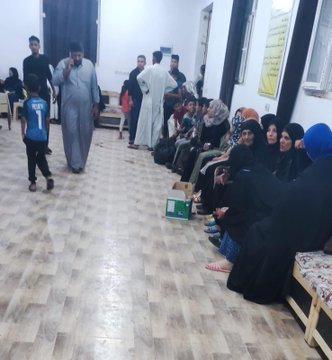 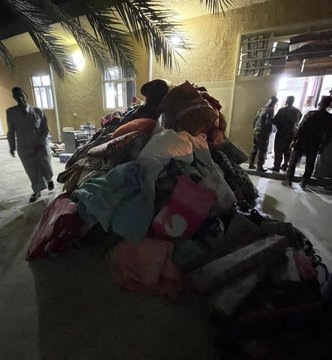 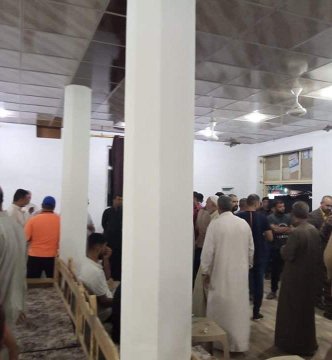 9:31 PM · Oct 27, 2021
Terrorist organizations carry out terror -- hence, the name.  The security forces are not supposed to do the same.  A line was long ago crossed and the world doesn't want to acknowledge it apparently.  So the suffering continues and does so with a global shrug.
US forces do not need to be on the ground in Iraq supporting a government who allows its own security forces to terrorize a village.
Turning to the US, where was Fauci?  NEWSWEEK reports:

A homeless Iraq War veteran's service dog was allegedly tased by police while her owner was being arrested for panhandling, leading to a series of events that ended in the dog's death.

Gastonia, North Carolina police officers encountered veteran Joshua Rohrer and his dog Sunshine, who was trained to help him cope with post-traumatic stress disorder caused by his time in the Army National Guard, after responding to a call about alleged panhandling.

Witnesses told WCNC in Charlotte that police officers got violent with Rohrer shortly after arriving at a median on October 13 where the veteran and his dog were seated.

“The cop demanded his identification,” stated witness Justyn Huffman. “He couldn’t move fast enough, so he reached into his pocket for his ID. He was slammed against the automobile. He was placed in handcuffs.” Sunshine, according to Huffman and two other witnesses, jumped into action and bit one of the officer’s boots. Sunshine was allegedly hit with a stun gun by an officer, leading her to flee with one of the prongs still attached to her body.

“‘Don’t shoot the dog!’ we’re yelling from the rooftops. ‘Don’t shoot the dog,’ says the narrator “Huffman stated. “‘My dog! My dog!’ exclaimed [Rohrer]. They dragged him behind the police car and slammed him down on the pavement.” The 911 call that led to the confrontation was made public by police. A lady can be heard on the conversation asking if it’s “legal for an adult to be standing on the junction with a dog asking for money,” claiming that the scenario is “bullcrap,” and accusing Rohrer of “using the dog to gain money.” Rohrer, who fought in Iraq and Kuwait from 2004 to 2005, told Military Times that he was not panhandling but had accepted money without asking for it. He claimed that the police confronted him and arrested him “aggressively.”

I'm confused.  Homeless veterans?  Barack Obama pledged to end homelessness among veterans and we have a working press in hte US.  Surely, if he broke that promise, the press would have held him accountable, right?
(Wrong.  They made excuses as they always did.)
The following sites updated: