Although several long shot campaigns were mounted, President Donald Trump did not pardon any whistleblowers who were indicted or prosecuted under the United States Espionage Act. He also declined to pardon the only journalist ever to be indicted under the World War I-era law.

WikiLeaks founder Julian Assange and NSA whistleblower Edward Snowden were not offered clemency because Trump "did not want to anger Senate Republicans who will soon determine whether he's convicted during his Senate trial."

"Multiple GOP lawmakers had sent messages through aides that they felt strongly about not granting clemency to Assange or Snowden," according to CNN.

He did not and, honestly, I feel enraged.  Mr. Trump is the Deep Swamp no matter what he wants to pretend or state.  Someone who really wanted to shake things up would have pardoned Mr. Assange.

Donald Trump has left himself with nothing worthy of praise.  I guess, in that regard, he is not at all uncommon from the bulk of previous presidents.

Today, Donald Trump's presidency ends.  It was four years of turmoil and nonsense -- from the press and from Donald.  He came into office a petty man and he leaves it that way as well.  Despite repeatedly insisting he was a menace to the world, Nancy Pelosi and Congressional Democrats were more than happy to back any war funding or corporate give aways while pretending there was a significant difference between themselves and Donald.

He never rose above petty.  In fairness to him and his egomania, he never rose to the level of Great Satan that so many 'faux' resistance persons -- among the people, in Congress, in press -- tried to insist he was.

And he created jobs.

Take Carl Bernstein, a vile and disgusting man (I say that as a friend of the late Nora Ephron's) who got to pose and preen as some sort of journalist.  Watergate was decades ago.  Bernstein did one article on the CIA infiltration of US media after that and then moved on to writing bad prose (and having fits that his ex-wife's novel was turned into a film).  Garbage Bernstein wasn't interested in truth then, no.  He didn't want the children to know how disgusting and unfit their father really was.  But the Trump presidency allowed Bernstein to show up regularly on MSNBC and be treated seriously -- as long as he toed the party line and claimed that each scandal -- real or imagined -- was, wait for it, worse than Watergate.

No, they weren't.  And that only demonstrates what many have long known -- and what the film DICK parodied -- Carl didn't know a damn thing about Watergate.  Bob Woodward took him along for the ride.  He was the Oates to Bob's Hall, the Andrew to Bob's George Michael.  Carl clearly has no grasp of what Watergate was.  It wasn't just a break-in.  It was a conspiracy, an enemy's list and a hell of lot more.  It was government persecution of the American people.

But, again, Carl's not very smart and he has no life so he needed to be on TV.

So many scoundrels, so much cable TV time.

The four years ended like a really bad DC superhero movie -- in the end, the villain never lived up to the build up.

But he certainly was a wonderful distraction, wasn't he?

Allowing for members of Congress to grandstand and preen -- while they told the American people that, in a pandemic, corporations were entitled to billions but the American people only deserved about $150 a month -- that's what the only stimulus check that arrived prior to December 25th averaged out to.  It allowed them to desecrate the Constitution and continue wars around the world while pretending that they had some moral standing and/or ethics.

Now Donald's leaving and it's 'time to heal.'

How stupid do they think his supporters -- which includes nearly 75 million Americans who voted for him -- are?  There was no 'time to heal' after the 2016's election.  There were obstacles and hatred tossed out immediately.  The "honeymoon" period every new president traditionally gets?  Denied to Donald.

And now you have various whores ready to dance for their master.  Dickless Bruce Springsteen will trot around on a leash for Joe.  So will Jennifer Lopez.  I'm sorry, who in the world thinks Jennifer is a singer?  She was a dancer with a weak voice who had chart hits -- years and years ago.  As one desperate celebrity after another rushes to bow to empire, it becomes clear that the United States really needs some celebrities to announce that they won't perform at any presidential inauguariton -- no matter who is the president, no matter which party has the White House.  They whore themselves out.

Donald has millions of admirers to this day.  But he never managed to win over anyone not already for him.  That's because he's so damn petty.

He issued so may pardons -- including yesterday -- but not one for Ed Snowden.  Not one for Julian Assange.

Ed?  I'd argue history will judge him a hero.

Julian?  There's no arguing.  He needed to be pardoned -- both for himself and also for what a possible US trial could mean to the press -- destroying a free press.l

Had Donald the guts to pardon Julian, he would have had one historical note to applaud.

Instead, he's just a petty man who has no real accomplishments.  Cutting the troops in Iraq in half (officially, anyway)?  That's not getting all the US troops out of Iraq.

One historical moment -- and pardoning Julian would have been one -- would have allowed for some reconsideration of his presidency in the future.  How could he be so right about one thing (Assange) and so wrong about other things?

That would have led historians to look at the way the media treated him -- unfairly and it wasn't journalism.  But for a deep dive like that to take place and matter, there would be a need for historians to explore.  And Donald's pettiness ensured that they had no reason to explore what he did have to face.

Will Joe Biden face that?

It doesn't appear so.  The 'independent' press spent 2020 either ignoring Joe's scandals (the credible allegations made by Tara Reade; Hunter Biden under federal investigation) or dismissing them -- and usually dismissing them with what the campaign told them to say.

He's not going to seriously address the environment.  Possibly due to having one foot, an ankle, a calf, a knee and a huge portion of his upper leg already in the grave, Joe doesn't feel that climate change is an urgent issue.

His history of racism is appalling and maybe that'll take him down.  Barack Obama has repeatedly called out 'woke' culture and there's a reason for that: He himself couldn't have survived it had it been around when he was president.  His attacks on African-American fathers, for example, would have been loudly rebuked.  Can Joe survive "woke" America?

He already has his defensive line up, doesn't he?  People like Ryan Grim (glad you paid attention to the hair tip, Ryan, you almost look like a real boy), Betsy Reed, Naomi Klein and assorted others.  And right behind them, in the second ranks, you've got the nutless Kyle Kulniksi who will scrape and bow before power because that's what you do -- if you're a coward and a whore.  Demands?  No, no, no says nutless Kyle.  (Nuts does not invoke power in this paragraph -- I don't use that metaphor and never have.  I'm referring to Kyle's endless podcasts about his balls.  And after awhile, you have to start wondering if he can't stop talking about them because he really doesn't have them?)

The corporate press will likely go back to sleep and just spout the usual lines from government officials as fact -- the way they did long before Donald.

That's all that happened.

But garbage like Paul Mulshine serve up nonsense like "Donald Trump’s legacy: He turned Washington, D.C., into Baghdad, Iraq."  No, he didn't.  The riot that took place does not compare to the slaughter in Iraq.  The slaughter that continues today or the slaughter that left corpses in the street or the slaughter when the US backed the Shi'ite death squads that set out to 'cleanse' Baghdad.  Paul Mulshine is garbage because he wants to pretend that DC is Baghdad.  He has no idea what Baghdad became due to the US-led invasion.  It's insulting to the Iraqi people to pretend that DC has been turned into Baghdad.

But drama queens need their drama, don't they?  Sad because what journalism is supposed to offer is perspective and context.  We all survived without it for the last four years so maybe we'll make it through four more?

If you're in the national press and will be on TV at any point today and being to feel the need to weep joyously, just hold it in until you find a private place. Nobody is expecting any adversarial coverage over the next 4 years, but it's just a matter of personal dignity. 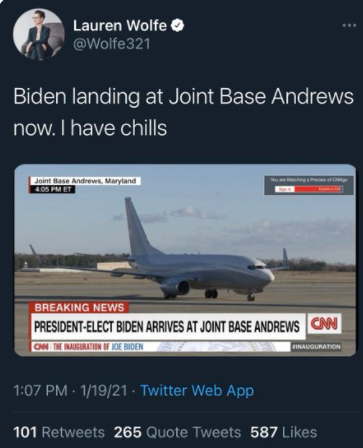 Ava and I did our TV piece on Sunday.  We didn't have time to update it.  We'll look over it at some point today and if it needs a note "This was written Sunday" we'll add that.  The following sites updated: