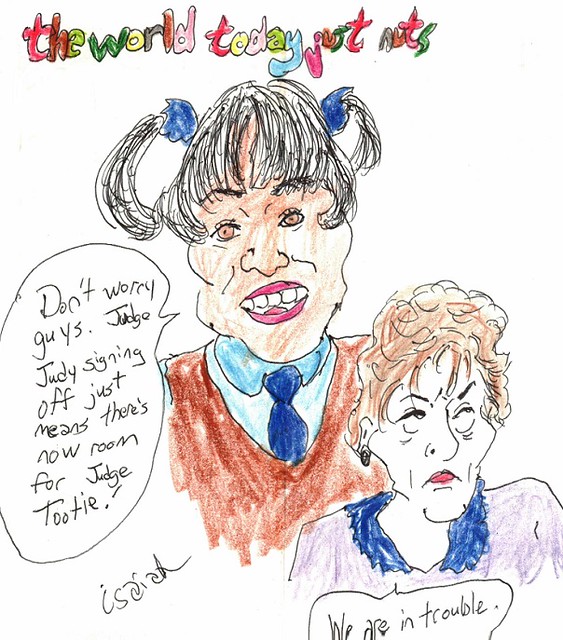 
READ: Full Executive Order 13526 Section 1.7 cited
@RichardGrenell
letter to
@MarkWarner
“in no case shall info..continue to be maintained as classified, or fail to be declassified... to conceal violations of law...(or) prevent embarrassment to a person, org, or agency.”
@CBSNews 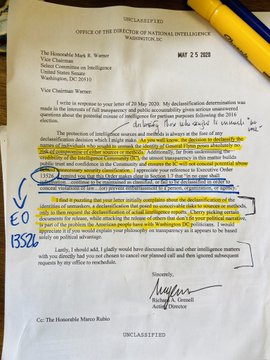 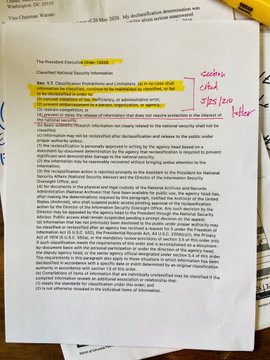 If you go to the Tweet, she has reproduced the letter from Mr. Grenell to Senator Warner and it is not good for Mr. Warner.


I saw that on Zach Haller's Twitter feed and I want to note this Tweet from Mr. Haller:


This should not be happening.  Everyone responsible should be put behind bars.  This is a betrayal of trust, of justice, of just about everything we are supposed to believe in.  Mr. Floyd would be alive today if the police had done their job.  Instead, he is dead because of them.

Fiorella Isabel and Tina-Desiree Berg initiate a conversation on sexism among the left.  It's an important conversation that addresses the attacks on Tara Reade, the hypocrisy of so many and the embrace of rape culture as some rush to bury Tara Reade.  Tara has accused Joe Biden of assault.

"He's going through every victim shaming trope that ever existed," Tina-Desiree Berg notes of the hideous Michael Tracey.

It's an important conversation.  It's one the press could have contributed to but instead the bulk of them chose to attack the victim and the small number who did originally want to report walked away the minute Joe Biden's campaign to make Tara 'toxic' was put in place.

They can't shut up about Ronan Farrow -- these same people.  I don't think Ronan's in danger of losing his post at THE NEW YORKER.  I don't believe people are rushing to return their copy of his book.  Ronan's journalism stands or doesn't.  But these people, these same people, want to rush forward to spend time defending Ronan while acting like Tara no longer exists.  Ryan Grim and Rich McHugh, I'm especially looking at you two.

It's especially bad for Ryan Grim.  He's with THE INTERCEPT which already has a bad image for the treatment of sources.  Ryan's the one who broke this story.  And now that the source is being beaten up by the corporate media, where's Ryan's reporting?

Ryan's standing by while Tara is victimized by the media after he set the whole thing in motion.  Don't think I'd ever choose Ryan for any story I wanted to break.

Democrat "squad" member Ilhan Omar says she believes sexual assault allegations against Joe Biden but would vote for him anyway to defeat Donald Trump.
In a Tweet defending her support of accuser Tara Reade, the Minnesota congresswoman said that "believing survivors is consistent with my values".
"With that said, in this interview I did on 6 May, we talked about that and quotes aren't always in context. I will vote for him and help him defeat Trump," she said.

@llerer
and the #NYT plan on twisting their minds. Now you can all see their tactics & how far they will go.

There’s an imbalance btw the amount of scrutiny happening around #TaraReade truthfulness vs that of #Bidens. Biden’s history of untruthfulness is documented, recorded. Undeniable. But is never brought up for review in light of this accusation. That’s the process of rape culture.

Ibrahim al-Zobeidi (THE ARAB WEEKLY) does more to address Joe's record on Iraq than any US outlet has done in the last year:

A Biden victory will launch a new episode of the American-Iranian romance. His administration will soon lift or reduce the sanctions against Iran and may even release its frozen assets in the US worth billions of dollars, and perhaps in Europe as well. That’s when Iran completely recovers its former capacity to finance its proxy armies of mayhem, kidnapping and embezzlement, and move them according to its plans.
When Joe Biden was just a senator for the state of Delaware in 2006, and not yet vice-president, he proposed dividing Iraq into three semi-autonomous entities for the Shia, Sunnis, and Kurds.
Following his presidential victory in 2009, Obama made this same Biden vice-president and charged him with the Iraqi file. The latter stuck to his stupid, short-sighted and poisonous proposition for Iraq and happily became a close connection between his boss, Obama, and the Iranians in Iraq and their proxies and militias, openly and unabashedly.
Biden’s vision became reality in 2010, when he managed to impose Nuri al-Maliki as prime minister, despite the crimes the latter committed and the disasters he caused during his previous term as premier. Maliki made it possible for ISIS to invade and occupy one third of Iraq and, with Iran’s precious help, persecuted all Iraqis opposed to Velayat e-faqih.


Joe has a great deal to answer for but you'll apparently never find the American media demanding answers.

We noted the United Nations report on the way protesters were treated in Iraq, noted it on Saturday.  IANS notes that the report found 123 protesters were kidnapped. Karwan Faidhi Dri (RUDAW) notes that the UN "has verified the death of 490 activists and the injury of 7,783 others since October." Hiwa Shilani (KURDISTAN 24) explains:

On Saturday, the United Nations published a report on the abduction of multiple demonstrators in Iraq since late October that detailed the experiences of some, including the circumstances in which they were taken and their subsequent interrogation and torture.
The Human Rights Office of the United Nations Assistance Mission in Iraq (UNAMI) documented 123 cases of people who disappeared between October 1, 2019, and March 21, 2020. A total of 98 individuals have been found while the other 25 are still missing.
“Absence of accountability for these acts continues to contribute to the pervasive environment of impunity in relation to demonstration-linked reports of violations and abuses,” the UN report highlighted.
Jeanine Hennis-Plasschaert, Special Representative of the United Nations Secretary-General for Iraq, stated, “The establishment of a high-level fact-finding committee by the new Government to investigate casualties and related harm is a crucial step toward justice and accountability.”

On the kidnappings,  THE NEW ARAB adds:

In every incident, those targeted for abductions had either participated in the protests or provided support to demonstrators, UNAMI said. Nearly all of the abductees were either activists prior to the protests, played significant roles in the demonstrations, or criticised authorities or armed groups on social media, it added.
Abductees were forced into vehicles by masked and armed men close to demonstration sites, according to UNAMI. Many described being blindfolded and driven to locations where they were detained.
All of them were "interrogated" by their captors, with questioning commonly focused on their role in the demonstrations, allegations of links to foreign states - particularly the United States - and their political affiliations.
All male abductees described being subjected to torture such as severe beatings, electrocution, hosing or bathing in cold water, being hung from the ceiling by their arms and legs, being urinated on, being photographed nude, death threats and threats to their families, UNAMI reported.
Female abductees said they were beaten, threatened with rape and touched in their "private areas".


The United Nations is calling for a real investigation -- not the nonsense that passed for an 'investigation' last year.  Omar Sattar (AL-MONITOR) reports:

The new Iraqi government has begun procedures to reinvestigate the violent acts during the popular protests that broke out in October and killed more than 700 people and injured over 25,000. The decision was greatly welcomed at home and in the international arena. The United Nations Security Council called for “transparency during the investigation.”


Following the first meeting of his government May 9, Prime Minister Mustafa al-Khadimi announced the formation of an investigation committee, whose members have not been disclosed so far. He said that the committee will work on uncovering the names of the parties responsible for killing hundreds of protesters who have been calling for reform and the trial of corrupt politicians.
The committee is currently being formed and its members will be announced at a later stage. This is the second committee of this kind, following the one that was formed by Adel Abdul Mahdi, former prime minister who resigned at the end of November 2019, which did not yield satisfactory results for the protesters and failed to indict any party behind the bloody events that took place in central and southern Iraq.


Isaiah's THE WORLD TODAY JUST NUTS "Rest Assured, Judge Tootie Is Here" and his "Baby Stacey Wants On The Ticket" went up yesterday.