Oh, Comey, you're so sad and pathetic

I always find something good in Zach Haller's Twitter feed.  Tonight, it is this:

Sean Davis‏Verified account @seanmdav 2h2 hours ago
Sean Davis Retweeted James Comey
Was it a crisis when you knowingly signed a false FISA warrant that has since been deemed illegal? Or when you leaked and lied? Or when you stole classified documents? Or when you violated your employment contract? Or when you were criminally referred?
Sean Davis added,
James ComeyVerified account @Comey
What really matters today is the crisis at the Justice Department. “This is not normal and it is not right, and it is dangerous territory for the rule of law.” https://www.washingtonpost.com/opinions/2020/02/12/this-is-revolting-assault-fragile-rule-law/ …
224 replies3,082 retweets6,999 likes

That is the perfect reply to the disgraced James Comey.

Where does he get off thinking he has fooled us?

He interfered in an election repeatedly and then after he basically bent the law until it broke.

He should be begging for forgiveness.

Wednesday, February 12, 2020.  Bernie won New Hampshire.  Two campaigns are over now.  No, not Michael Bennett and Andrew Yang who both announced they were suspending campaigns yesterday.  Two campaigns were killed  last night.

Starting in the United States where the New Hampshire primary took place yesterday and Bernie Sanders won it.


Bernie Sanders has won the New Hampshire primary, with Pete Buttigieg and Amy Klobuchar currently in second and third. Elizabeth Warren and Joe Biden lag those three and may not hit the vote total that would net them delegates. See the full results: wapo.st/3bvAlsS

1. Bernie Sanders is the front-runner. 2. Joe Biden is in serious trouble. Read those and more of our takeaways from the New Hampshire primary and what the result means for the rest of the 2020 race.
112 replies319 retweets1,351 likes


In fact, Joe came in fifth place in New Hampshire. 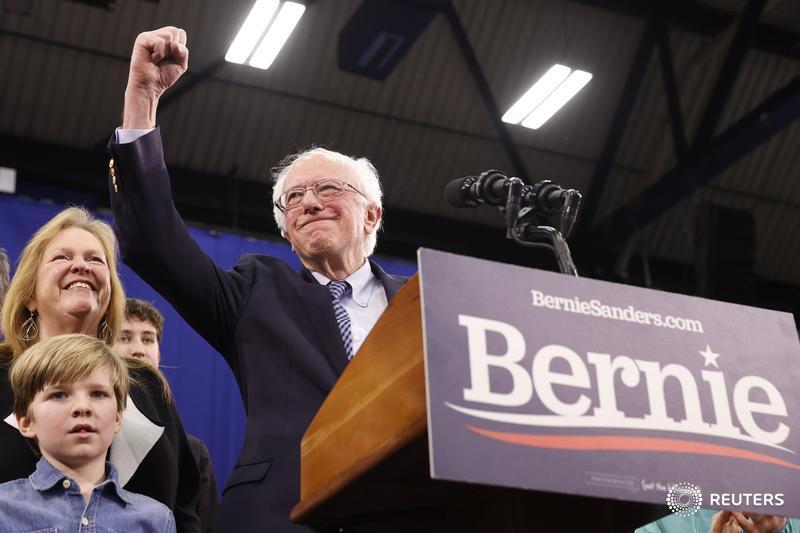 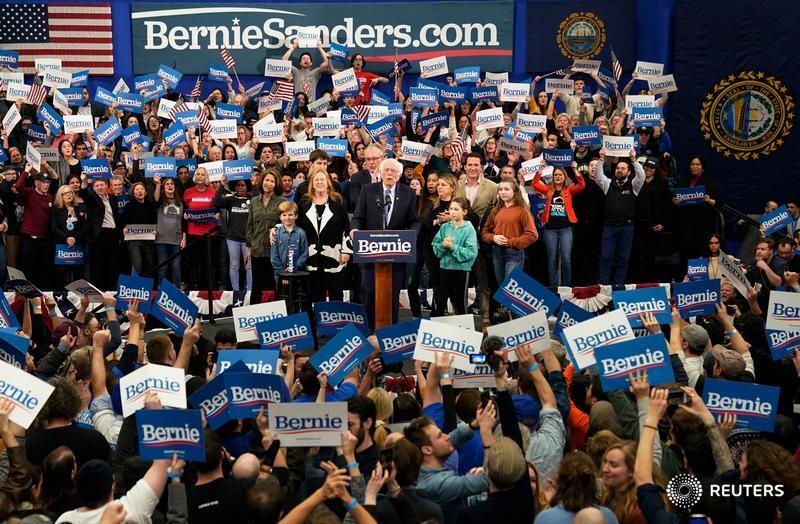 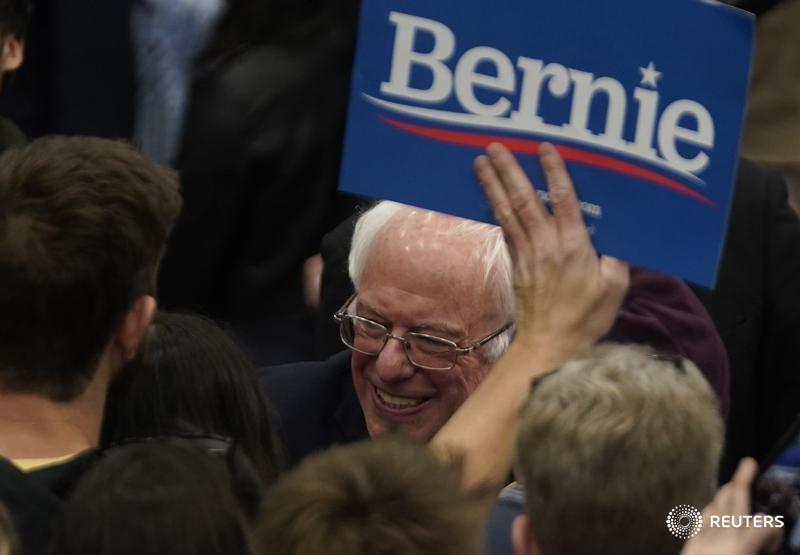 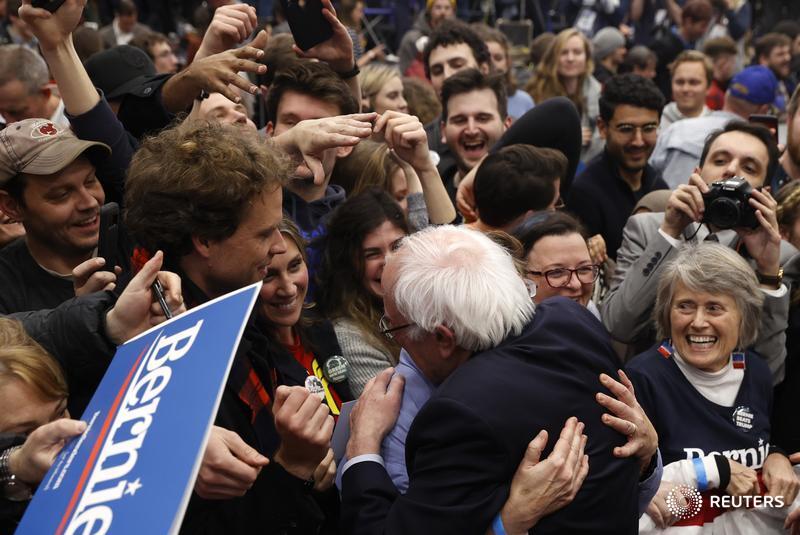 
4th in Iowa, 5th in New Hampshire -- Joe's confident he can deliver South Carolina, and maybe he can (maybe he can't -- he's slipping badly in the latest polls), but can he deliver anything beyond South Carolina.   Maybe Joe's confused?  He did this poorly in 2008 -- the second time he ran -- but he had dropped out by this point.  Maybe he doesn't realize how the process works?  Or maybe he thinks if he just keeps campaigning long enough, whoever gets the nomination will be forced to pick him as the running mate?

Joe is a full on failure and this is with the bar being lowered for him so much that a Sunday event did not become big news.  Arwa Mahdawi (GUARDIAN) reported yesterday:

Go home, Joe Biden: you may not be drunk, but you are certainly acting like it.
On Sunday, during an event in New Hampshire, the Democratic presidential candidate’s gift of the gaffe struck again. Madison Moore, a 21-year-old student, politely asked Biden to explain why he came fourth in Iowa – a fair question, given he sells himself as the most “electable” candidate. Biden responded by asking Moore if she had been to a caucus before. She said yes; he called her a “lying, dog-faced pony soldier”.

Susan Page (USA TODAY) points out, "From the start, the fundamental premise of Biden's campaign has been that he was the most electable candidate, best able to defeat Trump in November. The problem he faces now is this: The way to demonstrate electability is to win, and he hasn't, at least not yet." POLITICO's Natasha Korecki, Marc Caputo and Maya King report:

“There’s blood in the water,” said Quentin James, executive director of The Collective, a political committee that backs African-American candidates. “Black voters are starting to leave him now … A big reason lots of black voters were with Biden is they thought he was the best person to beat Trump. And they thought one reason for that is that he had the support of white voters. Now they see he has done so poorly with white voters and he no longer looks like the electability candidate.”
The size and scope of the loss — he failed to crack double digits or win any sizable city or town — challenged the wisdom of Biden’s strategy of not competing hard in New Hampshire. Biden had downplayed expectations of doing well here, claiming New Hampshire favored politicians from neighboring states, like Bernie Sanders and Elizabeth Warren. But two politicians from the Midwest, Amy Klobuchar and Pete Buttigieg, finished ahead of Biden, undercutting his talking point.
“This is horrendous. We’re all scared,” said a Biden adviser, speaking anonymously because the comments conflict with the brave public face the campaign is trying to broadcast. “I think we’re going to make it to South Carolina. I know we’re supposed to say we’re going to and we’re going to win. But I just don’t know.”

Now there’s Uncle Joe, who seemed to believe his party connections and public association with Obama would be so strong that he’d be able to coast to a primary win without having to spend significantly on ads, develop any signature proposals, or even appear that often in public. There’s still a little time left to, like, start doing that stuff: Biden’s polling leads in Nevada (Feb. 22 caucus) and South Carolina (Feb. 29 primary) are shrinking, but they still exist, and wins there could help him keep his numbers up in the southern Super Tuesday states where he’s been expected to do well with black voters. But the candidate whose sales pitch was that he came with forward momentum pre-installed is, so far, completely inert. If he still wants to win, he’ll have to earn it just like everyone else, without any help from his important friends.


Jake Novak (CNBC) predicts, "After a humiliating fifth-place finish in the New Hampshire primary and an apparent fourth-place finish in Iowa, former Vice President Joe Biden’s presidential hopes are finished. You can expect him to maybe stay in the race for another three weeks or so until the Super Tuesday primaries are over, but that’s about it."  Longtime Biden observer Timothy P. Carney (WASHINGTON EXAMINER) floats, "So when we see that Biden, in his third or fourth attempt at running for president, has yet to finish even third place in a primary, and when we see that he failed to build a network of supporters in Iowa, we need to consider that Biden doesn't win because people don't like him."  CANDID CAMERA's Peter Funt is anti-Bernie Sanders and he writes a column for USA TODAY urging Joe to drop out of the race now so that an alternate candidate to Bernie can emerge:

Still, why not let the voters decide? Because Biden is casting a shadow that extends beyond his own candidacy. Sens. Cory Booker of New Jersey and Kamala Harris of California, as well as former Housing Secretary Julian Castro, might still be in the race had Biden not been a presumptive favorite among black and brown voters. It becomes critically important to determine sooner rather than later who would get that support if Biden were not a factor.

I wish Joe would announce he was dropping out so I could go home.  Instead, we've decided we're staking out South Carolina.  We're going there today, we'll be speaking there everyday in the lead up to the primary.

Now a friend was dating John Mellencamp not long ago and I felt the need to warn her that he has many good qualities and certainly can write a song but you need to watch out.  I'm not comfortable -- maybe others are -- with someone who thinks the N-word is something to toss around.  And John does.  You can go through his SPIN magazine interviews in the 80s and 90s, for example, and come across that.

Now if I felt the need to warn a friend who the hell is vetting for Mike Bloomberg?

What presidential candidate in 2020 would use an artist in commercials if they knew the artist's history of using the N-word is right there in the open, waiting to bite the campaign in the ass.

If you've missed it, John says something at the start of the new commercial for Mike Bloomberg -- a stupid and inane ad -- and then pretends he's playing his hit "Small Town" (he's not playing it) and then it goes back to John at the end with his guitar.

Why use John Mellencamp?

The whole commercial is stupid.  Mike supposedly knows small towns, the ad insists, and he's going to invest in them and community colleges and . . .

Does Mike Bloomberg think community colleges are in small towns?

What world is that idiot living in?

How is he going to address the issues facing small towns if he doesn't even know what a small town is?  He's been out of NYC before, right?

Elizabeth Warren.  As stated her a month ago when the Michael Traceys were trying to beat up Elizabeth, there was no point, she wasn't doing to do well in Iowa or New Hampshire.  From the January 14th snapshot:

Let's set the scene.  Senator Bernie Sanders, as of weekend polling, looked to do well in Iowa and New Hampshire.  He looked to do so well that many could argue it was over for Senator Elizabeth Warren.  In politics, anything can happen, but there was a good chance that in a matter of weeks, Elizabeth would be shutting down her campaign.  If that had taken place, what would be the next step?

To ensure Bernie won the nomination by picking up her supporters.

Everyone should have taken a breath and calmed down.  But the Michael Tracey's can't calm down.

There's an effort to take offense at Elizabeth right now.  Why?  Her campaign is in tatters.  If she can't place in the top two in New Hampshire, where's she going to win?  She's not.  She needed to deliver in the first two events -- Iowa and New Hampshire.  She didn't.  That was obvious looking at the weekend polling back in January.

She needs to drop out.  She needs to make that decision herself.  Until then, the smart thing to do is to ignore her.  It's not easy for her or for her supporters to come to terms with how poorly she's performed.  I'm sorry for her.  But there is no campaign left for her.  It is over.  Most likely, the fundraising will make that point clear to her.

In the meantime, there's no reason to gloat.  Be happy Bernie won?  Absolutely.  But there's no reason to bring her loss into his win.  If he gets the nomination, he's going to need everyone's support.  And to get the nomination, he's going to need her support.  If Bernie supporters start attacking Elizabeth right now, it will be very easy for them to move not to Bernie but to Amy Klobuchar.  She's personable but she's got lousy policies.  That won't matter.  Amy knows she has to woo.  Bernie supporters need to work on wooing to.  Don't think an Elizabeth Warren supporter couldn't run over to Amy.  In 2008, you saw some Hillary supporters -- due to the constant sexism from Barack Obama's campaign -- move over to John McCain's campaign.

Baghdad sees snow for the 1st time in 12 years accuweather.com/en/weather-new… While snow inside the city limits is a rare phenomenon, northern Iraq does receive snow in the winter months, according to AccuWeather Senior Meteorologist Jason Nicholls.

While snow is slightly less rare in northern Iraq, for a severe winter system to descend this far south, so as to engulf central and southern regions of the Western Asian nation, really is quite incredible.electroverse.net/incredibly-rar… 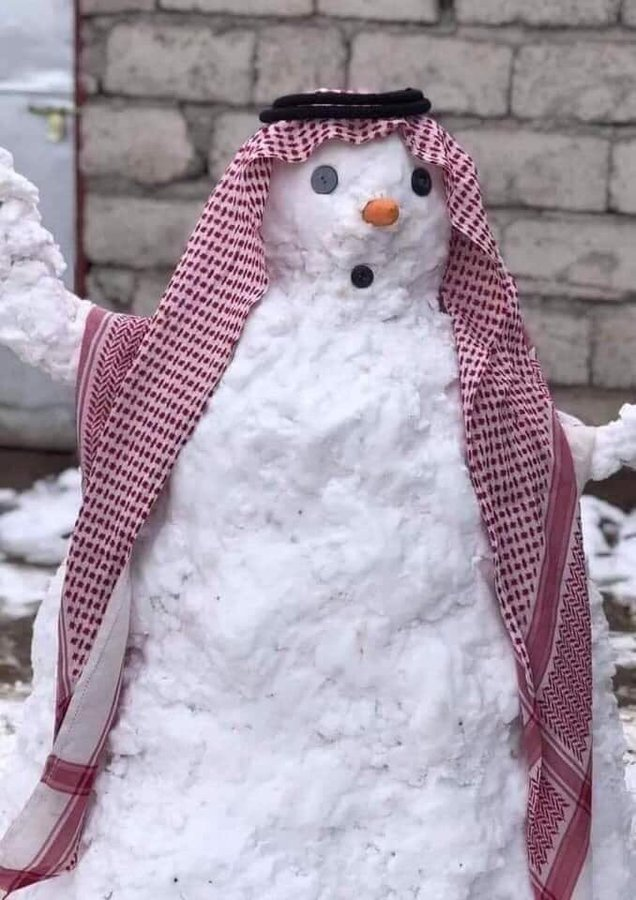 Iraq's capital of Baghdad awoke to a sight not seen in over a decade — their city covered in snow.
0 replies0 retweets0 likes