Tell Congress to get back to work

I loved Trina's "Impeachment, farce, the CIA, Jimmy and Rosalynn Carter" so please make a point to check that out.

Over at THE HILL, I enjoyed Jenna Ellis Rives' column:


The impeachment narrative pushed by House Democrats needs to be called exactly what it is, which is a political coup. Contrary to what Speaker Nancy Pelosi, Chairman Adam Schiff, and progressive left wingers would have you believe, the United States still does have an objective rule of law, and the Constitution is not merely a guideline subject to interpretation and application at the whim of a power grab.
Regardless of whether you are a Republican, a Democrat, an independent, or anything else, it should concern all of us that the rule of law is being tossed out in favor of an open coup designed to undermine a free and fair election in the United States. Sheer partisan hatred of an American president by the opposition party is not and has never been a sufficient legal or constitutional basis for impeachment. The Constitution lays out the scope of treason, bribery, or other high crimes and misdemeanors.”
Political leverage or the inability to win elections are not listed. Over the past few weeks, some commentators have suggested that the phrasing “high crimes and misdemeanors” is an intentionally vague term that has no specific articulable definition. Not only is that false, but a lack of brightline jurisprudence does not render a term in the Constitution so malleable that the Democrats can fashion a political weapon of it.

The move for impeachment is a farce and Democrats in Congress supporting it should be ashamed of themselves.

It is time for them to drop this nonsense and get to work addressing the real issues Americans face.

Thursday, October 3, 2019.  Even Joe Biden's friends in the press denying anything wrong took place demonstrates that Joe did something wrong and meanwhile the protests continue in Iraq.


In the United States, the race for the Democratic Party's presidential nomination continues.  While Senator Bernie Sanders has been temporarily sidelined due to surgery, War Hawk Joe Biden continues to flounder as desperation hits in.

I will put the integrity of my whole career in public service to this nation up against President Trump's long record of lying, cheating, and stealing any day of the week.
/>

Will you put that record up?

Is it the record where you pushed through the 'crime' bill that targeted African-Americans?  This as your little blond princess niece assaults a police officer and does no time and then, a few years later, is caught stealing over $100,000 and does no time.

Caroline Biden.  Apparently she has a major vag problem.  Apparently she's crusty lips down there.  Apparently she had to steal a credit card and charge over $100,000 worth of Vagisil at a drug store to deal with her crust lips and to stop popping out loafs of sourdough bread from her personal oven.  Apparently, one of her boyfriends asked her why she was chewing bubble gum with her vagina and she replied that wasn't bubble gum, those were yeast bubbles.

That's got to be it, right?  The press doesn't want to talk about a thirty-something woman who's Joe Biden's niece and stole over $100,000 so it's got be vag related, right?  That's the only reason they're so mum on the topic.  (See Nora Ephron's essay "Dealing With The, Uh, Problem.")

When is Joe going to be asked why his niece was shown favoritism?

Now Iowa, please remember, knocked him out of the race in 2008.  He bowed out immediately after.

But he thinks the myth of Joe Biden support among African-Americans will save him this go round.

Joe's desperate and it's really starting to show.

‘You’re Not Going To Destroy Me,’ Biden Warns TrumpJoe Biden is giving a preview of a potential general election face-off with Donald Trump by taking a more aggressive tone and assailing the president for his “abuse of power”…

And he's right, Donald Trump is not going to destroy Joe Biden -- mainly because Joe's doing such a good job of that all by himself.


Whenever he's lying, Joe likes to claim that he's the voice of truth.  That's his tell.

Or have we all forgotten this: "This is the God's truth.  My word as a Biden."


So many whores rush to prop Joe up.  Like here.

Twitter has since removed the video featuring Nickelback’s song “Photograph” for copyright reasons that President Trump tweeted on Wednesday. This, as the president accused Joe Biden of abusing his power to help his son. There’s no evidence of wrongdoing, @kwelkernbc reports.
/>

There is ample evidence Joe abused his power.  That's why we have ethical guidelines.  Is everyone forgetting that Hillary Clinton, becoming Secretary of State, had to draw a wall between herself and the Clinton Foundation?  That she couldn't be seen as helping Bill?

That's what ethics are about.

Now first off, the fact that THE TODAY SHOW has to insist (lie) that Joe has done nothing wrong is proof that he's done something wrong.

That's the standard.  If that's hard for whores who pass themselves off as journalists to understand, they might want to check with their own HR departments because that's similar to the ethical standard that they are supposed to operate by.

TODAY airing a segment goes to the reality that Joe did not avoid the appearance of a conflict of interest.  Did he do worse than that?  I have no idea.  It appears he did but that's why you have investigations.  But what is known -- what is demonstrated just by the continued conversation around this -- is that Joe did something wrong.

And let's remember whose administration he served in: Barack Obama's -- Barack who came into the White House promising greater openess, more transparency.  How does that reconcile with the profiting Hunter Biden and James Biden did while Joe was vice president?

NBC reporting on the 2013 Official Visit to China where Joe Biden brought his son, Hunter. "Unknown to the press back then Hunter Biden was forming a Chinese private equity fund...10 days after the Biden's trip Shanghai authorities issued the funds business license."
/>

At the same time, MSNBC, Adam Schiff, chairman of the House Permanent Select Committee on Intelligence, and the usual #Resistance figures are also hard to take seriously. Just as Trump’s defenders have immediately and reflexively dismissed any impropriety on the president’s side, the Democrats — and much of the media — have rushed to defend the Biden family from allegations of political profiteering.
Yet there’s plenty of evidence to back that up, even if Trump has exaggerated many of the charges. Much of it has already emerged and plenty more will during the Democratic primaries, because it’s low hanging fruit for his rivals for the nomination. “Interviews, court records, government filings and news reports, however, reveal that some members of the Biden family have consistently mixed business and politics over nearly half a century, moving from one business to the next as Joe’s stature in Washington grew,” Politico reported in early August, in a story headlined “Biden Inc.”
Today NBC had a story about a 2013 trip to China by Joe, then Veep, and son Hunter Biden, then looking for business opportunities, that looks shady as shit. Here’s an excerpt:
As he accompanied his father to China, Hunter Biden was forming a Chinese private equity fund that associates said at the time was planning to raise big money, including from China. Hunter Biden has acknowledged meeting with Jonathan Li, a Chinese banker and his partner in the fund during the trip, although his spokesman says it was a social visit.
The Chinese business license that brought the new fund into existence was issued by Shanghai authorities 10 days after the trip, with Hunter Biden a member of the board...
Hunter Biden’s spokesman, George Mesires, told NBC News that Hunter Biden wasn’t initially an “owner” of the company and has never gotten paid for serving on the board. He said Hunter Biden didn’t acquire an equity interest in the fund until 2017, after his father had left office.
And when he did, he only put in about $420,000 — a 10 percent interest. That puts the total capitalization of the fund at the time at about $4.2 million.

Joe Biden has said he has “never spoken to my son about his overseas business dealings. Hunter Biden has said he didn’t meet with Chinese government officials during the trip and did no business on it, even though he met with Li, the Chinese banker and soon-to-be business partner. And oh yeah, the investment fund’s formation documents were filed in November 2013, just a month before the the China trip.

Baghdad has imposed an indefinite curfew after two days of chaotic protests across Iraq that left nine dead u.afp.com/Ja2E 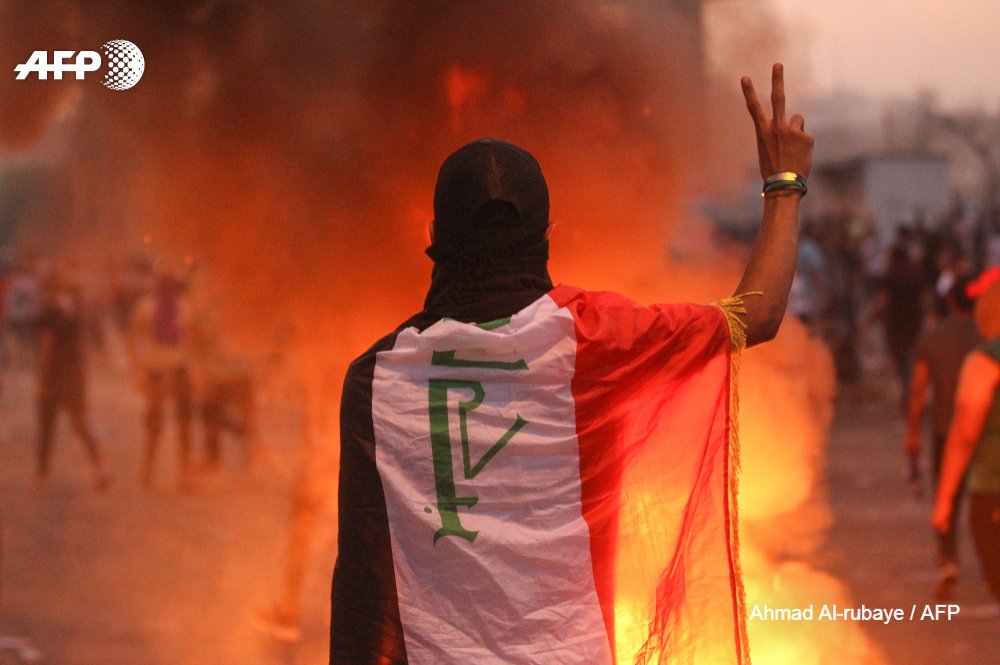 
It turned deadly, did it?

Well when security forces start using bullets on protesters, deaths tend to happen.  I'm surprised that the press wants to act surprised by this.  CNN says 14 of the 15 dead are protesters.

That’s why the government blocked the internet so they can do whatever they want to those peaceful protesters and nobody knows what the hell is going on out there! #save_the_iraqi_people #Iraq_protest #العراق #العراق_ينتفض #بغداد #ساحة_التحرير
/>

The Iraqi government has a long, long history of turning off the internet when they want to shut down conversations and to tamp down on the truth.  ALJAZEERA notes:


"All through the evening, we've been hearing the sound of gun fire and sirens," said Al Jazeera's Imran Khan, reporting from Baghdad. The demonstrations have spread to several cities across the country, with demonstrators in Najaf reportedly setting fire to government buildings, he said.
The Iraqi government has been taken by surprise over the size of the rallies, which were mostly organised on social media, he said, adding: "The government appears to be very concerned about these protests spreading. They are restricting live broadcasts from the protest scene, as well as social media platforms, like Facebook and Twitter."

The Iraqis are never resting, the strongest people who have no cover, all this is nonsense and they are still standing there to protest their rights. You will see better days, God willing #Save_the_Iraqi_people #Iraq
/>

This is a major issue and a major story.  Why is the press not demanding some sort of response from Joe I-was-in-charge-of-Iraq from 2009 through 2016?

At least 16 people were killed from clashes between security forces and protesters over the past few days, Iraq's Human Rights Commission says. People are taking to the streets to protest unemployment, corruption and a lack of basic services
/>

Protesters in Iraq defy curfew as widespread anti-government protests enter the third day. Police have opened fire to disperse protesters in Baghdad. The death toll has risen to at least 20 aje.io/rlsdb 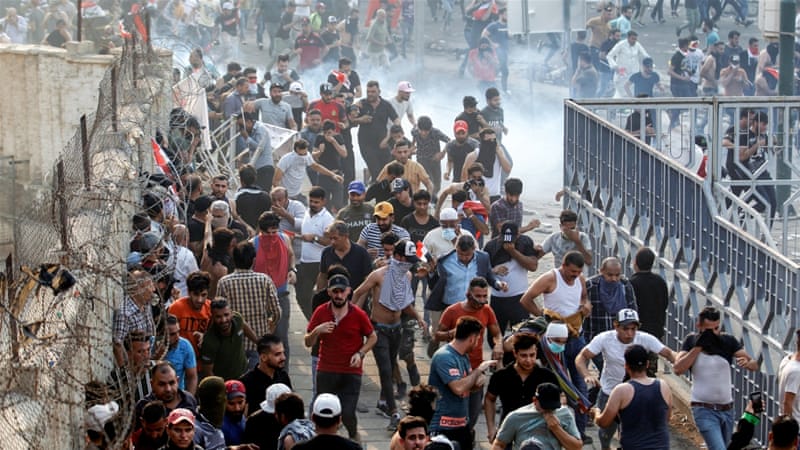 
Meanwhile, the US military brass offers the usual 'all sides' b.s.

US military in Baghdad issues unusually blunt warning amid sustained protests in Iraq. "Coalition troops always reserve the right to defend ourselves." 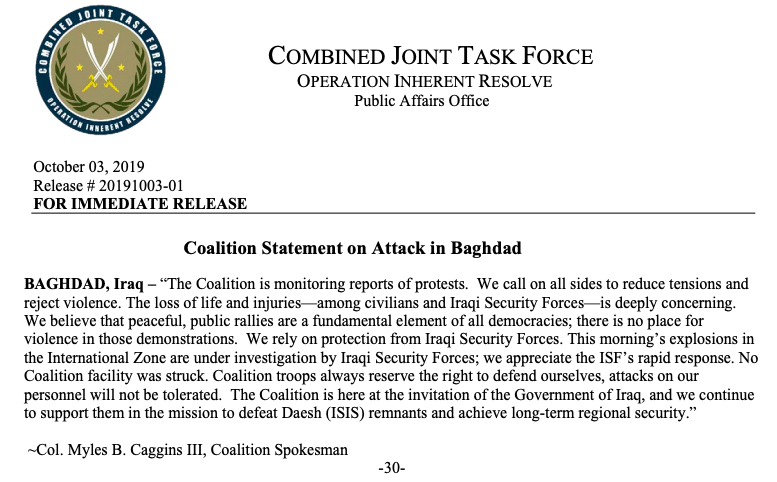 Who started the violence?

Rt.@thestevennabil-#Iraq #Iran This is significant, #Karbala Iraqi protesters chanting “Labayak ya Hussien” while gov't forces show a violent response, mismanagement at its best and this will lead to more people coming out to protest by nightfall
/>