This is very disturbing


Repeating, that is outrageous.


CrowdStrike, the controversial cybersecurity firm that the Democratic National Committee chose over the FBI in 2016 to examine its compromised computer servers, never produced an un-redacted or final forensic report for the government because the FBI never required it to, the Justice Department has admitted.
The revelation came in a court filing by the government in the pre-trial phase of Roger Stone, a long-time Republican operative who had an unofficial role in the campaign of candidate Donald Trump. Stone has been charged with misleading Congress, obstructing justice and intimidating a witness.
The filing was in response to a motion by Stone’s lawyers asking for “unredacted reports” from CrowdStrike in an effort to get the government to prove that Russia hacked the DNC server. “The government … does not possess the information the defandant seeks,” the filing says.
In his motion, Stone’s lawyers said he had only been given three redacted drafts. In a startling footnote in the government’s response, the DOJ admits the drafts are all that exist. “Although the reports produced to the defendant are marked ‘draft,’ counsel for the DNC and DCCC informed the government that they are the last version of the report produced,” the footnote says.
In other words CrowdStrike, upon which the FBI relied to conclude that Russia hacked the DNC, never completed a final report and only turned over three redacted drafts to the government.

24 candidates are seeking the Democratic Party's presidential nomination -- six are women.  20 have qualified for the first debates (all six women qualified).  Marianne Williamson spoke with Major Garrett this week on CBS' THE TAKEOUT.


Marianne also sat down with TO THE CONTRARY WITH BONNIE ERBE (PBS).

The principles in the Declaration of Independence are America’s mission statement, and our biggest problem is that we’ve lost our psychological & emotional connection to them. That makes us easy to distract, easy to play, easy to fool. ushistory.org/declaration/do…
14 replies41 retweets144 likes

Another candidate for the presidential nomination is Pete Buttigieg.   Devan Cole (CNN) reports:


Democratic presidential candidate Pete Buttigieg on Sunday expressed concern about the Trump administration's Iran saber-rattling, drawing a comparison to the rising tensions during the Bush administration that led to the Iraq War.
"Well, I think we need a measured assessment of information as it continues to come in. There's no question that Iran has a pattern of malign activities. There's also no question that there is a pattern that is disturbingly reminiscent of the run up to the war in Iraq, in some cases being driven by the same people," Buttigieg, who served in Afghanistan as an intelligence officer, told CNN's Jake Tapper on "State of the Union."
"I mean, the fact that one of the architects of the Iraq war is the President's national security adviser right now, when the President himself has pretended that he was against the Iraq War all along. This is shocking," he said, referring to John Bolton, the White House's national security adviser who also served in security and diplomatic positions under President George W. Bush.

Staying on Pete and Iraq, Rachel Frazin (THE HILL) notes:

Buttigieg discussed fellow candidates Sen. Bernie Sanders (I-Vt.) and former Vice President Joe Biden in an interview with CBS' "Face the Nation". He particularly knocked Biden's vote for the Iraq War.
"I certainly think that vote was a mistake and I have a different view on that conflict," Buttigieg said, according to a transcript of his remarks.
Buttigieg, who served as a Naval intelligence offer, also noted that the war was something he "opposed as a student and continue[s] to think was a terrible idea."


Of the 24 candidates for the Democratic Party's presidential nomination, only one voted for the Iraq War: Joe Biden.  Akbar Shahid Ahmed (HUFFINGTON POST) notes:

The war in Iraq has roiled presidential politics in each election since President George W. Bush launched the invasion of the country in 2003. It was central to the 2004 election, arguably the reason that Barack Obama defeated Hillary Clinton for the 2008 Democratic nomination, and no small factor in Donald Trump’s victory in 2016, when he pitched himself as an alternative to elites in both parties ― particularly his rivals in the GOP ― who had backed the invasion.


As Joe Biden leads the Democratic field for 2020, the U.S.’s bloody history with Iraq is set to again become a defining issue in the race, and not simply because Trump has talked about an indefinite U.S. military presence there.

Biden wants to convince voters his resume on foreign policy is an asset. But they’ve got ground to think otherwise.
“He’s been wrong on nearly every major foreign policy and national security issue over the past four decades,” former Defense Secretary Robert Gates, who served with Biden in the Obama administration, wrote in his 2014 book.
Just this month, Biden’s primary opponents have zeroed in on his support for Bush’s invasion.


“You’ve got to ask yourself where Joe Biden is on the issues that are most important to you. Did he support the war in Iraq that forever destabilized the Middle East?” former Rep. Beto O’Rourke asked on MSNBC this week. Days earlier, Rep. Seth Moulton (D-Mass.) had called for Biden to apologize. Almost 30 percent of Democrats are unhappy about Biden’s vote and more than 40 percent of party supporters younger than 30 say it makes them less likely to back him, a Politico/Morning Consult poll recently found.


While Pete rightly calls out Joe, don't mistake Pete for anti-war.  He's pro-war and repeats every pro-war lie as fact.

Mayor Pete today lamented that the Iraq War "very nearly made our party into isolationists." Hmm, really? When did "isolationism" ever become a dominant tendency in the Dem Party? Previous Dem administration was involved in military conflict all over the world. Bizarre strawman
44 replies103 retweets461 likes


Pete is a War Hawk.  He tries to pretend otherwise but that's all he is and, apparently, all he will ever be.

A lot is being made of national polls.  First, it really is too far out from the election to put so much faith in polling.  Second, national polls mean nothing in the presidential election.  If you're trying to predict the election, you go to state polls because the popular vote -- as we saw yet again in 2016 -- is not how a US president is elected.  You go state by state to see who's winning what.

Only four have double-digit support among Democratic voters with almost nine months to go before the Texas primaries: former Vice President Joe Biden (23%), former U.S. Rep. Beto O’Rourke of Texas (15%), and U.S. Sens. Elizabeth Warren of Massachusetts (14%) and Bernie Sanders of Vermont (12%). And only four others have the support of more than 1% of the Democratic voters: South Bend, Indiana, Mayor Pete Buttigieg (8%); U.S. Sen. Kamala Harris of California (5%); former Housing and Urban Development Secretary Julián Castro of Texas (3%); and U.S. Rep. Tulsi Gabbard of Hawaii (3%).


Texas has 38 of the 538 votes in the electoral college.  Texas is a winner takes all state (all votes go to one candidate) and the last time a Democrat won Texas in a presidential campaign was Jimmy Carter in 1976.

Amb Tueller joined Minister of Water Resources Jamal al-Adili and Italian Amb Pasquino supporting the US Army Corp of Engineers @USACEHQ and Italian company Trevi as they celebrated the successful completion of emergency efforts to stabilize Mosul Dam in partnership with #Iraq. 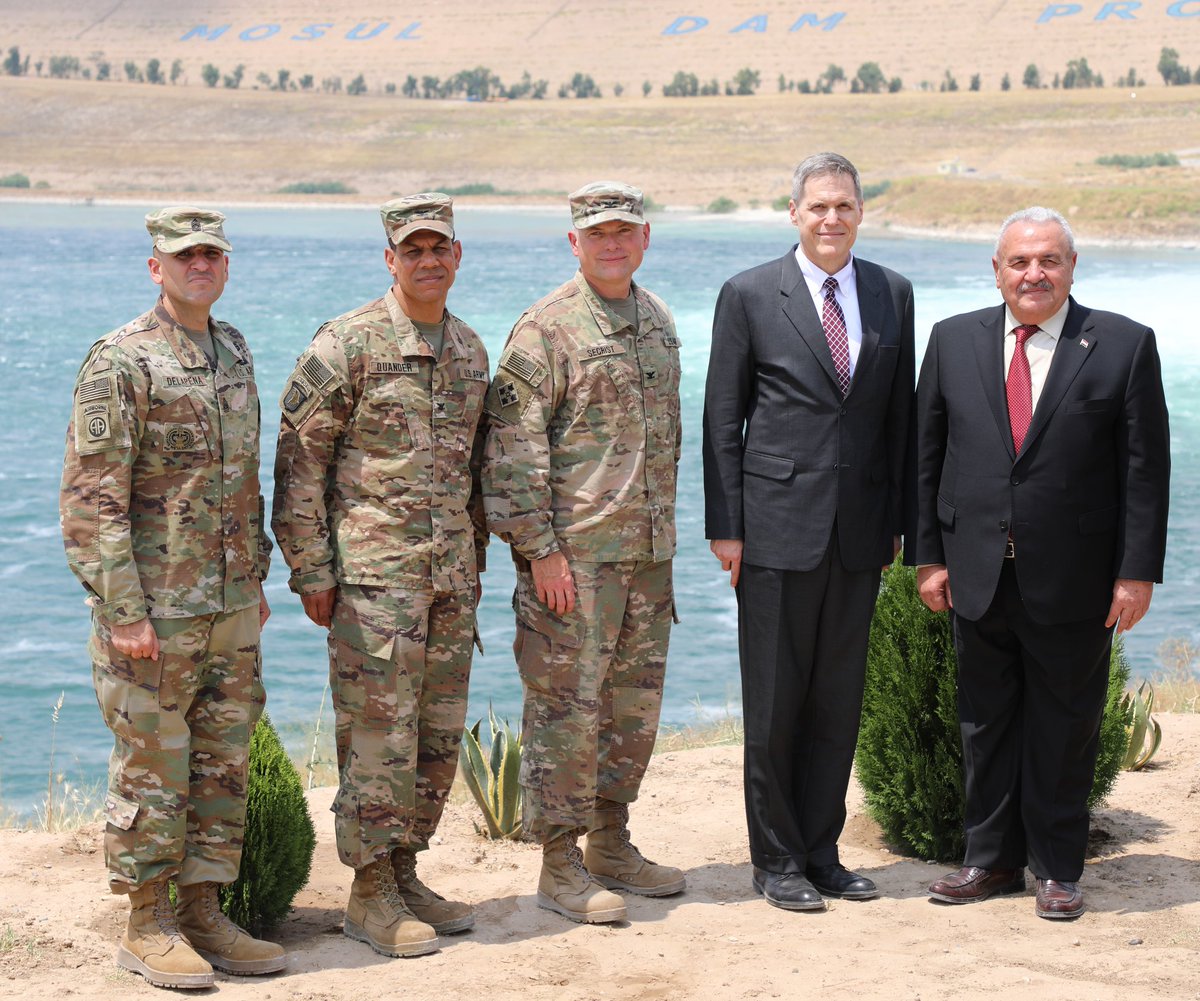 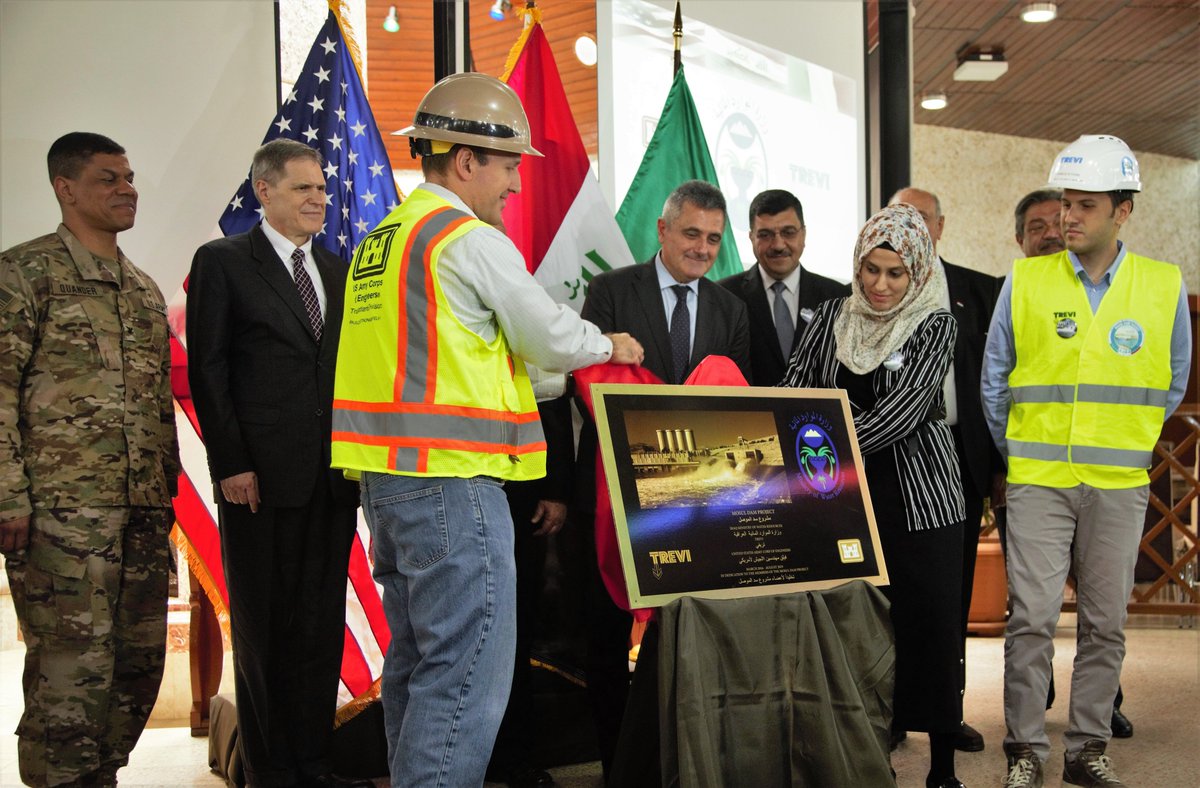 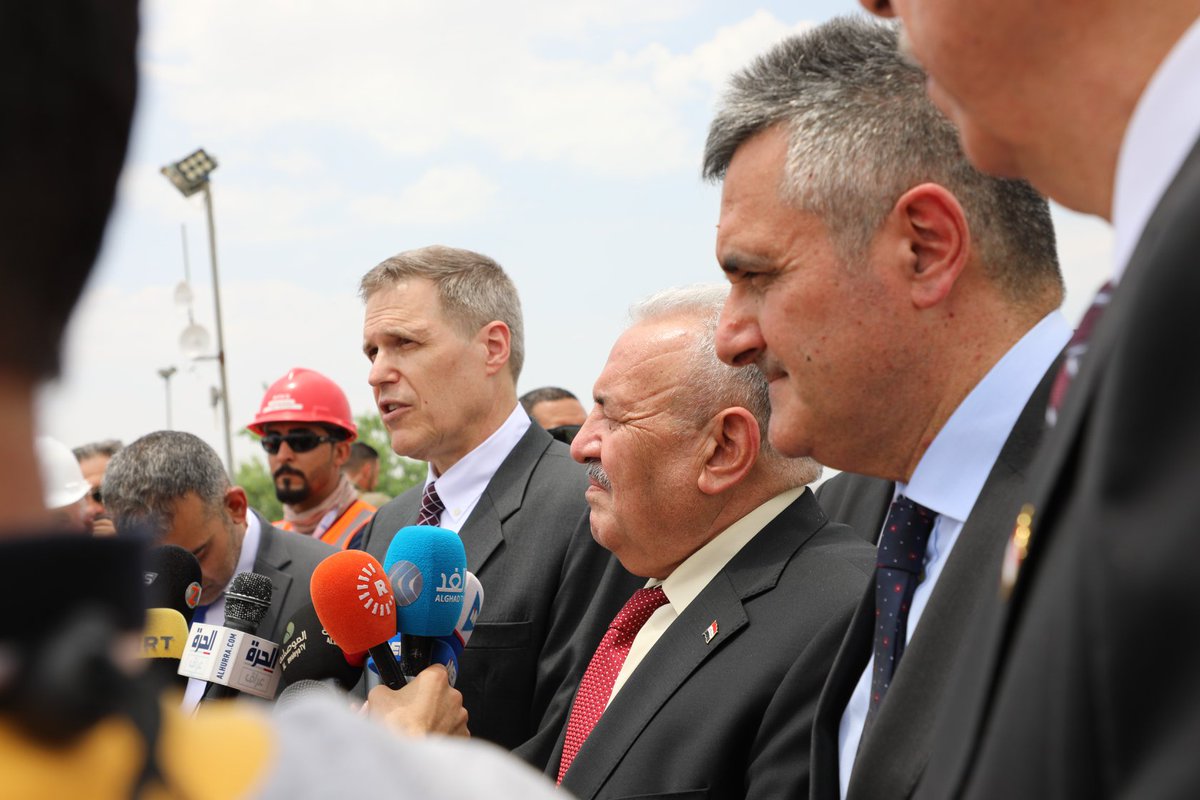 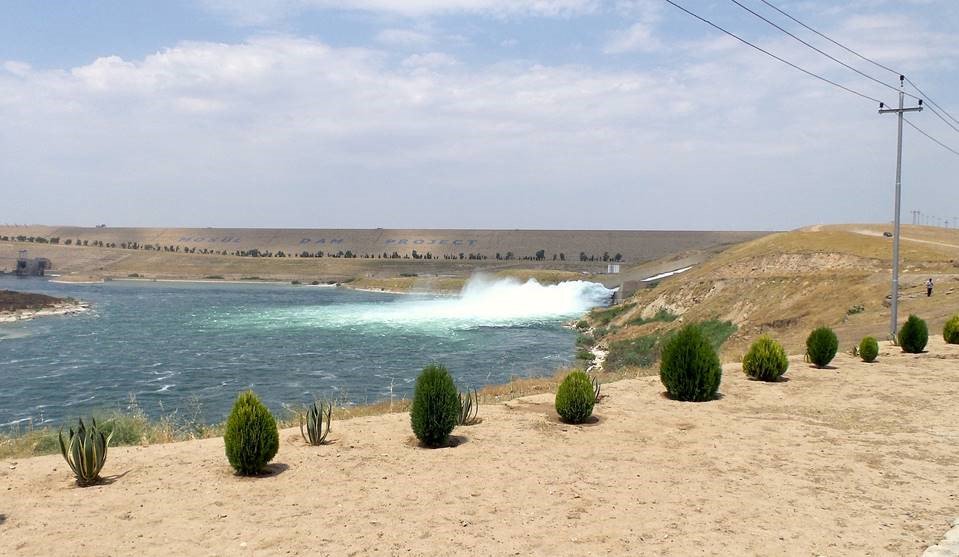 
Matthew Tueller is the US Ambassador to Iraq.  He was nominated in November of last year by US President Donald Trump but the Senate dragged its feet allowing Iraq to be without a US Ambassador after Douglas Silliman left at the end of January.  Tueller was finally confirmed on May 16th.  June 9th, he arrived in Baghdad.   NRT reports:

Recently-arrived US Ambassador to Iraq Matthew Tueller said on Sunday (June 16) that Mosul Dam poses no danger to people and that they will benefit from the water of its reservoir.

Tueller said in a statement that the dam had been repaired by US Army Corps of Engineers and Italian company Trevi to shore up its foundation.
"In this summer, a team from the Iraqi ministry of water resources will be trained on the high-tech equipment at the dam, so as to continue to reconstruct the dam for coming years,” Tueller said during a visit to the dam.

Once the dam’s reservoir reaches sufficient capacity, it will be a resource for drinking water, agriculture and generating electricity, Matthew added.


So file that away for when the largest dam in Iraq is again an issue.
As we wind down, let's note this from SWAN:


FOR IMMEDIATE RELEASE
June 13, 2019
SWAN Supports Removing Commanders from Making Decisions in Felony Cases
Washington, DC –The Service Women’s Action Network strongly supports the reintroduction of the Military Justice Improvement Act by Sen. Kirsten Gillibrand (D-N.Y.) today. The MJIA would remove commanders from the decision-making process in sexual assault cases.
“Removing Commander’s from the decision-making process sends a clear signal that there are some crimes that are so severe that Commanders have no place in deciding if, when or how they are prosecuted,” said retired Army Col. Ellen Haring, SWAN CEO. “Too many commanders have failed to properly investigate or prosecute subordinates charged with sexual misconduct and this failure has led service members to refuse to report sexual assaults because they do not trust their commanders to make proper disposition of such charges or to protect them from retaliation from superiors or peers,” Haring said. “This change protects both the victim and the accused by putting investigations and prosecutions in the hands of independent, trained experts.”
The Military Justice Improvement Act makes a revolutionary change to the Uniform Code of Military Justice by removing from the accused’s commander the authority to dispose of felony-level charges for non-military-specific crimes. Commanders would retain the authority to dispose of 67 military-specific crimes, such as desertion and AWOL and they also retain the authority to dispose of misdemeanors (for which the maximum penalty is less than a year in prison) using Non-Judicial Punishment. The disposition of felony-level crimes would become the providence of military JAG officers with substantial prosecutorial training and experience—training and experience which few military commanders have.
According to Defense Department officials reports of sexual assaults have steadily increased since 2012 and two thirds of sexual assault victims do not report their assault while 43% of individuals who reported experienced retaliation. “When it came time to make the decision to report my sexual assault my trust in my command was a determining factor. The response that I received when I attempted to initially report was, ‘He’s a good sailor. Do you want to ruin his career?’ Knowing that my command did not care about my safety or health deterred me from reporting and led to future assaults that also went unreported,” said Sasha Georgiades, SWAN case manager and Navy veteran.
About the Service Women’s Action NetworkSWAN is a national, nonpartisan organization and member-driven community network advocating for the individual and collective needs of service women and women veterans. To date, SWAN has played a major role in opening all military jobs to service women, holding sex offenders accountable in the military justice system, eliminating barriers to disability claims for those who have experienced military sexual trauma, and expanding access to a broad range of reproductive healthcare services for military women.