No, Joe Biden, just not

Ryan Saavedra‏Verified account @RealSaavedra 24h24 hours ago
New York Times reports Joe Biden is entangled in a Ukrainian corruption scandal: As Vice President, Biden pushed Ukraine to fire a prosecutor that had opened a case into a company that was paying his son, Hunter.
151 replies1,412 retweets2,470 likes


Considering that the incidents in question took place while Mr. Biden was the Vice President of the United States, we really should be wondering why the press has still not seriously examined this.

Mr. Biden is not the candidate America needs.

Kenneth P. Vogel‏Verified account @kenvogel May 1
NEW: The BIDENS are entangled in a Ukrainian corruption scandal: @JoeBiden pushed Ukraine to fire a prosecutor seen as corrupt. BUT the prosecutor had opened a case into a company that was paying HUNTER BIDEN. The Bidens say they never discussed it.
4,546 replies16,112 retweets33,838 likes
Show this thread

John Cardillo‏Verified account @johncardillo Apr 30
Joe Biden's son Hunter, the guy with BIG Ukraine problems courtesy of his dad, was discharged from the Navy in 2014 after testing positive for cocaine use. But you wouldn’t know this because the MSM is fixated on Don and Eric Trump.
820 replies11,638 retweets18,174 likes

Thursday, May 2, 2019.  A Kurdish judge takes his own life, a member of the US Congress insists the answer in Iraq is for religions to have their own militias and more absurdity.

An Kurdish Iraqi judge from the province of Dohuk in on Tuesday took his own life live on Facebook.
Dohuk provincial police issued a brief statement yesterday morning explaining that Judge Subhi Abdullah from the Akre region died of his wounds in a hospital.
Kurdish media sites reported that the judge has been living alone in the mountains in Dohuk to protest Kurdistan’s referendum held in 2017. He used a gun to shoot himself in  the chest.


Staying with the topic of FACEBOOK for another issue, this remains posted at the US Embassy in Baghdad's FACEBOOK page:

As we covered in last Saturday's "Moqtada floats closing the US Embassy, the Iraqi government demands the US delete a FACEBOOK post," Sunday's "US embassy calls Iran corrupt, Iraq responds with a call for censorship, where's the US media?" and Monday's "Iraq snapshot," that post has enraged the Iraqi government which has asked the US Embassy to delete it.  Thus far, it hasn't been deleted.  Also thus far, American news outlets have avoided the story.


Last month, the US Embassy in Baghdad -- which still has no ambassador -- announced:

Today in Fallujah, Chargé d’Affaires Joey Hood announced that the United States Government intends to provide an additional $100 million to help stabilize liberated areas once held by the Islamic State.  The United States Agency for International Development will provide the funds to the United Nations Development Program (UNDP).  With this $100 million contribution, the U.S. Government will have provided $358 million to stabilization efforts in Iraq since 2015.
The Funding Facility for Stabilization is supported by the Global Coalition to Defeat ISIS and managed in cooperation with the Government of Iraq.  The United States and the GOI are committed to creating the conditions to allow displaced Iraqis to return to their homes and start to rebuild their lives.  Strengthened with new funding, this stabilization program will restore essential services, such as water, electricity, sewage, health, housing, and education.

In his announcement, the Chargé called on Anbar’s elected officials, tribal sheikhs, and residents to protect the project work sites and ‎do their part to re-integrate back into their communities all displaced Iraqis who wished to return home.


Another 100 million.  The price tag on the never ending war just keeps increasing, doesn't it?  The trillion dollar mark for the costs of these forever wars was passed long ago.


Homelessness impacts rural areas & urban centers, stemming from medical debt, job insecurity, & lack of affordable housing. Instead of wasting trillions on regime change wars, the new cold war and arms race we must use our precious resources for the needs of the American people.

Basic needs cannot be met while maintaining these wars.  That's a reality.

I got a list of demands
Written on the palm of my hands
I ball my fist, you're gonna
Know where I stand
I'm living hand to mouth
You wanna be somebody? See somebody?
Try and free somebody?
"List of Demands (Reparations)" --  The Kills


ONE AMERICA NEWS NETWORK spoke with US House Rep Jeff Fortenberry yesterday and the Congress member was stressing how the US needed to provide more aid to the Christian and Yazidi communities in Iraq.  The Yazidis?  Any Yazidis who are in displacement camps, sure.  But those who are back home?  No.  The US government should not provide a dime to those people currently.  Many of us are rightly appalled by the separation of parents and children in the current deportations here in the US.  There is no reason in the world for our tax dollars to go to a group whose leadership has announced that they will 'welcome' back Yazidi women who were kidnapped and forced into marriage with members of ISIS but they will not allow the children of those forced marriages to be part of the community.  They are telling women who were kidnapped, most likely raped, that they can choose their community or they can choose their young child but they can't have both.  To return to the Yazidi community, the Yazidi leadership is saying that the women must abandon their children.  (See yesterday's snapshot for more on this topic.)  No.  That is a group of people that should not be receiving US aid.  Those are not democratic principles, those are not actions that foster unity and reconciliation.  There should be no US aid flowing to that group unless/until the leadership changes that policy.

Fortenberry made many comments but did not address this issue (nor was he asked about it).  For some strange reason, he believes that the Yazidis and other groups should have their own armies and then, even stranger, he says this would be "healthy pluralism."

How do more militias in Iraq spell healthy pluralism?  They don't.  The US government has already spent 16 years training and re-training and training again and training one more time and bear with us for another training of the Iraqi military so maybe Fortenberry thinks militias would be more effective -- or at least learn more quickly?  Regardless, creating all these militias is not helping anyone and only setting the stage for clashes between them and other existing militias or them and the standing Iraqi military.

If Fortenberry doesn't feel the Iraqi military is defending the Iraqi people, he needs to make that case.  As it stands, his proposal of arming Yazidi and Christian militias is not one that will foster "healthy pluralism" in Iraq.  It will further divide the country.

In other news, RUDAW reports:


Iraq made more than $7.11 billion trough oil exports in April, the most this year, according to the Ministry of Oil — primarily due to higher international oil prices.


Iraq is not Ethopia.  It brings in billions each years.  Where does the money go?  Oh, that's right, Iraq has one of the most corrupt governments in the world.  Nouri al-Maliki's son couldn't get a real job until his father was prime minister and then his daddy gave him jobs.  Corruption jobs like the deal with Russia.  The Iraqi people struggle to survive but Nouri's son has homes all over Europe and sports cars and huge wealth.  He didn't earn it.  His daddy stole it.

A drive through #Anbar province is a snapshot of #Iraq today

So much destruction dotting the landscape. Yet also, much rebuilding underway. 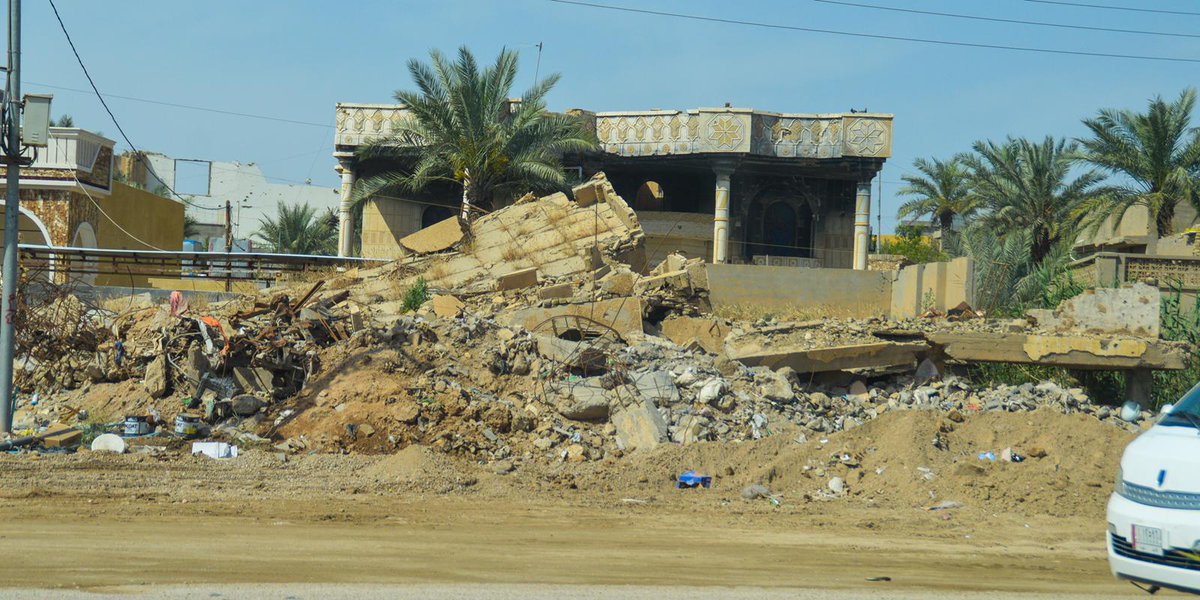 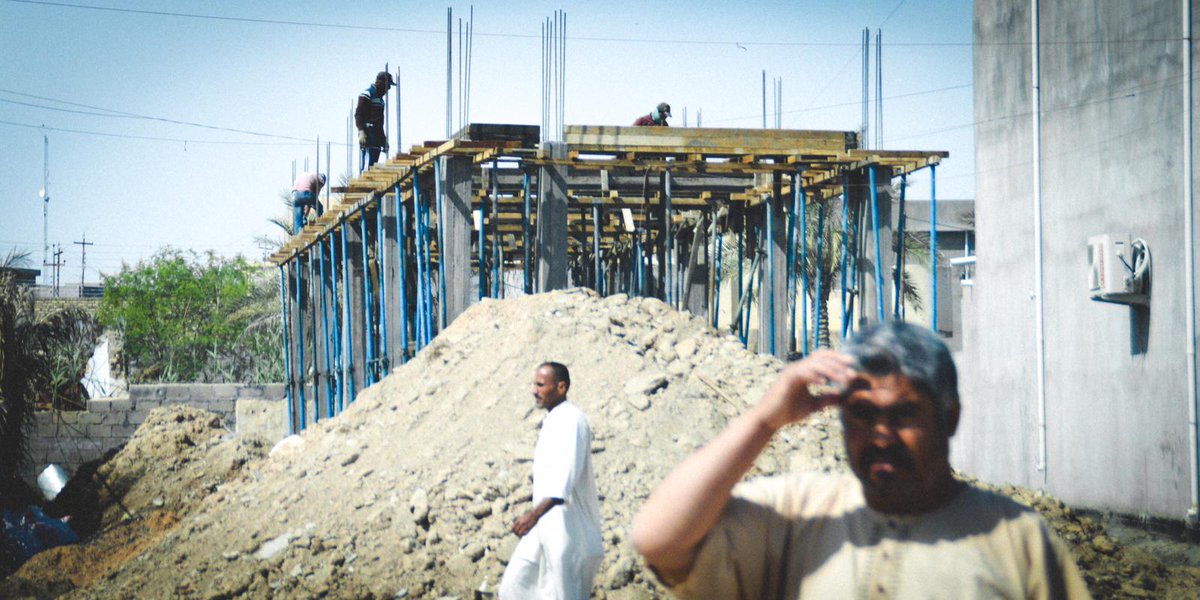 And if a corrupt government didn't siphon off millions yearly, imagine what a rebuilt Iraq could actually look like.

Margaret Griffis (ANTIWAR.COM) reports, "During April, at least 211 people were killed, and 105 others were wounded. Also, 34 bodies were recovered from a mass grave.  Last month, 134 people were killed in Iraq, and 45 bodies were recovered; 96 people were wounded. This month’s figures are roughly in line with March’s, with two notable exceptions: Two U.S. servicemembers died, and the number of militants killed more than doubled."

Watch and share the story of Manar, one of the many #IraqiWomen who is working hard every day to make our country a better place for all of us. #ForANewIraq