General Mike Flynn's life has been destroyed -- as has his family's lives -- and there is no cause to even jail him?  Yes, Robert Mueller is on a witch hunt and, yes, there is nothing to the hysteria but crazy and jealousy.

Tuesday, December 4, 2018.  "All that I have is that I saw.  I saw without being afraid and without turning away.  And that I didn't forgive the unforgivable."

Replying to @TIME
Invaded Panama. Invaded Iraq (the first time) on a lie. Withheld evidence from Iran/Contra hearings. Highway of Death. We ignore the horrible things former politicians did, "honor them for their service" when they die, then wonder why the next ones are worse.
0 replies0 retweets0 likes

That's the man some are mourning, a true War Criminal.

And you can't mourn a War Criminal without a lot of lies.  Which is how we get Barbra Streisand.

Two years ago this week, I was honored to invite our 41st President and First Lady to my first ever concert in Texas. They came to my dressing room before the show and we exchanged gifts. I’m glad he and Barbara are together again. RIP. 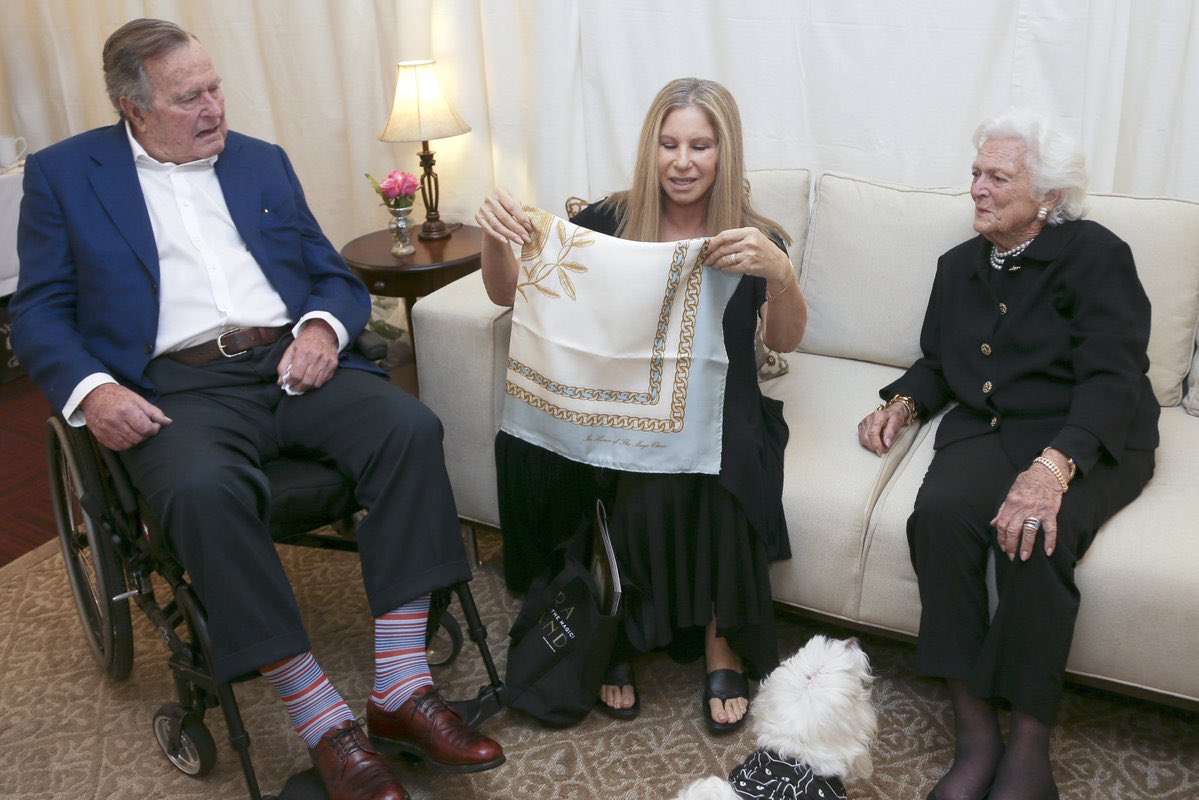 I'm so glad you made nice, Babsy.

Let's see when did you do your live concert again?  Hmm, September 1986.  Why again?  You were so scared to perform live but you were more scared about what might happen to our planet if the Reagan-Bush years continued into Bush years, remember now?

Remember any of the crap you said at the time?

The reality of War Criminal George H.W. Bush does not get "kinder and gentler" if you just zoom in to his domestic activities.  He campaigned on racism (the Willie Horton ads) and he campaigned on sexism.  He especially campaigned on sexism because he had the 'wimp factor' issue to overcome.  From Susan Faludi's BACKLASH: THE UNDECLARED WAR AGAINST AMERICAN WOMEN:

Rather than meeting the demands of women, the GOP men struck macho stands that they hoped would impress their own sex.  Bush hoped especially to prove his manly mettle to members of the press corps, who seemed as obsessed with the "wimp factor" as the male politicians they were covering.  "I get furious," Bush assured them.  "I go ballistic.  I really do and I bawl people out.  Of course, everyone's running for cover."  He even predicted, more wistfully than assertively, "Maybe I'll turn out to be a Teddy Roosevelt."
During the race, Bush's campaign managers dismissed questions about women's rights; they were too trivial to warrant comment, they said.  "We're not running around and dealing with a lot of so-called women's issues," Bush's press secretary indignantly told the New York Times.  When Bush summoned a group of elected officials to advise him during the campaign, only one was a woman.  While the candidate claimed that opposition to abortion was a cornerstone of his campaign, he didn't give this critical concern of women's much apparent thought.  When asked in a televised debate if he was "prepared to brand a woman a criminal for this decision," he said, "I haven't storted out the penalties."  His one seeming nod in the direction of working women's needs during the campaign was a penny-ante child care proposal that would give the poorest working families about $20 a week in tax breaks.  This pocket change was supposed to pay for basic child care that, on average, costs four times as much.  In the end, the Bush campaign's only real gesture to women was,incredibly, the selection of Dan Quayle.  His youthful blond looks, Republican leaders told journalists, would surely charm the ladies.

I'm sorry, unlike Barbra I don't support abortion rights one moment and, the next, shed tears and offer praise for a man who tried to destroy women's rights.  George H.W. Bush was despicable.   The April 1988 and April 1992 abortion right marches in DC?  We had to take to the streets to push back against Poppy Bush and all the other sickos who thought they could control women's bodies.


Some women were repeatedly targeted by Poppy Bush.  This was especially true if the women were women of color and/or gay.  Kevin Naff (WASHINGTON BLADE) remembers how homophobic Poppy was:


There’s nothing more galling than revisionist history and last weekend’s reactions to the death of former President George H.W. Bush brought an onslaught of it to many social media feeds and, more predictably, to mainstream media.
I was stunned to see my own feeds filled with tributes to the 41st president — some written by gay men. And on World AIDS Day, no less.
Even the Advocate — once a leading critic of the Reagan-Bush administrations — joined this chorus of glossing over Bush’s anti-LGBTQ record. In an Advocate story posted on World AIDS Day about Bush’s death, the word “AIDS” appears just once in a reference to Reagan. The headline describes Bush as “no enemy of LGBTQ people.”

Gay former Rep. Barney Frank, whose 32-year tenure in Congress included the George H.W. Bush administration from 1989 to 1992, told the Washington Blade in an interview Saturday the late former president “was bad” on LGBT rights and “wouldn’t do anything” to advance them.
“I asked him, for example, to rescind the Eisenhower rule that said we couldn’t get security clearances,” Frank said. “He refused to do it. Bill Clinton did a few years later.”
Frank also said Bush refused to roll back military’s ban on gay service members, which was administrative and not statutory in the days before the “Don’t Ask, Don’t Tell” law of 1993.
“Bush was simply unsupportive on any issue,” Frank added.
[. . .]

Larry Kramer, a longtime activist against HIV/AIDS, was succinct in response to a Blade email inquiry on whether Bush deserves credit for signing the Ryan White Care Act into law.
“I will not give him credit for anything,” Kramer said. “He hated us.”

Poor Barbra Streisand.  Yet again, Larry Kramer's telling truths and Babsie's hedging her bets.  One stands for LGBTQ rights and the other just uses gays to try to prop up her dying career.


Sometimes it's as basic as you tell the truth or you lie.  You stand up or you whore.  As Rose says in Jane Smiley's A THOUSAND ACRES (Michelle Pfeiffer gives an incredible performance as Rose in the film version which recently came out on Blu Ray), "All that I have is that I saw.  I saw without being afraid and without turning away.  And that I didn't forgive the unforgivable."

Rose can make that claim.  Whores like Barbra Streisand cannot.

More than any other Americans, the Bush Crime Family destroyed the country of Iraq and left so many people damaged.  Raya al-Jadir (INDEPENDENT) explores realities for the disabled and challenged in Iraq:

Years of wars, economic sanctions and corruption have dominated life in Iraq and contributed greatly to the fact that the disabled community is simply not a priority for the government. Poverty rates in Iraq are on the rise, affecting 35 per cent of the population according to the ministry of planning, meaning many are unable to afford education or healthcare.

Official statistics indicate that there are more than 1.3 million disabled people in Iraq (3 per cent of the population); campaigners however believe the real number is three times that. Although Iraq is party to the UN Convention on the Rights of Persons with Disabilities, media activist Ali Adil says: “In Iraq, many persons with disabilities continue to suffer from marginalisation and lack of access to their basic rights, in addition to community discrimination.”
On paper, every disabled person in Iraq is in receipt of a financial allowance regardless of whether the person is in employment or not – this amounts to approximately £66 a month. The stipend depends on the assessed severity of the person’s disability and to qualify Iraqis have to go through various consultations and medical examinations. As one activist who works with the British Council in Iraq informed me, “This long and bureaucratic system is almost 'disabling' the disabled person.”
Specialist care and services are either inaccessible or non-existent. Families often choose to home school their children in an effort not to send them to mainstream schools which are ill equipped to provide support or tackle discrimination.

Accessing healthcare has also become out of reach for many who cannot afford to pay. Rahma, a four year old girl, has phenylketonuria (PKU) a genetic condition that can lead to a build-up of the amino acid phenylalanine, which untreated can lead to brain damage and seizures. A protein-limited diet and supplements can prevent serious build ups, but these are not available in Iraq; her mother has to order it from abroad costing her more than £400 per month.


Here's a cold hard reality, the Iraqis above?  They didn't get 30 minutes of airtime over the weekend but Poppy Bush got non-stop praise on Saturday, Sunday, Monday and it will continue today.  It's an informercial selling War Criminals and war.  And useless whores like Barbie Streisand -- now 92% plastic thanks to all the fillers in her face -- will rush to identify with the criminals.  Barbara is not of the people and if you missed that, while she was promoting her album (Sour) WALLS, she sat down for an interview and explained why so many Republicans saw her in concert -- "They're the only ones who can afford the tickets!"  She thought that was funny.  She claims to be a Democrat, she claims to be a feminist, she claims to love her fans.  But she's perfectly fine with charging outrageous prices that guarantee only the very wealthy can see her.


Corruption, it inflicts more than just governments.  But it does inflict governments -- the US, certainly, and it's puppet Iraq.

At the end of October, Adil Adel al-Mahdi was moved from prime minister-designate to prime minister despite his inability to form a full Cabinet.  He still doesn't have a full Cabinet, despite constantly promising 'next week.'  John Davison and Ahmed Rasheed (REUTERS) report:


The two largest parliamentary groupings to emerge after the vote in May - one led by populist cleric Moqtada al-Sadr and the other by Iranian-backed militia leader Hadi al-Amiri - formed a tacit alliance in October when they picked a president and approved 14 out of 22 cabinet ministers.
But since then there has been stalemate, mainly over the empty interior ministry post dominated for years by allies of Amiri, who are backing the former head of a paramilitary force supported by Tehran. Sadr meanwhile says no one with a political affiliation should get the post.
A vote in parliament to fill the vacant ministries in Prime Minister Adel Abdul Mahdi’s cabinet has been repeatedly put back.


RUDAW reports that al-Mahdi's finally come up with choices for his eight empty Cabinet posts:


But nominees require a vote in Parliament.

Hassan Hadad‏ @Abufellah 3h3 hours ago
PM @AdilAbdAlMahdi has arrived at the parliament building. On the agenda is a vote on the remaining 8 cabinet positions, including Defence & Interior. #Iraq
2 replies4 retweets7 likes

Altaf Ahmad‏ @altafahmad_tv 3h3 hours ago
Breaking: #Iraqi MPs say only six out of the eight remaining ministers will be voted on today; the two ministeries excluded are the Defense and Interior Ministries due to discord over the candidates #Iraq_Cabinet #Adel_AbdulMehdi #Iraq_Parliament #Iraq #Baghdad
0 replies0 retweets0 likes 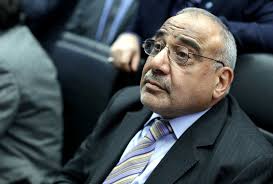 Meanwhile, the flooding continues in Iraq.

Nearly 85 families have fled their homes in various areas of the northern city of Mosul over the weekend, following two days of flash floods, an Iraqi civil defence official said on Monday.
The heavy rain paralysed traffic, causing widespread disruption, with schools and offices closed.


Six bridges and 300 tents in the Nimrud refugee camp were reportedly damaged as a result of the heavy rainfall.

amsiiraq‏ @amsiiraqEn Dec 2
Local sources: Floods caused by the heavy rains that hit Iraq recently; have destroyed more than (340) tents for the displaced people in (Hammam Alalil)Camp south of Nineveh, hence dozens of families of Mosul are returning to the camps in Erbil in the north of the country. 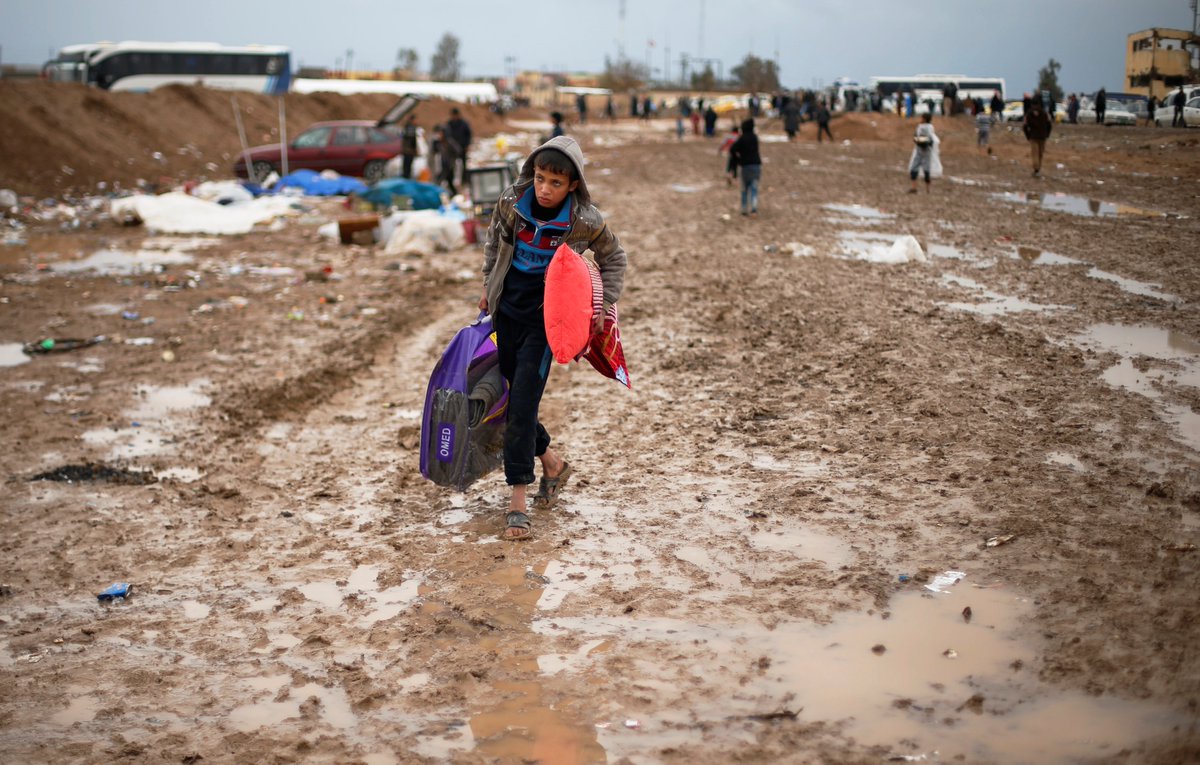 The Official Jody Watley Website
Jody Watley Set To Release Like A Holiday Remix.
20 hours ago
Posted by Ruth at 9:01 PM