They grow them stupid in Iowa?

I have to wonder because of this.

Do you see the problem?

She types "WaPo notices" but she is linking to THE NEW YORK TIMES.

The election was not hacked.

People need to grow up and realize how crazy they sound.

They drag Hillary Clinton further down with their crazy.

And a teacher who does not know the difference between THE NEW YORK TIMES and THE WASHINGTON POST probably should not be teaching anyone.

The UN’s chief adviser on the prevention of genocide, Adama Dieng, issued a separate statement condemning the “horrendous situation faced by civilians caught up in the offensive to retake the city from ISIS,” while the UN High Commissioner for Human Rights Zeid Ra’ad al-Hussein charged that “civilians—who should be protected at all times—are paying an unacceptable price.”
In other words, a war crime of monstrous dimensions is unfolding in plain sight, while its perpetrator, US imperialism, enjoys complete impunity.
On its Twitter account, the local monitoring group, Raqqa is Being Slaughtered Silently, posts photographs daily of babies, children, men, women, the elderly and entire families perishing under the US bombs, missiles and shells, along with the utter devastation of the city’s residential neighborhoods.
The siege of Raqqa follows close on the heels of the even larger scale war crime consummated this summer in the northern Iraqi city of Mosul, once the country’s second largest, where the death toll from nine months of bombing and shelling by the US and its Iraqi government allies has been estimated as high as 40,000.
All of this carnage is virtually blacked out of the US media, which only last year was engaged—in close coordination with the US government—in a full-throated campaign of feigned moral outrage over the Russian-backed offensive by the Syrian government to retake eastern Aleppo from Al Qaeda-linked and US-armed Islamist “rebels.”

The western media looks the other way repeatedly, over and over.

It allows Americans to treat people as numbers.

And numbers will never have the same standing as people.

So when someone parrots the US government line, that person gets a profile (brief) in the western media but the Iraqi who is rightly outraged at what is done to his/her land is silenced.

Baghdad, 01 September 2017 – A total of 125 Iraqi civilians were killed and another 188 injured in acts of terrorism, violence and armed conflict in Iraq in August 2017*, according to casualty figures recorded by the United Nations Assistance Mission for Iraq (UNAMI).

The number of civilians killed in August (not including police) was 116, while the number of injured (not including police) was 181.
Of those figures, Baghdad was the worst affected Governorate, with 180 civilian casualties (45 killed, 135 injured). Ninewa Governorate followed with 36 killed and 18 injured, and Salahadin had 4 killed and 24 injured.
UNAMI has not been able to obtain the civilian casualty figures from the Health Directorate in Anbar.
The United Nations Special Representative of the Secretary-General (SRSG) for Iraq, Mr. Ján Kubiš, condemned the targeting of civilians by the Daesh terrorists.
“Daesh terrorists have shown absolute disregard for human life. Shamelessly, the terrorists have indiscriminately targeted civilians, most recently in Baghdad earlier this week, to avenge their losses on the battlefield as they lost control of Tal Afar. However, the patience and resilience of the Iraqi people have defeated the terrorists' aim in breaking their unity."
*CAVEATS: In general, UNAMI has been hindered in effectively verifying casualties in conflict areas; in some cases, UNAMI could only partially verify certain incidents. UNAMI has also received, without being able to verify, reports of large numbers of casualties along with unknown numbers of persons who have died from secondary effects of violence after having fled their homes due to exposure to the elements, lack of water, food, medicines and health care. Since the start of the military operations to retake Mosul and other areas in Ninewa, UNAMI has received several reports of incidents involving civilian casualties, which at times it has been unable to verify. For these reasons, the figures reported have to be considered as the absolute minimum. UNAMI has not been able to obtain the civilian casualty figures from the Anbar Health Department for this month.
****************
For more information, please contact: Mr. Samir Ghattas, Director of Public Information/Spokesperson
United Nations Assistance Mission for Iraq, Phone: +964 790 193 1281, Email: ghattass@un.org
or the UNAMI Public Information Office: unami-information@un.org


On undercounts, the US government has updated their civilian kills in Iraq.  David Alexander and Bernadette Baum (REUTERS) report, "The U.S.-led coalition fighting Islamic State militants said on Friday it had confirmed another 61 likely civilian deaths caused by its strikes in Iraq and Syria, raising to 685 the number of civilians it has acknowledged killing since the conflict began."

So there you have the updated undercount.

It's not a person.

And the government's counting on no one thinking for themselves, imagining what the media won't tell you, these were families, these were friends.

So lucky to have the US involved in killing them.

"Liberation" efforts to a lot of Sunnis in Iraq look like genocide.

But we're not supposed to talk about that either, are we?

Next stop on the so-called 'liberation' train?


Why might the Islamic State have been able to get a foothold in Hawija?


How about Nouri's slaughter.


The April 23, 2013 massacre of a sit-in in Hawija which resulted from then-prime minister (and forever thug) Nouri al-Maliki's federal forces storming in.  Alsumaria noted Kirkuk's Department of Health (Hawija is in Kirkuk)  announced 50 activists have died and 110 were injured in the assault.   AFP reported the death toll eventually (as some wounded died) rose to 53 dead.   UNICEF noted that the dead included 8 children (twelve more were injured).

Where was the outrage in the US?

Where was the world's press?

Where was the world's attention?

Barack and Samantha Power were convinced Nouri was the only way to get what they wanted from client-state Iraq.

So they gave him a second term as prime minister -- after voters rejected him -- in 2010.

He used that second term to attack reporters and activists.

And no concern from the world.

As Sunnis were targeted and slaughtered, it's no surprise that the Islamic State rose up.

No surprise, and check the archives, we said it would.

We said that when the people have used the ballot box to try to achieve fairness and that's failed, when they've turned to their elected officials and that's failed (the effort to hold a no-confidence vote -- all measures were met so fat ass Jalal Talabani invented a new one at the request of Joe Biden), when you've turned to peaceful protests and that fails, the options are limited.  Violence becomes one of the options.

The Islamic State appeared when Nouri's goons were attacking peaceful protesters staging a sit-in on the highway between Baghdad and Anbar.

The refusal to grasp the rise of the Islamic State is part of the blindness imposed by the press.

Rule 1: The US can never be in the wrong.

Rule 2: If we explain that the US caused violence we'll have to also take this plan away.

Hayder al-Abadi is tolerated by the US government because they hope he will meet US objectives.

He oversaw War Crimes throughout his tenure.

Not just the attacks on civilians by the military when 'liberating' various locales.

He oversaw the bombing of civilian neighborhoods in Falluja.

KUNA reports, "Iraqi jetfighters dropped Thursday leaflets over Hawija, informing people to get ready for an imminent operation to drive" ISIS "out of the city. [. . .]  The leaflets urged residents to keep away from the IS militant assembly posts as well as the buildings and areas they control."

Who can figure out what's missing?

They didn't tell the civilians in Mosul to leave either.

In what may be an improvement, the leaflets in Hawija do not appear to tell the residents to stay in the city -- that's what happened in Mosul.  They were warned not to leave.

Adam Schiff‏Verified account @RepAdamSchiff  Aug 30
I'm introducing an amendment to prohibit payment of @SecretService funds to Trump businesses. @POTUS should not profit off of the Presidency 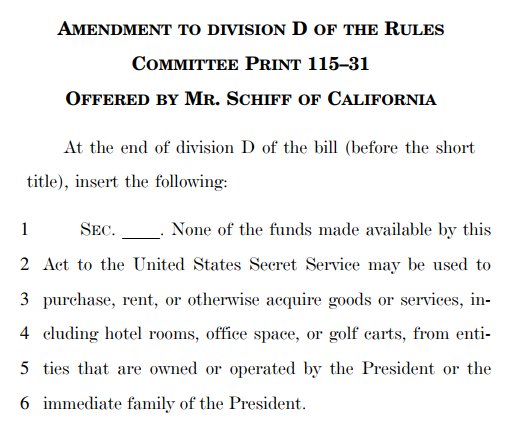 Hey, Adam, you do realize that each of Hillary's big book tours is made possible because of the Secret Service?  Possibly when people are raking in millions, the US tax payer shouldn't be footing the bill?  So you need to change that proposed bill to president or former president.

As anyone with even a basic grasp of publishing knows, Hillary's tours are costly -- or would be if either she or the publisher had to arrange for security for every stop on the tour.

Since she's been paid millions for these books -- that others write and she puts her name to -- the question is why are we paying the Secret Service to protect her on these tours?

We'll close with this from WSWS: